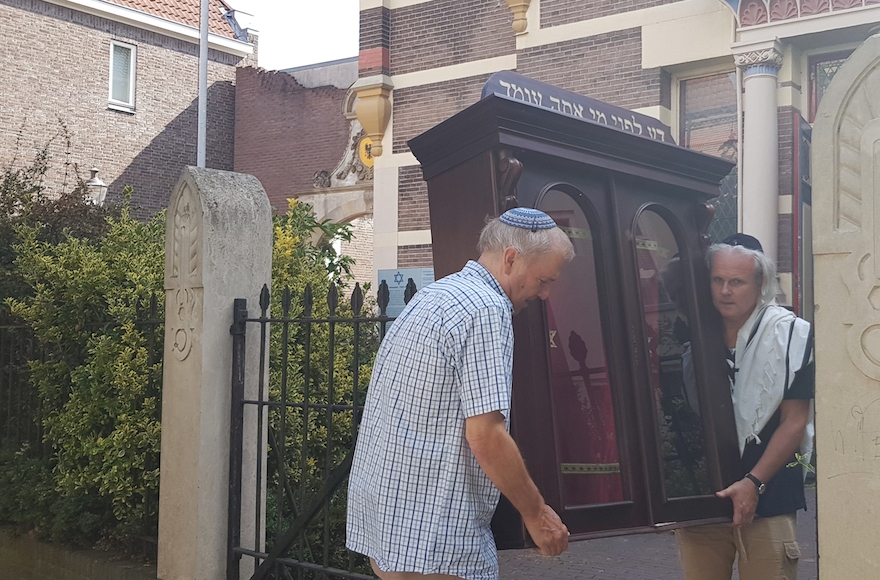 Tom Furstenberg, right, and a member of the Jewish community of Deventer carries out the Torah ark of their former synagogue, July 30, 2018. (Cnaan Liphshiz)
Advertisement

DEVENTER, Netherlands (JTA) — The Jewish community of this Dutch city was evicted Monday from its former synagogue in what members said was the first such occurrence in years in the kingdom.

Members of Beth Shoshanna, a Masorti/Conservative Jewish congregation of approximately 30 people, packed up and loaded into a van their Torah scroll and other scripture, as well as other items used for worship and furniture. The move followed a legal fight against the building’s new owners, who are seeking to turn it into a restaurant.

“It’s a very heavy feeling that this thing can happen here in 2018,” said Tom Furstenberg, the community’s chairman.

His community had been told to move out by the office of Ayhan Sahin, a Dutch-Turkish developer and owner of several eateries, who in January bought the building housing the Great Synagogue of Deventer with a partner. Last week, the city blocked his plan to open an eatery in the 125-year-old synagogue. But as the owners, Sahin and his associate can still determine who has access to the building and have asked the congregation to move out, according to Sanne Terlouw, a member of the congregation.

The community has found a new home in the nearby municipality of Raalte.

“We will continue. But this means the end of centuries of Jewish life in Deventer itself,” Terlouw said.

A dozen community members sang songs in Hebrew, including “Am Yisrael Chai” and “Kol Ha’Olam Kulo,” before leaving the synagogue. Furstenberg, wearing a tallit, or prayer shawl, blew the shofar one final time before leaving. He helped carry out the portable ark holding the Torah scrolls.

Several Dutch journalists documented the move, which Terlouw and Furstenberg said was the first such case in years.

The synagogue on Gol Street, a tall building in the neo-Moorish style, was built in 1892. Of the 590 people who in 1942 were registered as Jewish residents of Deventer, 401 were murdered in the Holocaust. The depleted community could not afford the building’s upkeep and sold it in 1951 to a Christian church group, which installed a massive pipe organ in the spacious interior.

In 2010, Beth Shoshanna got permission from the church group to use the space as a synagogue. The Jewish congregation installed a Torah ark and scroll, and held regular services there until the sale. Attempts to raise enough funds to buy the synagogue from the church did not succeed.

In 1940, in the days following the German invasion of the Netherlands, members of the Dutch National Socialist Party ransacked the Deventer synagogue as police stood by, destroying the interior.