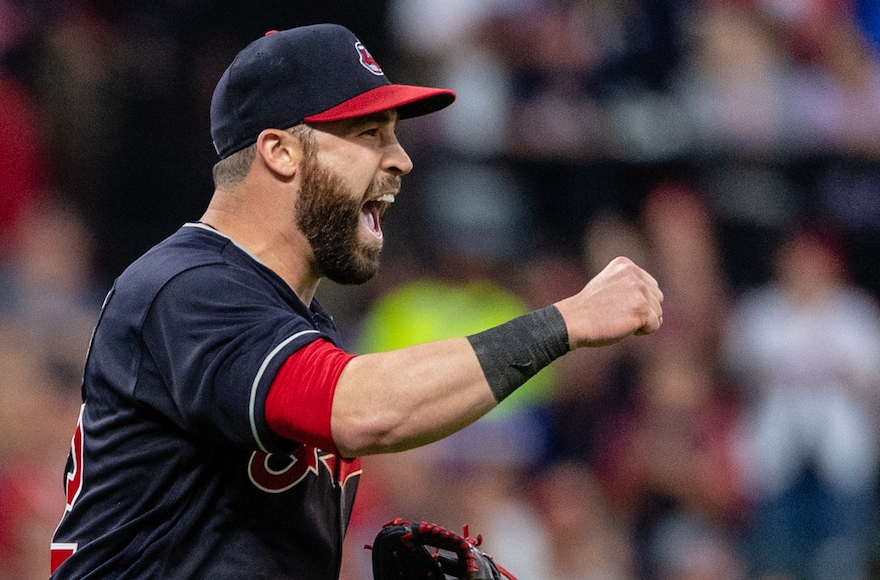 Jason Kipnis celebrating in a game against the Oakland Athletics at Progressive Field in Cleveland, July 6, 2018. (Jason Miller/Getty Images)
Advertisement

(JTA) — Cleveland Indians second baseman Jason Kipnis may wear a cross around his neck, but his dugout celebrations for home runs are purely Jewish.

Kipnis hit a solo shot Monday against the Minnesota Twins in the Tribe’s 10-0 victory. His teammates greeted him by lifting him off the ground and chanting “Hey, hey, hey!” In a post-game interview with Sportstime Ohio, he called the unusual dugout celebration his “Hava Nagila” chair.

“My chair! My ‘Hava Nagila’ chair baby! I had two open arms waiting for me and I was like, oh you guys remembered,” Kipnis said.

Look what the boys BROUGHT BACK!!! pic.twitter.com/dhcFDDLR9o

His “Hava Nagila” celebrations were noted as well during the 2016 World Series, when he belted a three-run homer in Game 4 against the Chicago Cubs and his teammates picked him up and danced him around the dugout.

While Kipnis is a practicing Roman Catholic, his father is Jewish and he reportedly grew up self-identifying as Jewish.

The Jewishbaseballnews.com website had listed him as Jewish from 2008, when he was a star outfielder for Arizona State University, until his 2011 debut with the Indians, when fans noticed he was wearing a crucifix. A team spokesman then confirmed that Kipnis was now Roman Catholic.