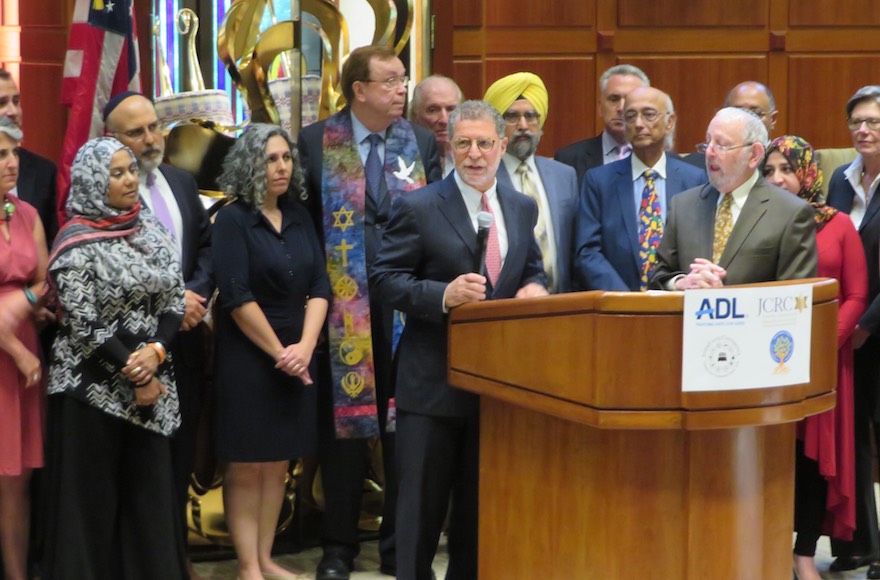 Rabbi Bruce Lustig of Washington Hebrew Congregation is surrounded by clergy of multiple faiths as he helps launch a weekend of counterprotests against white supremacist marchers in Washington, D.C., Aug. 10, 2018. (Ron Kampeas)
Advertisement

WASHINGTON (JTA) — Jewish groups in the Washington, D.C., area launched a weekend of counterprotests and teach-ins ahead of a planned white supremacist commemoration of the deadly march last year in Charlottesville, Virginia.

The Jewish Community Relations Council of Greater Washington and the Anti-Defamation League joined a number of interfaith groups on Friday in leading a teach-in at Washington Hebrew, a Reform synagogue in the city’s Northwest sector. Counterprotesters came from across the country and filled the synagogue’s large sanctuary.

“In the end, it doesn’t matter whether the Unite the Right organizers bring 10, a hundred or even a thousand people to our nation’s capital for their hate fest,” said Ronald Halber, the JCRC’s director, at a news conference attended by clergy from various faiths. “They have accomplished nothing except being a stimulus for a reaffirmation of unity, love and solidarity throughout our city and region — the exact opposite of what they hoped to inspire.”

A number of speakers drew a direct line between the white supremacists and the administration of President Donald Trump.

Trump has been accused of stoking the racism with charged statements about Hispanics, Muslims and blacks. He also equivocated last year when asked to condemn the Charlottesville rally, which included neo-Nazi gangs beating counterprotesters and a deadly car ramming on counterprotesters that killed one woman and injured at least 20 people.

The Unite the Right organizers sought to reconvene in Charlottesville but were denied a permit. Instead they were granted permission to meet at Lafayette Park, across the street from the White House, and will gather there 5-7 p.m. Sunday. A large number of counterprotests are planned.