On Charlottesville anniversary, Trump condemns ‘all types of racism,’ Ivanka homes in on white supremacy 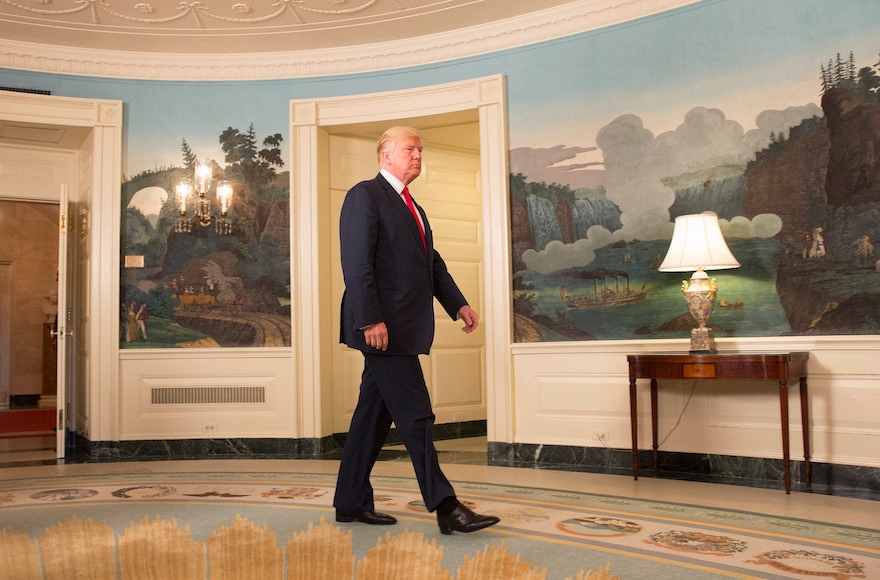 WASHINGTON (JTA) — President Donald Trump marked the anniversary of the deadly neo-Nazi march in Charlottesville, Virginia with a tweet that did not single out white supremacists as responsible, while his Jewish daughter named the racist ideology and condemned it.

“The riots in Charlottesville a year ago resulted in senseless death and division,” Trump said Saturday on Twitter, without noting that most of the violence, including a car ramming that killed counterprotester Heather Heyer and injured at least 20 others, was committed by neo-Nazi marchers.

The tweet was on the eve of the Aug. 12 anniversary.

“We must come together as a nation,” he said. “I condemn all types of racism and acts of violence. Peace to ALL Americans!”

The riots in Charlottesville a year ago resulted in senseless death and division. We must come together as a nation. I condemn all types of racism and acts of violence. Peace to ALL Americans!

The Tweet appeared to echo his equivocations after last year’s violence when he blamed “many sides” for the violence and said there were “very fine people” on both sides. Those statements drew widespread condemnation from Jewish leaders, Democrats and Republicans.

Ivanka Trump, a senior adviser to her father and an observant Jew, posted a thread of tweets just after Shabbat in which she singled out the white supremacists and neo-Nazis.

“While Americans are blessed to live in a nation that protects liberty, freedom of speech and diversity of opinion, there is no place for white supremacy, racism, and neo-Nazism in our great country,” Ivanka Trump said.

2:3 While Americans are blessed to live in a nation that protects liberty, freedom of speech and diversity of opinion, there is no place for white supremacy, racism and neo-nazism in our great country.

Ivanka Trump and her husband Jared Kushner, who also advises Trump, reportedly pressured her father to single out white supremacists and neo-Nazis immediately after the violence last year, and he did — and then reversed himself within a day, once again blaming both sides.

She has more recently staked out a difference with her father on his repeated attacks on media as the “enemy of the people,” saying she rejects the appellation.

Trump earlier this week returned on Twitter to one of his favorite themes, calling on the NFL to penalize football players who kneel during the national anthem to protest police violence against blacks and other inequities.

Mitt Romney, the Republican presidential nominee in 2012 who is now running for Senate in Utah, took Trump to task on Friday for his comments last year.

“The President opined that there were good people in both groups, a statement for which he was widely criticized,” he said on his website. “My view — then and now — is that people who knowingly march under the Nazi banner have disqualified themselves as ‘good people’.” Romney has at times been a caustic critic of Trump, who is also a Republican.

The white supremacists who planned last year’s rally are reconvening Sunday in Washington, D.C. after failing to obtain a permit to appear in Charlottesville. Counterprotests are planned, and the Jewish community in the Washington area has taken the lead in helping to plan them.

The state of Virginia and the city of Charlottesville have declared a state of emergency in the city to prevent violence this year.