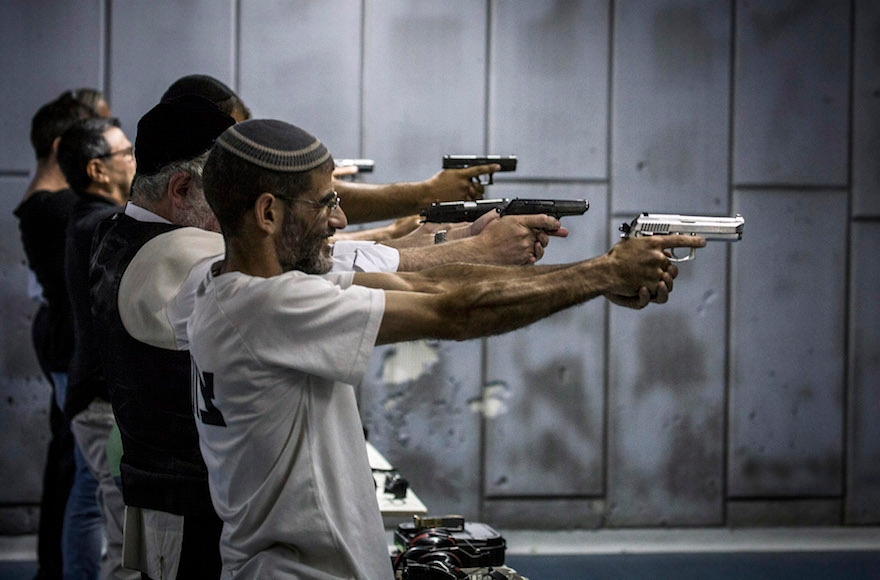 JERUSALEM (JTA) — Israel eased restrictions on gun ownership Monday in a move intended to increase the number of weapons in circulation, allowing Israelis to more effectively respond to Palestinian terrorism.

According to the Israeli news site Ynet, the Ministry of Public Security’s new licensing policy will open up gun ownership to hundreds of thousands of veterans, although they will still be required to pass the same rigorous screening procedures in place. Only those living in the West Bank or working in professions that required weapons, such as security guards, had been eligible for ownership.

“Many civilians have saved lives during terror attacks,” Minister of Public Security Gilad Erdan was quoted as saying. “In an era of lone-wolf terror attacks, the more armed and trained civilians there are, the larger the chances of disrupting an attack and decreasing casualties.”

This is not the first time that Erdan has worked to loosen Israel’s strict gun laws. In the wake of a series of lone wolf terrorist attacks carried out by Palestinians across Israel in 2015, he allowed local authorities in what are deemed “high priority” areas to grant weapons permits rather than require applicants to deal directly with his ministry. He also expanded the number of areas that fell under that designation.

“Citizens with firearms training are a multiplying force for the police in their fight against terrorism and therefore I will take measures to ease the restrictions at this time,” he said at the time.

Responding to Erdan’s announcement on Monday, Meretz chairwoman Tamar Zandberg tweeted sarcastically that “there is no doubt that what is missing in Israel is more weapons in the streets.”

“It is amazing to see how the Ministry of Public Security is solving problems, instead of dealing with the huge quantities of illegal weapons that are circulating in the streets and endangering human life, it is simply expanding the number of weapons licenses,” she wrote. “We are speaking about a tool of death whose use needs to be minimized as much as possible, especially for civilians.”