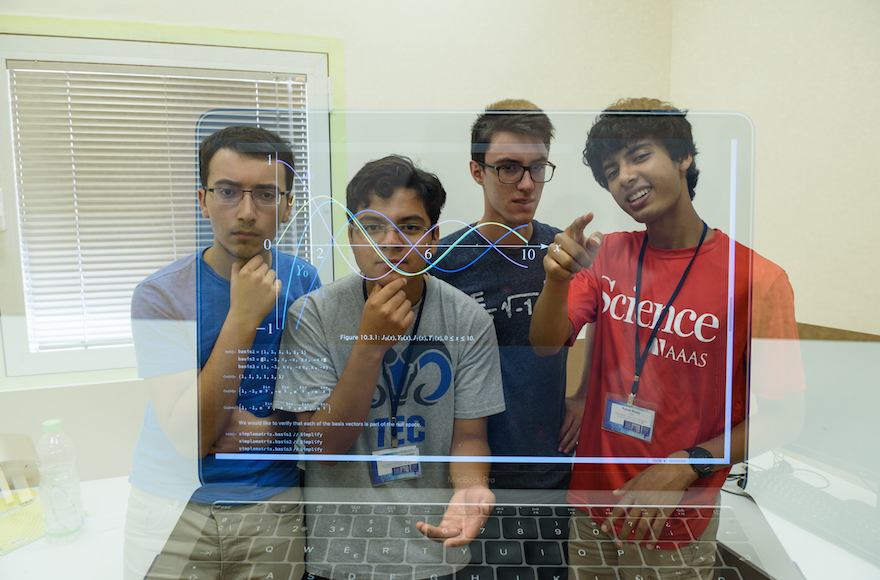 Lior Benizri of Brussels, Ramon Castaneda of Mexico, Aleix Segui of Barcelona and Karna Morey of Durham, North Carolina, left to right, tackle a problem in a physics lab at the Weizmann Institute of Science. (Weizmann Institute)
Advertisement

This story is sponsored by the American Committee for the Weizmann Institute of Science.

REHOVOT, Israel — One hot day this summer, 18-year-old Aleix Segui of Barcelona walked around an academic campus in this central Israeli city wearing a gray T-shirt with a mathematical equation on the front.

The meaning of the shirt’s cryptic message would be lost on most people, but Segui’s new friends in a unique Israeli summer science program easily got the esoteric mathematical joke.

Among them was Miyu Terashima, a 16-year-old originally from Japan who now lives in Hong Kong.

Segui and Terashima are two of 73 recent high school graduates who came to Israel this summer to participate in a hands-on scientific research program at the Weizmann Institute of Science, the Dr. Bessie F. Lawrence International Summer Science Institute, or ISSI.

Working in small groups under the tutelage of more than two dozen professors, post-doctoral students and graduate students, participants spend much of their time conducting experiments or developing scientific models. They help advance their mentors’ research projects, and their findings sometimes are incorporated into papers presented at academic conferences or published in scientific journals.

The four-week program is highly competitive. Each year about 70-80 students from around the world, both Jews and non-Jews, are accepted. The largest delegation – about 20 students – comes from the United States, but participants also have come from South Korea, Japan, Turkey, Brazil, Mexico, Argentina, New Zealand, Australia, Canada, European countries — and Israel. The program has more than 3,000 alumni.

The international mix is a huge draw for the students, many of whom have never visited Israel.

Soyeun Yang of Boulder, Colorado, attended the program in 2012 after learning about it from ISSI alumni she met at the Intel International Science and Engineering Fair, where she presented chemistry research related to tuberculosis.

The participants don’t spend all their time in the lab or in front of computer screens. They also attend lectures, participate in cultural and social events, and go on field trips to different parts of Israel.

Sophia Haeussler, 16, of Germany, said she was pleased to discover that Israel isn’t all a big desert, as she expected.

Ramon Castaneda, 18, of Mexico, said he was glad that daily life in Israel is not the “war zone” his parents feared.

“By being here, I’ve learned that the media is biased. It tells only one side of the story,” he said. “You need to be here to know the real situation.”

Now in its 50th year, ISSI was founded by the late Dr. Bessie Lawrence, a former deputy superintendent of Chicago’s public school system. Her goal, she said, was “to give bright, talented kids a future in science.” In 1969, she and several friends created an endowment that launched ISSI, also known as “The Bessie program.”

The program is conducted in English and is free for participants; all costs are covered by scholarships from Weizmann donors. The American Committee for the Weizmann Institute of Science actively raises funds to promote Lawrence’s legacy and support the program.

“The idea was to create a direct interface between active scientists with mentoring potential and enthusiastic students who might choose to follow in their mentors’ footsteps and become research scientists,” said Dr. Dorit Granot, director of international programs for the Davidson Institute of Science Education at the Weizmann Institute. “It quickly became an international forum for the best and the brightest science-oriented youth from around the world.”

After three weeks of being based at the Weizmann campus, the students spend their final week of the program in the Judean and Negev deserts with expert guides from the Sde Boker Field School. There they study the wildlife, ecology, archaeology and history of the surrounding area through extensive hikes, field experiments, wildlife observation and demonstrations. 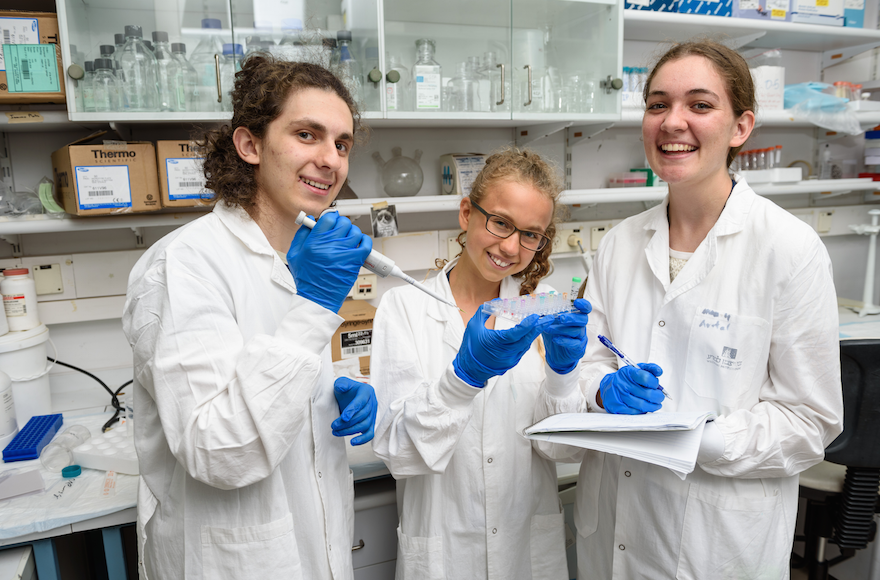 From left, Dvir Avnon-Klein of New York, Sophia Haeussler of Germany and Elisheva Eisenberg of Montreal work together in an immunology lab at the Weizmann Institute of Science. (Weizmann Institute)

Castaneda, who concentrated on robotics in high school, said he was happy that his ISSI assignment was with a group working on theoretical physics. He and program participants from Spain, Belgium and North Carolina worked to advance the research of their mentor, Avner Karasik, a doctoral student in high-energy theoretical physics.

“These kids are very talented, smart and motivated,” Karasik said. “They know things I didn’t know until the end of my bachelor’s degree or early into my master’s. They are coming up with such good results that we will have a paper soon.”

Elisheva Eisenberg, an 18-year-old from Montreal, was teamed with New Yorker Dvir Avnon-Klein, 17, and Haeussler of Germany in an immunology research lab. They studied plasmacytoid dendritic cells, which play an important role in autoimmune diseases.

“I’ve never met people from so many different countries that have a common love for science and research,” Eisenberg said.

Down the hall, another group of students did research on multiple myeloma, a cancer that causes plasma cells to accumulate in the bone marrow.

“We are exploring the microenvironment to see how molecules interact with the cancer cells,” said Luiza Coutinho, 18, of Brazil.

Even for outstanding students with prior research experience, working in Weizmann’s real-lab conditions could feel daunting, according to Terashima.

“You get the skills to evaluate every action in the lab,” she said. “You’re facing challenges and limitations, and you learn to overcome.”

The mentors play an important role in helping the young researchers cope with failure, and stay focused and motivated, said Granot, herself an expert in molecular imaging with a doctorate from Weizmann.

“We’ve all experienced it ourselves,” she said. “We can support the students by giving them perspective and tools for dealing with their frustrations.”

Karna Morey, a 17-year-old from Durham, North Carolina, who will head to MIT this fall, said he was struck by the collaborative nature of the work.

“This is one of the very few opportunities for people my age to do research with people from all over the world,” he said. “All four of us in our group have different backgrounds, and we each bring something different to the table. There’s real strength in diversity.”

Most program alumni became scientists or doctors, according to organizers, but some pursue other career paths. Yang, who attended Dartmouth after spending her summer at ISSI doing cancer research, now works in management consulting in Boston. She says there are clear connections between her current profession, her love of science and her experience on the Weizmann program.

“Science deals with processes and provides a paradigm for solving problems. I work with data on a day-to-day basis,” said Yang, 23. “The purpose of ISSI is to work on research, but also to broaden your perspective and think about the science landscape across borders. It’s about using science to communicate.”