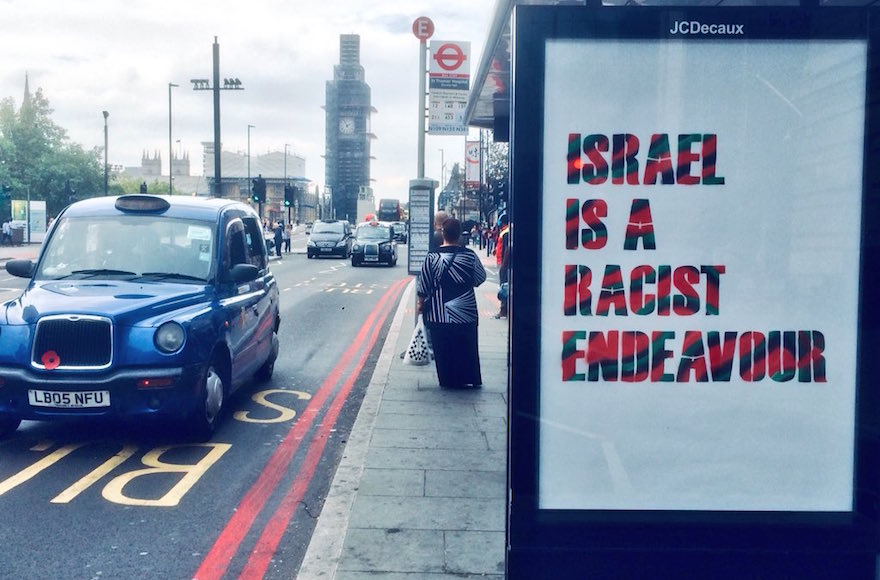 (JTA) — Posters saying “Israel is a racist endeavor” appeared on bus stops in London a day after Britain’s opposition Labour Party voted to accept the international definition of anti-Semitism, but with a free speech clause on criticizing Israel.

A section of the full International Holocaust Remembrance Alliance, or IHRA, definition of anti-Semitism states that “denying the Jewish people their right to self-determination, e.g., by claiming that the existence of a State of Israel is a racist endeavor” is an anti-Semitic act. Labour had initially omitted this example and three others from the definition it was going to approve earlier this summer.

On Thursday, London’s mayor ordered the signs to be taken down. It is not clear who hung the signs, though the London Palestine Action group posted photos of the bus stops on Twitter under the heading “Created by ethnic cleansing; maintained by ethnic exclusion. Israel is a #racistendeavour.”

Created by ethnic cleansing; maintained by ethnic exclusion. Israel is a #racistendeavour pic.twitter.com/xhJKL9jh9M

Transport for London told the London-based Jewish Chronicle through a spokesperson that the posters were “absolutely not authorized” by the public transportation authority or the advertising company.

“It is fly posting and therefore an act of vandalism which we take extremely seriously,” the spokesperson said. “We have instructed our contractors to remove any of these posters found on our network immediately.”

Over half of the British Jews surveyed between the ages of 35 and 54 responded that emigration is a serious consideration.

Some 51.8 percent of British Jews said they would not seriously consider leaving, and 9.7 percent responded that they did not know.

A former British chief rabbi, Jonathan Sacks, in an interview with the BBC on Sunday warned that Jewish people are making plans to leave Britain over fears of an anti-Semitic backlash precipitated by Corbyn.

The polling company Survation interviewed some 710 Jews in Britain, out of a population of about 25,000, between Aug. 12 and Sept. 4.