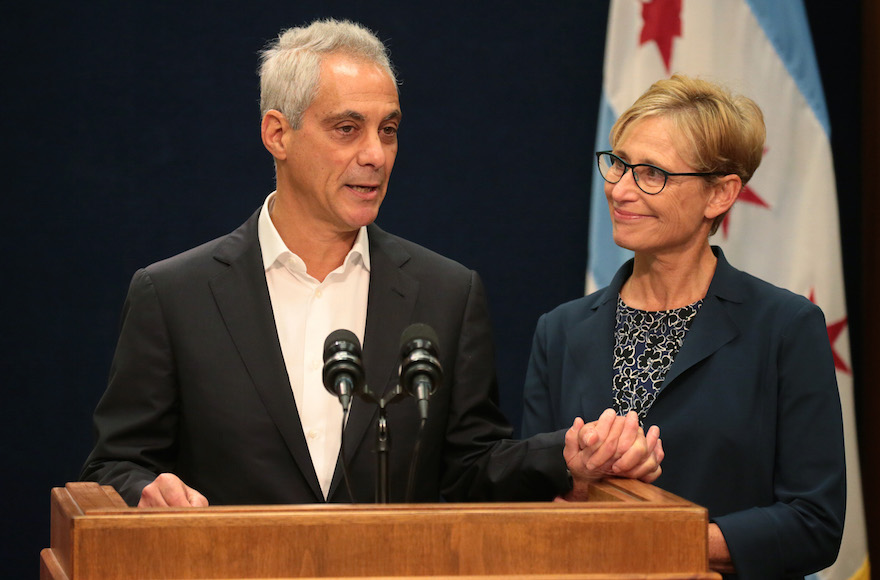 With wife Amy Rule by his side, Chicago Mayor Rahm Emanuel announces that he will not seek a third term in office at a press conference at City Hall in Chicago, Sept. 4, 2018. (Stacey Wescott/Chicago Tribune/TNS via Getty Images)
Advertisement

(JTA) — As Chicago Mayor Rahm Emanuel prepares to exit City Hall after eight years in office, his Jewish supporters tout his commitment to helping people and his record of economic development in the city.

His Jewish detractors, meanwhile, call out his closing of dozens of Chicago public schools and scandal in the city’s police department following the killing of an African-American teen by a white cop.

But they agree on one thing: The fact that he was the city’s first Jewish mayor was a non-issue either way. He hasn’t faced significant anti-Semitism, nor do his Jewish backers say they support him because of his religion.

“We’re living in an era where a city that has many different ethnic groups and minorities, and people feel very passionately about their group, can elect a white Jewish mayor,” said Rabbi Asher Lopatin, who led Emanuel’s Orthodox synagogue, Anshe Sholom B’nai Israel Congregation, for his first two years as mayor. “Deep down, we can put our differences behind us.”

Not that Emanuel has ever tried to downplay his Judaism. He was raised in an involved Jewish family, with an Israeli father, and has remained active in Jewish circles as an adult.

When he announced Tuesday that he wouldn’t seek a third term, Emanuel paid homage to his Jewish background.

“I want to thank my grandfather, who at the age of 13, took an enormous chance a century ago by immigrating here from Eastern Europe, fleeing the pogroms, to meet a third cousin he did not know in a city whose name he could not pronounce,” Emanuel’s announcement said. “In four congressional runs on the North and Northwest Sides — and in two races for Mayor — you cast aside old history and voted for a Jewish kid with the middle name Israel.”

In deciding to leave after two terms, Emanuel surprised a city with a history of strongman mayors. Emanuel, who stepped down as White House chief of staff for President Barack Obama to run in 2011, won re-election in 2015, though he was forced into a runoff. And he’s had a contentious tenure.

Emanuel expanded the city’s pre-kindergarten and lengthened its school day, but also led the largest bout of school closings in Chicago history and confronted a teachers’ strike. He renovated the city’s riverwalk, began an expansion of the airport and oversaw a spike in construction downtown, but gun violence has continued to plague the South Side.

And his announcement came in the shadow of a murder trial of a policeman who shot Laquan McDonald, an African-American teen, in 2014. The fallout from the shooting prompted a federal investigation of the Chicago PD, which found a pattern of discrimination.

“With respect to the beautification of the city, the day-to-day workings of the city, the mayor has done an outstanding job,” said Rabbi Capers Funnye of the Beth Shalom B’nai Zaken Ethiopian Hebrew Congregation on the South Side. Nevertheless, Funnye said he would grade Emanuel’s performance as a B- or C+.

Emanuel, 58, was born in Chicago to Jewish parents, including a father who served in the Irgun, a paramilitary Zionist militia in prestate Israel. His first, middle and last names are all Hebrew. He attended Jewish day school as a child and, in 1991, volunteered for a few weeks as a civilian on an Israeli army base. His brother Ezekiel is a prominent physician and bioethicist. Another brother, Ari, is a top Hollywood agent.

After serving in the Clinton White House in the 1990s, Emanuel was elected to Congress from Chicago’s North Side in 2002. He earned a reputation for pugnacity, and eventually rose to become chair of the House Democratic Caucus. In 2009, he departed Congress to serve as Obama’s first chief of staff.

While living in Chicago, Emanuel would attend services at Anshe Sholom and was an outspoken supporter of Israel. Steve Nasatir, president of the Jewish United Fund, Chicago’s Jewish federation, praised Emanuel as having done a good job in a difficult position.

“There’s no question that there was a sense of community pride in having a Jewish mayor elected in Chicago, coming from a family that was connected to the Jewish community,” Nasatir said.

But Nasatir said the federation’s relationship with this mayor wasn’t much different from its relationships with Emanuel’s predecessors — whether the powerful Richard Daley, who served for more than two decades, or Harold Washington, the city’s first African-American mayor.

His Jewish allies said Emanuel’s religion would express itself in the priorities he advanced, like trying to make the city more prosperous and improve its education system.

“He’s a very good man, he’s a committed, passionate man,” Lopatin said. “I know how deeply committed he is to doing good in society and making a difference.”

But that feeling is far from universal among Chicago Jews. Liberal activists say he didn’t help the schools, he gutted them. And they say his focus on economic development didn’t extend to the African-American communities of the South Side.

“Rahm was the furthest thing we’ve ever had from a Jewish leader, from a Jewish mayor, in the city,” said Tamar Manasseh, a Jewish activist who runs Mothers Against Senseless Killing, an organization combating gun violence on the South Side. “Rahm espoused no Jewish values whatsoever. He had a connection to a Jewish mother, but not to a Jewish God.”

Judy Levey, executive director of the Jewish Council on Urban Affairs, a Chicago social justice group, said she was excited initially to have a Jew in City Hall. But she said the mayor has not met the group’s expectations when it comes to helping the city’s immigrants, reforming its police department and boosting its poor neighborhoods.

“We looked forward to working with Mayor Emanuel on issues that reflect our Jewish values, such as immigration and police accountability,” Levey wrote to JTA in an email. “While Mayor Emanuel worked successfully to bring white collar jobs and investment to the city, he was much less successful at addressing the deep economic disparities and disinvestment that continue to plague Chicago’s neighborhoods.”

Whatever his legacy in Chicago, a few people told JTA that they were surprised by Emanuel’s decision to forgo a third term. But Rabbi Jack Moline, who has been described as Emanuel’s rabbi, says Emanuel saw himself serving only two terms when he started, and that he wouldn’t be surprised if Emanuel returns to politics after a short break.

“He has a lot of talent and he has the kind of energy that is necessary to make a difference in the values that he and I share,” said Moline, now the president of the Interfaith Alliance, a liberal religious advocacy group. “I expect that there is another place for him to express that, although I have given up predicting what Rahm Emanuel is going to do.”