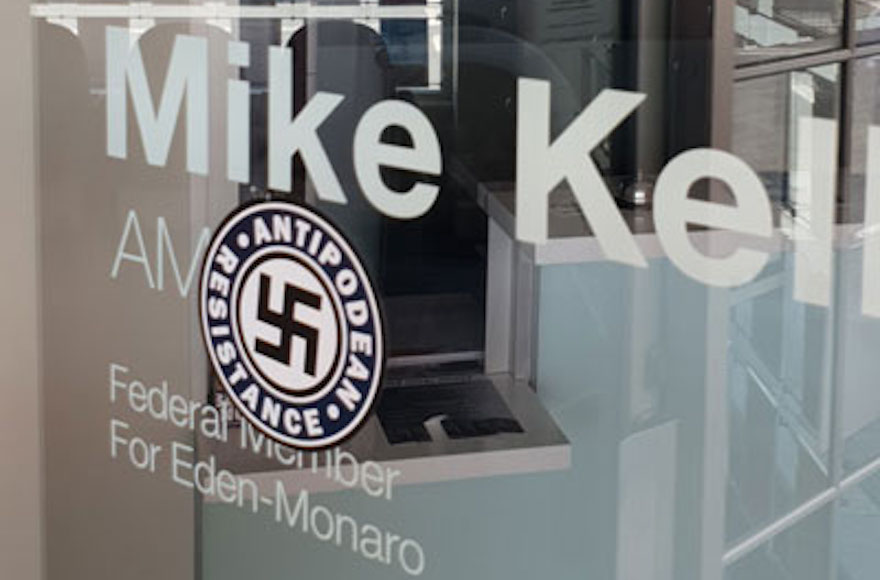 SYDNEY (JTA) — The district office of an Australian member of Parliament whose wife is Jewish was targeted by racists who threw pig’s entrails at the front door.

The early Wednesday morning attack on Mike Kelly’s office followed less than two weeks after an attack on another of the Labor lawmaker’s offices. In the first attack, the far-right Antipodean Resistance group plastered swastika stickers on the door.

This week’s attack took place in the New South Wales city of Queanbeyan, located just 10 miles from Australia’s capital, Canberra. The swastika attack occurred in the coastal town of Bega, 135 miles from Queanbeyan.

“The series of attacks directed at my electorate offices are evidence of the need for constant vigilance and the confrontation of extremist groups in our country,” Kelly, a colonel in the military who served in the Iraq War and a former military attorney, told JTA.

“If the perpetrators think that they will intimidate me into refraining from defending Israel or supporting our Jewish community, they are deluded,” he said. “Actions like this only spur me to greater efforts and commitment. I have faced much worse threats in my Army career, and I will continue to fight racism and ignorance wherever I find it.”

Kelly, who is married to Shelly Sakker Kelly, also served in Somalia, East Timor and Bosnia. In 1993, he was awarded the Chief of the General Staff Commendation.