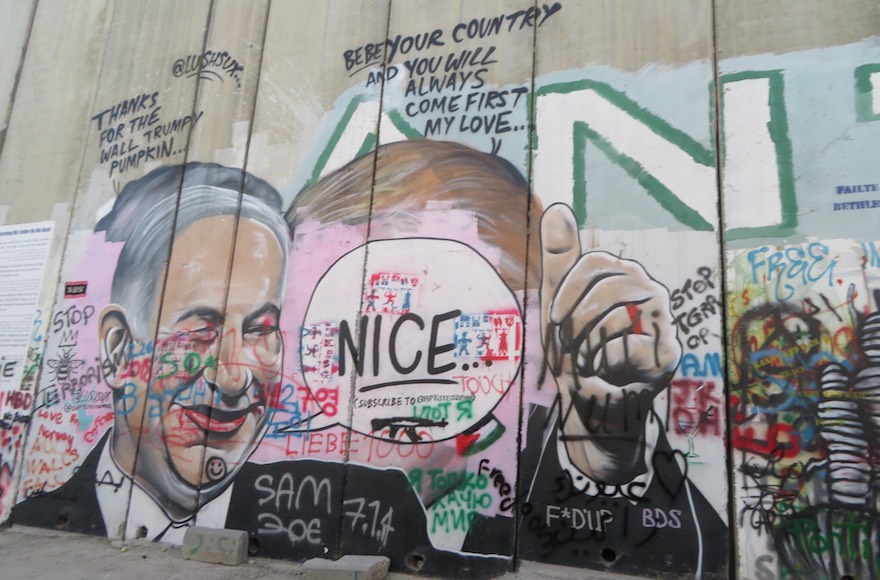 The Palestinian side of the separation wall in Bethlehem, seen June 25, 2018. (Ron Kampeas)
Advertisement

(JTA) — The wall separating Bethlehem from Israel-controlled territory is silent and noisy at once, like the breakdown in conversation between Israelis and Palestinians that helped kill the Oslo peace accords.

It was only this year — in June, almost 25 years since the launch of the accords that were supposed to reconcile the sides — that I’d seen the wall up close, and its hugeness was aggravating.

In the West Bank city, the wall is a locus of steadfastness on both sides, a mutual and perpetual silent treatment. But it is also alive, at least on the Palestinian side, with expressions of anger and rebuke. “ANTI” appears in huge block letters, a repudiation of, well, everything. But the graffiti is in English and Arabic, not Hebrew — Israelis need to get permits from their government to enter Palestinian-controlled areas. Palestinians are talking to themselves and to their sympathizers.

My aggravation is compounded because I know how easy conversation can be on either side. Both entities, Israel and the Palestinian areas, are tiny and crowded, and strangers talk more freely than they do throughout much of the West.

Israel is so small, lives often cross in separate spheres.

“Is that Ehud Barak?” my wife, Doina, asked sometime in early 1999 when we saw him at a hotel. Barak was preparing for his successful bid to unseat Prime Minister Benjamin Netanyahu and to revive the Oslo process launched by his mentor, the assassinated prime minister Yitzhak Rabin.

Barak was smiling, leaning on the reception desk and chatting with a small coterie of men at the Crowne Plaza, where The Associated Press was putting us up while we settled into my second Jerusalem gig with the agency.

I agreed, but what struck me was a suit that didn’t seem to sit well on him, bunched in awkward creases on his shoulders. I had become accustomed to seeing him in an army uniform.

Barak soon learned to wear his civvies more naturally, and I got to know him a little better, joining other reporters on his flights to Europe and the United States, where he tried to salvage the peace process. He came up short in 2001: The peace was dead, the second intifada was in full force and Ariel Sharon was elected prime minister.

Israel is small. I knew Ehud Barak as a reporter’s subject and as someone I passed in a hotel reception area, both natural enough circumstances in the tiny country.

My first encounter with Barak had come years earlier, in the fall of 1993 at the Dehaishe refugee camp near Bethlehem, in the West Bank. We were both in uniform.

My reserve unit was the last guard at the camp. Barak, then the military chief of staff, paid us a surprise visit. Rabin was pulling troops out of Dehaishe a few weeks after the Sept. 13, 1993, ceremony in Oslo with President Bill Clinton and Palestinian leader Yasser Arafat.

Barak stood in his signature pose, arms crossed tightly across his chest, and grinned, rapid-firing questions at us in the cold, late afternoon light. What did we think of the pullout? He caught my eye, but only for a moment, thank God. An officer spoke up. I was a lowly corporal. I didn’t think anything.

I caught the second-to-last shift at Dehaishe, overnight, and I heard the chorus of minarets playing the recorded call to prayer before dawn, which I loved and still love. Later that morning we piled onto trucks and headed for Nablus. We were to guard the courthouse there.

Israeli troops marched dozens of Palestinians, some teenagers, into the courtroom on charges of belonging to Hamas. The judge asked each, did you join before Sept. 13 or after?

Most of them knew enough to say “before” and they were let off with a warning. One or two stumbled and said “after,” and then figured it out. Israel’s message was this: Hamas was always illegal, but OK, you get a pass if you joined up when things were hopeless. Now that there is a peace process, we’re going to do Fatah a favor and make it dangerous to join Hamas.

This was unsettling: Why was Israel doing the nascent Palestinian Authority’s dirty work?

The Palestinian territories are so small, lives will cross in separate spheres.

Barak won the elections in July 1999 and in October that year, he was given a boost in his bid to advance peace talks when Nelson Mandela paid the region a visit. His was a truth-to-power tour: In Jerusalem, the just-retired South African president told Israelis that they had to concede territories; in Gaza, at the Palestinian parliament, he said Arab nations must recognize Israel’s right to exist.

I followed Mandela through Gaza City and then had to wait out his address to parliament. The AP had a cramped office in Gaza City, on the second floor. A corner wall was plastered with news photos of the late Princess Diana, a favorite of the bureau’s chief correspondent.

I was hungry and descended to the street where there was a restaurant. Across the street was a vendor, seated behind a folding table piled with goods — what I forget. I do remember his slim build, small round head, round eyes, his cool affect, his receding, light brown hair, his youth, his pale complexion.

This vendor was familiar, and with an unsettling specificity. He didn’t just look like someone; I had seen him before. He returned my gaze, I thought, with meaning. He recognized me, too, or so it seemed.

But this was my first time in Gaza City. I had been in the Gaza Strip, seven, eight, nine years earlier — as a soldier, part of a force policing an intifada that exploded daily in the Nuseirat and Bureij refugee camps. That’s where I had seen him: One of the leaders, I was sure, guiding the surges toward us, showering us with stones, and then the retreats as we raised our rifles, armed with the extensions that fired rubber bullets.

I got my lunch and went back upstairs.

“Do people from Nuseirat or Bureij come up to Gaza City to work?” I asked my colleague.

It could be, he responded. 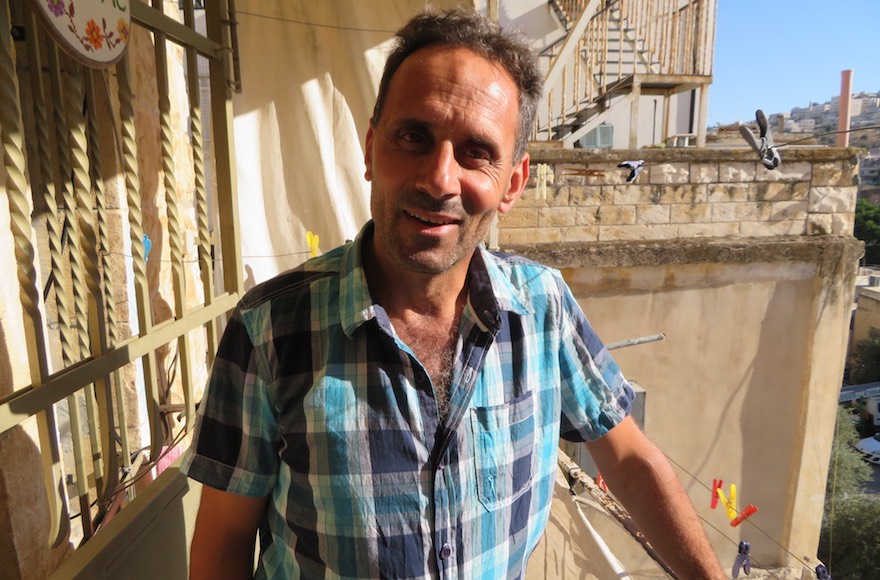 Ibrahem Abassi poses at his home in the Silwan neighborhood of Jerusalem, June 27, 2018. (Ron Kampeas)

The Palestinian territories are small.

I left Israel in 2000, but I’ve been back frequently. I saw the wall rise from a distance when I visited Jerusalem. While living in Israel, I had visited Palestinian areas, not infrequently — well enough to know where to get the best Bethlehem chicken, coffee in Ramallah and a car repaired on the cheap.

On my visits back as a citizen-tourist, I’ve barely visited the West Bank: Once while covering President George W. Bush’s 2008 visit, and another time visiting a friend in a settlement. And now with Encounter.

The Palestinian territories are cramped. More cramped than I remember.

For Israel, the extended security barrier is the device that shut down the second intifada’s terrorist attacks on civilians. For Palestinians, at least in Bethlehem, it is a means of talking to themselves about lives limited by roadblocks, splashed with slogans and self-help advice, like a late morning talk show but static.

“Freedom of the mind is not always enough,” one graffito says.

Both sides suffer from physical and intellectual claustrophobia. Just saying hello is fraught with meaning in this conflict. Some of the Palestinians who spoke to the Encounter group will not knowingly speak to Israelis. Nevertheless, Encounter says its goal is to “enable deeply committed Jewish influencers to encounter firsthand the people, perspectives and challenges at the heart of the conflict” in order “to effectuate more inclusive and constructive leadership on some of the most divisive issues in our own communities.”

What is an “influencer”? How do I “effectuate”?

But it’s hard to blame the program’s organizers for falling into the habits of cadged, obscure language.

I am one of seven dual Israeli citizens among the 30 people on this tour. This group within the group creates logistical challenges: Encounter has to apply for permission from Israel for us to enter Area A, the Palestinian Authority-controlled area of the West Bank (including Bethlehem); without the permits, they will change the whole program. And we need separate accommodations, as Israel will not allow Israelis under any circumstances to spend nights in Area A.

An organizer tells us we’re worth the trouble. Encounter wants Palestinian claims to reach Israeli areas, and we are seen as “influencers” not just in the American Jewish community but in Israel. Having us in meetings with Palestinians who will not countenance “normalization” with Israelis is one limited way of broadening the program’s reach.

There are Palestinians eager to talk to Israelis. Some of the Palestinians plainly speak of a time when this came more easily. Sami Awad, who directs the Holy Land Trust, which advocates for nonviolence, said Oslo and the separation that undergirded that peace plan — made manifest in roadblocks and crossings and permits — had the (perhaps) unintended consequence of shutting down meetings.

“It actually became more challenging for Palestinians and Israelis to meet each other,” he told us.

Some of the Palestinians we meet betray a longing to learn more about the people on the other side of the fences and borders, in some cases across the alley and up a flight of stairs.

Ibrahem Abassi, who lives in Silwan, the ancient, clustered neighborhood bordering Jerusalem’s Old City, told us the story of Hadass, the Jewish nurse at Hadassah Mount Scopus who cared for his ailing mother.

One day not long after his mother died, Abassi said, he drove home and saw Hadass walking through Silwan. He was moved: She had come to pay her condolences.

But she had not: She was his neighbor, living literally meters away up a flight of steps in one of the Jewish developments in the neighborhood reviled by Palestinians. How could he not know this? This woman who had gone out of her way to extend every comfort to his mother, whom he had come to love for her kindnesses. How could she not tell him she was a neighbor?

Israelis and Palestinians say as much in what they omit from their conversations as in what they say. Twenty-five years after Oslo, it is dead or dying, and there are autopsies blaming Israel’s undaunted settlement expansion, Palestinian recalcitrance and the unremitting violence on both sides. It was, they say, mortally wounded when an Israeli assassin felled Rabin in 1995.

It died, I think, in these silences.

There’s one evening of home hospitality, in Bethlehem. Our group of Israelis is unable to stay overnight, so on our way to our hotel we have dinner in an area straddling Area B (under partial Palestinian control) and C (under Israeli control), near the village of Bet Sahur, at the apartment of Evon Rishmawy, a water control expert.

The meal is stunning, piles of stuffed vine leaves and squash, in a warm apartment crowded with Christian paraphernalia. She asks us about the United States and recalls hosting — for months — a Jewish college student, and how close they became. Our status as Israelis is never explicitly acknowledged. Why are we holding back?

Our driver arrives and Rishmawy walks us into the street. She cautions him to drive carefully, to care for her guests.

“Dir balak!” she warns him in Arabic. “Pay attention!”

I do, and the reason why envelops me like a pool of cold water: It’s a phrase we used as soldiers to caution Palestinians.

My smile disappears. So does hers. Our group drives off into the night.