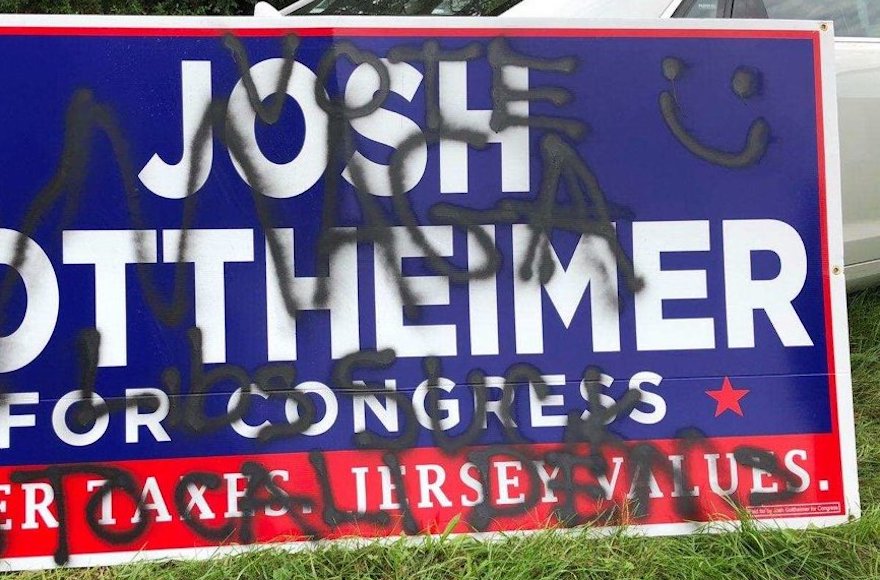 (JTA) — A swastika was painted on the home of a supporter of Democratic New Jersey Rep. Josh Gottheimer.

The campaign sign standing in the front yard of Adam Stolarsky, 48, who lives in the house with his girlfriend, Colleen Murch, also was defaced with drawings of swastikas, penises and vulgar language. The graffiti also called on people to “vote MAGA,” a reference to President Donald Trump’s popular campaign slogan “Make America Great Again.”

The vandalism occurred early on Saturday morning, The New York Times reported. It was the second time in the week since the couple put up the sign that it was vandalized.  In addition, there were signs that the vandals had tried to force open the garage door on which they painted the swastika. Stolarsky and Murch are not Jewish. They replaced the sign hours after the attack.

Gottheimer, who is Jewish and running for his second term in New Jersey’s 5th Congressional district, said in a statement issued on Saturday that: “There’s no place for white supremacists or anti-Semitism in our broader community, and this vile hate-motivated crime certainly does not reflect the values of the people of Sussex County.”

It is not the first time that the Gottheimer campaign has been subject to an anti-Semitic attack. Prior to the 2016 election, an anti-Semitic flier depicting Gottheimer with devil’s horns and a sinister goatee alongside a pitchfork was distributed in the district. Gottheimer alleged that supporters of the Republican then-incumbent, Rep. Scott Garrett, distributed the flier.