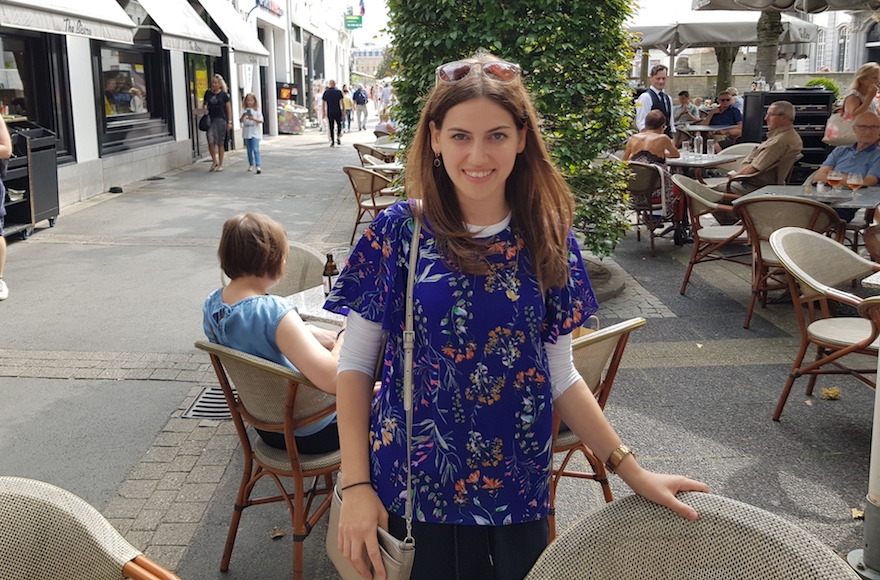 Her prestigious alma mater, this city’s Karel de Grote University College, from where she graduated last year with a degree in clinical psychology, awarded her a distinction for excellence. It was partly in recognition of her journey from one of the world’s most insular faith communities: Antwerp’s large population of haredi Orthodox Jews.

It was the first feat of its kind for someone from that world. Friedman grew up with seven siblings, and without internet or television. She joined Facebook three years ago for studies-related purposes. Despite communal taboos on female modesty, Friedman is liberal enough to shake hands with men — a gesture that some Jewish and Muslim clerics forbid.

“My life has changed a lot since I went studying,” she said. “You could call it a turning point, and it’s something I’d like to see as many people as possible experiencing — Jews and non-Jews alike.”

Now Friedman, who is fluent in at least five languages, is seeking to break another barrier and become the first haredi woman on the City Council here, where she is running on the ticket of the centrist party of Deputy Prime Minister Kris Peeters. However, her candidacy may be suffering from the fact that her father, a rabbi, has become a communal pariah for his extreme views on Israel, the Holocaust and his co-religionists.

In a bid to woo voters from the city’s Jewish community of 20,000, Peeters, a leader of the Christian Democratic and Flemish Party, posed with Friedman for a campaign poster unveiled last month, wishing residents Shanah Tovah, or a Happy Jewish New Year.

“I’m Jewish Orthodox, but I represent no community,” said Friedman, a kindergarten teacher whose main campaign focus is children’s welfare. “I am running to represent children and their rights, and their entitlement to education.”

On paper, these credentials make Friedman a strong candidate in Sunday’s municipal elections.

But in the Antwerp Jewish community, her candidacy is complicated not only because of her liberal image but by her father, Moshe Aryeh Friedman, and his frequent provocations. Recently he was embroiled in a spying scandal involving a Moroccan woman. Before that he fought off allegations that he denied the Holocaust while visiting Iran and meeting the country’s then-president, Mahmoud Ahmadinejad. Rabbi Friedman also attacked the community publicly on gender segregation at schools and for shechitah, the slaughter of animals without stunning.

His daughter says her father’s politics are irrelevant to her candidacy.

“I am not my father,” Friedman told JTA in an interview at a cafe here. “I don’t think people need to look to my father or aunt or whoever when they decide whether to vote for me.”

But Friedman still lives with her parents, who recently became the focus of an international spy scandal between Belgium and Morocco.

The couple’s friend, 32-year-old Kaoutar Fal, left Belgium on July 23 amid suspicions that she is a Moroccan spy — a claim she and the Friedmans have denied. Moshe Friedman and his wife, Lea Rosenzweig, have been at the forefront of an effort to clear Fal’s name. She gave authorities the Friedmans’ address in Antwerp as her correspondence address there.

Michael Freilich, editor in chief of the Belgian Jewish paper Joods Actueel, said that “we have to ask ourselves questions about” a suspected spy’s ties and access to politicians during the lead-up to elections and “whether this is a security issue.”

Christophe Busch, a terrorism expert and criminologist who is the director of the Kazerne Dossin Holocaust museum near Antwerp, told Joods Actueel that even if Friedman herself never does anything to endanger national security, “There is the appearance that that’s possible.”

Rezi Friedman declined to say anything about the concerns. She also would not speak about her position on Israel, calling the issue irrelevant.

“I want to fight how poverty affects many children in Antwerp, including Jewish ones,” she said. “I’m talking about how many families can’t afford the price tag of $35 for each day of day care per child. It has nothing to do with Israel.”

Friedman also would not say how she came to be on her party’s ticket, including whether the party contacted her or vice versa. She did say that the party’s “multicultural and forward-thinking” message appealed to her.

But Friedman seems to share at least one conviction with her father about one of the Jewish community’s most serious disputes with authorities: the ban in Belgium on shechitah.

Last year, the Flemish Region, whose major city is Antwerp, and another of the three entities that make up the Federal Belgian state banned the slaughter of all animals without stunning in a move that the country’s Jewish community condemned vociferously as a violation of the constitution. The Muslim community, whose members consume halal meat produced similarly to kosher, also protested.

Yet despite a rabbinical consensus to the contrary, Friedman told JTA that she has no problem with stunning.

“Animal welfare is important to me. All parties should go into a dialogue on the issue,” she said.

It’s a view is shared by her father, who in 2013 embarrassed communal leaders by enrolling two of his boys at a Jewish girls’ school to highlight the controversial gender segregation at state-funded Jewish schools.

In March, the elder Friedman told a Flemish newspaper that “only extremists are against the ban on slaughtering without stunning.”

Nearly all major parties in Antwerp have Jewish candidates; there are at least nine in this election. Claude Marinower, a city alderman for education, is a prominent local politician for the Open Flemish Liberals and Democrats. Another heavyweight is Andre Gantman of the right-wing New Flemish Alliance. On the left, Tatjana Scheck is a candidate for the socialist Differently party.

But an Orthodox Jewish female candidate is very unusual on the Antwerp political scene. The last one ran in the 1990s and did not stand a chance of being elected because she was too far down her party’s ticket, according to Freilich.

“That’s all different with Rezi,” the editor said, noting that Friedman is 16th on her party’s ticket for one of 48 seats on the City Council and is “featured prominently with Peeters.”

Regardless of how Friedman fares in the election, her father says he is already “extremely proud of her daughter.”

The rabbi said that even some his “enemies” told him that by winning the award at her college, his daughter is “bringing an honor to the community” that “offsets the anger from [all the] fights.”