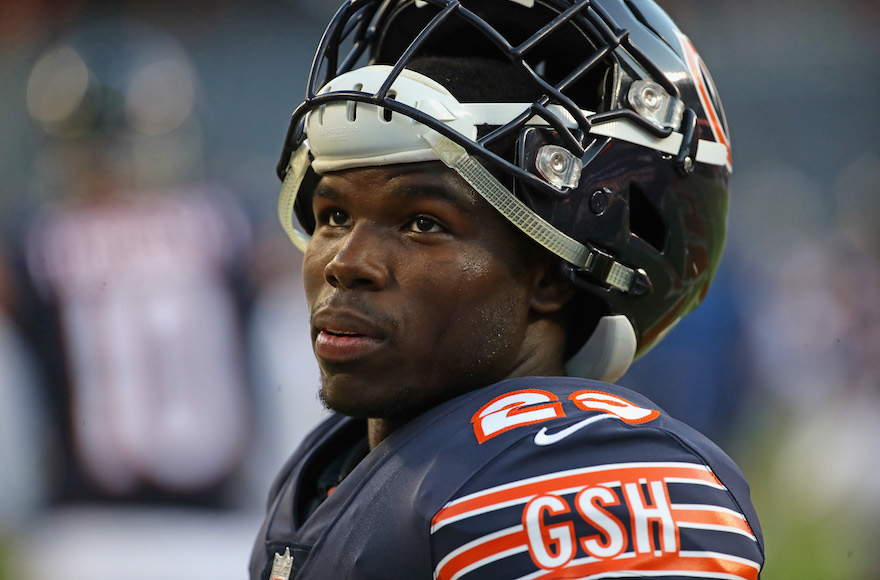 Tarik Cohen at a warmup during a preseason game at Soldier Field in Chicago, Aug. 30, 2018. (Jonathan Daniel/Getty Images)
Advertisement

But the 23-year-old Chicago Bears running back’s last name fueled some speculation when he surprisingly burst onto the national scene last season after being a late-round draft pick.

Adam Lefkoe, who hosts a show for the popular sports site Bleacher Report and is Jewish, clearly was among those interested in Cohen’s story. So for his latest episode of his show, “Simms and Lefkoe” — co-hosted with former NFL quarterback Chris Simms — Lefkoe invited Cohen to the Jewish Sarge’s Deli in New York City to school him on some basic nuggets of Jewish culture — mostly food and Yiddish phrases.

(Lefkoe dubs it a “Jewish combine,” a reference to the NFL’s annual prospect scouting day, which involves players performing tests of their abilities, such as a 40-yard dash and a bench press competition.)

As Lefkoe explains at the beginning of the video, not only is Cohen not Jewish, he has never been to a bar mitzvah or tried any kind of specifically Jewish food. Here are all the things Lefkoe teaches him about:

Bagel with lox: When Lefkoe asks Cohen what is on this “customary Jewish breakfast,” Cohen guesses “sushi.” Sadly, after trying, he doesn’t like the combination of smoked salmon and cream cheese.

Pastrami on rye: Cohen seems to be neutral on this one, and he asks why the sandwich has no cheese. “Well, that wouldn’t be kosher,” Lefkoe explains.

Matzah ball soup: Asked if he had heard of the food, Cohen shakes his head and says he knows what “mozzarella” is. At least Cohen enjoys the taste of this one.

Schmooze: Cohen’s guess as to what this one means is “good sleep” — like “I’m about to schmooze,” he explains. Almost.

Chutzpah: On the first try, Cohen pronounces the “ch” sound as one would in normal English. But on the second try, he nails the back-of-the-throat Yiddish style.

Oy vey: This one is a little easier to explain. Cohen says, “That’s the one I’m gonna use, right there.”

For acing the Jewish combine, Lefkoe gives Cohen a yarmulke with the Bears logo and lifts him up in a chair. Mazel tov, Tarik.