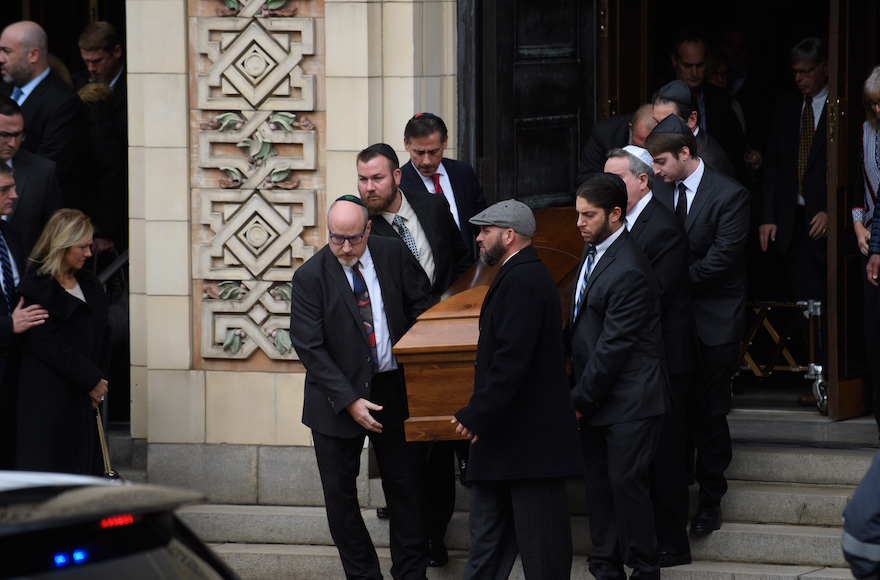 PITTSBURGH (JTA) — Cecil Rosenthal would always ask after your sick mother or inquire about your marriage — or divorce. His brother, David, a jokester, loved the police and every year would buy the same sunglasses with mirrored lenses.

At a moving ceremony Tuesday, relatives stood before a funeral home packed with mourners to share fond memories of the brothers, who were the first to die in Saturday’s mass shooting at the Tree of Life Congregation here.

David, 54, and Cecil, 59, who were intellectually disabled, were greeting worshippers at the synagogue as they did most Saturday mornings when they were struck down by Robert Bowers, the alleged gunman. They were laid to rest following a funeral at Congregation Rodef Shalom in Shadyside.

“Our brothers, Cecil and David, were men, but as most people here in the audience know, we referred to them as ‘The Boys,’” said their middle sister, Diane Rosenthal, in her eulogy. “Maybe this is because they were innocent like boys, not hardened like men oftentimes become with age and experience. We always thought of Cecil and David as the two gentle giants.”

Diane’s husband, Michael Hirt, said David was a banterer who would begin every phone conversation by telling Hirt that the police were after him. David was a big police enthusiast, buying mirrored sunglasses — and a bottle of cologne — every year at a flea market, and walking around with a scanner radio.

“David loved anything related to the police,” Hirt said in his eulogy. “When his favorite toy, his scanner radio, broke recently, he was relentless in asking us to fix or replace it.”

David worked at a number of cleaning jobs, a passion that extended to his personal life. Hirt said if you were sitting in a living room and put your glass on the floor for one minute, David would have taken it to the kitchen, rinsed it and put it in the dishwasher. He loved to help his mother clear the table.

He was also something of a flirt.

“David loved women,” Hirt said. “I’m sure most of the women here today were asked at one point or another by David, ‘Are you married?’ followed by, ‘Do you want to go to Hawaii?’”

Cecil, Hirt said, was the “consummate politician” and a socialite. He was always asking after people. His sister and brother-in-law once tried to keep a funeral secret from him, only to see him walk in in the middle after finding his way there.

“Cecil knew everyone in town,” Hirt said. “He knew everyone’s business. He knew if your mother was sick or your grandfather had died. How many times had Cecil stopped you on the street to talk about some pending marriage or pending divorce?”

Cecil, both Hirt and Diane Rosenthal said, loved a party. At his nieces’ bat mitzvahs, he went from table to table introducing himself and saying he planned the party.

“He talked about the b’nai mitzvah for what seemed like years before the event actually occurred,” Hirt said. “Cecil absolutely loved a party, and I can guarantee that he is looking down upon us now asking ‘Are you proud of me?’”

“Those memories will remind us of how we should try to live our lives,” she said. “Embracing joy or love or happiness without making judgments or resenting people or hate.”