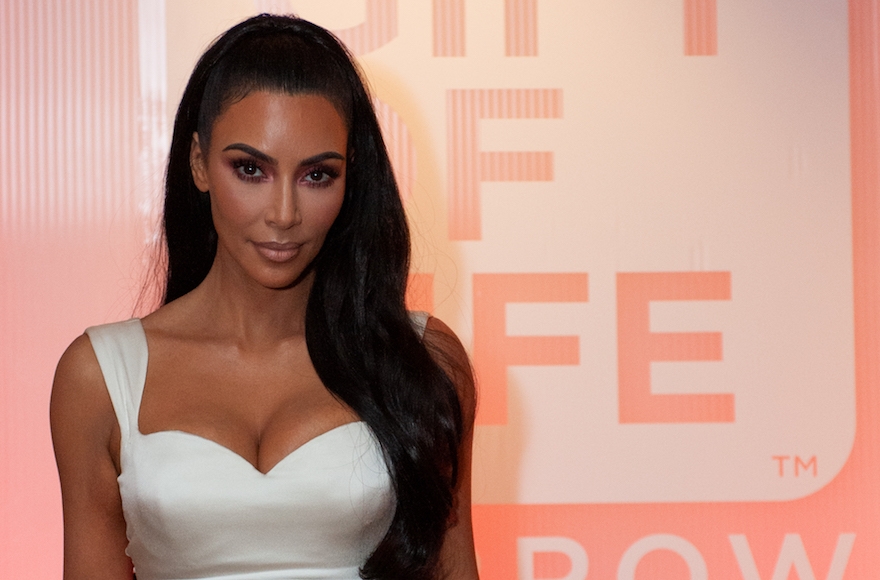 (JTA) — Kim Kardashian West was honored for her efforts to match a Jewish man with blood cancer with an appropriate bone marrow donor.

Kardashian received the Impact Award from the Gift of Life Marrow Registry on Monday at a gala in Beverly Hills, California.

In 2016, she alerted her followers on social media to help a young Jewish father named Adam Krief, who was diagnosed with an aggressive form of blood cancer and required a life-saving bone marrow transplant.

She was recognized for her support for Gift of Life and the Hope4Adam campaign.

A donor was found for Krief in December 2016, but he developed complications and died three months later.

Kardashian’s Facebook page has over 29 million likes and she has over 48 million Twitter followers. Through her actions, more than 10,000 new donors joined Gift of Life, and her actions led to four donor-recipient matches and one transplant.

“I was first introduced to Adam’s story by my best friend Allison, whose son was in the same class as their boy. And once I heard his story, I just knew that I wanted to do something,” Kardashian said at the gala.

“I made a simple tweet. Knowing that it could change someone’s life, that’s the easiest thing that I could possibly do. I would do it a million times over. I was so overwhelmed and inspired by the over 10,000 people that joined the registry. I joined myself because my cousin CiCi, who’s battled cancer for 18 years, had a similar problem.”

“I remember sitting in the City of Hope Hospital room, in that chair, Adam on the computer, me on my phone, and he looks up and says, ‘you’re not going to believe this,’” Lia Krief recalled. “And I said ‘what?’ And he says to me, ‘I think Kim K is in love with me.’ The outcry of support and kind words and possible donors just started flooding the gateways in such a short amount of time.”

A donor-recipient pair who were connected through the Hope4Adam campaign met at the gala for the first time. Tony Wolfe, 47, a former corrections officer from Jim Thorpe, Pennsylvania, who battled Philadelphia Chromosome Positive Acute Lymphoblastic Leukemia, met Alan Weinberg, 31, of Queens, New York, a fiscal officer for the borough president’s office. Wolfe received a life-saving stem cell transplant from Weinberg.

Gift of Life was launched in 1991 by Jay Feinberg, a Jewish man stricken with leukemia who found a marrow donor following a long search. The Jewish community has been a major supporter of the nonprofit organization.