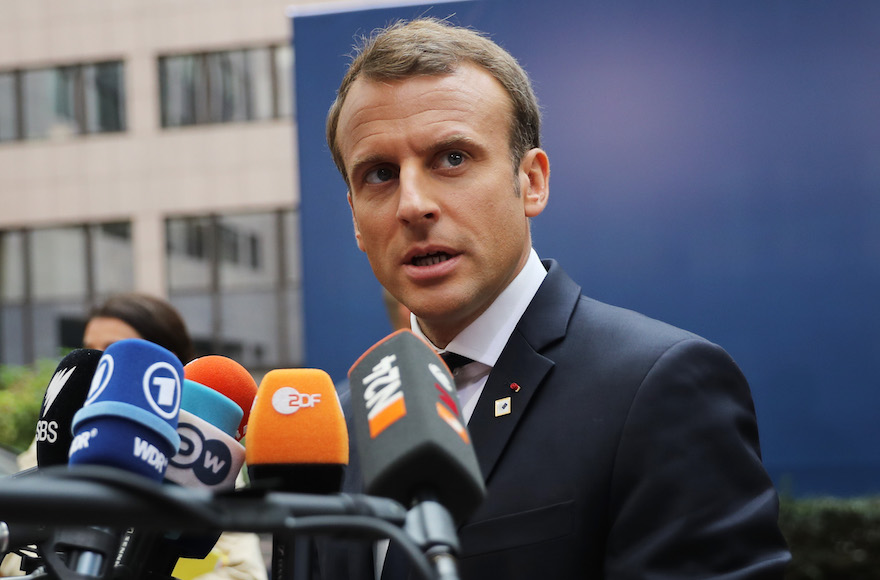 (JTA) — French President Emmanuel Macron said he had no intention of officially commemorating the deceased Nazi collaborator Philippe Petain after he praised him to reporters.

At a news conference Thursday in the country’s north, he was asked about his comment Wednesday that Petain was a “great soldier.”

Lashing out at reporters for bringing up the issue, Macron said Thursday in Maubeuge: “You seem to have quite the taste for useless polemics.” Echoing President Donald Trump’s frequent broadsides against the media, he added: “I think the country needs something else other than the crazy TV show you are collectively creating.”

Macron said it would be “unacceptable” to commemorate Petain during the 100th anniversary of the end of World War I, in which Petain fought. But, he said, there were never any plans to do so, irrespective of his remark.

Many French media comments in praise of Petain’s military career as a sign that he would be included in ceremonies on Sunday in Paris commemorating those who fought for France in World War I. Petain, led the French Army to victory at the Battle of Verdun, went on to head the Vichy puppet government under the Nazis during World War II.

“I am appalled that such a man could be honored,” Francis Kalifat, the president of the main Jewish umbrella group CRIF, said Wednesday in an interview with RJC radio. “This is the man who was responsible for the deportation of French Jews, and notably at the Vel d’Hiv” stadium in July 1942.

The Elysee presidential palace in a statement Thursday said the events in Paris there would be limited to the five marshals commemorated at the Les Invalides monument, which does not include Petain.

At the news conference in Maubeuge, Macron said “there was never a question of celebrating individually” Petain.

Still, Macron doubled down on his show of appreciation for the man who embodied a shameful episode in French history.

“There was the Marshal Petain who was one of the main players and great soldiers” of World War I, said Macron, “and so I say simply this: We don’t erase history, we are not the censors of history.”