Is Spain really ready to become a haven for people with Jewish roots? 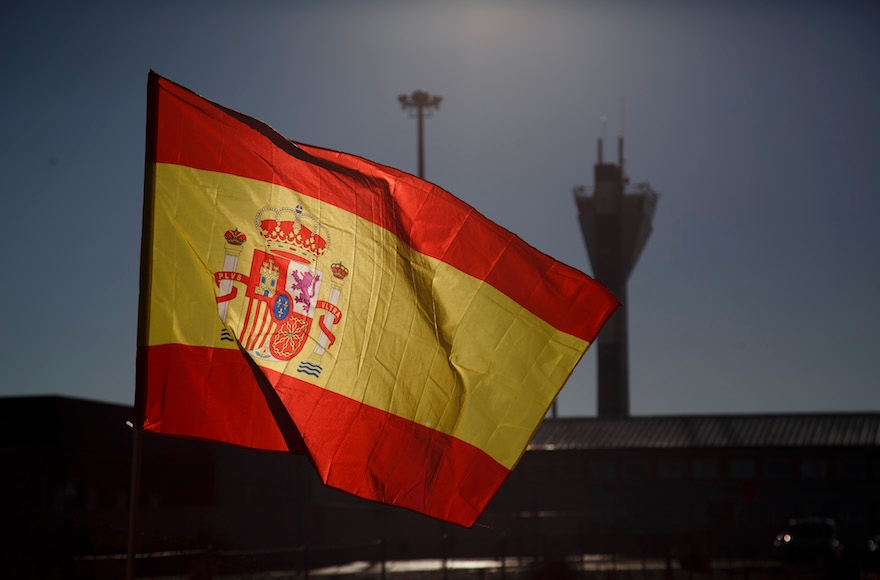 MADRID, SPAIN - DECEMBER 19: A Spanish flag from a pro-unity supporter waves in the air outside Estremera Prison ahead of Catalan parliamentary elections on December 19, 2017 near Estremera, in Madrid province, Spain. Catalonia heads into the final day of campaigning before going to the polls on December 21, in an election set to replace or re-elect the deposed separatist leaders whose secession bid plunged Spain into its worst political crisis in decades. Currently, Esquerra Republica de Catalunya party leader Oriol Junqueras remains in Extremera prison for alleged charges of rebellion, sedition and misuse of public funds following to the unilateral declaration of independence. (Photo by Pablo Blazquez Dominguez/Getty Images)
Advertisement

(JTA) — Blaming Donald Trump for a resurgence of  racism in America, some Hispanics are seeking Spanish citizenship based on their Jewish roots, according to The New York Times.

An article identifying several such individuals, including one Albuquerque, New Mexico, woman who was raised Catholic, appeared Tuesday. The Times reported an increase in interest by non-Jews from the United States and Latin America who, for various reasons, have applied for a Spanish passport based on a 2015 law that Spain passed to atone for the expulsion of Jews during the Inquisition. Portugal passed similar legislation a year earlier.

The article raises several interesting questions, including whether those seeking to flee racism in the United States would do well to immigrate under a law with strong Jewish connotations to Spain — a country whose society has a strong tradition of anti-Semitism that surveys consistently suggest isn’t going away anytime soon.

But a more practical question concerns the very feasibility of what The Times article describes as an “exit strategy” for American Hispanics who are not Jewish.

On paper, there is no reason that a Catholic applicant shouldn’t be naturalized. “Descendants of Sephardim,” after all, could include millions of South and Central Americans with Jewish ancestry, and hundreds of thousands more in Africa.

The laws in Spain and Portugal, whose constitutions forbid discrimination on the basis of religion or ethnicity, do not require applicants be Jewish. They stipulate only that they prove Sephardic lineage.

But in practice, the laws in Spain and Portugal may be applied too selectively to serve large numbers of non-Jews. This is partly because the laws in those countries make local Jewish communities responsible for vetting applications.

Some communities, including in Porto, Portugal, only approve applicants considered Jewish according to halachah, or rabbinic law. The Federation of Jewish Communities of Spain, or FCJE, says on its website that non-Jews may apply.

But even the website of the Spanish Ministry of Labour, Migrations and Social Security encourages applicants to obtain rabbinical certification to support their application.

It may appear discriminatory, but the de facto preference in some communities for applications by Jews is arguably in keeping with the spirit of the law, which Spanish and Portuguese officials have said many times is to atone for religious persecution of Jews. Muslims, atheists and others also were persecuted during the Inquisition.

On the ground, non-Jewish applicants can be naturalized if they have a Jewish grandparent, “or even, in some cases, a paternal great-grandfather,” according to Jacob Bendahan, an Israeli lawyer handling applications. In any case, “even if the applicant is not Jewish, they must present documents proving they are descended from Sephardim who were expelled. A ketubah, something,” he added, using the word for a Jewish wedding contract.

“It’s impossible for a Catholic applicant with Catholic lineage to get naturalized [just] because he has a Sephardic last name, like Perez or Cardozo,” Bendahan said.

The number of applicants approved so far — no more than 6,500 in Spain and about 2,000 in Portugal – suggests that the law is being interpreted strictly.

Spain and Portugal, European Union countries with high unemployment and national debts burdened by their relatively generous welfare policies, are broadly speaking not interested in encouraging immigration from their impoverished former colonies.

But would an applicant who feels discriminated against in the United States feel more comfortable in Spain?

The prevalence of anti-Semitic sentiment in the kingdom provides little assurances, despite the pro-Sephardic legislation in Spain and growing awareness to the touristic and educational potential of sites connected to Jewish heritage.

Spain, along with Italy, topped the Anti-Defamation League’s 2015 anti-Semitism index in Western Europe with 29 percent of the population holding anti-Semitic views. Jews are often conflated in Spain with Israel — including by a Catalan lawmaker who demanded the leader of Barcelona’s Jewish community be removed from the local government’s parliament for being “a foreign agent.”

Until 2015, Spain had a town called “Castrillo Kill Jews” — the name has been changed. Still, across northern Spain, people toast one another with the phrase “kill a Jew.” In a 2018 Pew survey of European countries, respondents in Spain and Portugal were the likeliest to agree with the statement that “Jews always pursue their own interests and not the interest of the country they live in.”

Boycotts of Israel are particularly popular in Spain, which had about 50 municipalities join the Boycott, Divestment and Sanctions movement – a higher number than anywhere else in Europe. In 2015, organizers of a music festival near Barcelona demanded that the American-Jewish singer Matisyahu sign a statement condemning Israel’s treatment of Palestinians. Matisyahu, who was the only artist asked to sign the document, declined and was disinvited.

Israel-related anti-Semitism is rife throughout Western Europe, but Spain still shows signs of classic Jew-hatred of the religious variety.

This sentiment made an appearance in 2015, when the RTVE state network aired a radio program titled “From the Inferno — The Jewish People: Propagator of the Satan Cult.”

The fact that a “vehemently anti-Semitic work filled with anti-Semitic conspiracy theories and slander made it to the Spanish airwaves is seriously troubling and warrants immediate condemnation from the Spanish government,” Jonathan Greenblatt, ADL’s national director, said after JTA reported about the show.

“How can a public entity give a podium to this sort of crude, lowly and disgusting racism?” he asked on Twitter, adding “A return of the Inquisition.”