I’m a reporter. I left my synagogue because of attacks on the media. 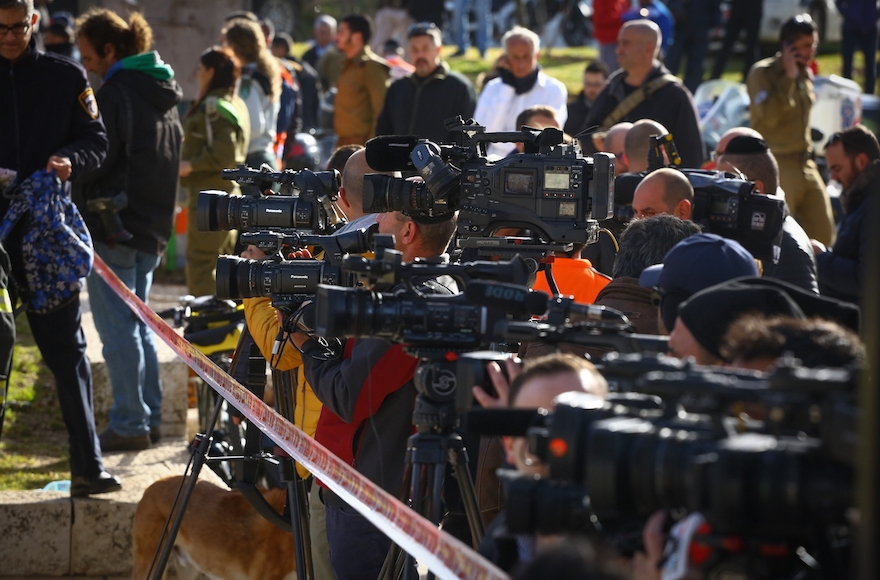 Israeli media at the scene of a where a truck rammed in a group of Israeli soldiers, killing at least four in a suspected vehicle-ramming attack, in the Armon haNatsiv neighborhood of Jerusalem, Jan. 8, 2017. (Shlomi Cohen/Flash90)
Advertisement

BEIT SHEMESH, Israel (JTA) — “What do you think of Jim Acosta?” Shlomo asked me several weeks ago as we stood outside the synagogue chatting during Friday evening services.

Crowing over the Trump administration’s decision to revoke the veteran CNN correspondent’s White House pass on what were widely seen as spurious grounds, my coreligionist entered into an earnest diatribe regarding both Acosta’s perceived iniquities as well as those of the fourth estate more generally. I replied gently, pushing back with an explanation of the often adversarial relationship between American presidents and the media.

As Shlomo stood there with an intent look on his face listening to my impassioned response, another congregant with whom I was unfamiliar interrupted, insisting that the media were overtly partisan and implying that I was ignorant of how journalism really worked.

This incident was far from the first time that members of my community had come to me to express their displeasure with my profession. As the only journalist many of them know, I was and still am a convenient target for them to vent about “fake news,” media bias and other issues.

Several months earlier I had written an essay for the Columbia Journalism Review describing how expressions of anti-press sentiment had increased dramatically in my overwhelmingly pro-Trump congregation following the 2016 presidential election. I described how I was repeatedly subjected to monologues about the greatness of Fox News and the depravity of the “mainstream media,” the “corruption” of the press and how newspapers ought to “advance [the president’s] agenda.”

The incidents were never accompanied by anger or hostility toward my person. However, the persistent misrepresentation of my profession and the assertions, both explicit and implicit, that I was hopelessly naive about the purportedly sinister inner workings of the media proved to be too much for me — especially as it usually came from people who had never set foot in a newsroom.

Mulling over the latest incident several days later, I decided to seek a replacement synagogue. Taking to social media, I tweeted that I had “quit my synagogue over the pervasive anti-press attitude that many of my fellow congregants hold. Didn’t make a fuss. Didn’t announce anything. Just went to a different synagogue yesterday and don’t plan on going back to the old one.”

My announcement made a small splash, with several colleagues both in Israel and abroad offering advice and encouragement. But, so far, nobody from the synagogue has noticed my absence.

Over the past couple of years I have polled my journalism colleagues at a number of media outlets across Israel and I discovered that none of them has dealt with the kind of pushback I have faced. The consensus seemed to be that because I lived in an especially religiously and politically conservative American immigrant enclave, my case was not representative. While that is true, as far as it goes, I do believe that the hostility I have encountered is a manifestation, admittedly extreme, of the public’s declining trust, in the United States and Israel, in the news media.

According to a recent Gallup/Knight Foundation report, nearly 70 percent of American adults “say their trust in the news media has decreased in the past decade.” Among political conservatives this rises to 95 percent. Polling conducted by the Israel Democracy Institute in 2017 painted a similar picture in Israel, finding that only 30 percent of Jews, and 18 percent of Arabs, trusted the media as an institution.

“I’ve never been called a liar or addressed in an aggressive or hostile way,” said Noga Tarnopolsky, a local freelancer who writes for a number of prominent American outlets. However, she added, “I often get asked [by Israelis] why [the foreign media] ‘hates us,’ but not in a way that I have felt is hostile to me.”

One British foreign correspondent who asked not to be identified told JTA that often when he approaches Israelis, they respond with “mini-lectures.”

“There is this common theme of interfering … I’ve found of people asking ‘why are you coming here and interfering or causing trouble?’” he said. “A lot of this is on social media rather than face to face and in the streets, and it seems to be this attempt to delegitimize the foreign media in Israel.”

Despite the criticism he sometimes endures, this correspondent believes that “in Israel people have more of a nuanced view and an understanding of the role of journalists. They are less vitriolic in their criticism.” Most of the worst criticism “seems to be by groups outside of Israel.”

“Of course, the media in Israel suffers a stigma of being more left-wing and liberal so people who would be less liberal would be inclined to see journalists as suspect,” said Nadav Eyal, the chief international correspondent for Israel’s Channel 10 News. “This is a natural thing and happens everywhere in the world in democratic countries in which the government does not control the media.”

Eyal said people begin to perceive the press as “sources of opposition.”

Regarding face-to-face confrontations with disgruntled viewers, he said that “the number of times it’s actually happened to me is very limited” but “what they do online is different.”

What happened to me in the synagogue is what happens to him online, Eyal said.

“I have been accused of [everything from] being a spy to working for George Soros, everything you can imagine,” he said.

Eyal said that Israeli outlets having taken down leaders from both sides of the political divide. However, the extended length of time that Prime Minister Benjamin Netanyahu has been in power has served to reinforce a belief that the media, which is largely doing its job in digging into the secrets of those in power, is a partisan actor. This, coupled with a relative “deficiency of cultural understanding of the importance of journalism to a healthy democracy,” has led to widespread suspicion of the press.

However, Eyal pointed out, “people say they don’t trust the press, but when you look at the consumption of journalism in this country, I don’t think there is anywhere in the Western world that consumes more news than Israelis. They might be critical, but they are buying.”

This dichotomy between high media consumption and low trust likely stems from the fact that Israel is, in many respects, a “war zone,” said media reporter Oren Persico of The Seventh Eye, a local press outlet that reports on media issues. “There is an atmosphere that any minute you can end up with a missile on your head, so you want to be up to date with what’s happening.”

And while Israel is filled with good journalists trying to do the best job possible, he said, the owners of local outlets often attempt to interfere with coverage in order to advance their interests, he said.

As examples, Persico noted how Netanyahu allegedly attempted to negotiate a quid pro quo with the owner of the Hebrew daily Yediot Acharanot in which the paper would tone down its criticism of his administration in exchange for eroding the influence of the free right-wing Israel Hayom tabloid. Israel Hayom, meanwhile, bankrolled by the American Jewish philanthropist Sheldon Adelson, has been largely unabashed in its pro-Netanyahu coverage.

“So in this environment it’s hard for the Israeli citizen to trust the newspaper,” Persico said.

However, understanding the roots of the problem do not make it any less pleasant to bear the condescension of media skeptics. My search for a new congregation continues. There’s one near my house where I hear they don’t discuss politics. I’ll give it a try.