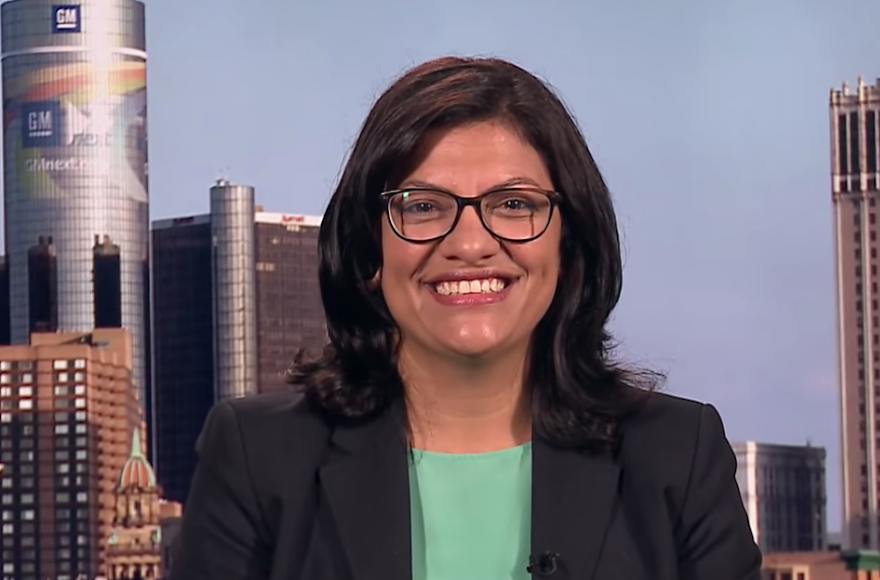 (JTA) — Rashida Tlaib, the newly elected Democratic congresswoman from Michigan, said she plans to lead a trip of incoming lawmakers to the West Bank.

Tlaib, who is Palestinian American and one of the first two Muslim women to be elected to Congress, told The Intercept in a story published Monday that her trip will focus on issues like Israel’s detention of Palestinian children, education, access to clean water and poverty – and perhaps a visit to the northern West Bank village of Beit Ur al-Foqa, where her grandmother lives.

Her trip would be a counterpoint to the traditional Israel mission for first-term lawmakers sponsored by the education arm of the American Israel Public Affairs Committee, or AIPAC, which includes touring and meetings with leading Israeli figures in business, government and the military.

“I want us to see that segregation and how that has really harmed us being able to achieve real peace in that region,” Tlaib said in the interview. “I don’t think AIPAC provides a real, fair lens into this issue. It’s one-sided.

Tlaib does not yet know when the trip will take place and which Palestinian advocacy group she will partner with to provide the thousands of dollars in funding necessary.

Some newly elected Democrats told The Intercept that they are exploring the possibility of joining Tlaib’s alternative trip but were not ready to comment publicly.

Tlaib in the interview also came out in support of the Boycott, Divestment and Sanctions movement against Israel, which she said brings attention to “issues like the racism and the international human rights violations by Israel right now.”

Ilhan Omar of Minnesota, the other Muslim woman elected to Congress in November, said in an interview shortly after the election that she supports the BDS movement after saying during her campaign that it was “counteractive” and prevents dialogue.