Netanyahu is mired in multiple scandals. So why is he so popular? 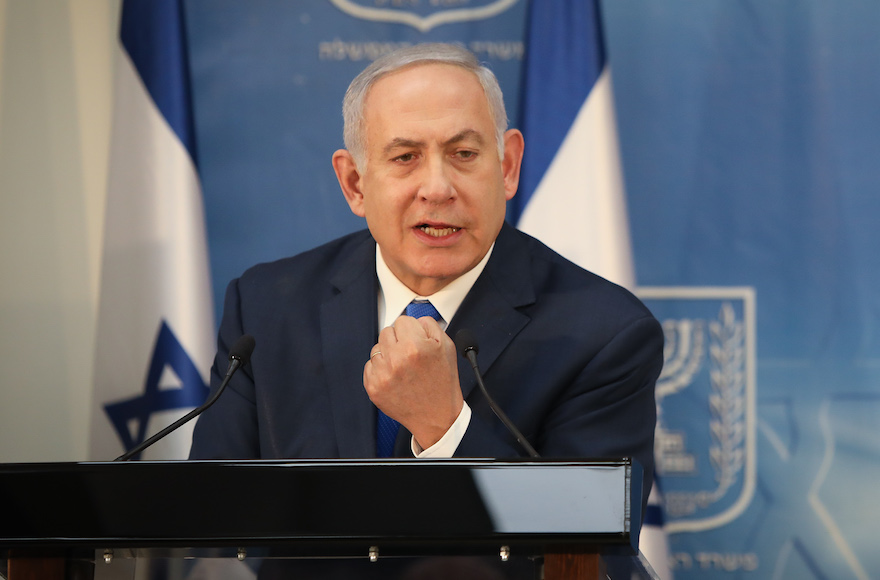 JERUSALEM (JTA) — “There will be nothing, because there is nothing,” Prime Minister Benjamin Netanyahu has taken to repeating of late, telling his supporters that despite allegations of corruption and multiple police investigations into his conduct, he is absolutely blameless.

Following opposition lawmakers’ calls for his resignation in response to this week’s police recommendation that he be indicted on charges including bribery and breach of trust, Netanyahu hit back, tweeting that “these recommendations were set and leaked before the investigations even began.”

As part of this effort, he and his allies in the government have gone on the offensive, blaming law enforcement, the media and the judiciary for conspiring against him.

It has proven an effective strategy, perhaps to the bafflement of outsiders, but one that Israelis have come to accept with the inevitability of, well, the latest corruption charges against a high-ranking public official.

“Netanyahu built himself up over many years as Mr. Security and when it comes to elections many people, especially on the right, vote on security issues rather than civilian issues like economics,” said one prominent Israeli pollster who asked not be named because it could damage his business.

“Up until now people haven’t felt that the corruption has touched them personally, and to persuade people about corruption you have to show them that they are personally hit by it,” the pollster explained. “Let’s say a mayor of a city someplace runs a city nicely. Even if convicted of corruption, they feel he has advanced the city and don’t feel that his corruption hit them personally.”

There have been several examples of such a phenomenon of late. In October, during the most recent round of municipal elections in Israel, several candidates who had either been convicted or were actively under investigation were elected or re-elected in Haifa, Netanya, Nazareth, Beer Yaakov, Hadera and the Tamar Regional Council.

As for Netanyahu, there are currently four distinct investigations into the prime minister and his inner circle, known in Israel as cases 1000, 2000, 3000 and 4000. Except for Case 3000, in which Netanyahu is not currently a suspect, all of the investigations focus on allegations that the prime minister engaged in quid pro quos to use his influence in exchange for gifts or personal favors.

In cases 2000 and 4000, he is alleged to have offered favors to the owners of media outlets in exchange for more favorable coverage. It was regarding Case 4000 that the police recommended that Netanyahu be indicted earlier this week. Police had previously recommended indictments in cases 1000 and 2000.

Despite his multiple scandals, however, the prime minister’s popularity has remained high and he retains the political support of both his base and a significant chunk of the wider electorate. According to a poll conducted by Smith Consulting in mid-November, Netanyahu’s Likud party would have received 29 mandates if elections had been held at the time. This is down only one seat from the 30 Likud now holds in the Knesset.

Also, 30 percent of those polled named Netanyahu most suitable for the role of prime minister — twice the level of support for the next highest-rated candidate.

According to the Israel Democracy Institute’s annual Democracy Index, which was released earlier this week, 72 percent of Israelis indicated that they see the government as corrupt. This shows that Israelis are “very alarmed and worried about the level of corruption,” the institute’s president, Yohanan Plesner, told JTA. “This indicates a lack of trust in the motivations of our public figures.”

However, the popular view of Israel as a corrupt country is likely less a reflection of overall corruption than of Israel’s successful fight against government misconduct, he said.

“The reason why there is a high perception [of corruption] is because we have independent law enforcement that interrogates and indicts politicians,” Plesner said, “so sometimes the activities designed to deal with corruption also increase the perception of corruption.”

Part of the prime minister’s enduring popularity is likely due to the public’s perception of the media, according to Likud Central Committee member Gidon Ariel, a staunch Netanyahu supporter.

“If the media seems to be against something, we are going to be for it. It sounds simplistic, but there it is,” Ariel said. “When you do see everything that Netanyahu claims is a success it’s hard to argue, and the biggest success for most Likud activists is he is succeeding, he is still the prime minister.”

And while Ariel said that he wished that Netanyahu would move further to the right on some issues, overall he has been successful in implementing policies supported by much of the center-right.

He said that many Netanyahu supporters aren’t following the unfolding scandals closely, dismissing them as related to “empty soft drink bottles,” a reference to allegations that Netanyahu’s wife, Sara, illegally pocketed thousands of dollars in bottle deposits that should have gone into government coffers. Earlier this year the first lady was indicted for allegedly using $100,000 in state funds to order takeout from high-end restaurants despite employing a cook at government expense.

“He keeps on saying there’s nothing and that’s good enough for us at this point,” Ariel said. “And everyone saying you should leave [office] because your wife didn’t lick a stamp or whatever is just a joke from our perspective.”

Unlike some other Western countries, Israel’s political culture is not one in which “one such allegation surfaces and it kills the political career,” Plesner said. The further one moves to the right on the political spectrum, he said, the more likely they are to believe that corruption charges are “part of a conspiracy of law enforcement institutions which have an agenda.”

“If you think it’s a conspiracy it will affect your political behavior, and this might explain why Bibi is using conspiracy-type explanations vis-a-vis the police,” the Israel Democracy Institute’s chief said. “He sees polling that this resonates with his base.”

Not everybody is happy to ignore the whiff of scandal, and many can’t separate the accusations from Netanyahu’s policymaking. This week, some opposition members and pundits grumbled that Operation Northern Shield, which is targeting terror tunnels along the Israel-Lebanon border, was a way for Netanyahu to distract the public from the latest corruption allegations.

Ksenia Svetlova, a Knesset member from the opposition Zionist Union party, recalled when Netanyahu, as head of the opposition, called for then-Prime Minister Olmert’s resignation in the face of his own corruption scandal. Netanyahu alleged that Olmert could not handle the duties of his office while managing his legal defense.

Now, in addition to his role as prime minister, Netanyahu has also taken on the foreign affairs and defense portfolios at a time when his conduct is under scrutiny.

“Prime Minister Netanyahu should take advice from head of the opposition Netanyahu and act according to what he himself said,” Svetlova quipped.