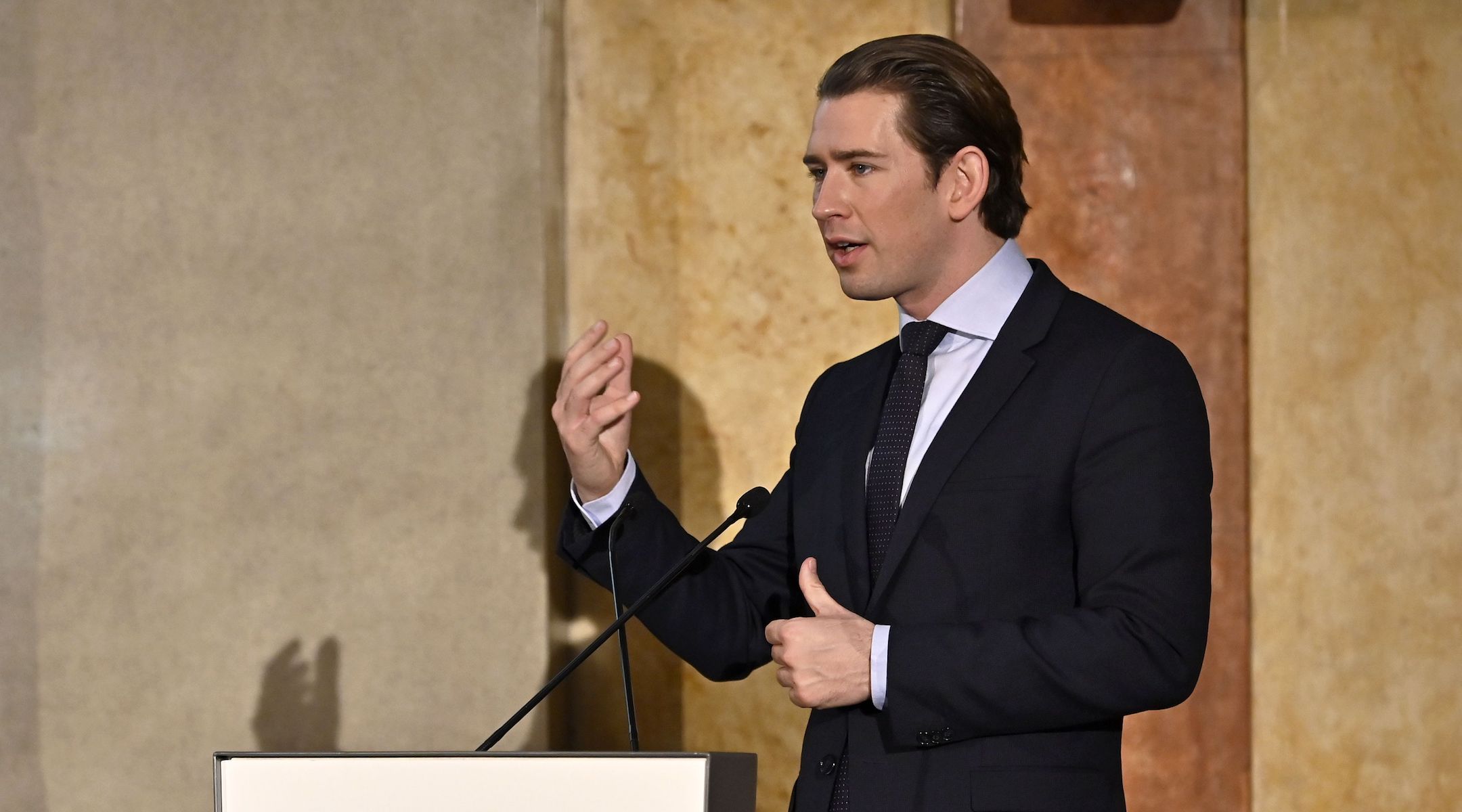 Austrian Chancellor Sebastian Kurz speaks at a conference on anti-Semitism in Vienna, Nov. 21, 2018. Kurz promoted a declaration by the European Union that stated its members should increase efforts to stem anti-Semitism. (Hans Punz/AFP/Getty Images)
Advertisement

(JTA) — European nations must increase their efforts to ensure security for the continent’s Jews in the face of widespread anti-Semitism, the Council of the European Union said in a declaration that one Jewish group called “unprecedented.”

The declaration passed Thursday in Brussels called on the council’s member states to develop a common security approach to better protect Jewish communities and their institutions.

Austrian Chancellor Sebastian Kurz, whose country holds the council’s rotating presidency of the council, promoted the declaration. The council is made up of the heads of state or government of the member states.

In its declaration, the council acknowledges that Jewish communities in some EU countries feel particularly vulnerable to terrorist attacks following an increase in violent incidents in recent years. It notes that anti-Semitic hatred remains widespread, as confirmed by the EU’s 2018 Fundamental Rights Agency report on anti-Semitism.

The declaration calls on member states to “adopt and implement a holistic strategy to prevent and fight all forms of anti-Semitism, as part of their strategies on preventing racism, xenophobia, radicalization and violent extremism,” according to a statement issued by the council. It also expresses concern that the situation for Jewish people has not substantially improved and that anti-Semitism can be disguised under the cover of political views.

The document also calls for an emphasis on  the importance of Holocaust remembrance and education for all.

The European Jewish Congress called the declaration “unprecedented” in a statement praising its passage.

“This declaration is an important step in the fight against antisemitism because it provides a positive and concrete roadmap for the safeguarding of Jewish communities and strengthens the legislative tools for governments to fight hate and intolerance,” the EJC’s president, Dr. Moshe Kantor, said in a statement. “Now we hope that each EU Member State will take the required and appropriate action, and that the European Commission and the European Parliament will monitor the progress made by each state against anti-Semitism. Today, we hope that the implementation of the provisions contained in this declaration will severely restrict the space for hate and that our Jewish communities will feel more safe in Europe.”

The World Jewish Congress said in a statement that it worked for several months with the Austrian government and European institutions, as well as the EJC, to draft the declaration. It praised the council for passing the declaration and called on the EU to appoint a coordinator on combating anti-Semitism.