In wake of attacks, settlers ratchet up pressure on Netanyahu government 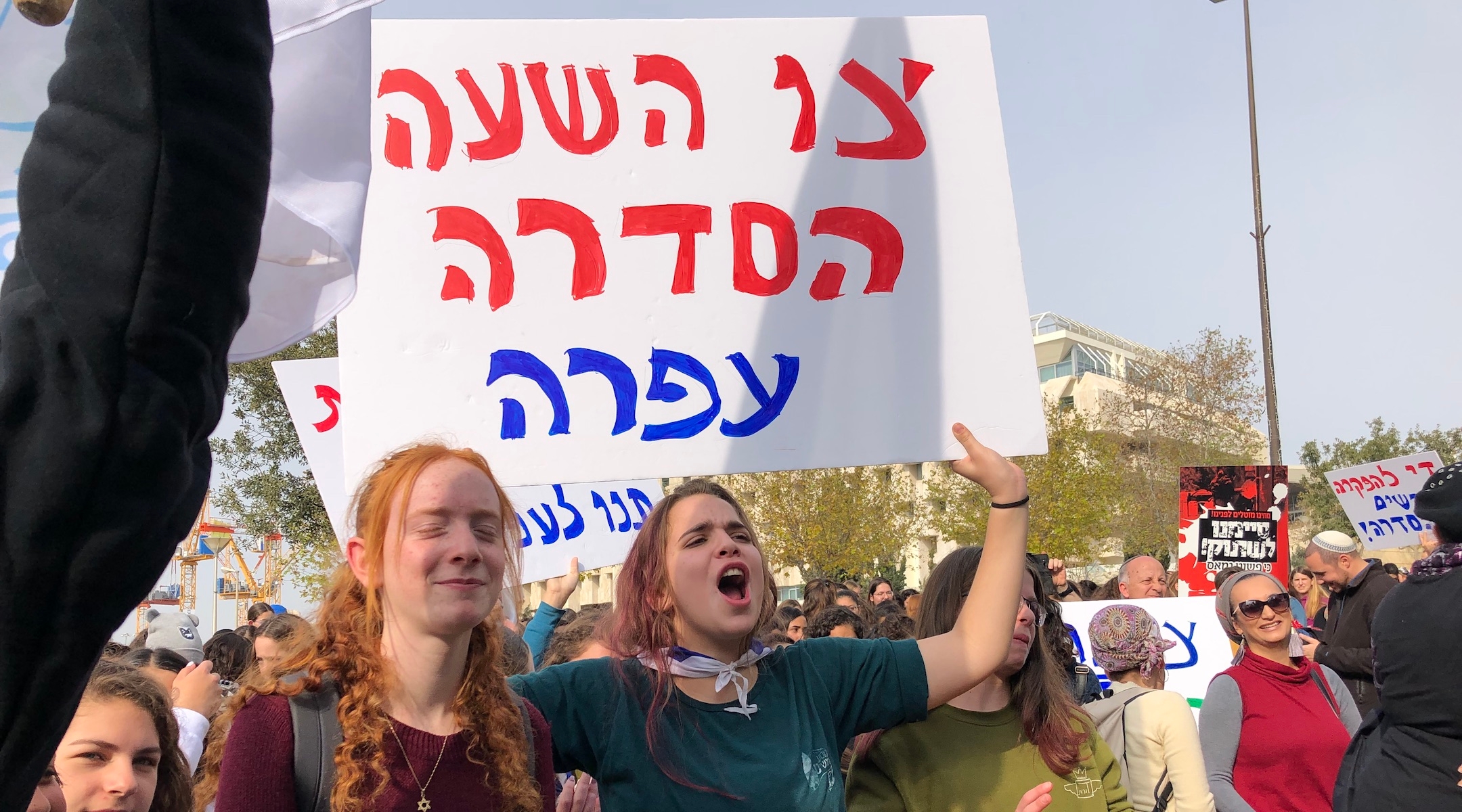 Protesters outside of the prime pinister’s office in Jerusalem screamed for “death to the terrorists” and held up signs calling for the retroactive legalization of settlements, Dec. 16, 2018. (Sam Sokol)
Advertisement

JERUSALEM (JTA) — Hundreds of Israeli settlers, mostly high school students, took to the streets on Sunday morning, heeding a call by leaders of the settlement movement to protest outside of the weekly cabinet meeting at the prime minister’s office in Jerusalem.

Waving placards bearing the slogan “We’ve finished being quiet because we are fed up to death,” the settlers vented their rage at the government after a wave of terror attacks rocked the capital and West Bank over the past week, wounding more than 10 and leaving three dead.

The violence and the settlers’ rage is ratcheting up the pressure on Prime Minister Benjamin Netanyahu and his government, which is simultaneously pro-settler but wary of inflaming an already tense situation. Likely responding to that pressure, both among the populace and within his own coalition, Netanyahu announced on Sunday that he had ordered the acceleration of the demolition of terrorists’ homes and revoked work permits for their clans.

“I have directed that the status of thousands of homes in settlements in Judea and Samaria be legalized, that two new industrial zones be established near Avnei Hefetz and Betar Ilit respectively, and that 82 new residential units be approved in Ofra. There will be other steps,” he said.

Meanwhile, the Ministerial Committee for Legislation voted to advance a bill to legalize dozens of West Bank settlements, and settlers set up mobile homes at the previously evacuated Amona outpost.

But the protesters are demanding more: a more aggressive military response, much wider settlement construction and even the dismantlement of the Palestinian Authority.

“Death to the terrorists!” the crowd chanted in response. 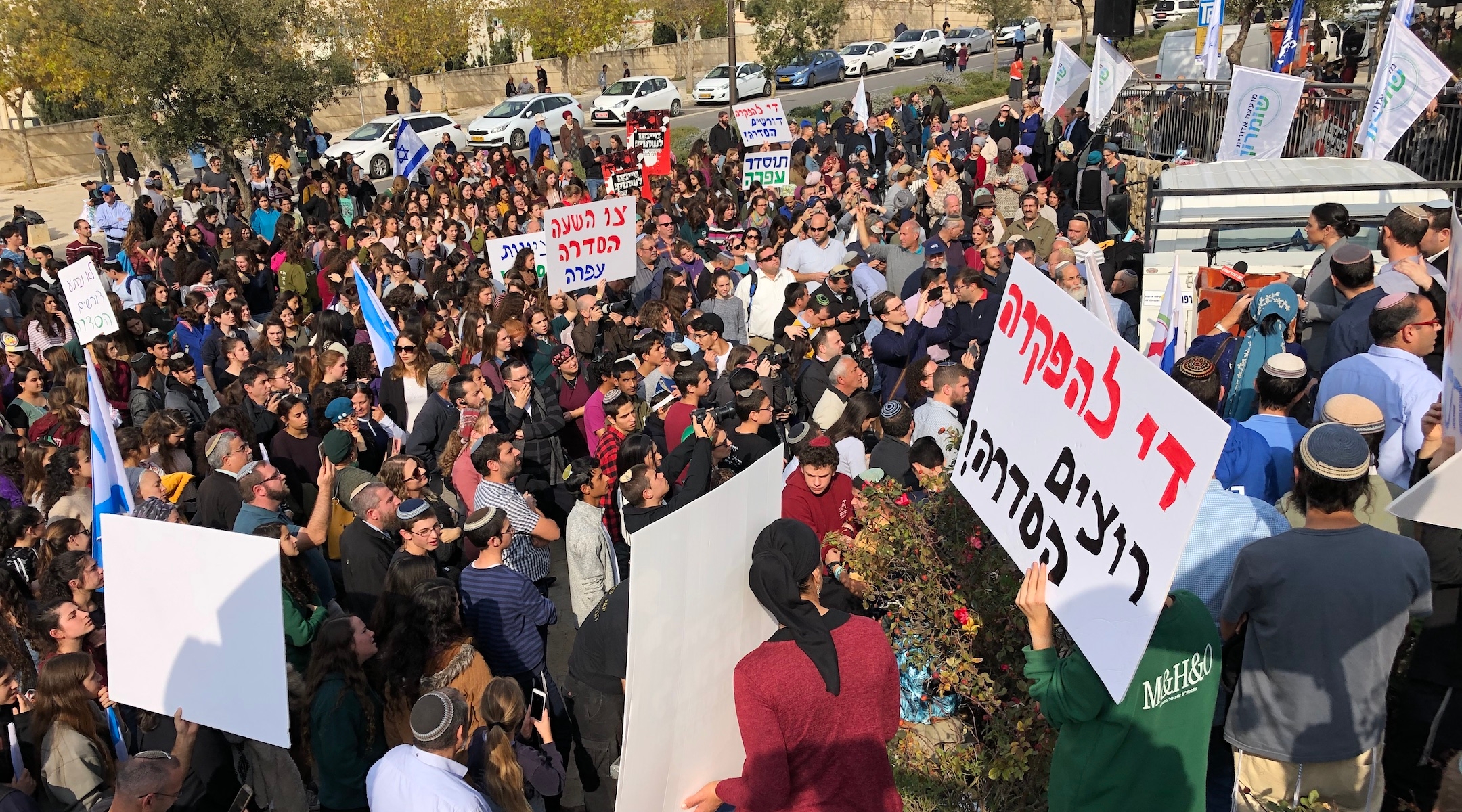 Hundreds of settlers, joined by members of the Israeli cabinet, protested outside of the prime minister’s office in Jerusalem, Dec. 16, 2018. (Sam Sokol)

Last week’s incidents include two drive-by shootings at bus stops outside of the Ofra and Givat Asaf settlements, a car ramming near Ramallah, the stabbing of two police officers in the Old City and the knifing of a soldier guarding Beit El.

In response, the leaders of several local councils in the West Bank called for a municipal strike on Sunday, shutting down schools and encouraging residents to flock to the capital to demand harsh action against the Palestinians.

“It’s important not to be quiet anymore,” said Hananel Dorani, who chairs Yesha, the umbrella body for West Bank settlements, in an interview with JTA. “We can’t be free from terror until we strengthen the checkpoints. We need a war on terror to break their [will]. We need to build more settlements. That’s the real solution.”

Speaking at the rally, Samaria Settlers’ Committee chairman Tzachi Dickstein called for the reestablishment of Unit 101, a disbanded IDF unit that carried out cross-border retaliatory raids during the mid-twentieth century in response to Arab fedayeen attacks on Israeli civilians.

“The IDF needs to avenge our dead. We need the death penalty for terrorists and to expel their families,” Dickstein said.

Demanding that Israel also disband the Palestinian Authority, Dickstein too was met with loud calls of “death to the terrorists.”

The “Zionist answer” to terrorism, he called out, was “building more settlements.”

Nine separate members of Prime Minister Benjamin Netanyahu’s cabinet came out to address the demonstration and express their solidarity with its goals, in effect protesting against themselves as the framers of Israeli government policy. Several members of the cabinet, including Tourism Minister Yariv Levin and Science Minister Ofir Akunis, echoed the settler leaders’ call for increased construction in the territories, with Akunus calling for a “war on barbaric terror” and denying “animalistic men coming from Ramallah.” He said it was critical to destroy the houses of terrorists and to expel their families as a deterrent to others.

In a barely veiled dig at Israel’s judiciary, long a bugbear of Israel’s right, Education Minister Naftali Bennett, head of the national-religious Jewish Home party, told the settlers that Israel was fighting terror with its “hands tied behind our back because of fake law and fake morality.” Stating that Netanyahu had expressed opposition to expelling the families of terrorists, Bennett, who has repeatedly challenged Netanyahu’s decision to keep the defense portfolio for himself, said that this time “we are not backing down.”

Not everyone agreed with the tenor of the rhetoric, however. Naftali Sand, a resident of Ofra, said that many Arabs in the West Bank were perfectly civil but that it was important to deter those interested in carrying out attacks. Sand noted that the the chants calling for killing Palestinian militants came from the youth, who are often more extreme than their adult counterparts but grow more moderate as they get older.

This was a sentiment shared by David Ha’ivri, an member of the Samaria Regional Council who did not attend the demonstration.

“I share their pain and frustration,” he said of the demonstrators. “Chants shouted at protest rallies are meant to grab attention and vent some rage, but might not always describe the most partial steps that can be taken by the government.” 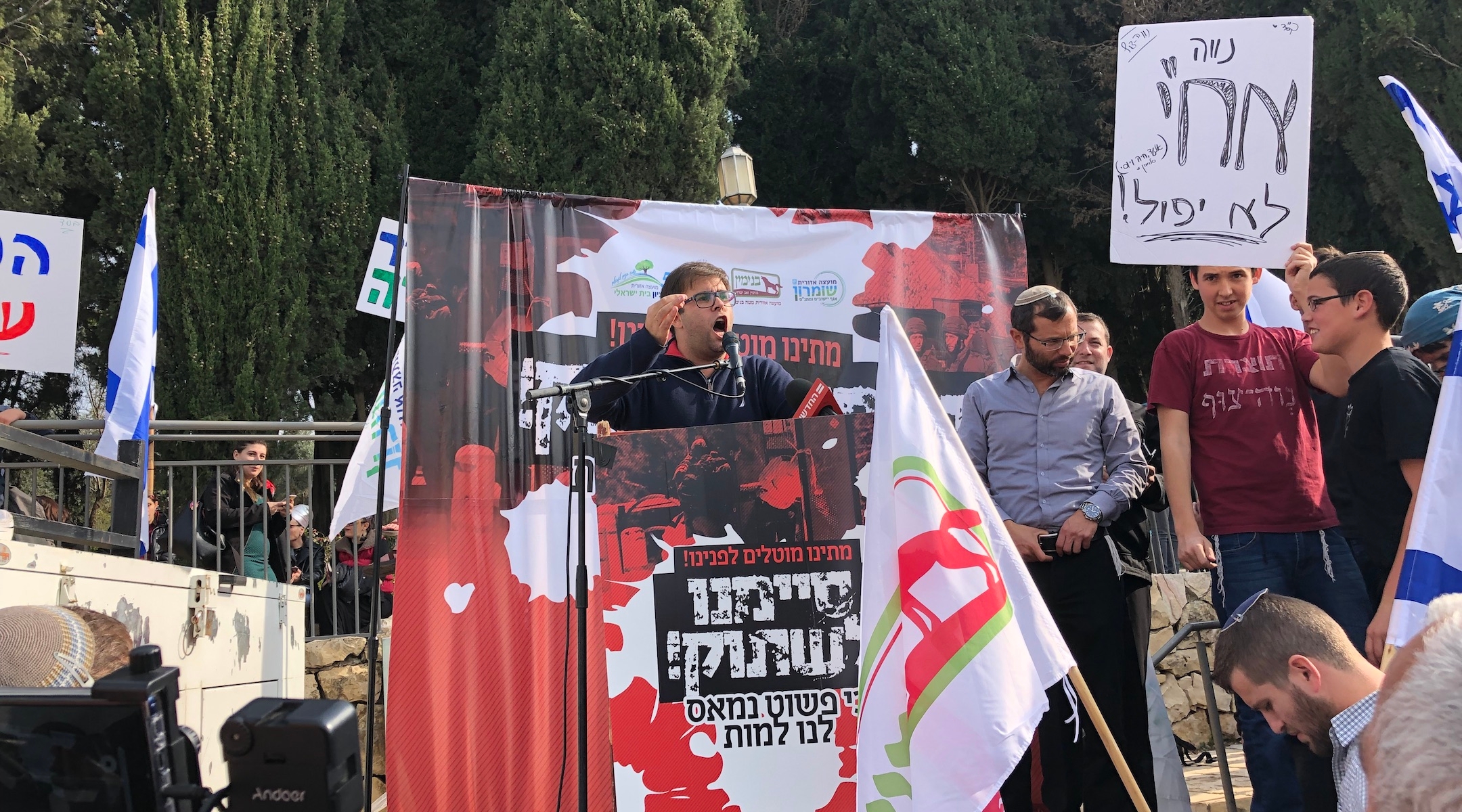 Addressing settlers in Jerusalem on Sunday, controversial right-wing lawmaker Oren Hazan demanded Mahmoud Abbas’ head and said that for every soldier killed the blood of a thousand terrorists must be shed. (Sam Sokol)

Some have begun translating their anger into violence, however. In recent days posters have gone up across the disputed territories calling for the assassination of Palestinian President Mahmoud Abbas. On Saturday settlers outside of Beit El clashed with riot police who were attempting to stop them from stoning Palestinian cars. Two soldiers from the haredi Orthodox Netzach Yehuda battalion attempted to intervene and prevent the police from arresting the stone-throwers, leading to blows being exchanged between Israeli forces. Two of the victims of last week’s violence were members of the battalion, which is stationed in the area.

The rising tensions also led to angry words between Samaria Regional Council head Yossi Dagan and opposition politician Tzipi Livni, with Dagan screaming “Why do you hate me? Why do you hate us? What have we done to you,” at the former Foreign Minister during a tour of Ofra on Sunday.

Meanwhile, on Sunday afternoon, life appeared normal in Beit El, with residents going about their daily lives with little sign of the tension gripping the community.

Hadassah, another resident, disagreed, saying that while she believed building was necessary, it was not a solution to terror.

“I’m scared. The government is not doing enough to protect us. They’re scared what the United States, the left and the world will say. Building isn’t the answer,” she said. “We need to kick out the terrorists before they engage in terror. What are we waiting for? We need to be smart and quiet, we don’t need to speak about violence.”

Nearby, at the bus stop outside the community of Givat Asaf where Netzach Yehuda servicemen Yosef Cohen and Yovel Mor Yosef were shot to death last week, armed soldiers in full combat kit stood behind concrete barriers as hitchhikers stood clustered near a makeshift memorial.

“We worry but we have to man up,” said Efrat, a young woman trying to flag down a ride. “We have to get home. At first I said I won’t stand here but there is nothing to do.”

On Sunday afternoon, a woman was hospitalized after Palestinian rock-throwers attacked her car in the West Bank, pelting her with stones and broken glass. 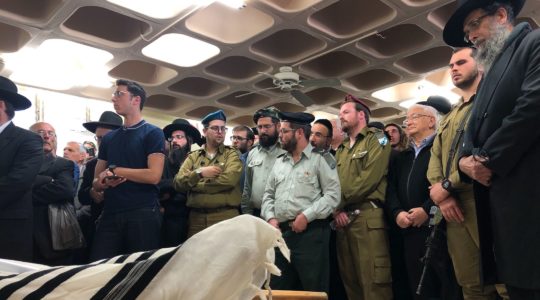