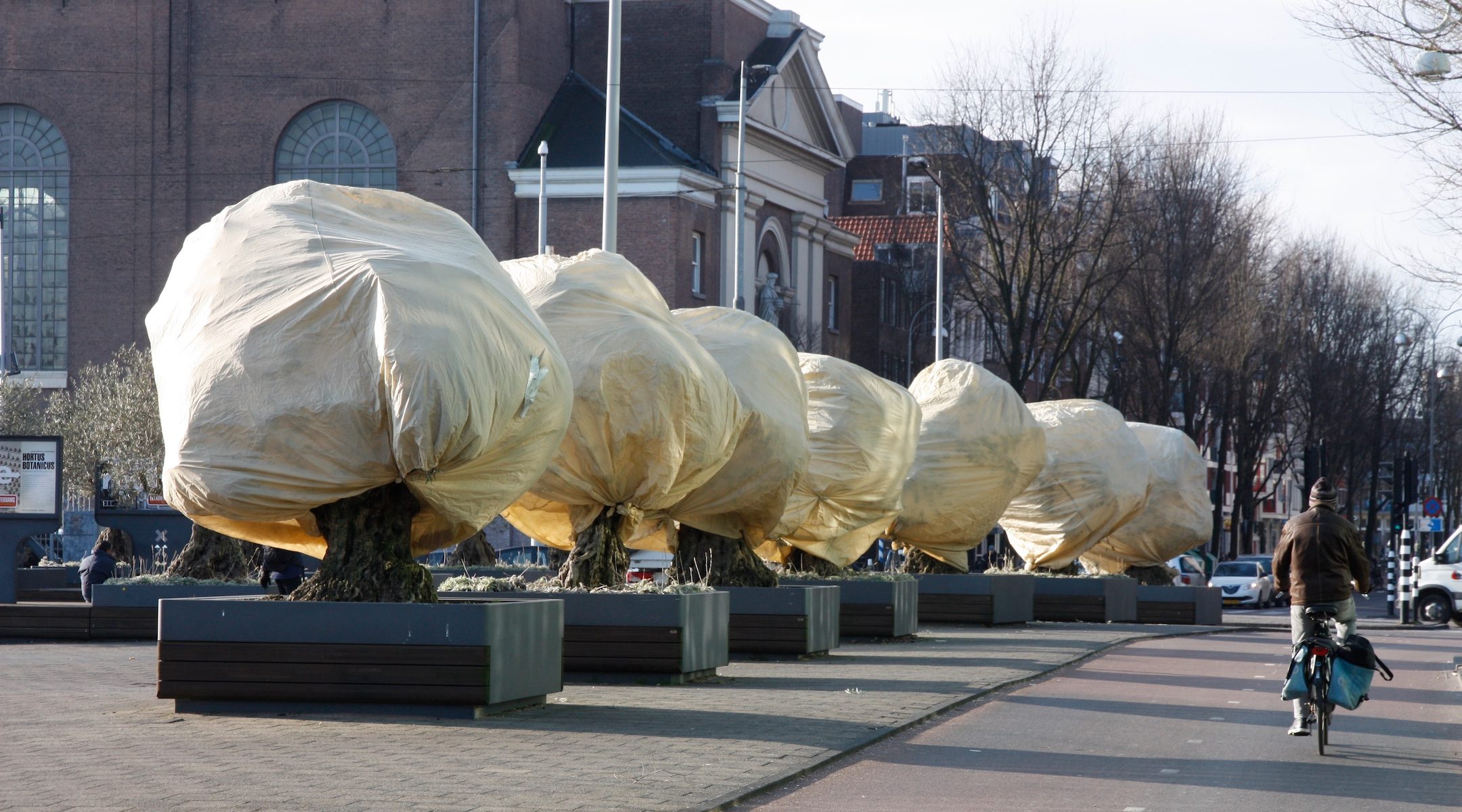 The olive trees outside of Amsterdam's Portuguese synagogue get wrapped up every year. They are shown here in February 2018. (Hans Kaljee)
Advertisement

AMSTERDAM (JTA) — Each year at the height of winter, city workers descend on the square opposite Holland’s oldest synagogue and pull gigantic yellow tarps over the canopies of 25 olive trees.

The trees, each 250-300 years old, are Amsterdam’s oldest. They were brought here in 2010 from central Spain and planted on the square in recognition of the olive’s significance in Judaism. But the wrapping up ritual, which the city performs before the onset of cold eastern winds, leaves them looking more like mammoth mushrooms or hot air balloons than biblical symbols.

Some tourists witnessing the spectacle hypothesize that it’s an art project raising awareness to plastic pollution.

Israelis visiting the adjacent Portuguese Synagogue in the old Jewish Quarter of Amsterdam sometimes assume a connection to Tu b’Shvat, the Jewish holiday celebrating trees and fruits, which this year falls on Jan. 20 and often coincides with Amsterdam’s bizarre tucking in of the trees.

In reality, though, the annual operation is a purely practical endeavor designed to prevent the cold and windy winters of northern Europe from killing the trees, which, like the Sephardic founders of the synagogue, came here from the mild climate of the Iberian Peninsula.

Gardening challenges notwithstanding, the olive grove that now grows on the square named for Lodewijk Visser, a Holocaust-era leader of Dutch Jews, is a powerful and unique monument to the ability of Judaism to survive after being replanted from Europe’s south, and where it had been nearly uprooted by the Nazis.

But the trees’ story also underlines recent shifts in ethical approaches to landscaping and sustainability — which some believe may spell an uncertain future for the olive trees.

“It was certainly symbolic,” said Hans Kaljee, the City of Amsterdam’s consultant on trees, about the placing of the trees, which took place before he assumed the position. “Today, I don’t see how I’d explain why we need to pay tens of thousands of euros to uproot a whole grove in Spain and transport it here. The environmental issues alone make it hard to justify.” 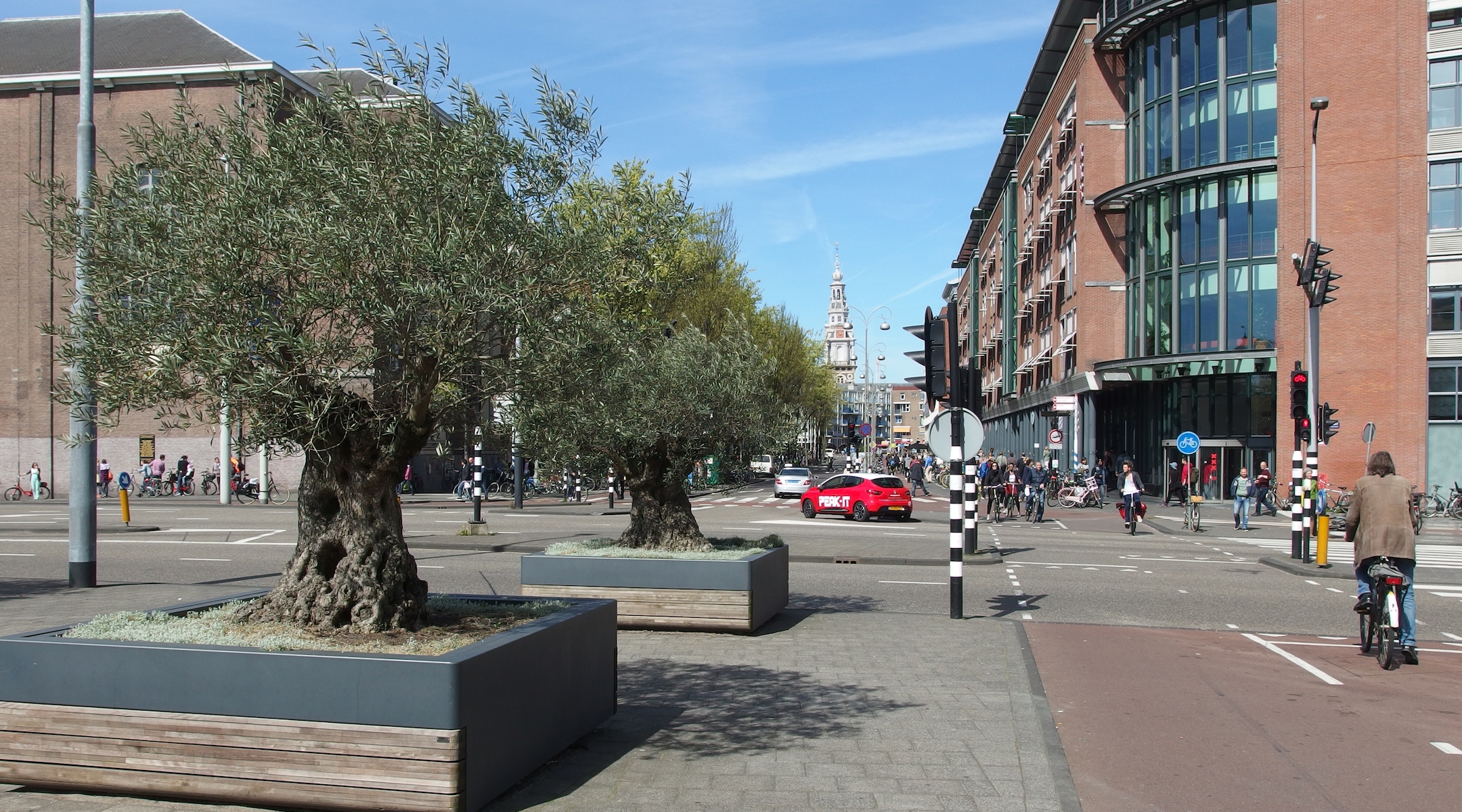 The trees were bought for approximately $3,000 a piece and placed in especially designed planters, featuring double walls that offer the root systems extra access to water and relief from the freezing winter cold in Amsterdam, whose latitude is slightly to the north of Saskatoon, Canada.

But already at the time of their purchase, some Spanish activists were protesting the shipment abroad of trees that became more profitable to uproot than harvest because of their popularity with consumers in richer economies.

In addition to the carbon footprint of transporting these giants thousands of miles, there are other environmental concerns about doing so. In their native environments, the creviced and hollow trunks of old olive trees sustain wildlife such as rodents, owls and even foxes, which lose their homes when the trees are uprooted.

The plants themselves don’t seem to be doing too well in the Dutch climate, largely because they don’t shed their leaves and continue to lose moisture throughout the winter.

Their green canopies stand out against the winter nakedness of local species, but they would dry out within three weeks if not for the yellow wrapping material, a breathing membrane to block wind that was imported for them especially from Switzerland. Even so, they hardly produce any fruit here.

In recent years, Spain has seen the eruption of a deadly and cold-resistant plant infection that is ravaging olive groves there after it jumped over from cocoa plantations in Latin America. Introducing even a single infected plant to Holland could mean heavy damage to the country’s pear and apple farmers.

“On that ground alone, I don’t think anyone would okay such an operation today,” Kaljee said of the olive tree grove.

In 2010, Ton Boon, a municipal spokesperson, called the operation an “experiment.” The city, he added, was able to buy “cheaply these biblical trees and place them where the Jewish Quarter used to stand.” If the experiment succeeds, Boon said, Amsterdam will receive additional olive trees. To date, this hasn’t happened.

Just keeping the plants alive costs about $850 a year per tree, which the city pays to an external contractor that specializes in exotic plants. That’s more than seven times the expenditure of an average large tree in Amsterdam, which has about a million of them. 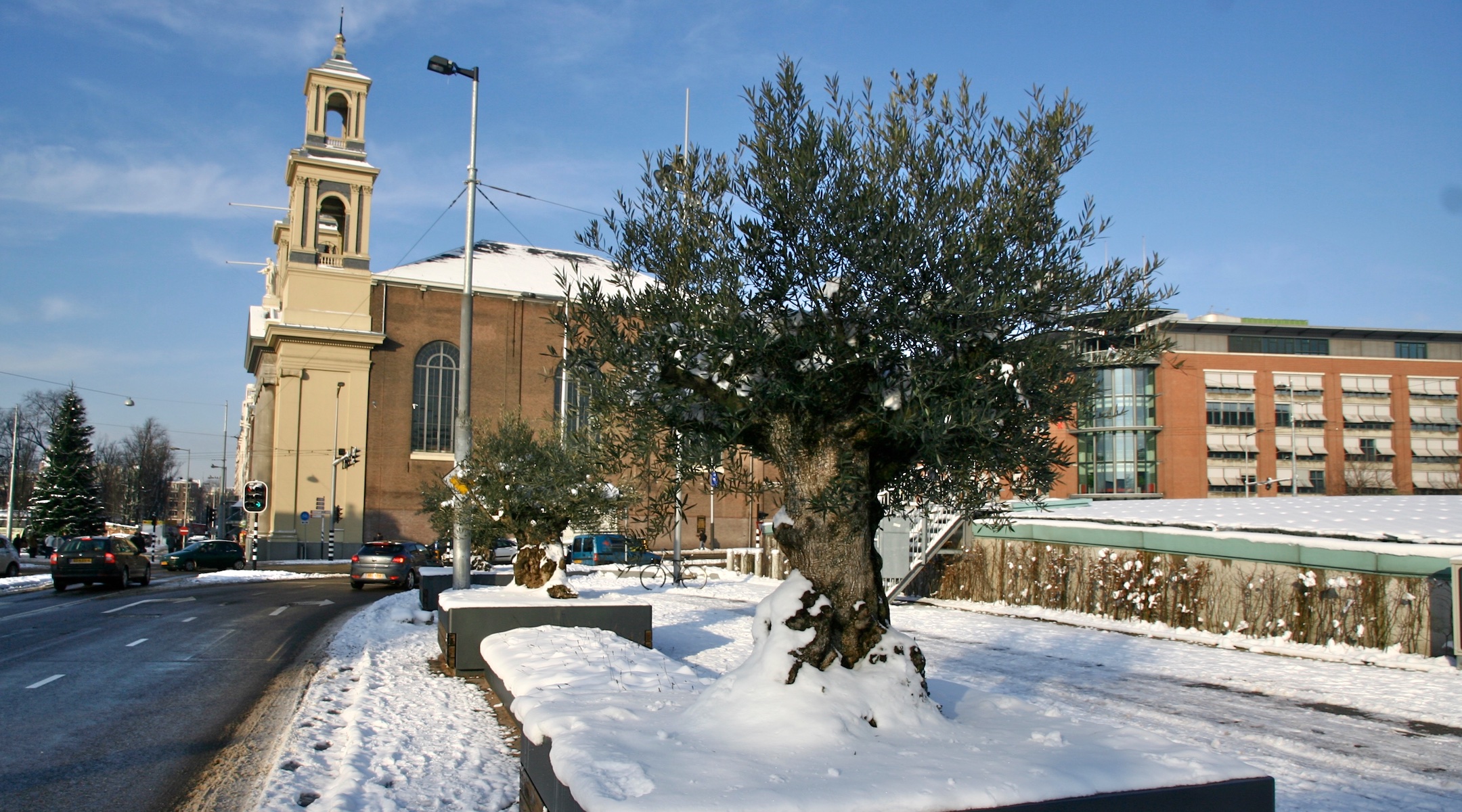 The trees shown in the snow in January 2017. (Hans Kaljee)

Amsterdam’s municipality has plenty of experience with helping trees survive.

That’s because the entire city is built on swampland, much of it reclaimed from the sea. But the water is still there in the ground, just three feet below the soggy surface. Constantly shifting and sinking, Amsterdam’s muddy soil is responsible for the old buildings that stand or lean on others at alarming angles, sometimes appearing near collapse.

This challenge may be the reason that Amsterdam in the 16th century became the world’s first city to plant so many trees on public property, according to Kaljee. “It looked nice and it had the added value of growing firewood, but the main reason for this innovation probably was to have the roots stabilize the banks of the canals,” he said.

It made Amsterdam one of the world’s greenest cities.

But it created another complication, because the trees here have roughly two feet in which to develop their root systems. As they grow older, most trees here find it increasingly difficult to support their own weight in the fast-sinking soil, leading to collapse — and municipal interventions to prevent it.

This is why in Amsterdam, which was founded about 750 years ago, the oldest trees are the ones at the Visser Square, by at least 50 years.

The olive trees may well continue to live another hundred years or more there, Kaljee said.

But the square, which was built in 1968 over a disused viaduct, has potential that its current design doesn’t quite fully realize, Kaljee noted.

“There’s an abandoned space under it, there are trams crisscrossing it. I can imagine how city designers would want to change that, maybe transform it into a green park with tram lines running underneath,” he suggested.

When change comes, “the fate of the olive trees will again have to be decided,” he added. If the trees are made to go away on Kaljee’s watch, he said, “I will make every effort to find a new home for them where they can all remain together. In this country, doing so will not be easy.”