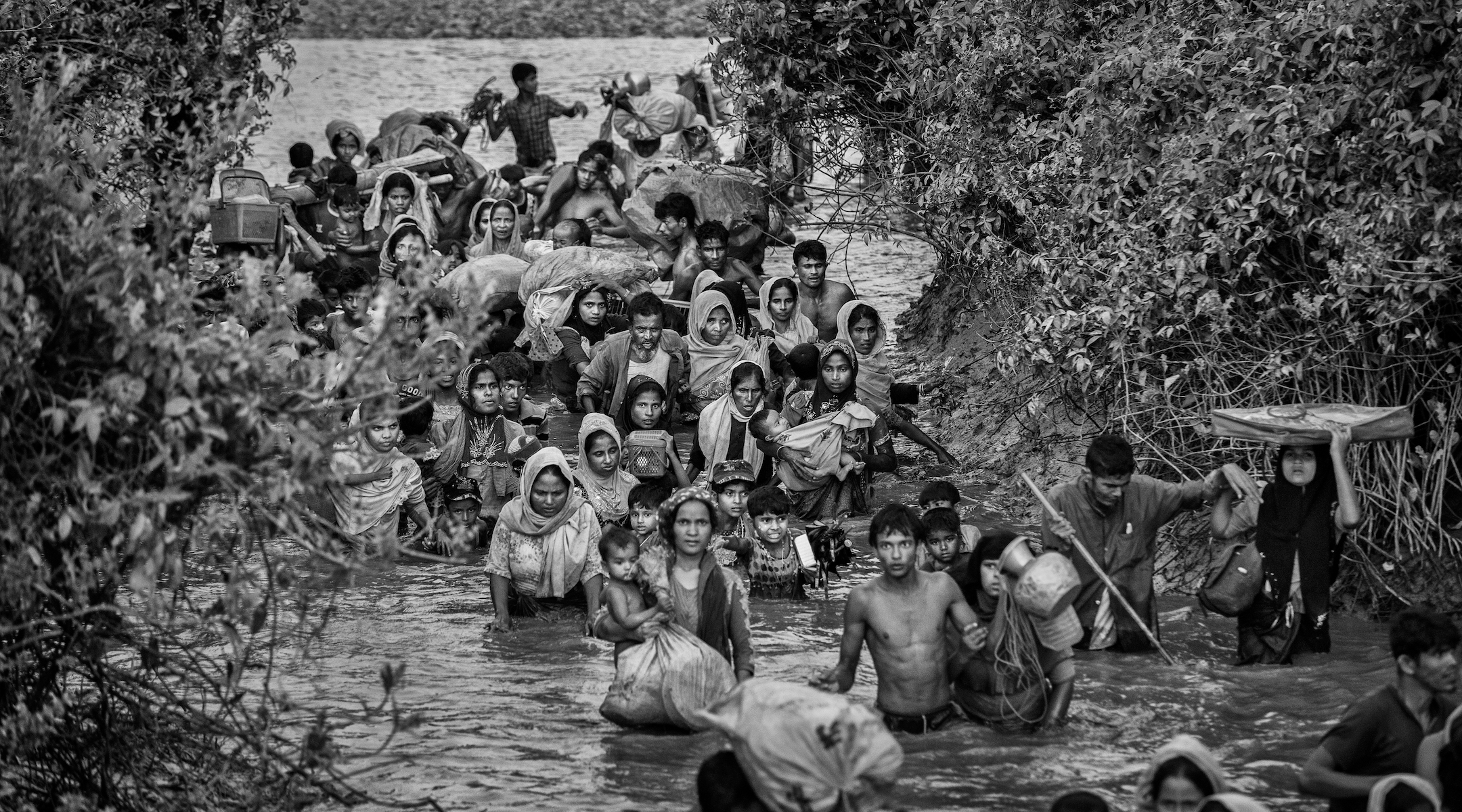 Rohingya Muslim refugees crowd a canal as they flee over the border from Myanmar into Bangladesh, Nov. 1, 2017. (Kevin Frayer/Getty Images)
Advertisement

This is the second article in a series about the Jews of Southeast Asia.

YANGON, Myanmar (JTA) — Myanmar’s treatment of its Rohingya Muslim minority has earned the country widespread condemnation in recent years. A United Nations investigator and the U.S. House of Representatives have warned that the Myanmar military’s recent ramping up of violence against the group constitutes genocide.

Last August, the U.S. State Department tallied atrocities in the Buddhist-majority country’s northern Rakhine State, concluding that violence there was “extreme, large-scale, widespread, and seems geared toward both terrorizing the population and driving out the Rohingya residents.” Some 1.1 million Rohingya have fled Myanmar.

Despite the widespread condemnation, however, Israel remains on friendly terms with Myanmar and has remained relatively silent on what even the U.S. Holocaust Memorial Museum has called “compelling evidence” of genocide in the country that straddles South and Southeast Asia.

What’s more, the Jewish state allowed its arms companies to sell weapons to Myanmar’s military through the fall of 2017, long after most Western countries had banned such sales by its firms. It remains unclear if the Israeli firms are still supplying Myanmar’s military with assistance besides weapons, including surveillance technology, training and intelligence.

Contacted by JTA, most of the firms refused to clarify on their current sales. One firm, TAR Ideal Concepts, refuted reports that it had sold arms to Myanmar.

“A general trend of Israel’s foreign policy is to give priority to interests over values,” David Tal, an Israeli historian who chairs the University of Sussex’s Modern Israel Studies program, told JTA. “Having good relations with Myanmar … I would assume is worth any moral price Israel accrues.”

Myanmar, then Burma, was Israel’s “first friend” in Asia. Both countries secured independence from the British in the same year, 1948. Burma’s first prime minister, U Nu, had a “soft spot for Israel” and was close with David Ben-Gurion, his Israeli counterpart. U Nu also was the first prime minister of any country to visit the Jewish state, doing so in 1955.

In 2011, Yaron Mayer, then the Israeli ambassador to Myanmar, told Moment magazine that Myanmar was “one of Israel’s few, true friends.”

In an interview with JTA in December, Ronen Gilor, the Israeli ambassador to Myanmar, noted the historical friendship and the nation’s geopolitically advantageous proximity to China and India — countries that have had limited relations with Israel.

“They respected Israel,” Gilor said. “This was a first for Southeast Asia, which was so important for us.

“Now,” he added, “Israel they know as a beautiful country.” 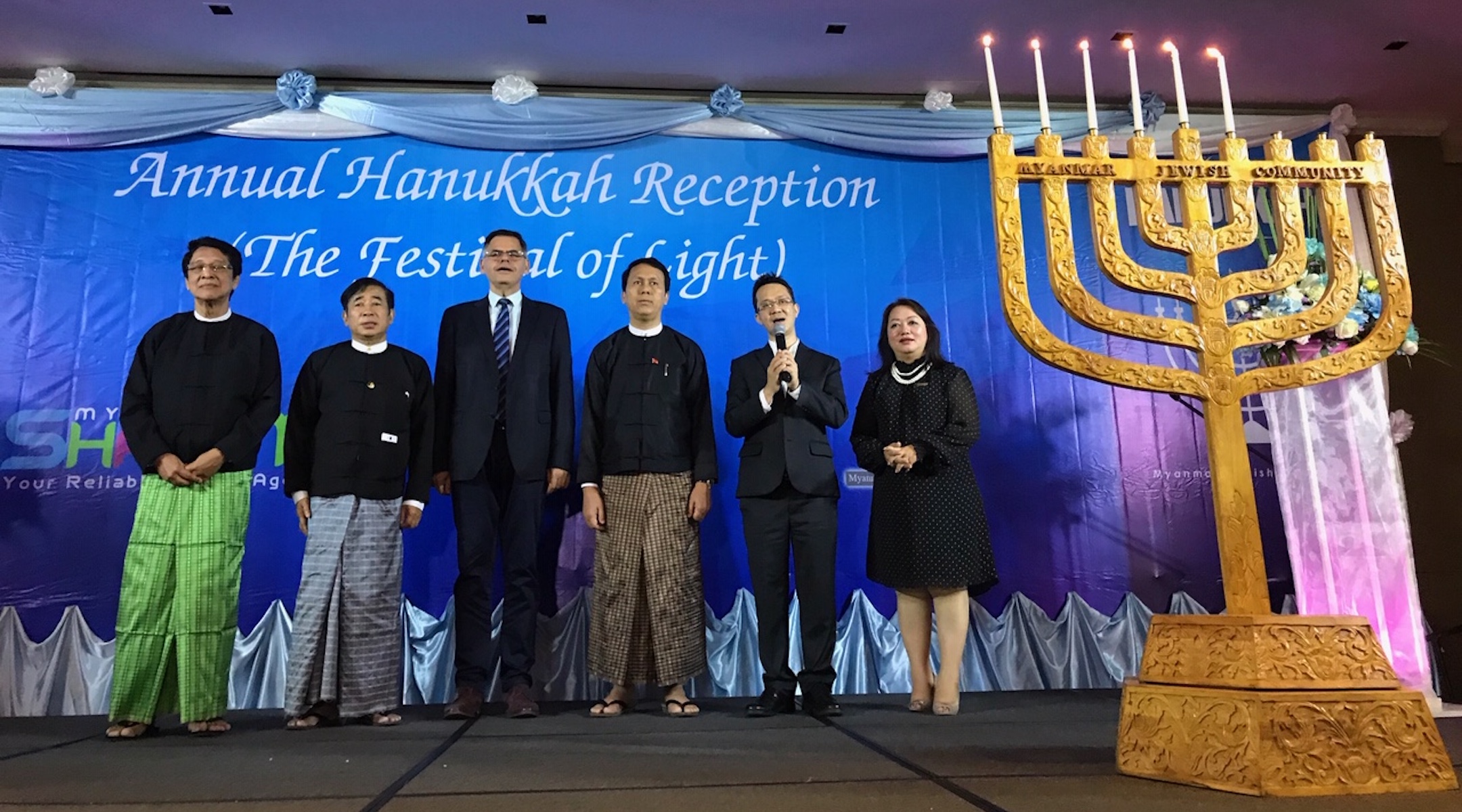 Israel’s Ambassador to Myanmar Ronen Gilor, third from left, appears at a Hanukkah event with Burmese leaders at the Chatrium Hotel in Yangon, Myanmar, Dec. 7, 2018. Phyo Min Thein, the chief minister of the Yangon region, is second from left. (Charles Dunst)

While relations waxed and waned, Israel always maintained an embassy in Myanmar and was one of the few countries to offer direct aid to the pariah state after Cyclone Nargis left 150,000 dead in 2008. Israel only stopped selling advanced weaponry to Myanmar’s military in 2017 following domestic and international uproar –– and a legal challenge that reached its High Court. (The court, at the behest of the government, kept its late December 2017 ruling secret.)

“According to our knowledge and understanding, there is no[t] any information and any updated data in such kind of field as your concerns,” the embassy wrote to JTA in an email. “If you would like to know further and more clarified data, facts and figures about those matters, you may approach the relevant institutions of the Israeli Side. Functions of the Myanmar Embassy in Tel Aviv are very well transparent in every area and also in bilateral cooperation between two countries.”

The issue of Israeli cooperation with Myanmar is, however, far from “transparent.” In December 2017, Myanmar’s ambassador to Israel, U Maung Maung Lynn, said that Israel was still selling weapons to his country. Israel promptly reprimanded and “rebuked” the ambassador, who soon apologized and retracted his statement.

Israel’s Ministry of Defense, when contacted by JTA, provided no clarification on current military exports to and cooperation with Myanmar.

“The defense export policy of Israel is constantly examined according to various considerations, including human rights status in the target country, as well as the policy of the UN Security Council and other international authorities,” the ministry wrote in an email.

Gilor in an interview with JTA refused to answer questions regarding Israeli cooperation with Myanmar’s military, saying that they were not related to the topic of JTA’s requested interview: the relationship between Judaism and Myanmar.

“I cannot see the connection,” the ambassador said when asked about military cooperation. He said the same thing when asked about Israeli officials’ refusal to utilize the term “Rohingya.” (Myanmar rejects the term and does not recognize them as citizens, instead considering them to be “Bengalis” or foreigners.) 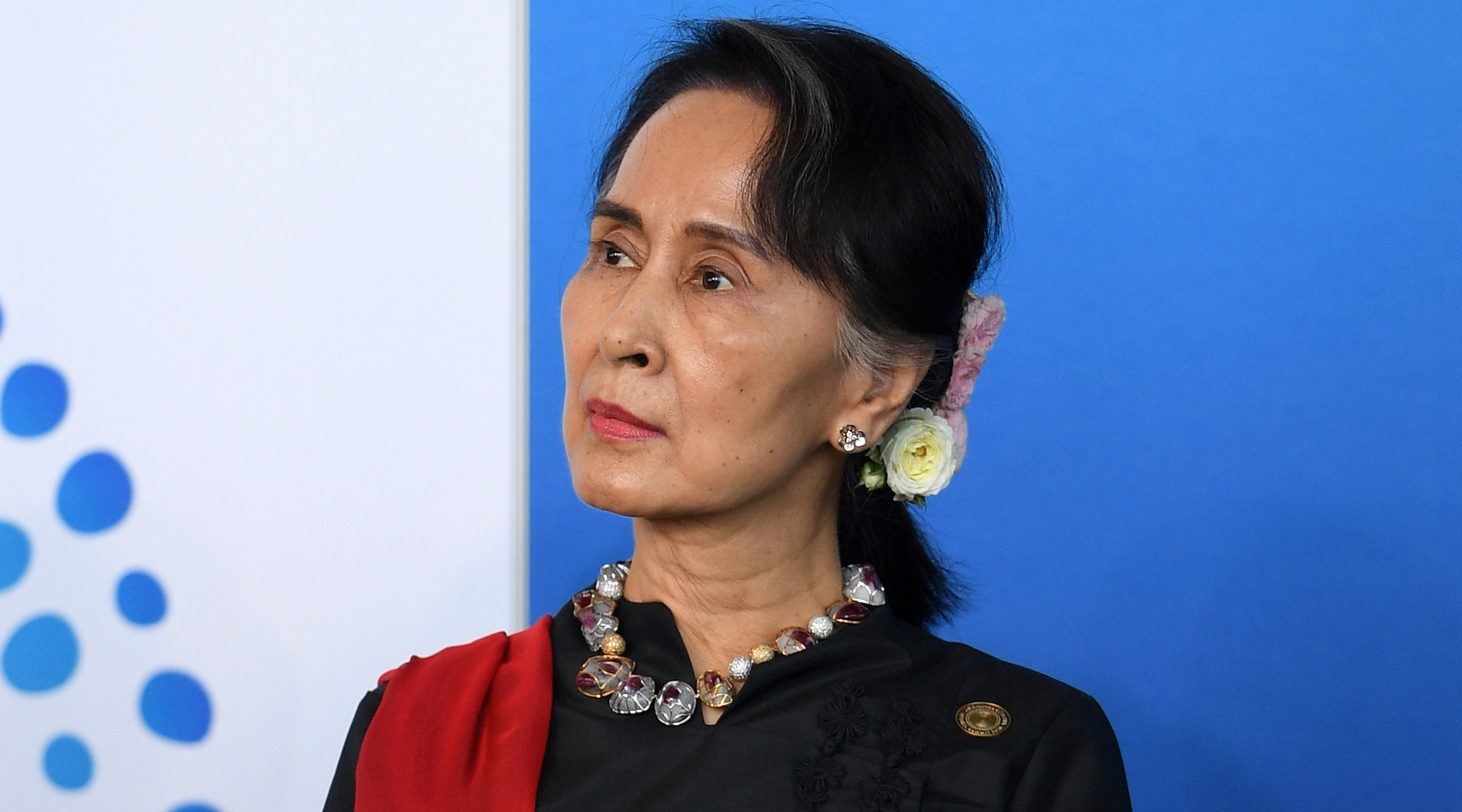 But Sammy Samuels, the de facto leader of Myanmar’s Jewish community, told JTA that the Burmese largely consider Israel and Judaism to be inseparable.

“The Burmese population, if you tell them ‘Judaism,’ they don’t know, but if you tell ‘Israel,’ they feel like Israel is a religion. They fully respect Israel,” Sammy told JTA.

Israel has remained largely steadfast in its support for Myanmar’s civilian government, which is led by Nobel Peace Prize winner Aung San Suu Kyi. Her disdain for the Rohingya is well-documented, and human rights groups have criticized her widely for refusing to condemn the military’s actions.

In 2012, Suu Kyi said that she did not know if the Rohingya could be regarded as citizens, and she has refused to use the term “Rohingya.” Myanmar’s military leaders — over whom Suu Kyi wields no control — say their actions in the Rakhine State are a response to attacks by Muslim militants, including the Arakan Rohingya Salvation Army, who they say have a separatist agenda and are funded by foreign groups.

Gilor refused to speak with JTA about the Rohingya issue, although a few days before he spoke more openly with Mizzima, a Myanmar news site.

“Humanity is full of conflicts, and along the way of the democratization of Myanmar you also have conflicts that you have to solve,” Gilor said of the Rohingya crisis. “It is not easy — you have the media, you have the international community, you have expectations of all kinds.”