An idiot’s guide to anti-Semitic tropes 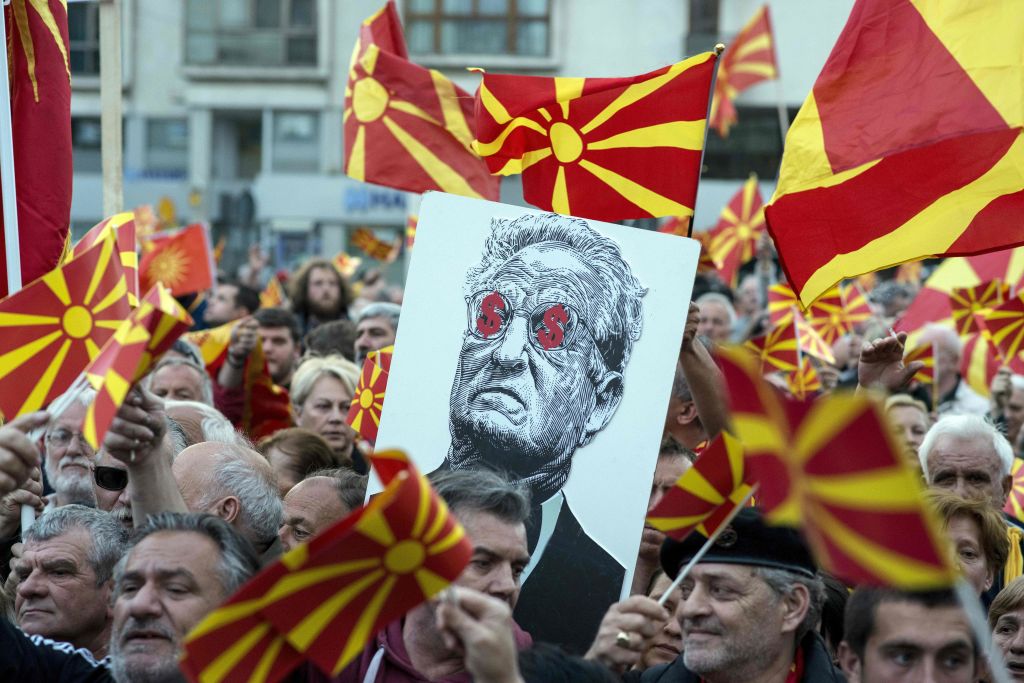 Protesters in Macedonia hold a placard depicting billionaire George Soros with dollar signs for eyes during a demonstration against a deal between the country's Social Democrats and the Albanian Democratic Union for Integration. (Photo by Robert Atanasovski/AFP/Getty Images)
Advertisement

I am an elected official in a large democracy in the Western hemisphere. A lot of my colleagues have gotten into trouble recently for using anti-Semitic “tropes.” I know what anti-Semitism is, but am less sure how that differs from a “trope.” Any guidance so I don’t inadvertently say something offensive?

I understand your confusion. This has been the era of the anti-Semitic “trope,” with the word popping up in hundreds of news stories since the 2016 campaign. In short, tropes are phrases or images that evoke classic anti-Semitic ideas rather than state them explicitly. It’s a long list: the dual loyalty trope, the blood libel, the clannishness charge, the global conspiracy motif and the control-the-media mantras (to name a few).

When Donald Trump’s closing argument at the end of the 2016 campaign invoked “the global special interests” that “don’t have your good in mind” — and then featured images of a financier, a banker and the chair of the Federal Reserve, all Jews — he was accused of employing the “trope” of Jewish global control.

When Hungary’s government ran a campaign against the pro-democracy philanthropist George Soros featuring his smiling face and the slogan “don’t let him get the last laugh,” some said it recalled the Nazi-era trope of the “laughing Jew.”

And this month, when freshman Rep. Ilhan Omar complained that U.S. policy toward Israel is “all about the Benjamins, baby,” politicians and observers insisted that the Minnesota Democrat had invoked age-old stereotypes of Jewish power and control (“Benjamins,” as in Ben Franklin, as in the face on the $100 bill).

The Anti-Defamation League responded, “The notion that wealthy Jews are controlling the government is a longstanding anti-Semitic trope and one of the pillars of modern anti-Semitism.”

House Speaker Nancy Pelosi, D-Calif., and the entire Democratic leadership issued a joint statement calling Omar’s “use of anti-Semitic tropes and prejudicial accusations about Israel’s supporters” deeply offensive and insisted on an apology. They got one.

Anti-Semites usually make it pretty easy for us to identify them. They scrawl a swastika on Jewish gravestones. They bluntly describe Jewish conspiracies and quote the classics of anti-Semitism like “Mein Kampf” or “The Protocols of the Elders of Zion.” They make it clear that “no Jews are allowed.”

But “tropes” are anti-Semitism once (at least) removed. Intentional users employ a trope as code hoping to avoid the anti-Semitism charge while dog-whistling their audiences. (The Hebrew expression for such circumlocution is “hamevin yavin” — literally “those who understand will understand” or, as Rabbi Eric Idle put it, “Wink wink, nudge nudge, say no more, say no more.”)

Tropes are often easy to identify because they can be deployed unknowingly by those who couldn’t accidentally, say, deface a synagogue.

As a result, tropes allow those charged with anti-Semitism a degree of deniability. The Trump campaign, you’ll recall, insisted that “globalist” is a catch-all term for someone who doesn’t put America first and that those who say otherwise are paranoid. When Rep. Rashida Tlaib said that backers of a series of pro-Israel bills “forgot what country they represent,” defenders of the freshman Michigan Democrat said the targets of her tweets weren’t even Jewish.

Similarly, Omar’s defenders insist she was merely pointing out a truth that is universally acknowledged: that lobbying groups like the American Israel Public Affairs Committee raise and spend a lot of money to influence the political debate. Why is it OK to point out the NRA’s spending to influence the gun debate but anti-Semitic to note the way AIPAC helps shape Middle East policy?

The answers may lie in the user’s track record. Omar had previously tweeted out an anti-Semitic trope: She wrote of Israel having “hypnotized” the world, which touched on a trope as old as the “Protocols” of Jews mesmerizing governments into submission. Local Jewish leaders say they have tried to explain to Omar the ways one can criticize Israel without tripping on a trope, but are disappointed that she hasn’t been listening.

Similarly, the Trump campaign already was under scrutiny for trafficking in all kinds of dark memes popular on the bigoted “alt-right.”

The “laughing Jew” motif may not be as obvious to a North American audience as other tropes, but members of the far right in Europe are certainly aware that the “laughing Jew” was a frequent theme of Adolf Hitler’s speeches. As two historians pointed out in Haaretz, Hitler often accused Jews of  laughing at good Aryans and declared that he would silence their laughter forever.

Of course, it is possible to partake of a trope without meaning to. And sometimes Jews hear anti-Semitic intent where none is intended or deploy outrage as a political tactic.

And sometimes bigotry is in the ear of the listener. Trump is the ultimate test case in this regard. Since Trump rarely if ever comes out with something explicitly racist or bigoted, we’re all left to argue over whether the things he says are offensive by intent, by effect or not at all.

This week The Washington Post crowdsourced those debates in a column asking readers to rate Trump’s comments on a low-to-high scale of offensiveness. The examples are a refresher course in the ambiguity of tropes. When Trump singled out Rep. Maxine Waters, the African-American Democrat, as “low IQ,” was he being typically insulting or trafficking in stereotypes about the intelligence of blacks? When he questioned the impartiality of a Mexican-American judge overseeing a lawsuit against Trump University, was he genuinely seeking recusal or suggesting that the children of Latino immigrants put their loyalty to their homeland and ethnic group ahead of their responsibilities as citizens?

My favorite Trump Rorschach test involved his comments to the Republican Jewish Coalition in 2015. Last week, in a discussion of the Omar controversy, CNN’s Jake Tapper said sardonically that Trump also used the “Jews and money” trope in talking to the RJC (and then, Tapper complained, had the chutzpah to call on Omar to resign over the same offense). Here is what Trump told the RJC:

“I’m a negotiator like you folks, we are negotiators. Is there anybody that doesn’t renegotiate deals in this room? This room negotiates them — perhaps more than any other room I’ve ever spoken in.”

“You’re not gonna support me because I don’t want your money. You want to control your politicians, that’s fine.”

Pretty trope-y. But here’s the thing: After Trump made his negotiators “joke,” the Jewish crowd roared with laughter. Stereotypes — including the one that Jews are shrewd negotiators — are the basis of a lot of humor. They only become tropes when you don’t trust the purveyor. The RJC’s laughter suggested its members were inclined to see Trump’s words as lighthearted. As for the “You want to control your politicians” line, Trump’s defense is that he was telling this to big political donors on all his campaign stops under the populist pretense that he was going to self-fund his campaign and reject their money and influence.

Or not. Trump has a talent, or perhaps an unconscious tendency, for straddling the very fine line between offensiveness and deniability, which makes him either the Yo-Yo Ma of the dog whistle or a sort of 21st-century Chauncey Gardiner, whose audiences hear what they want to hear.

But back to the original question: How do you keep from inadvertently saying something offensive?

Ask yourself: What are the worst things said about any one ethnic group or minority? Not sure? Ask them. And do this: If they say something offends them, believe them. Don’t explain the many ways they shouldn’t take offense or that they are being oversensitive.