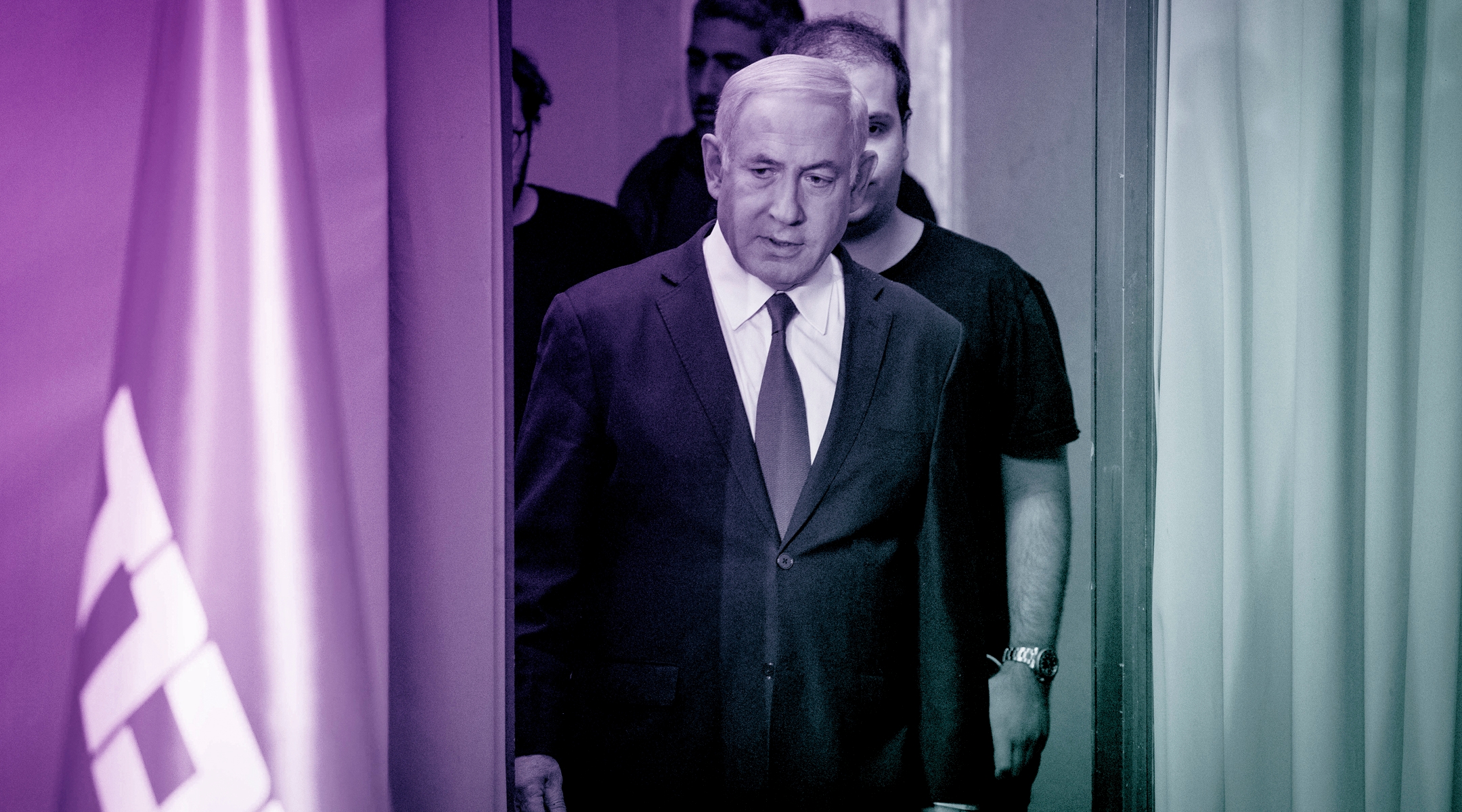 Israeli Prime Minister Benjamin Netanyahu walking into a press room to make a statement to the press in his offices in Jerusalem, Feb. 28, 2019 in Jerusalem, after Israel's Attorney General Avichai Mendelblit announced his decision to indict him for bribery, fraud and breach of trust in three separate cases. (Lior Mizrahi/Getty Images)
Advertisement

Netanyahu was indicted in three cases Thursday pending a court hearing. It’s the first time in Israel’s history that a sitting prime minister faces criminal charges. Oh, and elections are in fewer than six weeks.

What exactly is Netanyahu accused of? How is he defending himself? Does this mean he’ll lose the election?

Who is Benjamin Netanyahu, and what is he accused of?

Netanyahu, Israel’s prime minister for a decade, is up for re-election on April 9. He’s running for his fifth term. He was first elected in 1996 for one term, then returned to office in 2009 and hasn’t left. He leads the right-wing Likud party.

But he could be in trouble. After years of investigation, his country’s attorney general charged Netanyahu in three separate corruption cases. Two have to do with Netanyahu buying himself positive press, and the third alleges that he received illegal gifts from a rich donor. The Israeli Police have numbered them Case 1000, Case 2000 and Case 4000. (Don’t worry about 3000 — that investigation was dropped.)

Case 1000: Netanyahu is accused of accepting illegal gifts from Hollywood producer Arnon Milchan, including Cuban cigars and pink champagne. The gifts totaled about $200,000. In return, Netanyahu allegedly helped secure a U.S. visa for Milchan and supported a law that would give tax breaks to the billionaire if he moved back to Israel.

Case 2000: Netanyahu is accused of advancing a law that would have hurt one newspaper in exchange for positive coverage from a rival paper. In Israel, the two leading papers are Yediot Acharonot and Israel Hayom. Yediot is generally anti-Netanyahu. Israel Hayom is almost always pro-Netanyahu — and it’s also free, thanks to funding from the American casino mogul Sheldon Adelson.

Case 2000 alleges that Netanyahu made this deal with Yediot’s publisher: Netanyahu would support a law banning free daily papers — that would hurt Israel Hayom. In return, Yediot would give Netanyahu positive coverage.

Allegedly. But Netanyahu and the Israeli press don’t really get along. Like his ally, President Donald Trump, Netanyahu says the local press is out to get him. He accuses the media of being left-wing and dishonest, and likes to use the term “fake news” a lot. He doesn’t translate it: He just says “fake news” while speaking Hebrew.

That’s a big part of his defense: Since the investigations began a couple of years ago, he has attacked the media again and again for accusing him of corruption — seeking to depose him in court because he keeps winning elections.

Netanyahu does have a few allies in the media, including Israel Hayom, which has consistently supported him since it was founded by Adelson, a Netanyahu ally, in 2007. (Yes, this is the same paper he allegedly said he’d hurt through legislation. Kind of ironic.)

And this year, as part of his re-election campaign, Adelson launched a pro-Netanyahu TV channel.

How else is Netanyahu defending himself?

Defiantly. Since the investigations began in 2016, Netanyahu has insisted that “Nothing will happen — because nothing happened.”

In a speech following the announcement of the indictment Thursday, Netanyahu didn’t give an inch. He called the criminal proceedings a left-wing conspiracy and said he would beat the charges.

“For three years, they’ve gone after us politically — an unprecedented hunting expedition, with one goal — to depose the right-wing government led by me,” the prime minister said. “The primary goal is to influence the elections, even when they know this house of cards will completely collapse after the elections.”

But wait — Netanyahu is facing criminal charges. Will he have to step down?

Nope. There’s no law that forces a sitting prime minister to resign if indicted. Plenty of people — including Netanyahu’s opponents — have said that he should resign for the good of the country. They say a sitting prime minister can’t be tied up in court while he has to run the country. But Netanyahu is standing his ground, and legally, it looks like he’s within his rights. A final hearing, probably after the election, will determine whether the charges go forward.

Has this ever happened before?

Yes and no. Netanyahu is the first prime minister to be indicted for corruption — but that’s only because previous prime ministers have resigned before the process got this far. In 2008, Ehud Olmert resigned amid allegations of bribery, even before police recommended that he be indicted. Olmert eventually was convicted and served time in prison.

And in 1977, Yitzhak Rabin resigned after it became public that he and his wife held illegal foreign bank accounts totaling $10,000. Rabin ran again 15 years later and won. He would sign a historic peace treaty with the Palestinians but two years later be assassinated by a Jewish extremist.

Netanyahu, though, hasn’t backed down, staying in office even after police recommended that he be indicted, and after the indictment came through. That’s never happened before; we’re in uncharted waters now.

What does this mean for the election?

Unclear. Netanyahu is in a tight race with a new centrist party called Blue and White (the colors of Israel’s flag), which has a narrow lead in the polls. And a poll by The Times of Israel published Thursday says the indictment could hurt Netanyahu at the polls, moving some right-wing voters over to his rival.

But here’s where it gets complicated: Even if Netanyahu wins fewer votes in the election on April 9, he could still win the election. Israel has a parliamentary government, so what matters is which party can get a majority in the Knesset, Israel’s parliament, to back them. So even if Netanyahu finishes second, he will stay as prime minister if there is a right-wing majority overall — and it’s willing to back him.

So Netanyahu could still serve another term, even under indictment?