This Israeli town will be fully accessible to people with disabilities 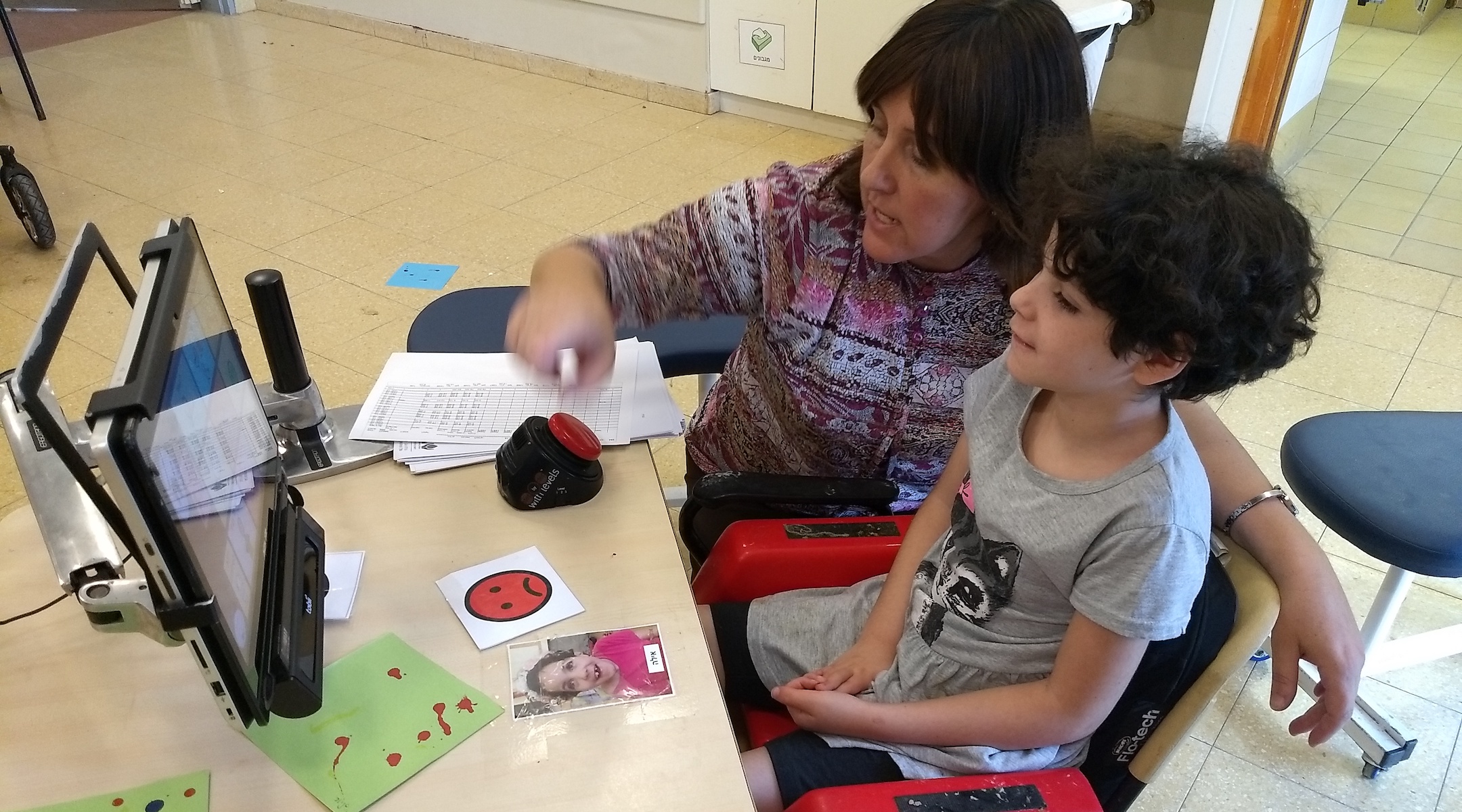 Ayala, 11, a student with a cognitive disability, communicates via a computer screen with her teacher, Rivka Dimant, in a school at Aleh Negev, a campus for Israelis with disabilities, Oct. 25, 2018. (Ben Sales)
Advertisement

OFAKIM, Israel (JTA) — Ayala’s eyes darted around the screen, choosing words and pictures as her teacher asked her rapid-fire questions.

Ayala, 11, has a cognitive disability that prevents her from speaking. But she can communicate thanks to a screen that reads her eye movements and transmits answers to questions.

“Do you want to go to the bathroom? Say yes or no,” the teacher, Rivka Dimant says as Ayala’s eyes focused on the word “no.”

“No? Do you want to show them your family? Yes. Who is that? Mom and dad! Where’s the wonderful Ayala? Show us. There she is!”

At many schools in Israel, Ayala would be an outlier. Here she’s one of more than 100 students in a school dedicated to special education, in a place designed for people with disabilities. Aleh Negev-Nahalat Eran, where the school is located, is the only campus created for Israelis with severe disabilities.

Aleh Negev is already inclusive in the way it seeks to connect outpatients who come to the campus for rehabilitation and residents with severe disabilities who live there. And it’s about to take that concept to the next level: In October, Aleh Negev received a government grant to build an adjacent town that will be fully accessible to people with disabilities, where they will live and work alongside non-disabled people.

“This village is not an institution; this is a social community center,” said Doron Almog, a retired Israeli general who chairs Aleh Negev, referring to the existing campus. “It’s a breakthrough integration concept for the most severely disabled children and people on earth. This is the supreme test of humanity.”

The planned town next door, called Daniel, will place disability inclusion at its center. It will be built both for professionals working at Aleh Negev — there is a staff of 340 — as well as people with disabilities who use its services and others. And it will stand in stark contrast to cities across the country that sometimes make little accommodation for disability — from sidewalks without ramps to bomb shelters that cannot fit a wheelchair.

In Daniel, which is slated to complete construction in 2024, entrances will be wider, sidewalks will have ramps, and homes will have lower counters and sinks. Its 500 housing units also will include adjustable furnishings — like tables with wings that can go over the lap of a person using a wheelchair or, to give a Jewish example, a Torah ark with shelves that can slide outward, enabling easier access to the scrolls.

“In order to attract good people — doctors, nurses, physicians, administrators — you need to create a community,” Almog said. “People will not come if they don’t feel [a sense of] belonging to something which respects itself.”

Israel as a whole is beginning to embrace including people with disabilities in all facets of life, according to Avital Sandler-Loeff, director of Israel Unlimited, an Israeli disability inclusion project from the American Jewish Joint Distribution Committee. Her organization is piloting a program in which 300 people with disabilities have moved into their own accessible apartments in 37 towns throughout the country. They receive support from a facilitator at their home, as well as help finding a job and becoming acclimated to the community.

In addition to creating a better environment for the people it serves, the program is cost-effective, Sandler-Loeff said. If people live and work in a community, institutions no longer bear the cost of supporting them.

“Independent living means you get the support you need in order to live the life you want to live,” she said. “Once someone is included in the community, he needs less support. If he works, he doesn’t need care during the day. If he makes friends, you don’t need to pay for a special club.”

Aleh Negev aims to serve as a foundation for disability inclusion in Daniel, the planned town. Its 25-acre campus in the Negev Desert is home to 145 residents with severe disabilities, and provides rehabilitation care annually to an additional 4,500 outpatients. The grounds include a therapeutic swimming pool, horse stables, an accessible outdoor amphitheater and a petting zoo. There also are dental and medical facilities for locals with disabilities who have no other place nearby to access care.

It’s one of four branches of Aleh, a network for Israeli children with severe disabilities, and the only one that’s a standalone campus. Aleh Negev receives funding from the Israeli government and the Jewish National Fund.

Its construction, beginning in 2003, was spearheaded by Almog, the former head of the Israeli army’s Southern Command. His son, Eran, had severe autism and developmental disabilities, and died at age 23 in 2007. Almog became involved in Aleh when he found that facilities for people with disabilities in Israel were depressing and disrespectful to their patients.

“This son, who has never said one word, from his deafening silence told me, ‘My dear father, you are all fake,’” Almog told the Jewish Telegraphic Agency, describing what inspired him to invest himself in Aleh.

He imagined his son telling him: “You say all of Israel is responsible for one for another, but you don’t mean it. Not for me, not for the weakest and the purest.”

Residents, outpatients and others at Aleh Negev interact incidentally throughout the day and assemble for concerts, carnivals and other events. In addition, there’s a preschool for non-disabled kids on the campus whose students interact with their disabled peers.

Aleh Negev spokeswoman Ravit Raz said parents were hesitant to enroll their non-disabled kids in the preschool because they feared kids with disabilities. But after the parents saw the benefit of inclusion, the classroom quickly filled up.

“In the beginning, parents didn’t like it at all,” she said, recalling that they told her, “‘How dare you suggest that my kid learn in an institution with kids with special needs?’ Now, the day after enrollment, the class is full.”