For Israelis abroad, elections start with a scramble for flight tickets

AMSTERDAM (JTA) — Like many voters in democratic national elections, I almost always hope that whoever is elected will be able to serve out their full term — even if they weren’t my pick.

This is especially true in my native Israel, whose infamously brittle coalitions last on average only 2 1/2 years. Early elections there cost billions in polarizing campaigns and present a governance challenge that I see as far more worrisome than having the country run by someone who isn’t my cup of tea.

But if I’m honest, my desire for political stability in Israel is tainted by selfishness: I’m one of thousands of Israelis living abroad who, in every election, must fly home on short notice with high costs because our country won’t let us vote anywhere else.

In other words, I really wouldn’t mind limiting this ordeal to once every four years.

Just as our desire to vote reflects an undying attachment to the country that many of us perceive as an insurance policy, Israel’s lack of absentee voting reflects a country’s hang-ups about citizens who leave its borders and the Zionist ethos of Israel’s founders.

The late Israeli prime minister Yitzhak Rabin famously called leavers “wimpy debris” as late as 1976. The word for leaving Israel in Hebrew is “yerida” – descending — as opposed to “aliyah” – ascending.

Whereas the United States, France, the Netherlands and many other democracies actively encourage expats to participate in elections – expats even have their own constituencies and representatives in the French parliament’s lower house – Israel bars its about half a million citizens living elsewhere from voting abroad.

The only ones eligible to vote oversees in Israeli elections are several thousand government envoys.

According to the International Institute for Democracy and Electoral Assistance, about 60 percent of the world’s 193 countries allow their citizens to vote abroad. Globalization is only helping to increase this trend, with Belgium, Sweden, Mexico and Panama joining the list in the previous decade. India did so this year.

Netanyahu’s is one of several Israeli governments that have tried to promote voting abroad, but a 2015 bill on the matter failed. (Opponents of the idea include Arab lawmakers and many on the left and right of center.)

In Israel, “the first reaction to any political statement by an expat is often not to debate the expat’s argument, but their right to even express an opinion,” said Eldad Beck, an Israeli journalist based in Berlin. “This mentality needs to go, whether the prime minister stays or not.”

Why, then, are we prepared to travel thousands of miles to vote in Israel, where we haven’t lived in years? And why do some of us do this, then lazily opt out of voting in the countries where we do make our homes?

Maximillian Marco Katz, an Israeli citizen and activist against anti-Semitism in his native Romania, said he wouldn’t make a special trip to vote there, although he will for Israel.

“The truth is, in Romania I was told too often that I don’t belong, even though I grew up here,” Katz said. “I served in Israel, I fought in Israel. My children are there. I’m a Zionist above all and it’s my home, so of course I will vote.”

The relatively dramatic nature of just about any Israeli election — it’s often a close race with serious security implications — certainly helps attract the devotion of some expat voters.

Merav Shtifman, an Israeli businessman from Amsterdam, will travel to Israel for two days just to vote. She cited her belief that Prime Minister Benjamin Netanyahu, who is implicated in several alleged corruption scandals, is a danger to Israeli society.

“There is no alternative to replacing this ruler,” wrote Shtifman, who will vote for Blue and White, the newly formed center-left party led by Benny Gantz and Yair Lapid, which is neck and neck with Netanyahu’s Likud in the polls. “I don’t think he cares about what’s good for the country, only about his personal survivability [in power.]”

Katz, by contrast, says the allegations against Netanyahu have a minor influence on his decision making, though he has not decided whether to vote for him or for Blue and White.

“I live in a country with many corruption scandals,” he said. “I’ve learned to disregard them until a court hands down a verdict. There’s too much risk for manipulation otherwise.” 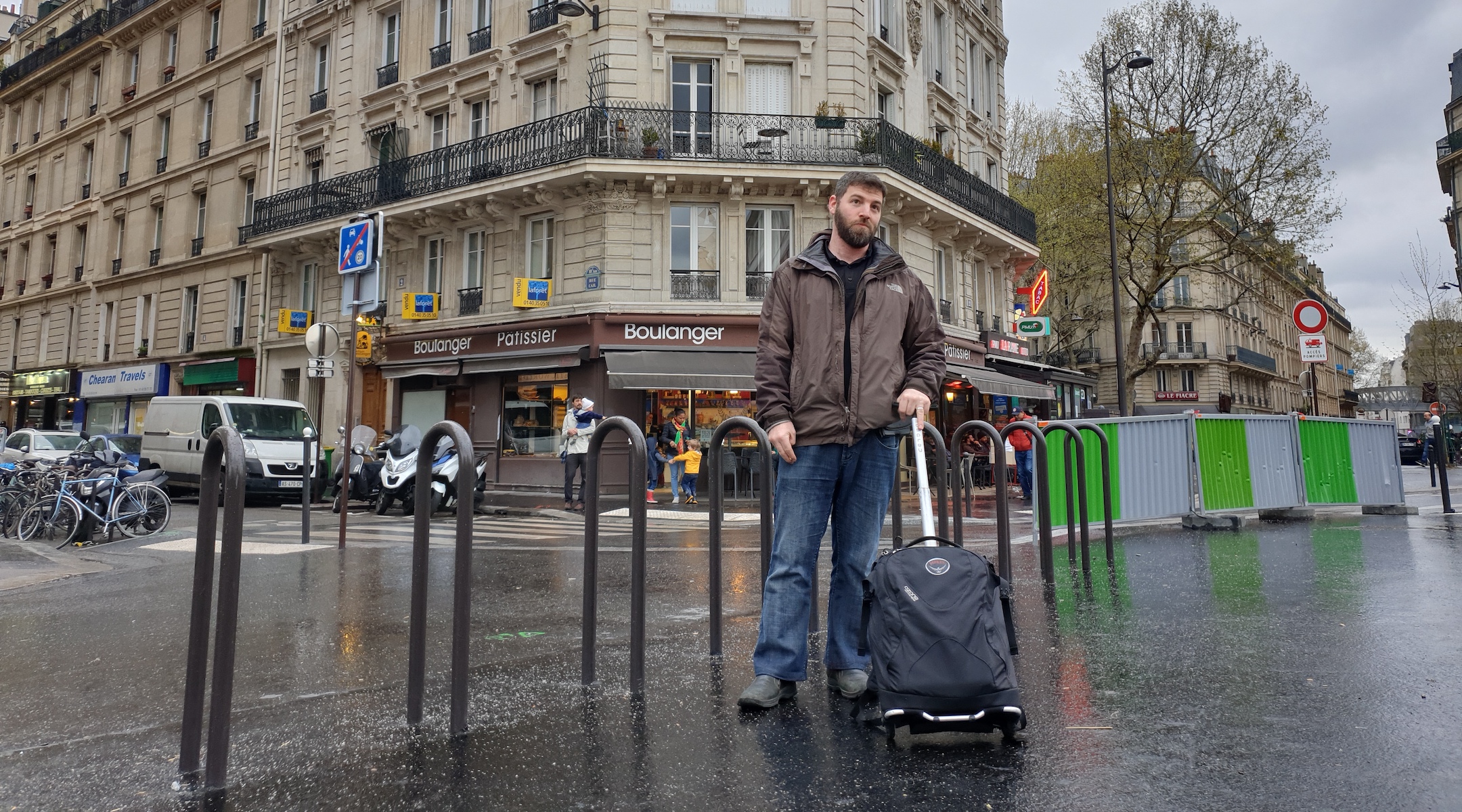 JTA’s Cnaan Liphshiz, a Netherlands resident shown in Paris, is one of many native Israeli citizens abroad forced to travel to the Jewish state to vote in elections. (Courtesy of Liphshiz)

Torn and undecided about whom to vote for, Katz says Netanyahu has “elevated Israel to new heights in terms of its international status, economy and security, but neglected vital internal issues like health, socioeconomic gaps and education.”

Meital Davidsen, a repeat expat voter from Denmark, will vote Labour not necessarily against Netanyahu, she said, but for its “great legislative work, which corresponds with my values.” Like Katz, Davidsen has decided to suspend her verdict on the allegations facing Netanyahu until a court delivers its own.

“It’s only fair to give him the right to fight for his name and not be the judge and jury,” Davidsen, a mother of one, wrote of Netanyahu in a private Facebook message to the Jewish Telegraphic Agency. “Though I never believed in his agenda nor agreed with his way of managing the country, I don’t think he is a traitor as others claims. But he lost his way a long time ago.”

Beck will fly in to vote for Netanyahu.

“The left has not internalized the lessons of its failed policy of concessions” to the Palestinians, he said. “That makes it dangerous. And Netanyahu and his Cabinet have brought Israel to unprecedented achievements in security and diplomacy. I’m voting to protect it.”

Netanyahu’s legal woes and unpopularity in the media only strengthen Beck’s feeling that “Israel’s democracy is under attack” by people, including in the justice system, determined to oust Netanyahu.

Beck is less nonchalant than many other Israeli expats about voting in Europe.

“I basically make a point of participating in every election where I am eligible to vote,” said Beck, a dual citizen of Austria and Israel. “The difference is, Austria makes an effort to allow me to vote wherever I am. Israel does not.” (Austria allows voting by mail. The Netherlands even allows citizens to empower others to vote for them.)

This time around, I booked my ticket from Amsterdam, where I’ve been living since 2010, days after the early elections were set for April 9. I’ve learned that even off season, waiting any longer means forfeiting all hope of finding a direct flight and submitting myself to exorbitant prices for a connection — thanks to other Israelis flying from Amsterdam to Tel Aviv close to the elections.

One of them is my own father, Israel Lifshitz. When elections come around, we often travel together. Sometimes we vote for the same party, other times we don’t and sometimes, ridiculously, we travel to effectively cancel each other’s vote by picking opposing candidates.

Looking up our designated ballots in Israel, I remembered with a pang of guilt sitting out the 2017 Dutch elections. I had the voting slip ready and then went gardening or something and simply forgot all about it.

As for my dad, who is also a Dutch citizen, well, he chivalrously donates his vote in the the Dutch elections to his wife — she tells him who to vote for.  (“We’re both lefties, so whatever,” as he explains it.)

To my father, the stakes are compellingly higher in Israel because of threats to its security. Yet this time around, security played a marginal role in his electoral choice, I reminded him.

“You’re right,” he said. “I guess it’s all about an emotional attachment that I have over there, but not here.” The son of Polish Holocaust survivors, he also regards Israel as a contingency, he said.

As for me, my attachment to Israel is simple: Rising anti-Semitism and xenophobia here and throughout Europe give me little reason to believe that our two small children, whom my wife and I are raising as pro-Israel, pro-American Jews, will feel at home in the Netherlands when they come of age in about 20 years. This belief informs the importance I attach to voting in Israel, a country they might someday call home.