Netanyahu has been unbeatable – retired general Benny Gantz could change that 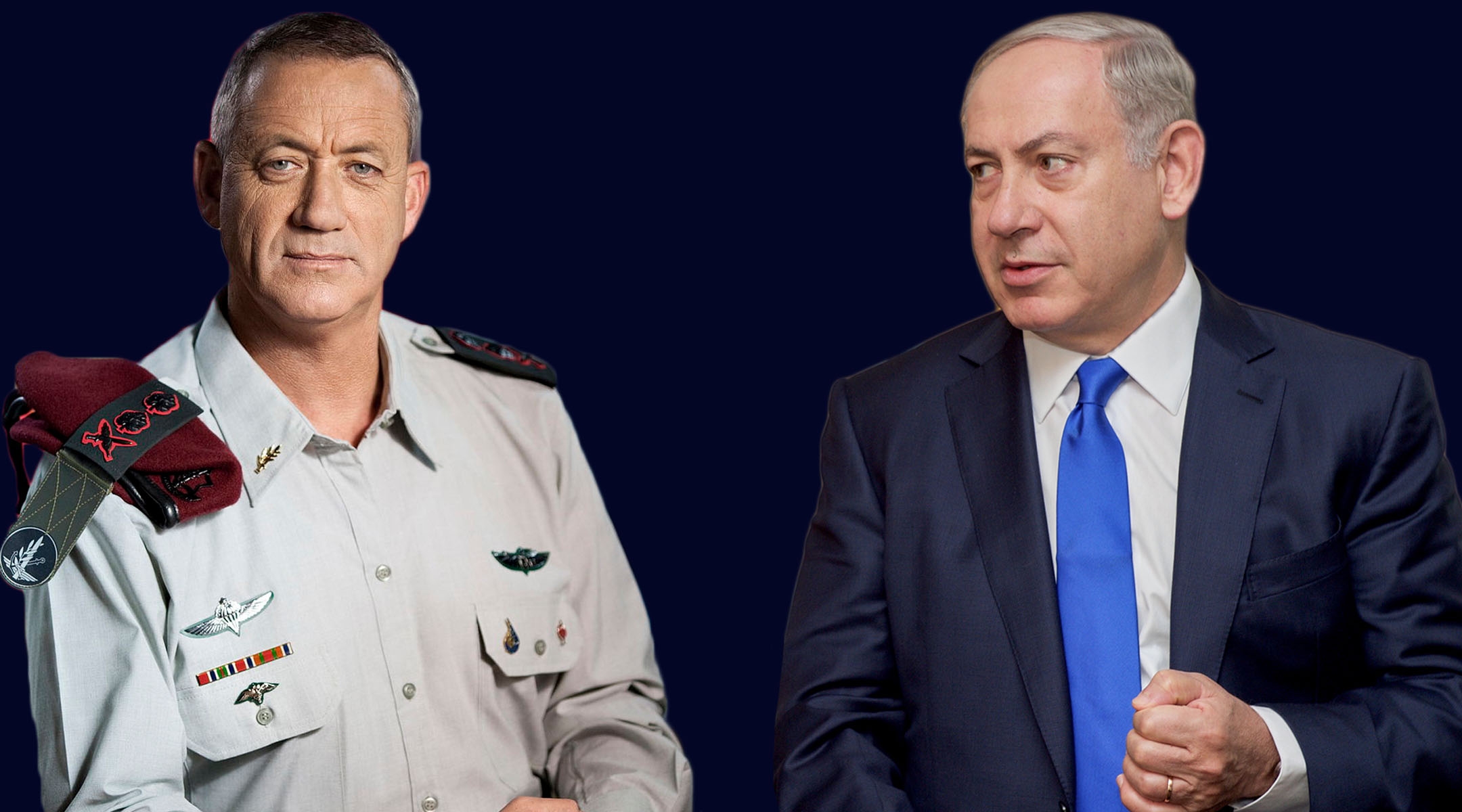 TEL AVIV (JTA) – In just over 20 minutes, Benny Gantz cemented himself as the most likely candidate to defeat Prime Minister Benjamin Netanyahu in the upcoming Israeli elections.

“I thank Netanyahu for his 10 years as prime minister. We’ll take it from here,” Gantz declared in front of hundreds of supporters and journalists here on Tuesday night.

In the hours after his speech, Gantz’s popularity skyrocketed: A poll by Hadashot 13 found Netanyahu and Gantz tied, at 42 percent each, for most preferred prime minister and that his newly formed Israel Resilience party would pick up 24 seats, more than double recent estimates and just six seats behind Netanyahu’s Likud party. 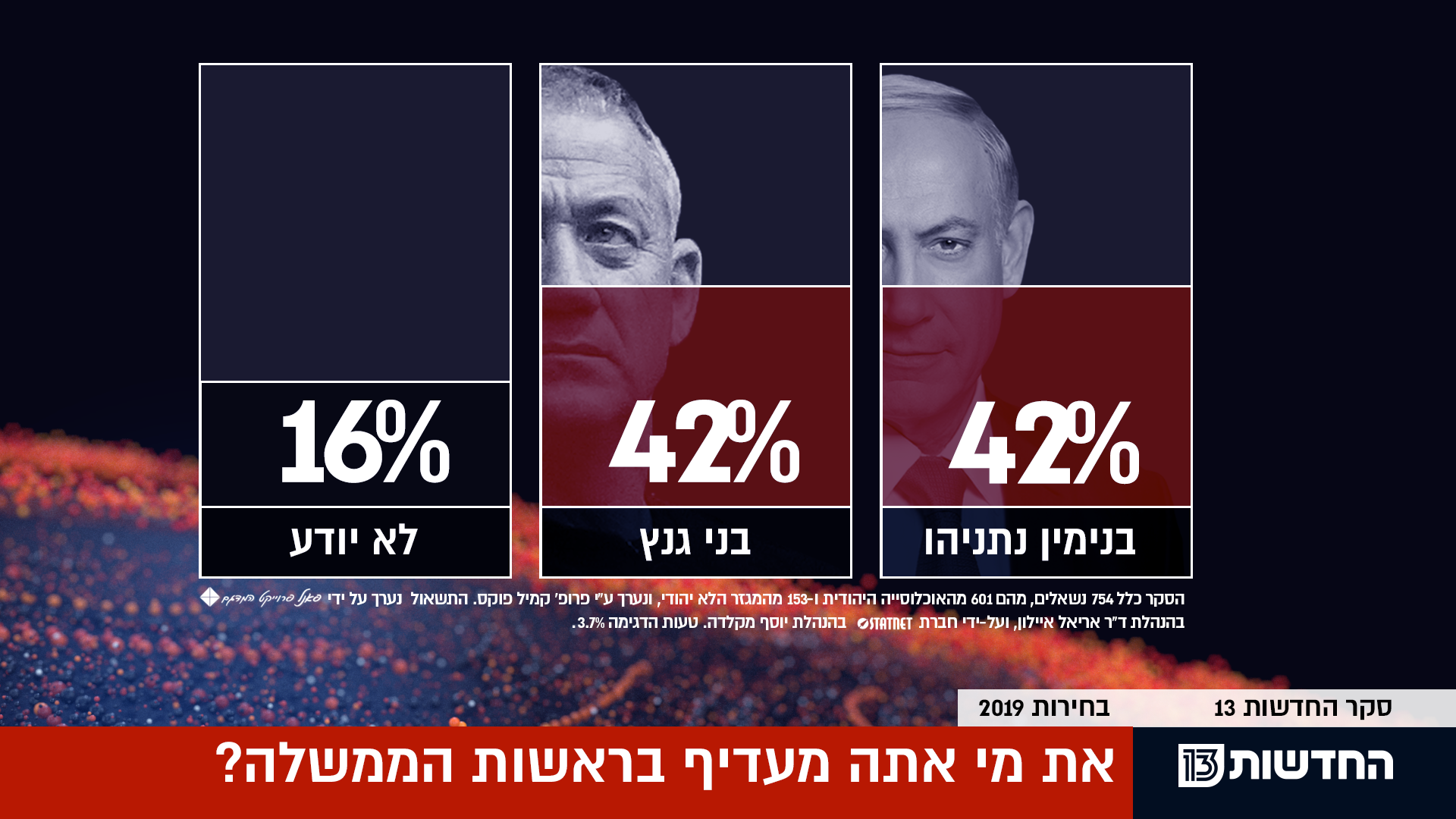 In a Jan. 30 poll conducted by Hadashot 13, Prime Minister Benjamin Netanyahu, right, and challenger Benny Gantz tied for most popular choice for next prime minister. (Screenshot from Hadashot 13)

Gantz drew praise from large parts of the Israeli media. Political commentators including Reshet’s Barak Raviv and Hadashot’s Amnon Abramovitch compared him to Prime Minister Yitzhak Rabin. Haaretz editor-in-chief Aluf Benn wrote that “for the first time in a decade, the opposition has someone with authority and military experience, and Gantz’s speech showed he can lead the anti-Netanyahu camp.”

In addition to the spike in the polls, the best indication that Gantz’s speech struck a nerve was the Likud’s panicked response. Ministers Gilad Erdan and Miri Regev struggled to present talking points they were handed earlier that day on primetime news. They both tried to paint Gantz and his new partner, the one-time chief of staff and defense minister Moshe “Bogie” Yaalon, as leftists in center-right clothing, but their arguments came off as desperate and incoherent. Regev embarrassingly waved a paper with talking points she had written down.

We’ve known for months that Gantz would enter Israeli politics, but his electoral potential remained uncertain – until now. After his blockbuster speech, in which he revealed his political views for the first time, Gantz made clear that he poses a credible threat to Netanyahu, a feat no candidate has achieved in the past decade.

Netanyahu and his party had hoped that Gantz would present a leftist agenda. The majority of the Israeli public identifies as either center or right, and a challenge from the left would be much easier for Likud to dismiss. But the center is precisely where Gantz is positioning himself.

Gantz placed a special focus on security, calling out Israel’s enemies by name: President Rouhani in Iran, Hezbollah leader Nasrallah in Lebanon and Hamas leader Yahya Sinwar in Gaza, warning Sinwar, “I suggest you not test me again,” referring to the blow delivered by the Israeli army to Hamas during the 2014 Gaza war while Gantz was chief of staff. Gantz criticized the Netanyahu government for its Gaza policy in particular, especially for allowing $15 million payments from Qatar into Gaza in suitcases to fund Hamas salaries.

At the same time, Gantz promised his government will “strive for peace” and “not miss an opportunity to bring about regional change,” giving credit to prime ministers Begin, Rabin and even Netanyahu, labeling each of them “patriots.”

By the looks of things, Gantz will do his best to avoid specifics on the Palestinian issue, which only got a brief mention in his opening speech. From the little he said, we can surmise that Gantz will advance gradual separation from the Palestinians rather than annexation of the West Bank. He promised to bolster all the settlement blocs and that Jerusalem would remain Israel’s undivided eternal capital, and assured listeners that Israel’s eastern security border will remain the Jordan Valley.

Of course, none of this stopped Netanyahu from tweeting that Gantz is a “weak left[ist].”

But more than anything, Gantz called for national unity among Israelis.

“The struggle between left and right rips us apart,” he declared, referring to the growing divide in Israel, an issue that is particularly important to Israelis today. The 2018 Israel Democracy Institute Index found that for the first time in 16 years, Jewish Israelis view the friction between the right and the left as the No. 1 tension within Israeli society – above that between Jews and Arabs.

Gantz’s criticism of Netanyahu focused on the incumbent’s legal issues. He noted that no prime minister should serve under indictment, referring to Attorney General Avichai Mandelblit’s expected recommendation to indict the prime minister for corruption before April’s election, and lambasted Netanyahu’s public showcasing of covert military operations for political gain. Gantz also criticized Netanyahu’s divisive targeting of Israel’s leftists and minorities, referring to the Nation-State Law and Netanyahu’s infamous fabricated 2015 story that the left was sponsoring buses sending “droves” of Israeli Arabs to the polls.

Gantz addressed nearly every issue in the public discourse: security fears on the northern front near the Syrian border, Gaza, the Israel Defense Forces, treatment of Israel’s minorities, the increasing divide between the right and left, the relationship between religion and state, LGBT rights, public corruption and the importance of pursuing peace with the Palestinians.

Though the official campaign period is 90 days, campaigns only start to heat up about 45 days before the April 9 election, when the party lists are confirmed. Nonetheless, after Tuesday night, it appears that Netanyahu will face a formidable challenger with a strong security background.

To win this election, Gantz must take more seats than the prime minister’s Likud, which controls 30 seats. To do this, Gantz will need to convince other prominent politicians to merge into his party.

Hours before the event, Gantz reached an agreement to join forces with Yaalon, welcoming him to the stage near the end of his remarks. Yaalon resigned as defense minister in May 2016 in response to political pressure for defending the decision to prosecute Elor Azaria, a soldier that executed an incapacitated Palestinian assailant in Hebron. Yaalon remains widely respected in Israeli society and cements Gantz and Resilience for Israel, or Hosen LeYisrael, as a center-right party with a strong security portfolio.

It’s unlikely that the rest of Gantz’s coalition will be built from members of opposition parties, such as Labor head Avi Gabbay or Hatnuah’s Tzipi Livni, two of Netanyahu’s most outspoken critics. Neither are doing well in the polls, and being branded as a leftist would be nothing short of a death knell for Gantz.

No matter who Gantz chooses to join him, the road ahead is a long one. But if Gantz can reproduce more moments like his Tuesday night speech, and if Israelis can’t keep his catchy jingle out of their heads, then he just might be able to pull this off.

Eli Kowaz
Eli Kowaz is a political analyst based in Tel Aviv and communications director at Israel Policy Forum.
The views and opinions expressed in this article are those of the author and do not necessarily reflect the views of JTA or its parent company, 70 Faces Media.