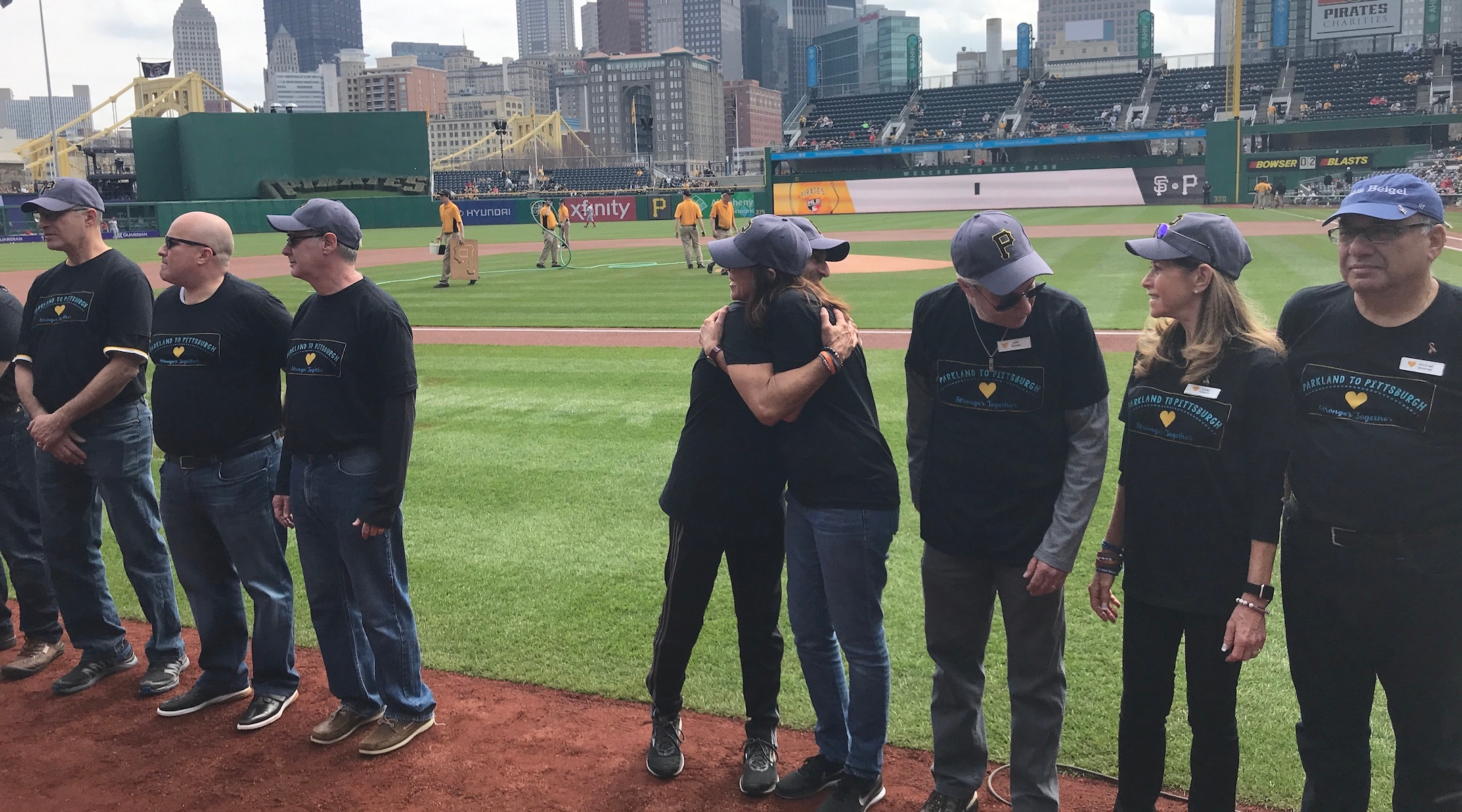 People with connections to the victims of the Pittsburgh synagogue and Parkland school shootings were honored at PNC Park in Pittsburgh before a game, April 6, 2019. (Mike Elk)
Advertisement

PITTSBURGH (JTA) — For many in this city’s Jewish community, after suffering through a long winter following the Tree of Life synagogue massacre in October that killed 11 worshippers, the return of the professional baseball season has been a welcome mental health relief.

Before last Saturday’s game between the hometown Pirates and the Cincinnati Reds, some of those affected by the shooting were honored on the field and cheered by tens of thousands of Pittsburghers in attendance.

“It’s kinda like a bucket list [item], coming on the field,” Sam Wedner, 62, said on the bright spring day from the PNC Park field. “Unfortunately I had to get here the way I did — with my wife being injured and my mother-in-law Rose Mallinger being killed. But for this minute it’s a bucket list item.”

The Pittsburgh delegation was joined on the field by others who are now helping them heal: Those affected by the shooting at Marjory Stoneman Douglas High School in Parkland, Florida, in February 2018.

The ceremony was part of a series of events designed to help bring together those from the Jewish community in Pittsburgh and a delegation from Parkland, not all Jewish, to learn from one another. For Wedner, the visit of the Parkland delegation has helped him overcome his grief from the loss of his mother-in-law.

“Their efforts to work with the legislature have been inspiring and beyond whatever I consider that I could do,” said Wedner, referring to Parkland activists who have pushed their local government to pass gun reform legislation. “They have inspired me, they have given a better attitude on how to approach the tragedy going forward.”

Throughout last weekend, the Jewish Community Center of Greater Pittsburgh organized a number of events, both fun and educational, to help the two groups of survivors learn from each other as they struggle with their pain.

On Sunday afternoon at the JCC in the Squirrel Hill neighborhood (one of three locations under the greater Pittsburgh umbrella), just blocks from the Tree of Life, Parkland and Pittsburgh teens gathered in the auditorium to hear a DJ play hip-hop and munch on kosher pizza. It was part of a special version of J-Serve, an annual day of service for Jewish teens set up by BBYO, Repair the World, the Charles and Lynn Schusterman Foundation and others.

J-Serve has focused traditionally on getting thousands of young Jewish teens from cities across the country involved in community service. This year, after the Tree of Life shooting, the Pittsburgh JCC decided to add political advocacy engagement to the mix, training local teens on issues of gun control and immigration reform.

The move comes as a result of what J-Serve organizers in Pittsburgh see as an increased political awareness among high school students, particularly in the wake of the high-profile gun control protests inspired by Parkland teens last year.

“I think the teens in our community, many of them are really aware of what’s going on in the world around them, they are very passionate about the issues that they care about and they are really motivated to make change now,” said Hannah Kalson, the Pittsburgh JCC’s director of teen and youth engagement. “They don’t want to wait until they’re older, they want to take action now, and they are organizing themselves.” 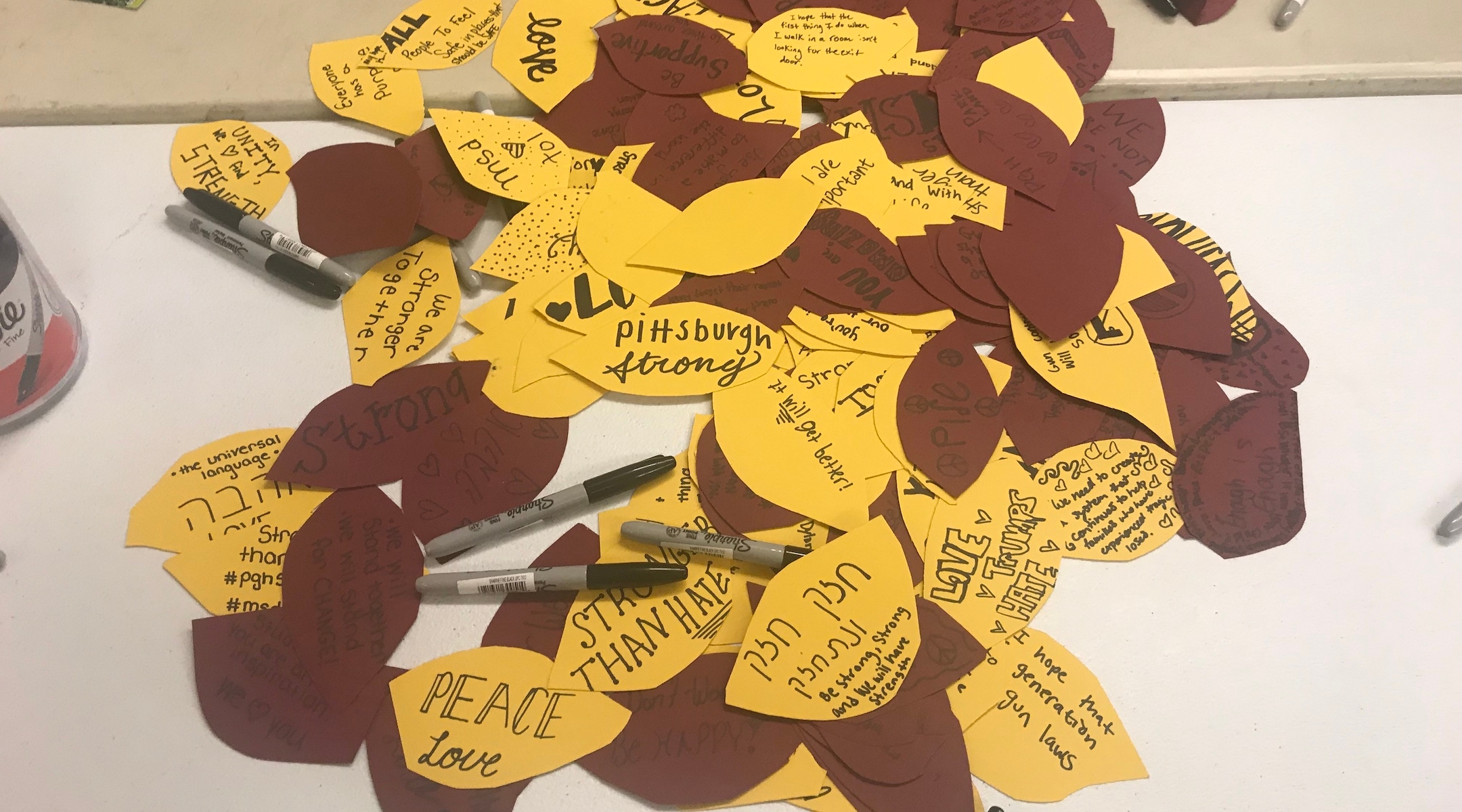 Teens affected by the shootings at the Tree of Life synagogue and Marjory Stoneman Douglas High School in Parkland, Fla., made leaves together to symbolize their togetherness. Yellow represented Pittsburgh and burgundy represented Parkland. (Mike Elk)

In one JCC room on Sunday, teenagers from both communities sat and talked as they drew on yellow leaves and burgundy leaves — the former for Pittsburgh’s black and gold and the latter for Parkland’s school colors — to symbolize the interconnectedness of the tragedies that unfolded in their neighborhoods.

In a tense emotional session later in the day, the high schoolers shared strategies about how to talk about politics with those whom they disagree with, especially when they find themselves becoming emotional. One Parkland teen talked about how the school’s students kept their cool while lobbying lawmakers — like memorizing talking points and role playing.

The lessons from the Parkland teens helped comfort several distraught-looking counterparts in the room.

“It hasn’t been an easy time, and the process of responding to that is ongoing,” Kalson said of the teenagers, many of whom knew people murdered in the Tree of Life shooting and lived in fear afterward that their synagogues might be attacked.

“It’s only been a few months. So we are still in that space, which is one of the reasons that connecting with Parkland is so powerful because they are a little ahead of us on that road. They’re holding out their hands and pulling us along,” she said.

Some of the Pittsburgh students said meeting with the Parkland students was a transformative experience.

“It’s really amazing that we can pull together and connect, and share stories and feelings, because we understand what each other are going through,” one junior said at nearby Allderdice High School (the JCC did not want any of the teens’ names used). “Seeing how strong they are and everything they have done after that is really inspiring.”

As white supremacy continues to show up in the news and the possibility of more attacks looms, the Parkland students and Jewish residents in Squirrel Hill hope that they are building a model of how people can use tragedies to take collective action for political change.

“We are at different stages of grieving, but we will always be dealing with this, and it’s important for them to understand that we are all in this together and to continue supporting one another,” said Lizzie Eaton, a senior at Marjory Stoneman Douglas.

The increased political advocacy seems to have paid dividends already in Pittsburgh: On Tuesday, Mayor Bill Peduto signed into law landmark legislation that makes Pittsburgh the first city in the country with the legal authority to seize guns from individuals exhibiting “red flags” — that they may be willing to consider harm to themselves or others.

The National Rifle Association has already signaled that it intends to challenge the legislation, but pointing to Tree of Life survivor Dan Leger, Peduto said that he was inspired to take on the NRA by survivors like Leger speaking out.

For local Jews, it felt like a moment of healing.