From 1600s Europe to a lesbian feminist seder, these 4 Haggadahs are a trip through Jewish history 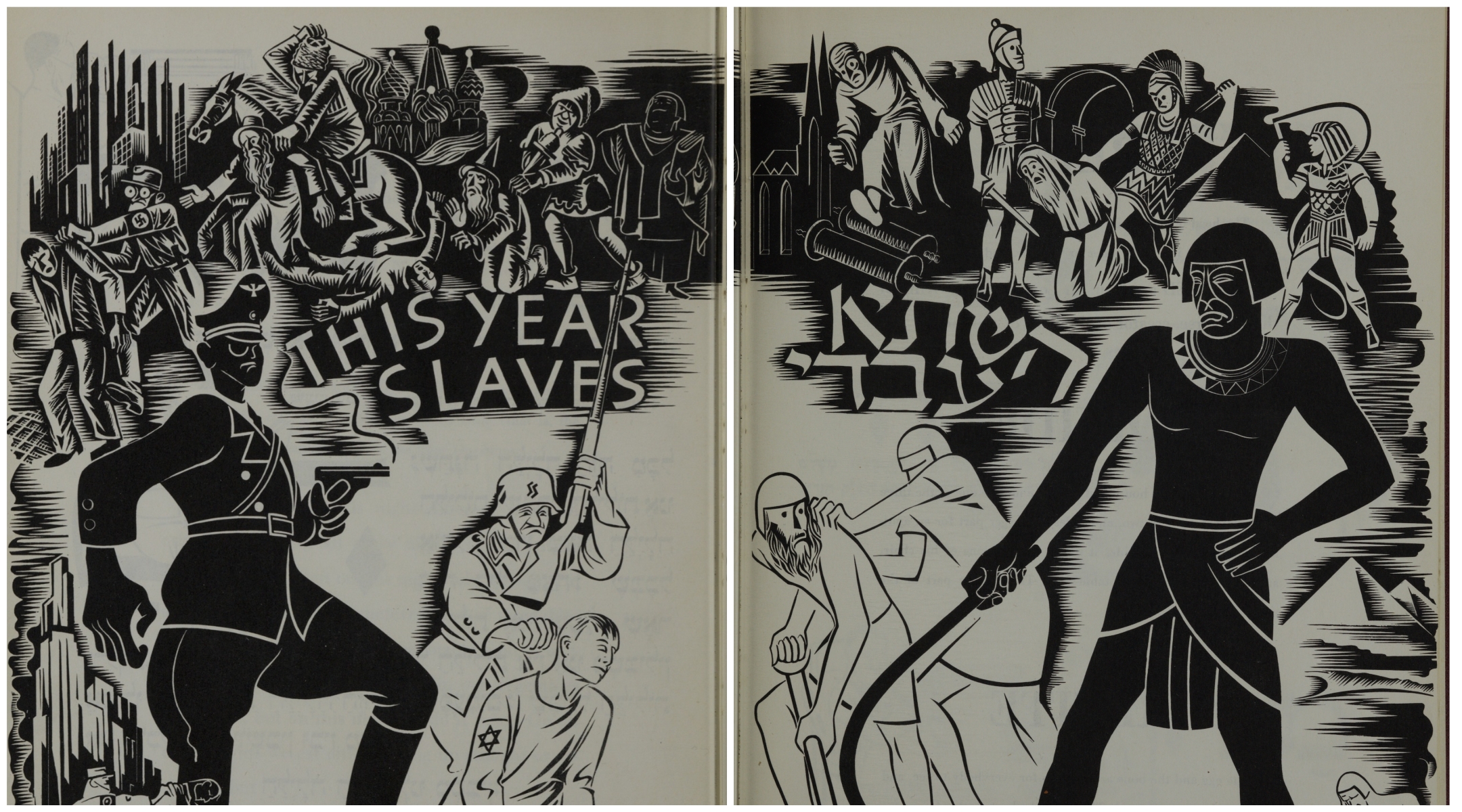 A children's Haggadah from 1945 compares draws parallels between the Passover narrative and the Holocaust. (Yeshiva University Museum/Center for Jewish History)
Advertisement

NEW YORK (JTA) — From graphic novel Haggadahs to a Donald Trump-themed one, if you’re looking for a certain kind of guide to the Passover seder, chances are it’s out there. Recent years have seen a proliferation of political, environmental, family-friendly,  or just plain irreverent Haggadahs, but the urge to make Passover speak to contemporary times isn’t a new one.

The Jewish Telegraphic Agency took a look at four unique Haggadahs, from as early as 1687 to as late as 1990, each of which reflects in some ways the zeitgeist of its time. The seder texts, all housed at the Center for Jewish History in New York, feature production techniques popular at the time and touch on relevant topics ranging from the Holocaust to the LGBTQ rights movement.

The fact that the Passover seder usually takes place at home creates a market for Haggadahs tailored to each family’s needs or interests. In contrast, prayer books are often standardized by denominations or geographic location, said Jacob Wisse, the director of the Yeshiva University Museum at the Center for Jewish History.

“The intimacy of the context — in other words that this is a celebration that we carry on usually in the home, not in the synagogue: That might lend itself to a kind of broader, richer degree of visual adaptation,” Wisse said. “Communities really are charged with — they’re not [merely] allowed to — really seeing themselves in the context of this text.”

Here are four Haggadahs that show just that. 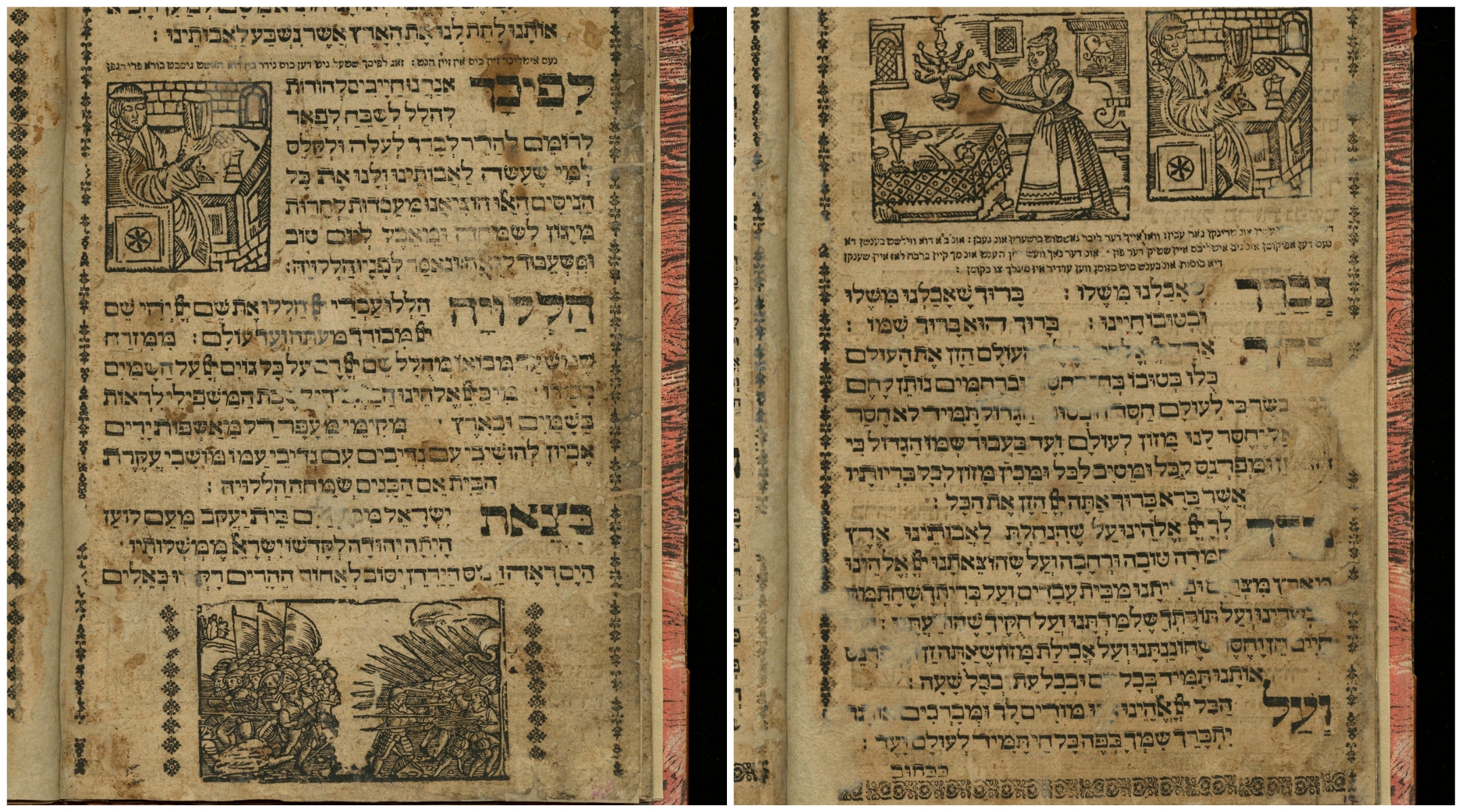 This Haggadah was created in 1687 by the renowned Cohen family, who at one time were the exclusive Hebrew printers in Bohemia, in what is now the Czech Republic. At that time, woodcutting, a printing technique using carved wooden blocks, was a popular technique for Haggadahs. Black-and-white images show rich details and the space alongside the text is decorated with flower-like symbols.

“We now take for granted of course how things are prominently illustrated and it’s the easiest thing to integrate imagery and text,” Wisse said. But the invention of modern printing “was fairly recent in terms of relative history, so a decorative Haggadah like this with woodcut borders on the title page and surrounding text on other pages with woodcut illustrations would’ve been experienced as a special thing to have.”

The Haggadah later belonged to the family of Rabbi Heinrich Lemle, a Frankfurt-based rabbi who in 1941 fled with his family to Rio de Janeiro. There Lemle went on to found a liberal Jewish community. The pages show wear and tear, Wisse noted, which points to the fact that it was actually put to use and not just displayed.

First published in 1945, “The Children’s Passover Haggadah” was designed by Siegmund Forst, a Jewish artist born and trained in Vienna. Forst fled to the United States in 1939 but he didn’t forget about the fate of Europe’s Jews. In this children’s Haggadah, Forst uses simple but powerful black-and-white illustrations to draw parallels between the Exodus narrative and more recent instances of anti-Semitic persecution, most notably the Holocaust.

“This was done as one of first attempts both to channel recent Holocaust history into the context of a decorated Haggadah but also to present this within the context of what’s known as a children’s Haggadah,” Wisse said.

A striking two-page spread, which reads “This year [we are] slaves” in English and Aramaic, shows Jews being whipped, beaten and shot by a range of perpetrators, starting with an Egyptian taskmaster and ending with Nazis. The comparison draws on the Passover commandment that each person should imagine him or herself as if he or she were a slave in Egypt, Wisse said.

“This idea of communicating to the younger generation is one of the key aspects of that, using recent history as a way of putting things in context about both what things have recently happened but also communicating the way that we participate in an ongoing tradition,” he said. 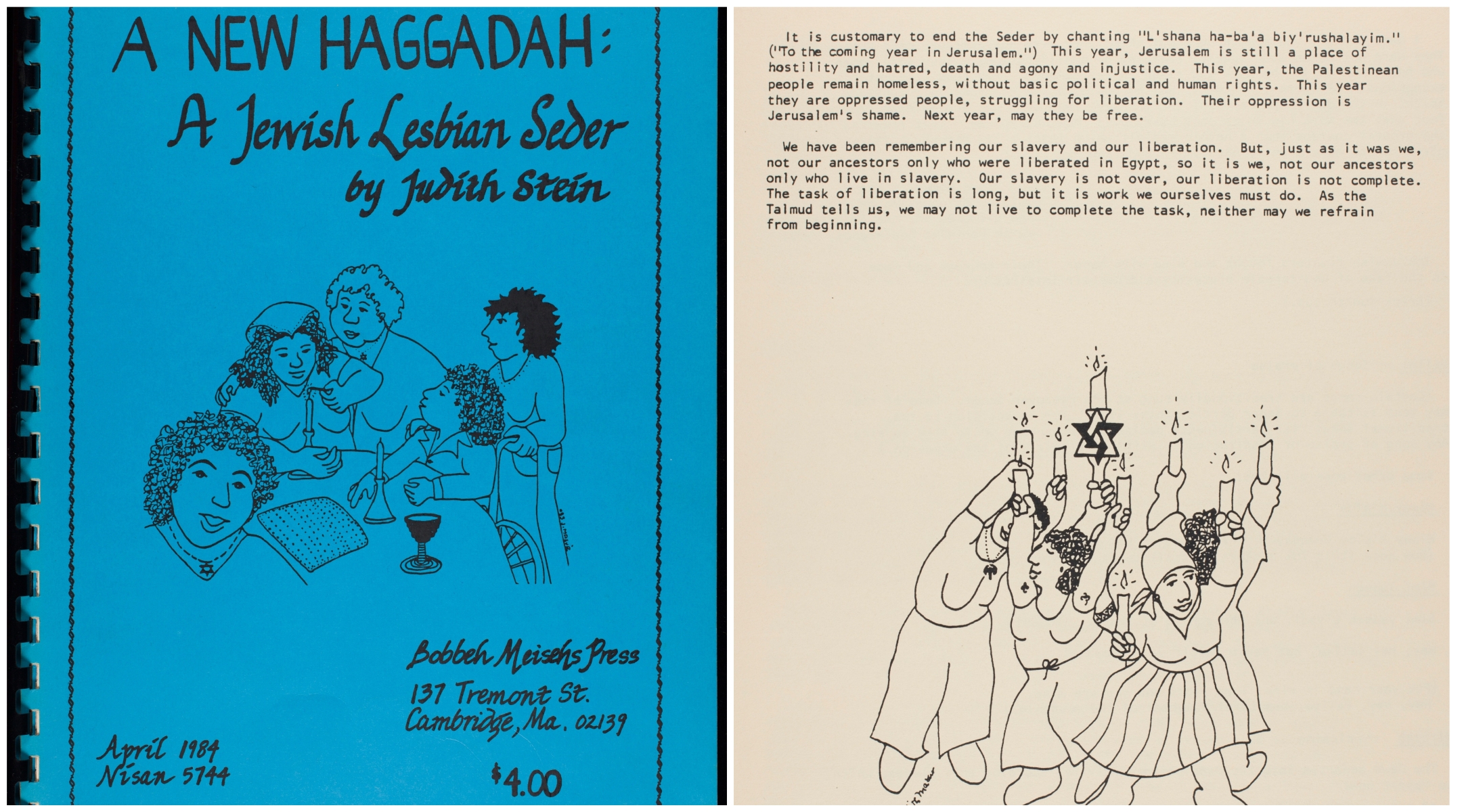 “A New Haggaadah: A Jewish Lesbian Seder,” part of a series of feminist seder booklets from the 1970s and ’80s, was published as the gay rights movement continued to gain steam but LGBTQ people still faced barriers in society, including in the Jewish community.

In the introduction, author Judith Stein greats readers with “Shalom Chaverot!” — using the female plural form of the Hebrew word for friends. Stein writes that she seeks a balance between preserving the traditional order of the seder and adapting it to values that fit her community, such as by getting rid of language she viewed as sexist and finding ways “to reflect Jewish lesbian culture positively.”

Stein saw it not only as a Haggadah for her and her friends but also as “a base for the evolution of Haggadot which fully incorporate Jewish lesbian sensibilities.”

“I think it’s interesting that here you have an especially personal reflection because it’s written by one person,” Wisse said, “but also again channeling with respect towards tradition but updating it within this new context.” 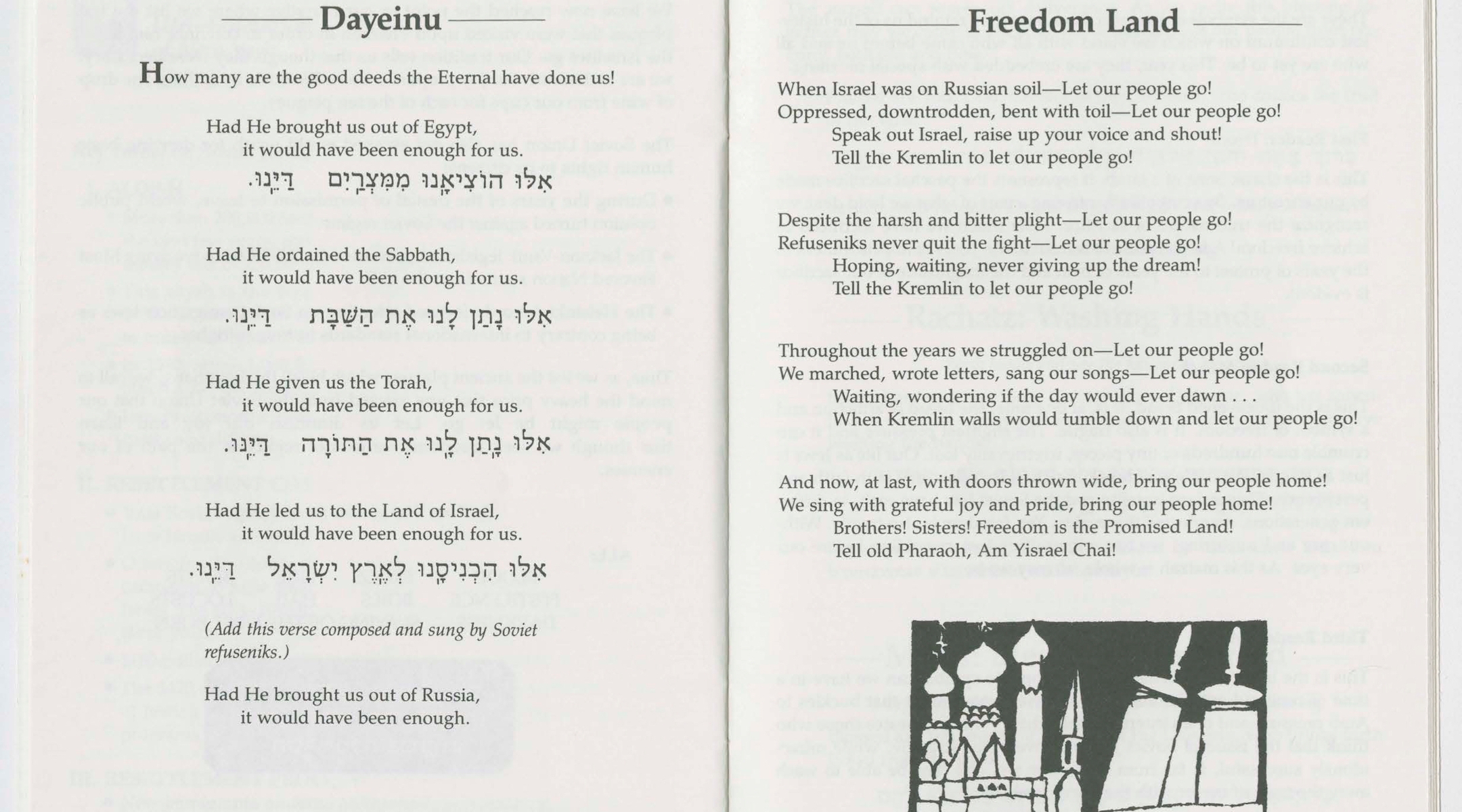 This seder guide was created  in 1990, when nearly 182,000 Soviet Jews left the country for Israel. For decades, Soviet Jews had been wanting to leave the USSR but faced various restrictions at home. The moment represented a win for activists, which is reflected in the triumphal tone of the Haggadah, titled “The Exodus Haggadah, From Tyranny to Freedom: A Celebration.”

“There is a really celebratory aspect of this Haggadah to integrate the joy of the modern miracle of free immigration of Soviet Jews within the beauty and context of the Passover Seder,” Wisse said.

But the Haggadah, which was created by the United Jewish Appeal Rabbinic Cabinet and the National Conference on Soviet Jewry, also reminds the reader that there was still work to be done. It even included an appeal from UJA-Federation and a donation form for readers to fill out and send in.