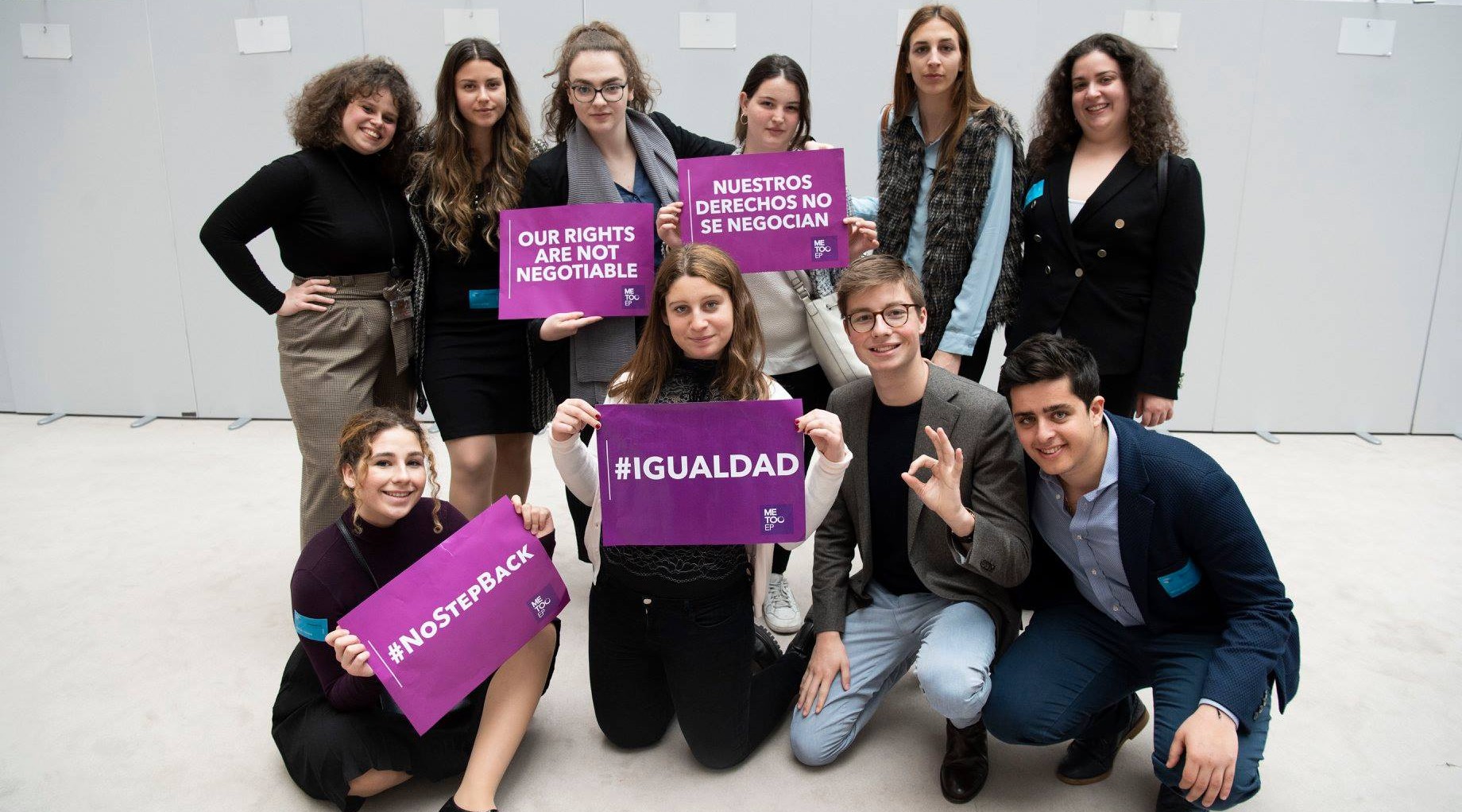 Young Jews committed to Judaism, professional success and community leadership are the backbone of the JAcademy gap-year program. (Courtesy of JAcademy)
Advertisement

But when she saw a flier at her local synagogue advertising a Jewish gap-year program offering professional training within a Jewish milieu, her interest immediately was piqued. Trier has a tiny Jewish community, and Roth was eager both to meet other young Jews and advance her professional ambitions.

So Roth put off her law school plans. Now in the final weeks of the JAcademy gap-year program, Roth, 19, has spent the last year living and learning with European Jews, and doing internships at a think tank in Jerusalem, a political party in London and a law firm in Berlin.

“Before JAcademy, I wasn’t involved that much in Jewish life,” Roth said. “It’s taught me a lot about myself — my strengths, my weaknesses. I’ve also learned how to speak in public, because I want to go into politics.”

Roth is among 17 young Jews from Germany, Ukraine, Spain, Greece and elsewhere in this year’s cohort of JAcademy, a unique Europe-centered, Jewish gap-year program. The idea is to give ambitious European Jews before university or between degrees the chance to develop professional skills and gain practical job experience within a Jewish context.

The ultimate goal is to help preserve Jewish life in Europe by grooming a young generation of European Jewish leaders. Based in Berlin but including stints in London, New York and Israel, the program has a nine-month curriculum that includes three internships and instruction meant to bolster leadership qualities and Jewish identity.

The participants are young people committed to Jewish community but from places without significant Jewish infrastructure. They need not be very Jewishly knowledgeable, but they must have strong Jewish commitment.

“Sometimes, people are very committed to Judaism, or to professional success, or to being involved in their community. What’s rare is to be committed to all three things,” said JAcademy’s interim program director, Daniel Fabian. “We’re looking for people who are professionally ambitious and seriously interested in dedicating their gap year to discovering their Jewish roots.”

Competition for acceptance into the program is fierce. For this year, its third, over 90 Jews ages 18-26 applied for just 17 slots. The program is funded by the Ronald S. Lauder Foundation in conjunction with the Genesis Philanthropy Group, the American Jewish Joint Distribution Committee, the Pratt Foundation, various private funders and student fees of about $16,000 per year. Private funders underwrite scholarships for those who cannot afford the fees.

The highlights of the year are the various trips and internships. Participants spend two months of the year in Israel, including a six-week professional internship in the field of their choice. 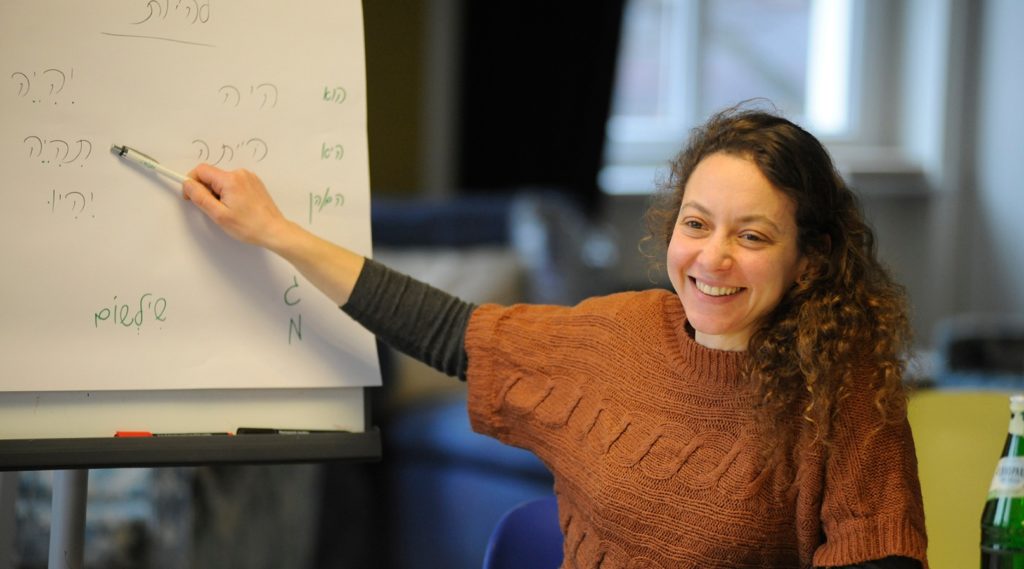 In addition to classes in business and leadership, the Berlin-based gap-year program includes classes in Jewish religion, Zionism and modern Hebrew. (Larry Luxner)

“Greece is wonderful, but the Jewish community is really small and I wanted to explore Jewish life abroad,” said Kapeta, who has a bachelor’s degree in architecture. “I grew up in a Christian Orthodox environment, so I had to tolerate people around me who didn’t know I was Jewish.”

This month, students are interning in London. Last fall, they flew to New York to spend two weeks meeting with successful CEOs, managers, rabbis and Jewish leaders, including businessman and philanthropist Ronald Lauder. Later this spring, they’ll do a third internship in Berlin. The year also includes shorter field trips, including to the European Union headquarters in Brussels and to sites of Jewish interest in Poland.

Between trips, the students live in apartments in Berlin’s Mitte neighborhood and take classes at the nearby JAcademy building. Subjects include business English, critical thinking, conversational Hebrew and Jewish studies. Classes range from interpretation of Biblical texts to Zionist history.

“I know what it means to have a diploma but not that much experience,” said JAcademy’s project manager, Elmira Tarivierdiieva, 26, who was born and raised in Odessa, Ukraine before moving to Germany. “When you go for an interview, they want to see a CV and 15 years of experience. This project was created to give people different experiences in one year so when they go looking for jobs they’re prepared. It’s something new and unique.”

JAcademy alumni have landed prestigious jobs, including a Greek woman who started her own art gallery and a Ukrainian who became a partner in a local kosher wine venture.

The program’s main focus, however, is to bolster the future of Jewish life in Europe. 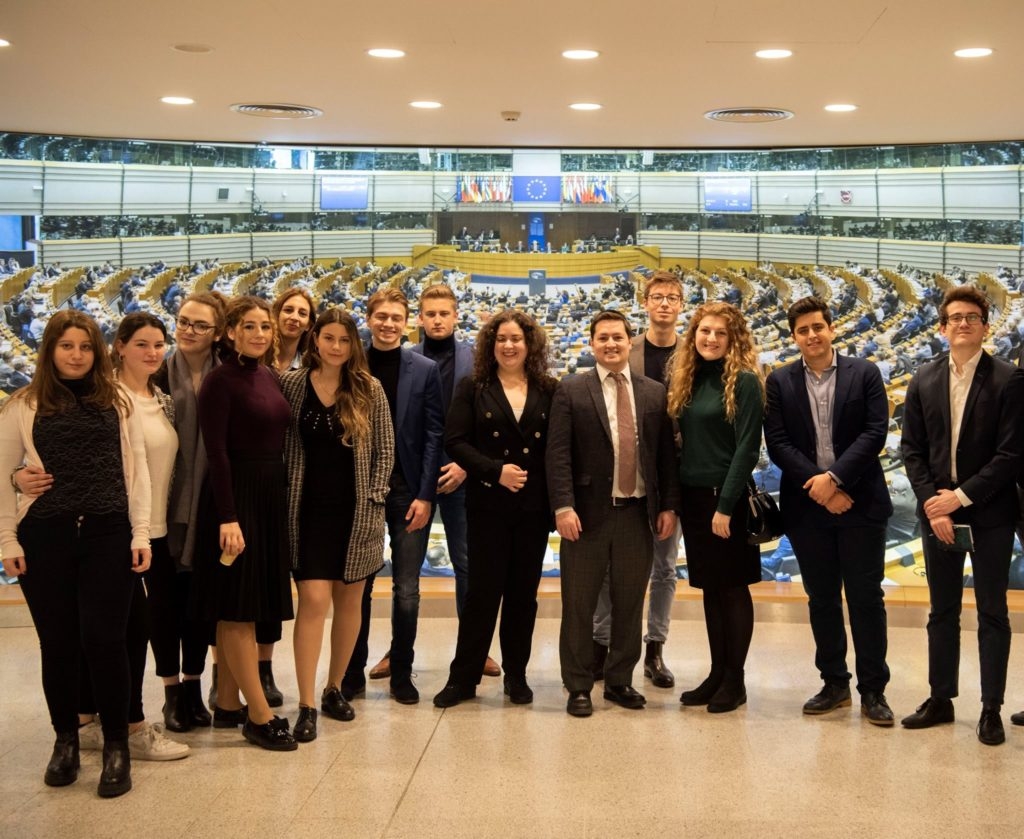 The JAcademy gap-year program includes field trips to places like the European Union headquarters in Brussels. (Courtesy of JAcademy)

“We want people to stay here and build communities in their hometowns and be active,” Tarivierdiieva said. “We’re basically creating a community of future European Jewish leaders.”

Noemi Becher, 22, of Frankfurt, enrolled in JAcademy after obtaining her bachelor’s degree in economics and business administration from Frankfurt’s Goethe University.

For her Israeli internship through JAcademy, Becher, who speaks fluent Hebrew, went to Israel’s Finance Ministry, where she helped collect budget data for government regulators. In London, Becher interns at an asset management company. She’s hoping her Berlin internship will be in strategic consulting.

“I was looking to take some time before getting my master’s to figure out where I want to go,” Becher said. “JAcademy has been an amazing opportunity to do just that while staying connected to my Judaism and gaining professional experience.”

Jan Laiter, 18, was born in the small German town of Magdeburg, which is home to only 600 Jews. His parents immigrated there from Ukraine.

“School doesn’t really teach you how to deal with your future,” Laiter, who speaks Russian, German, English, French, Spanish and Hebrew, said in an interview in Berlin. “Here, you have a big Jewish community. It was a good change for me to come here, to find out who I really am in society, and where I’d like to go in my professional and religious life.”

In Israel, Laiter interned at Jerusalem’s Eyal Hotel, working the reception desk. In London, he’s working at the Athenaeum Hotel. In Berlin, he’ll help plan events for the Central Council of German Jews.

Noam Miller, JAcademy’s director of education, said he hopes to show young Europeans that one can live a Jewish life and succeed in business — whether on Wall Street or Fleet Street. And being an observant Jew doesn’t necessarily mean moving to Israel.

“We’re not against aliyah,” Miller said. “It’s just that the premise is that Jewish life is going to continue in Europe, and must be strengthened.”

Josh Spinner, CEO of the Lauder Foundation, said that what makes JAcademy special is its unified approach to the opportunities and challenges facing young Jews today.

“To succeed professionally, personally and as a Jew, it is not enough simply to have values,” Spinner said. “You must live those values, and have the tools to do so.”