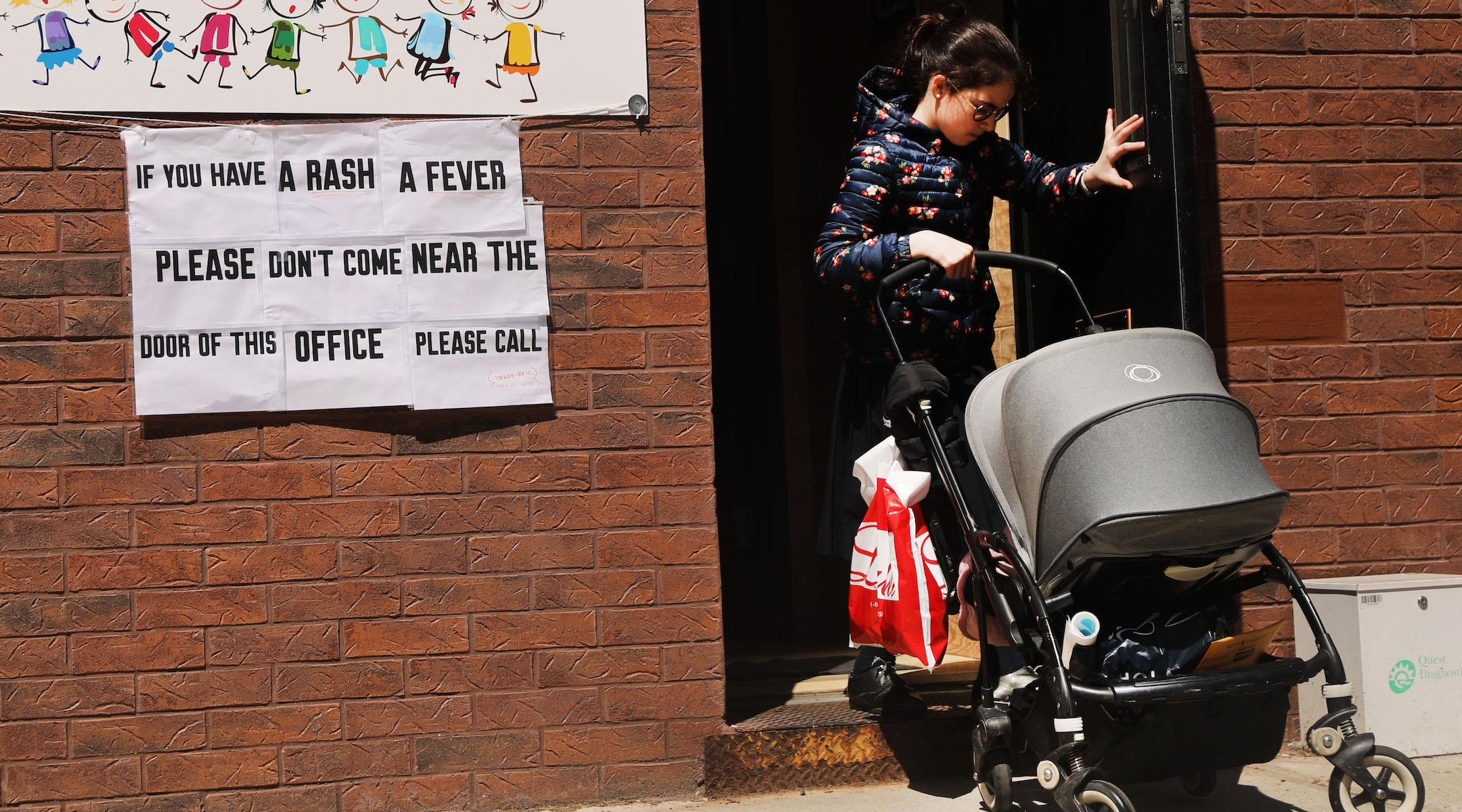 NEW YORK (JTA) — In January, before a measles outbreak spread throughout Orthodox Jewish neighborhoods in New York, Channie Klor booked a Passover stay at a hotel in Pennsylvania for her family of seven.

Four months later, more than 500 cases of the disease have spread throughout the United States in an outbreak linked to Orthodox Jews, especially unvaccinated Hasidim who were infected. And the disease is highly contagious: A single Orthodox traveler from Israel, who went to Michigan via New York City, is alleged to have spread the disease to 39 people after he was misdiagnosed.

That left Klor with a dilemma: Stay home, immunize her 8-month-old baby early in the recommended range for the immunization or stay away from public areas for the length of her hotel stay.

It’s a calculation being made by many of the tens of thousands of religious Jews who will be filling hotels for Passover, dining and mingling in close quarters for eight days.

This year, program organizers in the Greater New York City area are trying to make sure that their clientele isn’t carrying the disease. None who spoke to the Jewish Telegraphic Agency said they were asking for vaccine records. But some said they had asked their guests to be vaccinated before they arrive at the hotel.

“We notified all the people that if they are not taking shots, they cannot come to our hotel,” said Rabbi Motty Katz, manager of the Katz Pesach program at the Long Island Hilton in Huntington, New York. “We’re going to be very strict on that. … If you don’t take a shot, don’t go to a public place.”

Rabbi Yitzchok Neger, one of the managers of the Passover program at the Wyndham Golf Resort in Lancaster, Pennsylvania, said he was “pretty confident we don’t have any virus or contagious situation where we are, with the guests we have.”

“Our guests are not coming from any of the Hasidic communities, so the other communities are very much in favor of it,” he said, suggesting immunization is more common in non-hasidic Orthodox communities. “A lot of our people are coming from places where the rabbis sent a letter to everyone that they should be vaccinated. Some of the shuls here had free clinics.”

Every year, kosher caterers and tourism companies rent out entire hotels for the holiday, providing guests with food, religious services, classes and entertainment. More than 100,000 Jews worldwide, mostly Orthodox, will be celebrating the holiday at a Passover hotel, according to Raphi Bloom, founder of TotallyJewishTravel.com, a website that serves as a clearinghouse for Passover vacation bookings.

The measles outbreak has been linked to low vaccination rates. Jane Zucker, assistant commissioner of New York City’s Bureau of Immunization, says largely Hasidic Williamsburg, in Brooklyn, has one of the lowest rates of vaccine coverage among young children.

Agudath Israel of America, which represents haredi Jews, insists that the Orthodox neighborhoods with outbreaks have vaccination rates rivaling those of “many other municipalities,” but that their communities may be more susceptible for other reasons: Its members travel abroad frequently and have tightly related social networks, as well as many children at ages most susceptible to the disease.

Asking guests not to come if they are not immunized is the best approach for hotels to take this close to the holiday, said L’via Weisinger, a member of Emes, Hebrew for “truth,” a new group of Orthodox nurses that encourages vaccination. Had Weisinger theoretically been able to set policy at a hotel, she would have asked every guest to vaccinate and then checked their immunization records at the door.

“You don’t have a right as a citizen to go to a Pesach hotel,” she said. “It’s private, so if they say ‘Unless you’re vaccinated, you’re not welcome,’ there’s nothing wrong with that. Here’s your money back. Whatever.

In the end, Klor decided to give her baby an early MMR shot. In total, about 30 members of her extended family will be spending Passover at the Wyndham Golf Resort. Had she not been able to immunize her kids, she said, Klor would have spent the holiday keeping them out of the hotel’s public spaces.

“For a second, I thought, maybe we should rent a house instead,” said Klor, a nurse practitioner in South Bend, Indiana. “He’s premature, so I’m a little more protective of him. If I wasn’t able to get him that vaccine, I probably would have ended up going, but would be extremely uneasy the entire time.”

Even outside of the Passover hotel industry, the holiday leads to people crowding together on planes, in synagogue and in stores. A pre-Passover clothing drive in Baltimore required those attending to sign a legal waiver that they had been vaccinated. Klor said that in South Bend, people have been rushing to get vaccinated before the holiday.

“I am angered that I need to voluntarily subject him to more pain than should be necessary because I want to protect him from measles,” Klor wrote on Facebook, referring to her baby. “When you choose to vaccinate it’s about more than you, it’s a selfless decision that protects our most vulnerable population.”