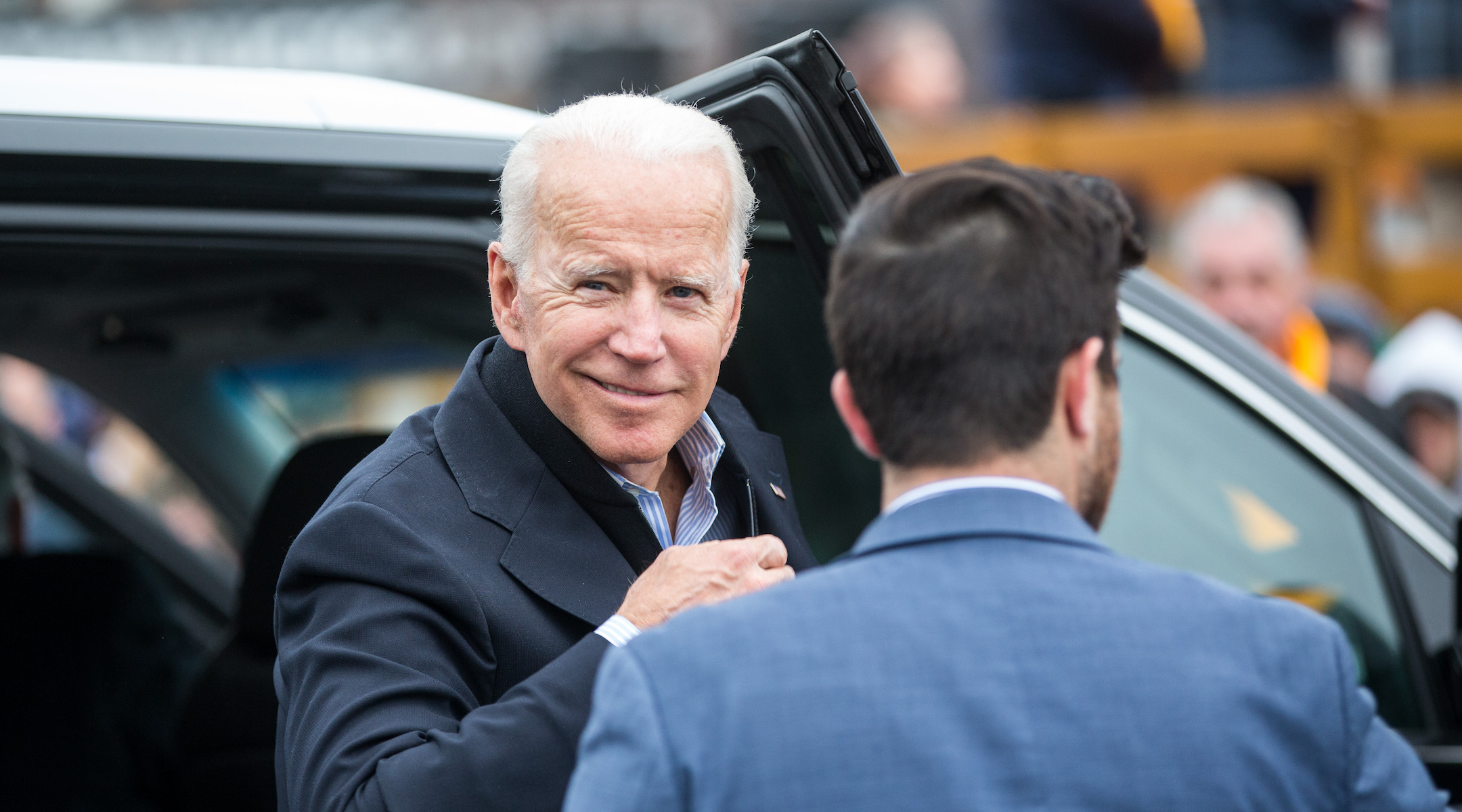 WASHINGTON (JTA) — Joe Biden, a born and raised Roman Catholic who likes to cross himself when making a point, knows what faith he would be if he were ever overcome with doubt about his own.

“If I’m going to switch, I know where I’m going,” the former vice president said in 2016 at an Ohio political event when someone in the audience called him a “mensch.” Biden went on to describe the pile of yarmulkes he had accumulated from attending Jewish events.

Goodness knows, he’s been collecting them for a while, and his Jewish ties run deep: One of his first overseas visits in his long career as a senator was to Israel, on the eve of the 1973 Yom Kippur War.

Which is all the more remarkable considering that Biden represents a state, Delaware, with a Jewish population estimated at 15,000.

How deep is Biden’s Jewish record? So deep that it was hard to pick just five Jewish things to know about him.

Here are his greatest hits, sure to be repeated now that Biden, 76, announced on Thursday that he is entering the stakes for the Democratic presidential nomination.

He learned pro-Israel from his dad.

Biden, born in 1942, likes to recall a childhood memory of his salesman father, Joseph Sr., and the international debate in 1948 over whether to endorse the existence of the new State of Israel. Typically he leavens the tale with details suggesting a raucous Irish-American upbringing in which folks liked talking over one another more than they did eating.

“My education started, as some of you know, at my father’s dinner table,” Biden said at an American Israel Public Affairs Committee annual conference in 2013. (“As some of you know” was an understatement: Many folks on the pro-Israel circuit have memorized Biden’s Jewish anecdotes, but that doesn’t diminish the applause.)

“We gathered at my dinner table to have conversation, and incidentally eat, as we were growing up. It was at that table I first heard the phrase that is overused sometimes today, but in a sense not used meaningfully enough — first I heard the phrase ‘Never again.’

“It was at that table that I learned that the only way to ensure that it could never happen again was the establishment and the existence of a secure, Jewish state of Israel. I remember my father, a Christian, being baffled at the debate taking place at the end of World War II talking about it” — baffled, that is, that anyone would consider voting no.

All rumors you’ve heard about a “Golda” drinking game among reporters who cover Biden Jewish events are utterly baseless.

So, that cleared up, here’s the deal: Joe Hearts Golda Meir. A lot. The story he tells about meeting with her in 1973, when he was a 30-year-old senator, is a staple of his Jewish speechmaking.

It was on the eve of the Yom Kippur War. Biden toured Israel and the territories it held and witnessed the chain-smoking, American-raised Israeli prime minister reviewing maps. He could not but notice heightened military tensions.

Meir, meeting Biden at her office, asked him to pose for a photo.

“She said, ‘Senator, you look so worried,'” he recalled, speaking at an Israeli Embassy Independence Day celebration in 2015. “I said, ‘Well, my God, Madame Prime Minister,’ and I turned to look at her. I said, ‘The picture you paint.’ She said, ‘Oh, don’t worry. We have’ — I thought she only said this to me. She said, ‘We have a secret weapon in our conflict with the Arabs. You see, we have no place else to go.'”

Biden has a Jewish family. He jokes about it. But it’s complicated.

Biden has three children who grew to adulthood. (His first wife, Neilia, and a baby daughter, Naomi, died in a car crash right after his 1972 election to the Senate.)

“By the way, I’m the only Irish Catholic you know who had his dream met because his daughter married a Jewish surgeon,” he said at that 2016 Ohio political event.

This is where it gets complicated: Beau died of cancer in 2015. Hallie subsequently had a romantic relationship with his younger brother (also a son of Neilia), Hunter, who was splitting up with his wife, Kathleen. (It’s not clear if the relationship with Hallie precipitated the divorce.) The Hallie-Hunter relationship reportedly is over.

Added ick factor? According to The Daily Mail, the elder Biden confessed that growing up in Wilmington, Delaware, he had a crush on Hallie’s mother, Joan.

“I was the Catholic kid. She was the Jewish girl. I still tried. I didn’t get anywhere,” Biden said at a Delaware Jewish event in 2015.

In 1982, Menachem Begin met with senators at the U.S. Capitol. The prime minister fumbled when asked about Israel’s recent Lebanon invasion, but rallied when Biden confronted him about West Bank settlement expansion and suggested that new settlements would undercut U.S. support for assistance for Israel. Biden reportedly banged the table as the exchange grew heated.

Begin’s reply has become lore among his followers.

“This desk is designed for writing, not for fists,” he said, according to an account written by a confidante just after Begin’s 1992 death. “Don’t threaten us with slashing aid. Do you think that because the U.S. lends us money it is entitled to impose on us what we must do? We are grateful for the assistance we have received, but we are not to be threatened. I am a proud Jew. Three thousand years of culture are behind me, and you will not frighten me with threats. ”

Biden was chastened enough that two years later he appeared at the annual conference of Herut Zionists of America (Herut was Begin’s original party) and blamed the impasse in Middle East peace on Saudi Arabia, Jordan and the Palestine Liberation Organization. Biden’s pledge then: “My first order of business in the new Senate will be to educate my colleagues on the financial sacrifices Israel has made as a result of Camp David.”

In 2010, a matured Biden figured out passive aggressiveness worked better than fist banging when it came to settlements. On a friendly visit to Israel, Biden was surprised to learn that Prime Minister Benjamin Netanyahu’s government had announced new building in eastern Jerusalem. Biden’s payback? He made Netanyahu wait 90 minutes for a dinner meeting.

He knows his audience.

Within two months in 2013, Vice President Biden spoke to AIPAC and then its bete noir, J Street, the liberal Jewish Middle East policy group. The thrust of his AIPAC speech at the beginning of March? Israeli leaders, including Netanyahu, want peace, and the Arabs need to step up.

“Israel’s own leaders currently understand the imperative of peace,” he said. “Prime Minister Netanyahu, Defense Minister Barak, President Peres — they’ve all called for a two-state solution and an absolute secure, democratic and Jewish state of Israel to live side by side with an independent Palestinian state. But it takes two to tango, and the rest of the Arab world has to get in the game.”

The thrust of his J Street speech, mid-April? Netanyahu was taking the country in the “wrong direction.”

“I firmly believe that the actions that Israel’s government has taken over the past several years — the steady and systematic expansion of settlements, the legalization of outposts, land seizures — they’re moving us and, more importantly, they’re moving Israel in the wrong direction,” he said.