Netanyahu: Gaza battle ‘not over’ despite cease-fire 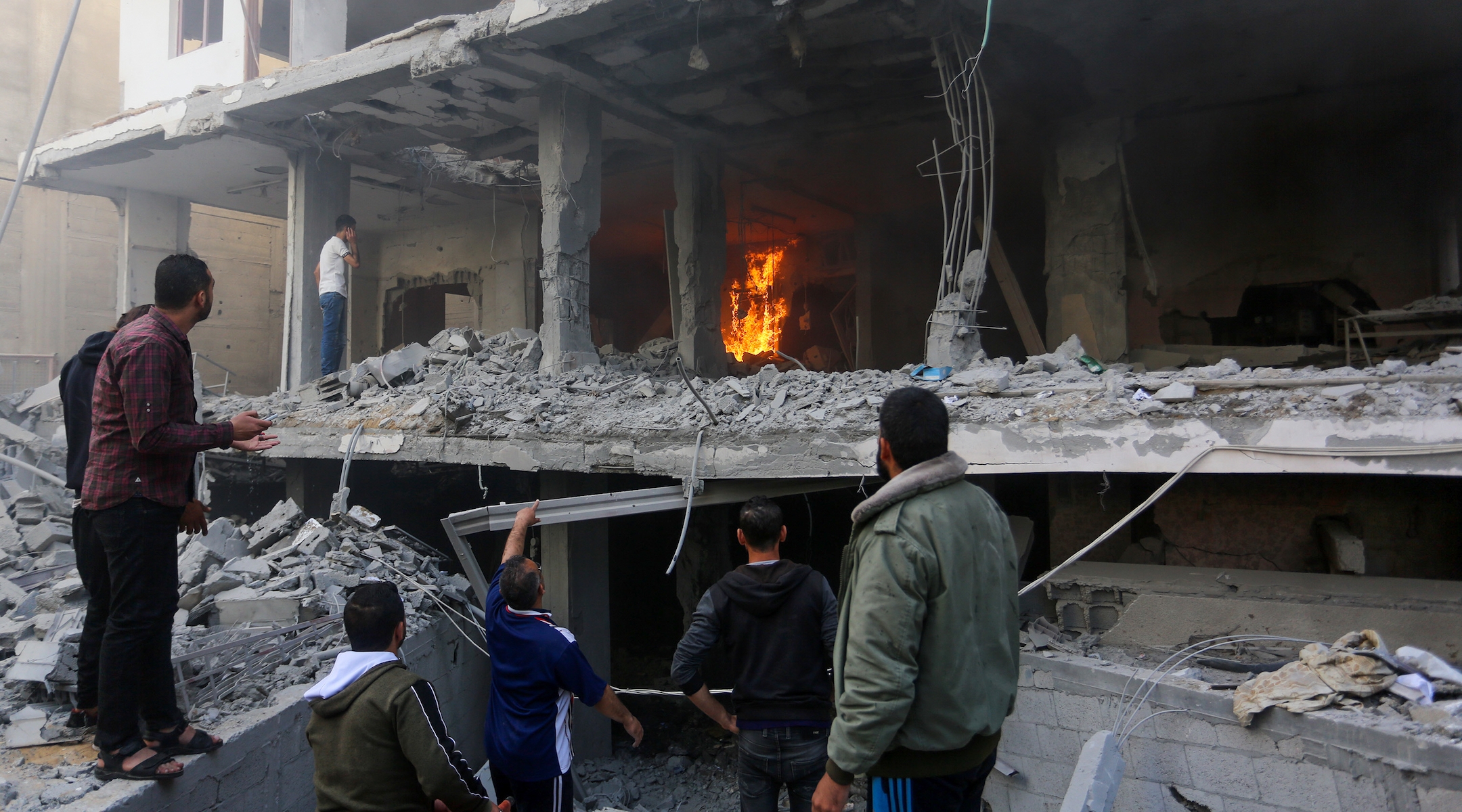 Palestinians walk through the wreckage of a building that was damaged by Israeli airstrikes in Rafah, in the southern Gaza Strip, May 5, 2019. (Abed Rahim Khatib/Flash90)
Advertisement

JERUSALEM (JTA) — Despite Monday morning’s cease-fire, which ended two days of intense fighting between Israel and Hamas, the “campaign is not over,” Prime Minister Benjamin Netanyahu said in a statement.

“Over the last two days we struck Hamas and Islamic Jihad with great force,” Netanyahu said. “We hit over 350 targets. We struck at terrorist leaders and operatives and we destroyed terrorist buildings. The campaign is not over and it demands patience and sagacity. We are prepared to continue. The goal has been – and remains – ensuring quiet and security for the residents of the south. I send condolences to the families and best wishes for recovery to the wounded.”

Over the course of the weekend, Hamas launched nearly 700 rockets at Israel, killing four people and injuring many more. As of Monday, 25 Palestinians were reported dead by the Hamas-controlled Gaza Health Ministry.

According to The Times of Israel, Hamas also vowed to continue the conflict, asserting that “this round is over, but the conflict will not end until we regain our rights.”

During Sunday’s Cabinet meeting, Netanyahu had announced that he had instructed the Israel Defense Forces to continue its “aggressive attacks” against Hamas, noting that the army was reinforcing its forces surrounding the Gaza Strip. Several members of the Cabinet vowed not to show any restraint because of the upcoming Eurovision Song Contest being held May 14-18 in Tel Aviv, which will bring thousands of spectators and media from across Europe. It is widely believed by Israelis that Hamas was attempting to disrupt the event in order to harm Israel.

Heavy criticism in #Israel|i media against #Netanyahu and his handling of the current #Hamas and #PIJ ceasefire in #Gaza. pic.twitter.com/DmE9vUvpZl

The decision to agree to a cease-fire was harshly criticized by Netantahu’s political rivals, with Likud Knesset member Gidon Saar saying that “timed intervals between rounds of violence directed at Israel and its citizens are getting shorter, while Gaza’s terror organizations are getting stronger. The round of fighting has been delayed rather than prevented.”

Likewise, former IDF Chief of Staff Benny Gantz, head of the opposition Blue and White party, called the cease-fire “another surrender to the blackmail of Hamas and terrorist organizations.” Israel, he alleged, had lost its capacity for deterrence.

Moshe Yaalon, another former chief of staff politically allied with Gantz, also attacked Netanyahu, calling him on Twitter a weak leader only interested in his own political survival.

Conflict with Hamas can be politically dangerous for Netanyahu. While nearly 70 percent of Israelis approved of Netanyahu’s decision not to launch a large-scale operation in Gaza in late 2018, a Midgam poll conducted in November showed that nearly three-quarters of Israelis initially expressed disapproval of the prime minister’s handling of that escalation.

The latest round of conflict resulted in significant damage. According to Haaretz, out of 690 rockets launched from Gaza, 240 were intercepted by Israel’s Iron Dome missile defense system.