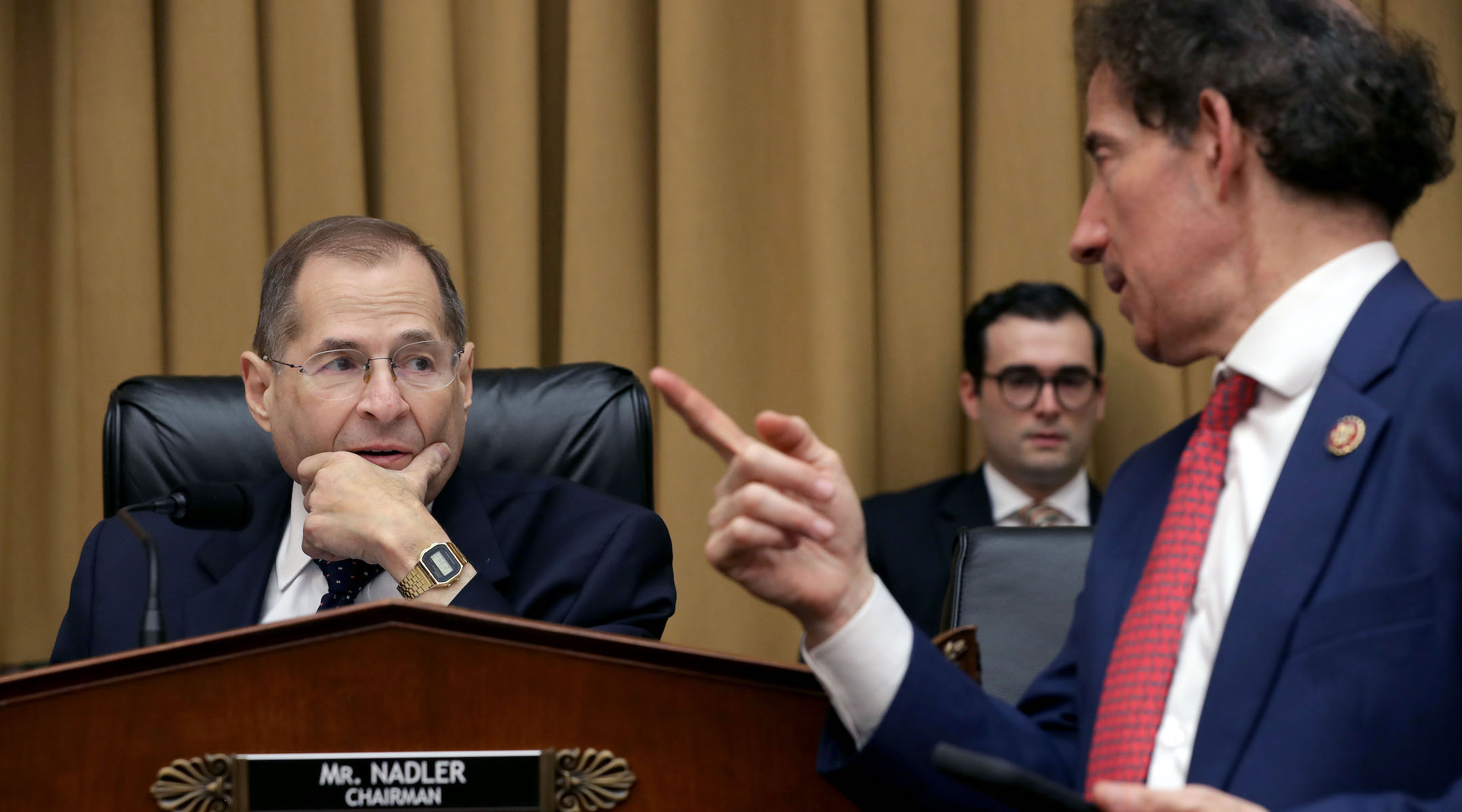 (JTA) — If the Jewish delegation in the House of Representatives were to vote on opening impeachment proceedings today, President Donald Trump would probably be safe.

A tally by the Jewish Telegraphic Agency shows that only five of the 25 Jewish House Democrats support launching an impeachment inquiry at this point. Ten are on the record against impeachment (at least for now) and eight appear to be on the fence. Two — one veteran Congress member and one freshman — have somehow managed to keep mum.

It’s safe to say that the two Jewish Republicans — Lee Zeldin of New York and David Kustoff of Tennessee — do not support impeachment. Zeldin called the Mueller report into Russian meddling in the 2016 campaign and how it intersected with the Trump campaign a “witch hunt.” Kustoff said Democrats “can finally move on” following the report’s release.

Across the entire House Democratic caucus, and among some presidential candidates, there’s a chorus of progressives calling for impeachment. They say the Mueller report, which probed 10 episodes of possible obstruction of justice by the president without reaching a judgment, plus the administration’s defiance of subpoenas make impeachment the best way to investigate alleged misdeeds by the administration.

But Speaker Nancy Pelosi is so far urging caution, pointing to the other investigative tools Congress has at its disposal as well as the near certainty that the Republican-controlled Senate would vote to acquit Trump.

Here’s what every Jewish Democrat in the House of Representatives has to say (or not say) about impeaching Trump:

Sherman is the hipster of impeachment: He was into it before it was cool. Sherman and Rep. Al Green of Texas filed articles of impeachment against Trump in July 2017. They accused Trump of obstructing justice by seeking to end the investigation into former National Security Adviser Michael Flynn and by firing FBI Director James Comey.

Cohen also has some impeachment hipster cred: He and four other Congress members filed articles of impeachment against Trump in November 2017. Along with accusing Trump of obstructing justice for essentially the same reasons as Sherman and Green, these lawmakers accused the president of violating the Constitution’s foreign emoluments clause due to his alleged business conflicts of interest.

Yarmuth co-sponsored Cohen’s 2017 articles of impeachment. On Tuesday, he told The Hill regarding impeachment, “I’ve been there a long time.”

If Don McGahn does not testify tomorrow, it will be time to begin an impeachment inquiry of @realDonaldTrump.

On Wednesday, Cicilline wrote a thread of tweets he called “Impeachment 101,” which outlined the process.

Raskin has emerged as a leading cheerleader of impeachment after being against it earlier this year.

“I flipped over,” he told PBS NewsHour on Tuesday. “Last week I was with where most people were in saying let’s give it some more time. But now I just — I have seen enough. And I think that we do need to move forward at some point, and I hope quickly, to an impeachment inquiry.”

When it comes to impeachment, Nadler is one of the most powerful Congress members in the chamber. As the chairman of the House Judiciary Committee, he controls one of the key stages of the impeachment process. Before the entire House votes on whether to impeach the president, his committee would investigate the matter and vote on whether or not to impeach.

So what’s his position? It’s unclear.

“It depends what comes out,” Nadler told CNBC last week. “It depends where the American people are, whether they want to go that way or not. I don’t want to make it sound as if we’re heading for impeachment. Probably we’re not … Maybe. It’s hard. I don’t know.”

Deutch, also a member of the Judiciary Committee, called Trump’s refusal to cooperate with Congress a “constitutional crisis,” according to Roll Call. But he’s not quite ready to call for impeachment.

“It’s a dangerous combination of obstruction of justice and obstruction of Congress,” he said on May 9. “At that point you need to look at however we would respond to a constitutional crisis. And impeachment is certainly one way to do it.”

The chairman of the House Intelligence Committee said this week that the case for impeachment “gets stronger the more they stonewall the Congress,” according to The Hill. He added that the White House is “certainly pushing the Congress in that direction by obstructing everything.”

The San Diego County congresswoman said last month that “There are many, many things there for us to look at, for us to investigate, and I think that’s a reasonable thing for us to be doing right now,” according to a local TV channel. The channel, KUSI, reported that she saw the Mueller report as a road map to impeachment, but did not quote her saying so.

The freshman congressman said at a town hall in late April that he believes Trump obstructed justice, according to The New York Times. Responding to a question about impeachment’s potential political costs, he said, “I swore an oath to the Constitution, not to protect and defend the Democratic Party.”

“President Trump needs to be held accountable for abuses of power and unacceptable behavior outlined by the special counsel,” Rep. Lowenthal said, according to Random Lengths News. “We can’t take impeachment off the table — but the process must be open and must be credible in the eyes of the American people. A narrow, partisan process, which would certainly be blocked by the Senate, could further harm our institutions and undermine confidence in the democratic process.”

Phillips, a freshman centrist, echoed Deutch in saying he is not on board with impeachment yet but feels like he’s on the way.

“I’m not there yet personally, but there’s no question I’m growing more and more concerned,” he told The Hill this week. “I put what’s in the best interest of the country and our constitutional responsibility first, and I don’t want to see our country go through that, but they are making it awfully, awfully difficult.”

“I’m not sure,” Schakowsky said this week, according to Roll Call. “I want to hear these arguments. I certainly, I believe that [Trump] has definitely committed impeachable offenses. The question is how do we proceed to follow up on all the misdeeds that we’ve seen.”

Three weeks ago, Levin said Trump should “probably be impeached” but that it shouldn’t happen quite yet.

“We need to develop the story, whether it leads to impeachment or not,” Levin said, according to the Michigan Advance. “It’s a political thing, and we need to do our job under the Constitution to hold him accountable and we’ll see where it goes. But it’s just kind of superficial to say impeachment. We need to do the oversight.”

Frankel told CNN last month, after the completion of the Mueller investigation, that most Democrats were focused on quality-of-life concerns as opposed to impeachment, and that congressional investigations should run their course.

“We are not focused on the Mueller investigation, the report,” she said. “I mean, we acknowledge its importance, but we’re dealing with everyday bread-and-butter issues … We are going to do our constitutional duty. I think most of us Democrats have the patience to let that play out.”

Engel, the chairman of the Foreign Affairs Committee, said last month that Democrats “should be cautious” with impeachment, according to The Hill. But he voted for the separate impeachment motions in 2017 and 2018 when Democrats were in the minority.

Rose, a moderate congressman from a district that voted for Trump, said that impeachment could send Democrats back to the minority in the House.

“Right now we’re in this incredibly childish game of impeachment chicken, and everyone has to start acting like adults,” Rose said this week, according to Politico. “Let’s go back to actually doing the work of the American people that they sent us here to do.”

The former chairwoman of the Democratic National Committee said this week that Democrats should let the investigations play out, according to NBC.

“I think we need to make sure that we do as much investigating as we can,” she said. “And if that leads us to looking into impeachment, we’ll get there. But one step at a time.”

Slotkin, a freshman, said Washington is too focused on matters of oversight and not enough on issues that affect her constituents’ daily lives.

“I believe in checks and balances and the constitutional division of powers, but I also know that I get stopped in the grocery store constantly and what people are asking about is the price of health care and the price of prescription drugs,” Slotkin told The Washington Post this week.

The freshman representative said she wants to let the investigations play out.

“My concern right now is that I don’t feel that the institution of Congress is being respected,” she said this week, according to the Morning Call. “I think there is an active cover-up of documents and evidence, and that concerns me terribly, but I will ultimately wait to see what the committees of jurisdiction determine.”

The freshman congresswoman said Democrats should focus on defeating Trump in the 2020 election.

“I stand by my earlier statement that the fastest way to remove the president from office is to vote him out in 18 months,” she told the Seattle Times this week.

“Politics should neither motivate a rush toward nor a retreat from impeachment,” Schneider’s statement said. “Instead, Congress’s decision must be driven solely by the facts and our constitutional responsibility to hold the President to full account… I have committed from the beginning that I will be guided by the facts and will follow them wherever they lead.”

Luria, who is in her first term, told JTA that she wants to see the investigations play out and that impeachment would be divisive for the country.

“Going down the path of impeachment would be very divisive for the country,” she said in a statement. “We need to have all of the facts before we consider such an option, and I support the important investigative work being done by the appropriate committees in the House.”

Rep. Nita Lowey of New York, the chairwoman of the House Appropriations Committee, has not commented on impeachment and did not respond to a JTA request for comment.

Rep. Josh Gottheimer of New Jersey declined to answer the question in an interview with JTA this week.

“I’m not going to answer your question,” he said.