I told my fiance not to convert to Judaism. Now I’m reconsidering. 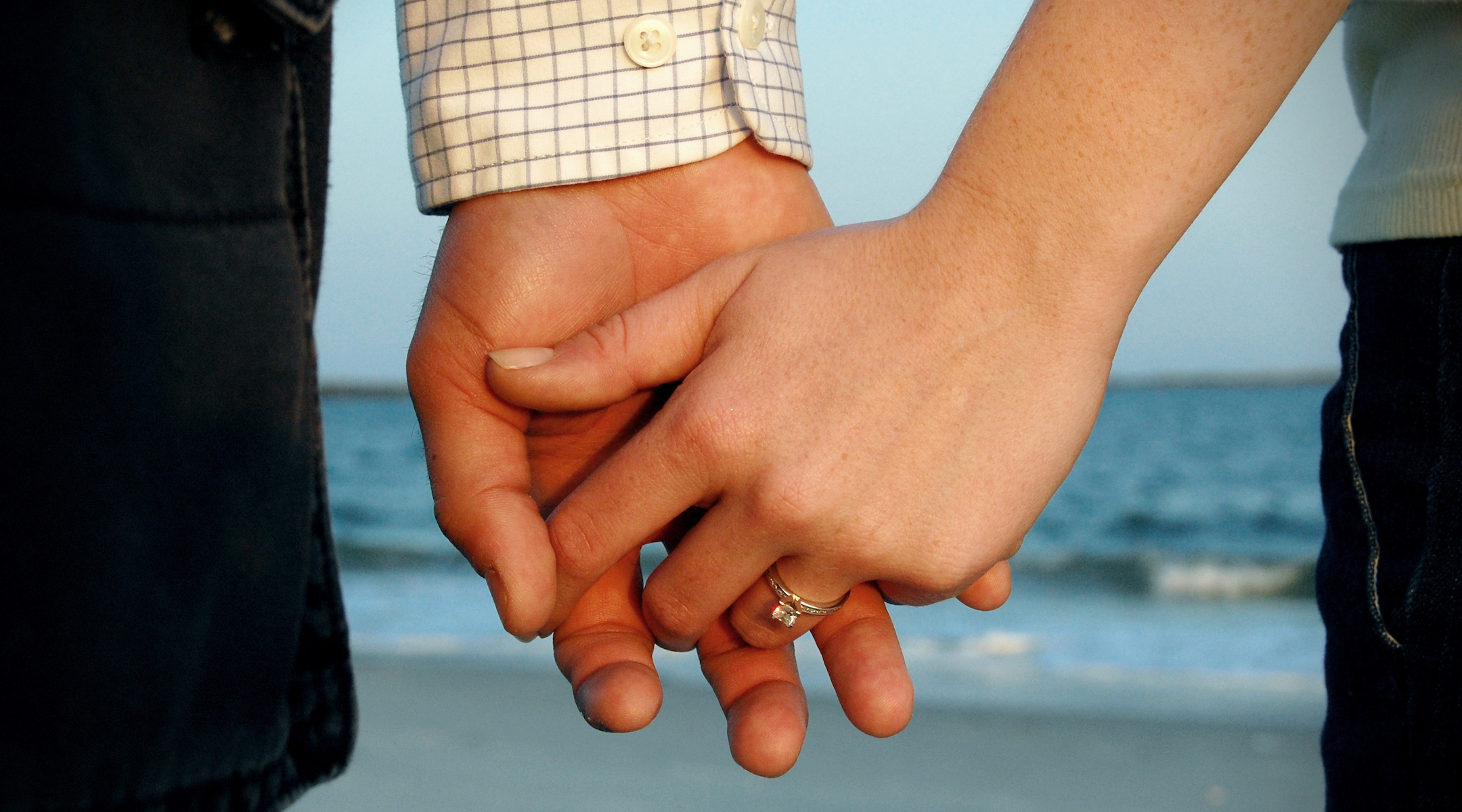 An illustrative photo of an engaged couple (Aaron Alexander/Flickr)
Advertisement

I don’t remember exactly how soon it was after we became engaged that my fiance, Tony, offered to convert to Judaism. But I do remember telling him not to.

For us, the decision to be married was less of a romantic whirlwind than it was a series of conversations. Were our values the same? Did we have similar ideas about money, about where to live? Did we really want to keep doing this for (hopefully) the rest of our lives? The answer to these questions, it turned out, was yes.

Tony grew up in a Catholic family but became an atheist even while his parents were still dragging him to Mass on Sundays. I was raised Jewish, but my family wasn’t very observant. We rarely attended synagogue, only celebrated the big holidays and — here’s the clincher — I didn’t have a bat mitzvah. But I still felt deeply Jewish. In college, I even went to the trouble of tacking a Jewish studies degree onto my psychology bachelor’s.

Tony, on the other hand, came away from his Catholic upbringing feeling quite skeptical of religion.

Given our backgrounds, you might imagine that religion would be a fraught topic for us. Amazingly it never has been. Tony has always been extremely willing to include Judaism in our shared life.

When we moved in together, we put up a mezuzah in our doorway. We’ve developed a routine where I make the potato knishes for Rosh Hashanah while Tony makes the challah. Tony makes the latkes for Hanukkah (a job that I loathe and he enjoys) while I make the brisket. And we share all of the work it takes to pull off our giant Passover seder. We’ve always celebrated Christmas the Jewish way, with Chinese food and a movie (no tree, no gifts). And when we first started to seriously imagine a future together, we agreed to raise our children Jewish.

So why did I tell him not to convert? I was flattered by the offer, but it seemed like too much work. Our schedules already were maxed out. Our free time already was limited. Did Tony really need to go through a year or more of conversion classes for something that would be largely symbolic? After all, our children would be Jewish just by virtue of me being their mother.

Would a formal conversion really change how our life looked and felt? It didn’t seem like it. So I told him not to bother.

I only know one Jew by choice: my mom. She went through the conversion process after my parents were married but before they had kids. No one asked her to convert, but she felt called to Judaism and wanted to give her children a strong Jewish identity. So after a year of study at the biggest synagogue in town, into the mikvah she went.

There’s a joke that converts know more about Judaism than those who are born Jewish, and in my family at least, this was always true. My mom was the authority on holidays, rituals, prayers. She knew it all and was able to provide context and knowledge that I otherwise wouldn’t have had. And I believe it’s largely thanks to her decision to convert that I grew up feeling Jewish.

Tony and I have now been married for nearly 2 1/2 years. In less than six months I’ll turn 30. The hypothetical Jewish children we’ve been talking about since early on in our relationship are still hypothetical, but they keep moving their way up our to-do list, and as the prospect of starting a family gets real, I find myself yearning for more Judaism in my life. More ritual, more community, more Jewish experiences.

And so, a few months ago, around the time that I found myself fantasizing about hosting Shabbat dinner every week (not going to happen, but something to strive for), I realized I’d made a mistake when I told Tony not to bother with converting.

Luckily his offer wasn’t a one-time-only thing. Conversion is still on the table. And we’ve spent the past few months visiting different synagogues for Friday night services whenever we can. We found a community that feels like a good fit for us and are hoping to become full-fledged, paying members.

Officially joining a synagogue isn’t something I ever imagined wanting to do. But with Jewish life in America under attack more than ever during my lifetime, visible Judaism has begun to feel more important to me. And I’m drawn to the automatic support system that belonging to a synagogue offers, the comfort that rituals can provide in times of uncertainty. If we have a baby, we’ll get up on the bimah and do the naming ceremony. If someone dies, we’ll call the rabbi to help us organize a funeral and a shiva. Sometimes it’s nice to know what to expect.

And while it’s true that our children will be Jewish whether or not Tony converts, I wish a sense of certainty for them. An unquestioning knowledge of who they are. And I wish the same for Tony. Converting offers a chance to remove the inevitable awkwardness whenever Tony is asked if he’s Jewish. It offers him more ease, more comfort, when navigating Jewish experiences that are slowly becoming a bigger part of our lives.

We both believe that raising our future children Jewish is a chance to give them something rare, something precious, something important. It turns out it’s something Tony wants to give himself, too.