David Friedman gave Netanyahu half a nod for West Bank annexation. What happens next? 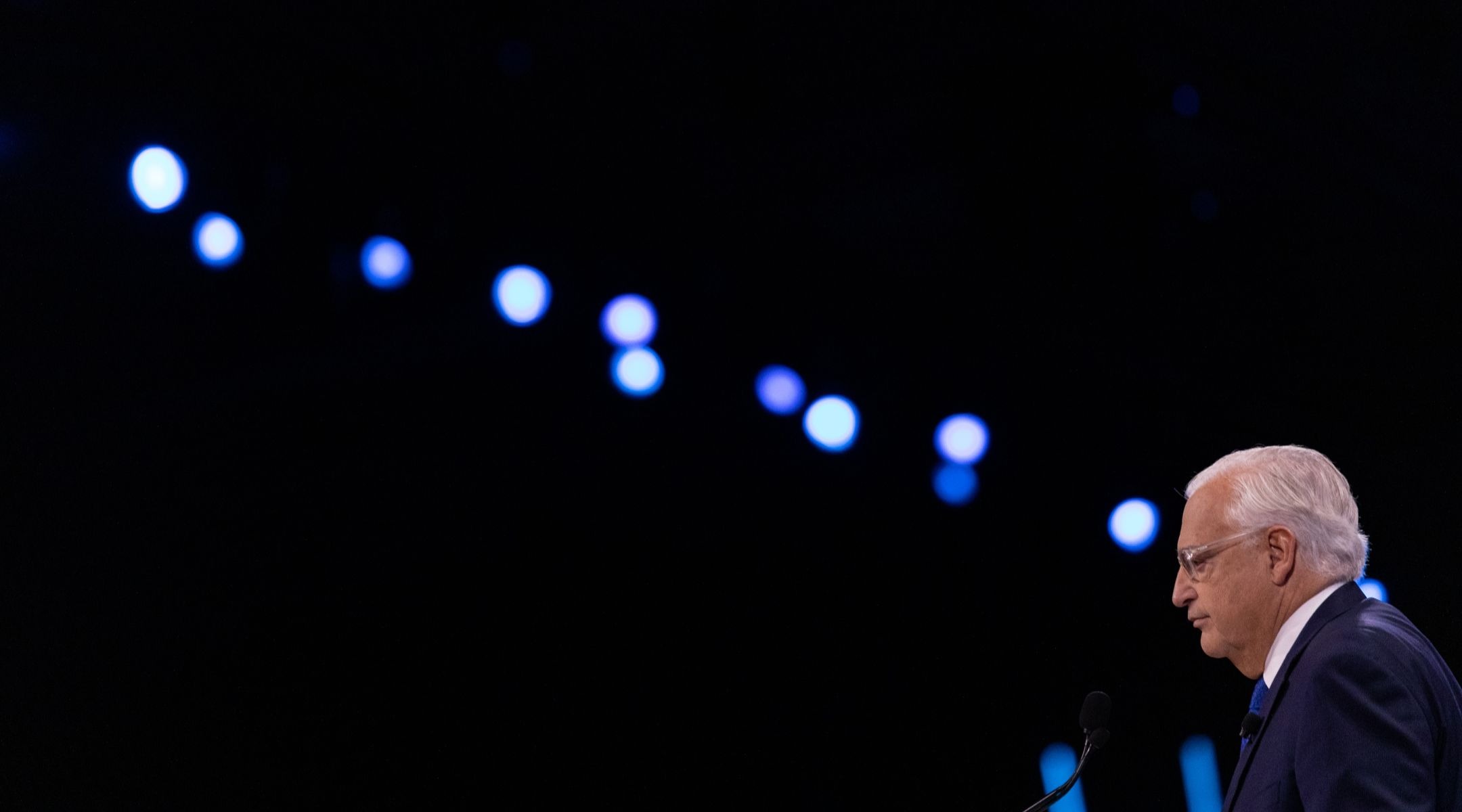 WASHINGTON (JTA) — David Friedman, the U.S. ambassador to Israel, said Israel “has the right to retain” some of the West Bank.

What was it exactly that Friedman said in a New York Times interview. And what happens next? War, war crimes trial, one state, two states?

Before we get to what the ambassador said, we first have to deal with what prompted his comment. The Times asked Friedman to speak on Israeli Prime Minister Benjamin Netanyahu’s pre-election promise.

Days before the April 9 vote, a TV reporter questioned Netanyahu about what was next on the territorial agenda now that the United States had recognized Israeli sovereignty over the Golan Heights.

“Will we move ahead to the next stage?” the reporter asked.

“Yes. I will extend sovereignty,” the prime minister responded, “but I don’t distinguish between the settlement blocs and the isolated ones because each settlement is Israeli and I will not hand it over to Palestinian sovereignty.

“I will not divide Jerusalem, I will not evacuate any community and I will make sure we control the territory west of Jordan.”

As The Jerusalem Post’s Herb Keinon wrote Monday, Netanyahu appeared to be carefully avoiding the term “annexation,” which could be a war crime under international law. The problem with that semantic maneuver is that there is no distinction between “extending sovereignty” and “annexation.”

Friedman used neither the “annexation” or “extend sovereignty” terms. Instead he spoke of Israel “retaining” parts of the West Bank.

“Under certain circumstances, I think Israel has the right to retain some, but unlikely all, of the West Bank,” he said.

On its face, this is not unusual: The Clinton, George W. Bush and Obama administrations envisioned Israel retaining parts of the West Bank — but under a peace agreement, with mutual land swaps.

The difference is that The Times reporter, David Halbfinger, asked Friedman what the Trump administration would do if Israel annexed the West Bank unilaterally.

One way to interpret that is that the U.S. could see fit to accept a move by Israel to treat some areas of the West Bank as fully part of Israel, short of formally annexing them. That represents a difference between the Trump administration and its predecessors, which closely watched and at times condemned any settlement expansion, saying such moves either made the possibility of a viable Palestinian state more remote or undermined the “road map” to a negotiated settlement.

Friedman, who himself raised funds for a West Bank settlement before becoming Trump’s ambassador to Israel, appears to be saying that era is over. The Trump administration no longer picks at every announcement of a building expansion in eastern Jerusalem or the West Bank.

How the sides reacted

Israeli settlers celebrated Friedman’s comments as a signal that the Trump administration was not interested in the two-state solution reviled by Israel’s right-wing parties.

“It’s time Israel decided its future and it’s good that we have a friendly power like the U.S. working with us,” Oded Revivi, who heads the Efrat Regional Council, told Arutz Sheva, the media outlet close to the settlement movement.

Palestinians said Friedman’s remarks were another reason to skip the summit that President Donald Trump’s son-in-law, Jared Kushner, has planned in Bahrain later this month to unveil the economic portion of his Israeli-Palestinian peace plan.

Friedman’s New York Times interview made Palestinians, who already are boycotting the Trump administration after its recognition of Jerusalem as Israel’s capital, even more furious.

“In what logic does Friedman think that Israel has the right to annex parts of the West Bank?” the Palestinian Authority Foreign Ministry said in a statement.

“Friedman takes the position that you can’t comment on what you don’t know about, which is the only proper position for a diplomat to take,” she said in an interview. “Wait for something to happen, see what happens, hold it up against a variety of consequences and make a decision.”

War crimes: The International Criminal Court is considering Palestinian Authority complaints that Israel has committed war crimes, among them actions related to its settlement activity. Palestinians say Israel violates international law because it is treating as its own occupied territory seized during a war. The Trump administration has made clear repeatedly that it will vigorously challenge any ICC attempt to charge Israel, including administering sanctions on ICC officials. Annexation could force the ICC’s hand.

War: Trump’s Jerusalem announcement helped trigger the sustained protests on the border between the Gaza Strip and Israel, which at times have turned violent and in April spurred an exchange of combat over several days.

While Kushner has alienated the Palestinians, he has cultivated close ties with Sunni Arab states, and they will attend the Bahrain conference.

Support for Kushner’s plan among those states would likely not withstand an uprising among Palestinians, a factor that might explain Kushner’s newfound caution regarding his peace plan. The Bahrain summit will focus exclusively on investment and economic opportunity for the Palestinians. Final-status issues will be discussed at an undetermined date, if ever.

Netanyahu, who cherishes the closeness he has cultivated with the Trump administration, may not want to rock the boat. He has been notably silent about his pre-election pledge since the vote.

One state, two state: Annexation would, the peace-watching community agreed, accelerate the death of the two-state solution, which could be a recipe for violence. Both Netanyahu and Trump have retreated from expressed support for a two-state outcome.

“That’s not a peace plan,” Martin Indyk, a top negotiator under Clinton and Obama, and a distinguished fellow at the Council on Foreign Relations, said on Twitter. “It’s a plan for continued conflict and the end of Israel as a Jewish and democratic state.”

The single actor still favoring a two-state solution, the Palestinian Authority, would be forced to give up on that dream, said Debra Shushan, the director of policy and government relations at Americans for Peace Now, which favors a two-state outcome.

“Annexation would lead to increased popular pressure on Palestinian President Mahmoud Abbas to reverse the PLO’s support for two states and its recognition of Israel’s right to exist,” she said in an email. “Palestinians would intensify efforts for equal citizenship and rights for all between the Mediterranean Sea and the Jordan River, and their calls would gain support internationally, including in the U.S. Ambassador Friedman’s green-lighting of annexation, which Prime Minister Netanyahu will find difficult to resist, will be the ruin of the Zionist dream of Israel as a democratic national home for the Jewish people.”

Coincident to The Times interview with Friedman, The Wall Street Journal ran a story on growing support among Palestinians for a single state, one in which they would have a voice.

Jonathan Schanzer, a vice president at the Foundation for Defense of Democracies, read that article and foresaw a recipe for violence.

“Let’s be honest. The one state thing is not a solution,” he tweeted. “And if it were somehow implemented, it would effectively mean the eradication of Israel as we know it.”

At the very least, some Palestinian activists say, annexation would force Israel to face the contradictions of fully governing millions of people who are not citizens of their state. Annexation also would make advocacy for a single binational state easier, said Yousef Munayyer, the executive director of the U.S. Campaign for Palestinian Rights.

“It’s always been easier to make an argument here in the United States for equal rights than it was for separatism,” Munayyer said in an interview. “The average American does not want to get into a nationalist dispute between two foreign peoples that they might not know the history of — but everyone understands equality before the law, equal rights, racism, and discrimination.”