Eric Fingerhut served in Congress. He says leading Hillel was a harder job. 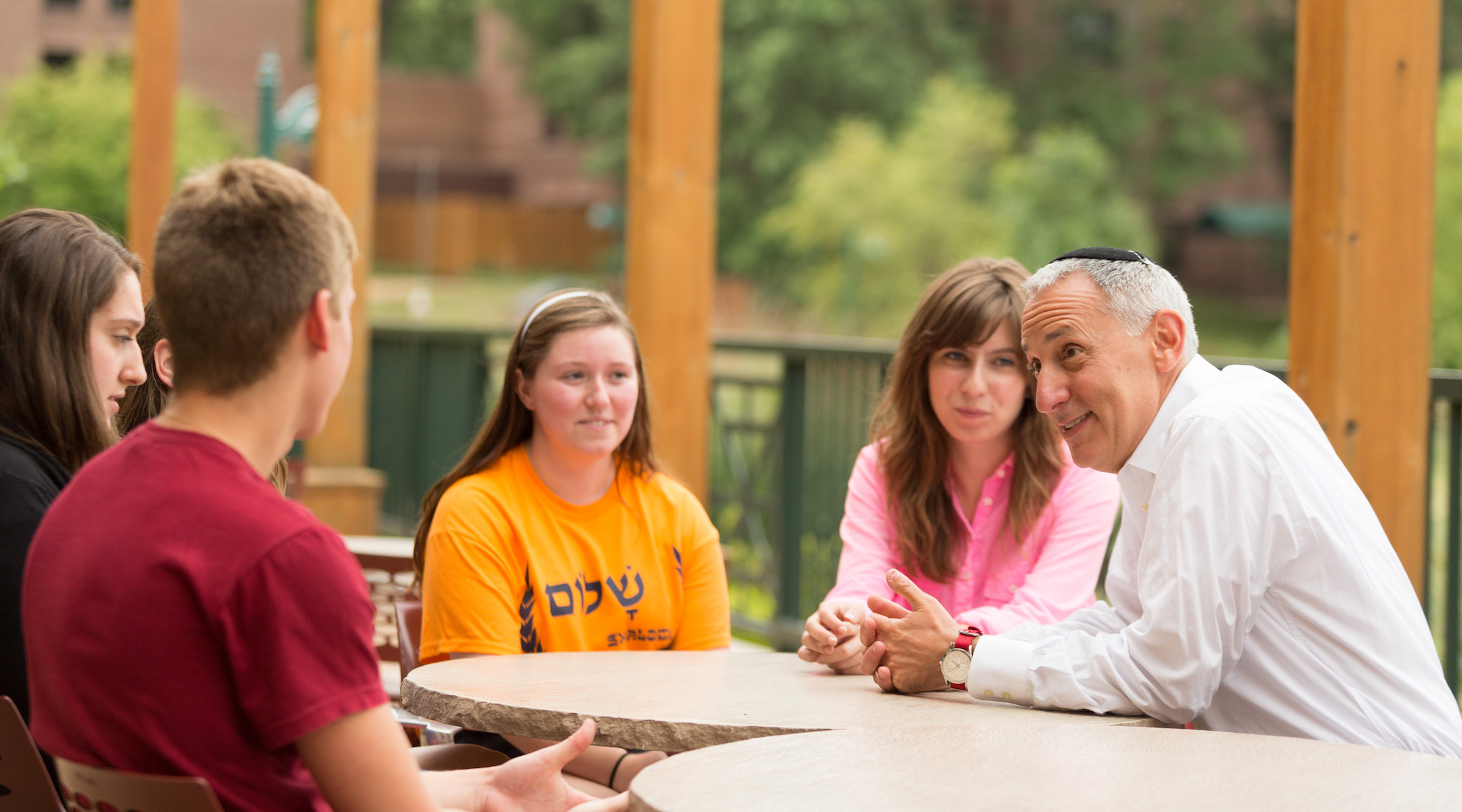 Eric Fingerhut speaks to students at the Hillel Institute, a conference in St. Louis, in 2013. (Jonathan Heisler)
Advertisement

NEW YORK (JTA) — Eric Fingerhut believes in the “big tent.” But is the tent collapsing?

For six tumultuous years, he has served as the president of Hillel International, the umbrella group for more than 500 Jewish centers on college campuses across the country. He’s leaving his position on July 1 to become the president of the Jewish Federations of North America.

Up to the end Fingerhut, a former Democratic congressman from Ohio, has insisted on a kind of establishment centrism that feels like it’s disappearing in the Jewish world and beyond. He likes to talk about an open tent with firm poles — the idea that Hillel should welcome as many people as possible while also maintaining clear ideological red lines, particularly on Israel.

However, during his tenure, Hillel has been condemned by a growing rebellion of anti-Zionist students — and also by a right-wing Israeli official. Long-held ideas of who is Jewish, and what Judaism means, have continually been called into question even as rival, strictly Orthodox groups have grown on campus. One of its most prominent donors was accused of sexual harassment, and Fingerhut says in that case Hillel “did not respond as comprehensively as we should.”

Given these pressures, is his a brave stand for pluralism in an increasingly polarized world? Or does it seek to preserve a bygone communal consensus and do it, of all places, on campus, one of the most incendiary spaces in the country?

“It’s certainly true that we are in a time when the differences of opinion are magnified,” he told the Jewish Telegraphic Agency in an interview at Hillel’s New York City offices last week. “Overall, I think Hillel has been enormously successful in providing that big tent on campus.”

What is the big tent?

“A big tent is a piece of canvas with four poles pulled as tight, as far apart as it can be pulled, but still holding up the canvas,” he said, adding that “We keep our flaps open. So we welcome people even if they disagree with something that Hillel stands for.”

Statistics show the approach has worked, Fingerhut said. According to Hillel International, the number of students who come to Hillel at least once a year has doubled in his six years as president, to 137,000 from 68,000. Some 40,000 students come to six or more Hillel programs per year. Hillel says participation in trips to Israel and summer programs there have also grown.

But the most controversial tent pole, by far, has been Israel. Hillel, and Fingerhut, maintain that Israel’s existence as a Jewish state should be unquestioned, a position that used to be a given in Jewish communal spaces but is increasingly up for debate, especially among young people. Hillel’s guidelines on Israel discourse, formulated before Fingerhut took office, said Hillel will not partner with or host speakers or groups that delegitimize Israel, deny its right to exist as a Jewish and democratic state, encourage a boycott of Israel or foster an atmosphere of incivility.

The language is vague (Hillel would say flexible), and individual campus Hillels often operate independently of the national organization. That’s led to a string of controversies. In 2013, months after Fingerhut came on, the Swarthmore Hillel announced that it would host anti-Zionist speakers. A few months later Vassar College likewise declared itself an “Open Hillel,” part of a group that objects to the guidelines. Guilford College in North Carolina followed suit a year later.

In 2015, Fingerhut backed out of speaking to J Street U, the college arm of the liberal Zionist Israel lobby. He later addressed the group’s leadership and apologized. Two years later, the Ohio State University Hillel dropped the campus Jewish LGBTQ group because it co-sponsored a Purim drag show with Jewish Voice for Peace, a group that advocates an Israel boycott and more recently declared itself anti-Zionist.

In 2017, the Center for Jewish Life at Princeton University denied the local chapter of J Street U space to hold an exhibition created by the left-wing Israeli NGO Breaking the Silence. The Hillel leadership did not want to host a program alleging abuses by Israeli soldiers on Yom Hazikaron, Israel’s memorial day for fallen soldiers.

And last year, the guidelines were tested on the right. Deputy Israeli Foreign Minister Tzipi Hotovely was going to speak at Princeton, but Hillel canceled her talk after students protested her opposition to Palestinian statehood and denial of a Muslim connection to Jerusalem. The campus Chabad ended up hosting the talk, and Fingerhut apologized, writing in The Jerusalem Post that “we did not treat the Israeli deputy foreign minister with the respect that her office deserves.”

Fingerhut emphasized that the vast majority of Hillel programs aren’t subject to controversy, and that students are welcome at all programs regardless of their personal politics.

“Notwithstanding a very vigorous debate, albeit from a relatively small group of people … I think the guidelines overall have stood the test of time,” he said. “You tend to only hear one side of it. The balance that is struck in our Israel policy is to encourage a robust educational program on campus that engages people from all sides of the political spectrum in discussion and learning about the challenges facing the modern state of Israel.”

Later he said, “But we’re not going to be a platform for delegitimization.”

When the guidelines were composed in 2010, conversation on Israel was polarized — and it’s even more polarized now. The past decade has seen the founding of IfNotNow, a millennial Jewish group critical of Israel, and the proliferation of votes to boycott Israel on campus. The right wing has become more entrenched, too. In 2010, Israeli Prime Minister Benjamin Netanyahu said he supported Palestinian statehood. Now he says he supports annexing Israeli settlements in the West Bank.

But while the ban on anti-Zionist speakers at Hillel will continue, Fingerhut said Israeli government officials would be welcome at Hillel even if they opposed Palestinian statehood and favored Israeli annexation of parts of the West Bank.

“It does not come as a huge surprise to people that we’re going to probably have a disproportionate number of students and professionals who see Israel through a more left-leaning policy framework,” he said. “We don’t say one solution or another solution is the right solution … But certainly an elected member of the Israeli Knesset, if students want to hear from them, is going to be someone that they’re going to be able to hear from.”

Hillel has maintained less contentious boundaries when it comes to Jewish religious practice. Students of all Jewish identities are welcome, he said, regardless of their parents’ Jewish identity and whom they’re dating.

And while the past two decades have seen the growth of several Orthodox initiatives at colleges, from a booming network of more than 250 campus Chabad houses to programs like Meor and the Orthodox Union’s Jewish Learning Initiative on Campus, Hillel has stuck to its religious pluralist ethos. It’s the only major Jewish campus group that employs female rabbis and clergy of all denominations. And 30 Hillels have added full-time Jewish educators since Fingerhut became president.

“There’s no other organization in the Jewish world that employs among its professionals the breadth of religious leadership, truly from every denominational strain of Jewish life,” Fingerhut said. “What we ask ourselves is, ‘Are they pluralistic in their approach?’ We would expect that a Reform rabbi would be able to communicate to students the responsibility and integrity of the other streams of Judaism as well as their own, and we would expect of an Orthodox rabbi the same.”

Any contentiousness hasn’t hurt Hillel’s bottom line. During Fingerhut’s term, annual revenue combined for Hillel International and local Hillels has doubled to nearly $200 million from $90 million. But fundraising has come with its own controversy. In March, The New York Times reported allegations by Sheila Katz, a former Hillel vice president, that Michael Steinhardt, a major Hillel philanthropist, had repeatedly sexually harassed her.

Katz reported the harassment soon after it occurred in 2015, and last year, Hillel opened an investigation into the allegations. In January, the investigation concluded that Steinhardt had harassed Katz and another employee. (Steinhardt has admitted to “boorish, disrespectful and just plain dumb” behavior, but he denies harassment.) Hillel continued to accept donations from Steinhardt until last year, according to The Times.

Fingerhut acknowledged that Hillel was slow to work on its policies regarding harassment from donors. He said that now there are much clearer and faster procedures for reporting sexual misconduct.

“We did conclude that we had a couple of incidents involving donors that did constitute sexual harassment that we did not respond to as comprehensively as we should,” he said. “We’ve got training and reporting and investigation systems in place that are much clearer and more precise than they were before.”

As a former congressman, Fingerhut is no stranger to controversy and scandal. Looking back, which job was harder — Congress or Hillel?