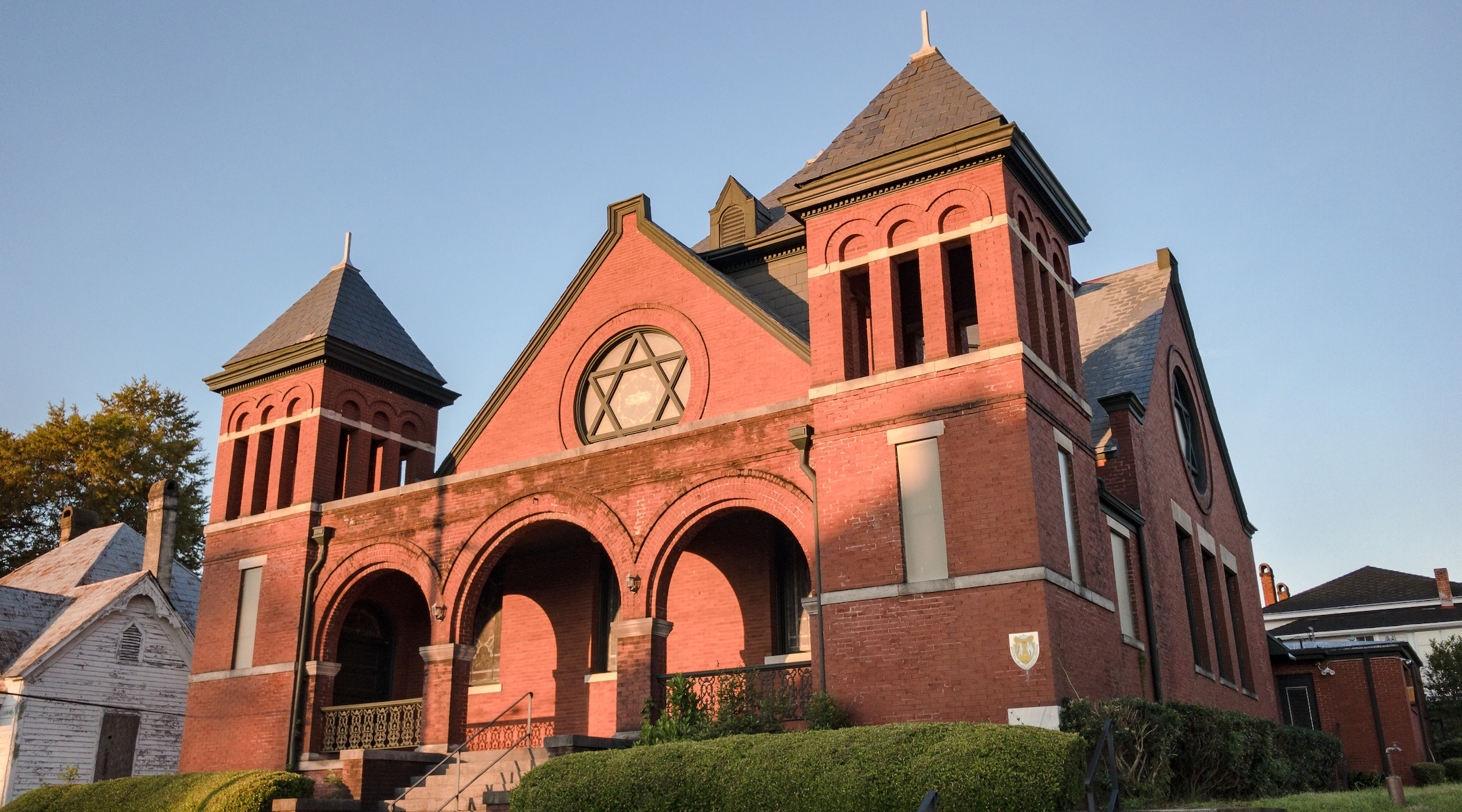 The exterior of Temple Mishkan Israel in Selma, Ala. The synagogue has four members but wants to transform into a museum. (Amy Milligan)
Advertisement

(JTA) — Whenever the lone synagogue in Selma, Alabama, needs dusting, new lighting or vacuuming, Ronnie Leet is the one who does it.

It’s tiring work — especially since the 120-year-old Temple Mishkan Israel hasn’t held regular services in years, hasn’t had a rabbi in nearly half a century and isn’t even close to having enough Jews for a minyan, a prayer quorum of 10 people.

In fact, the temple has only four members. At 68, Leet is the youngest. There are two or three other Jews in the city of 20,000 known for its role in the civil rights movement, but they’re not involved with the synagogue.

“The congregation gets smaller and smaller, and we’re getting older,” Leet said. “With a 120-year-old roof, we see issues every day with it. As every year goes by, and as it gets older and older, something is going to happen.”

Other small towns in America with dying synagogues have simply pulled the plug. Buildings are vacated, prayer books and Torah scrolls are sent elsewhere, and the dwindling membership finds other places to go or just stops going to synagogue.

It would probably be easier for Selma’s temple to follow suit. But it’s doubling down on the continued life of the synagogue.

Mishkan Israel wants to raise $800,000 through GoFundMe for renovations. A Virginia professor is trying to turn the synagogue into a cause celebre. And last year it got an email address.

“Temple Mishkan Israel is one of those stories that’s so easy for people in the United States to overlook,” said Amy Milligan, a Jewish studies professor at Old Dominion University in Norfolk who is writing a book about Selma’s Jewish life and has taken an active role in helping the congregation with fundraising and publicity. “It’s a story about an early community of Jews that continues to survive in 2019.”

There are no illusions of becoming a regularly functioning synagogue in the near future. But Mishkan Israel members and Milligan believe it still has something to say to the 81,000 tourists who filter through Selma every year visiting places like the National Museum of Voting Rights, which is just across the Edmund Pettus Bridge from the synagogue.

They plan for the synagogue to become a museum, one more dot in the city’s constellation of spaces commemorating a formative era in the Deep South. The synagogue would host exhibits on Southern Jewish history and the Jews’ role in the civil rights movement, as well as events. 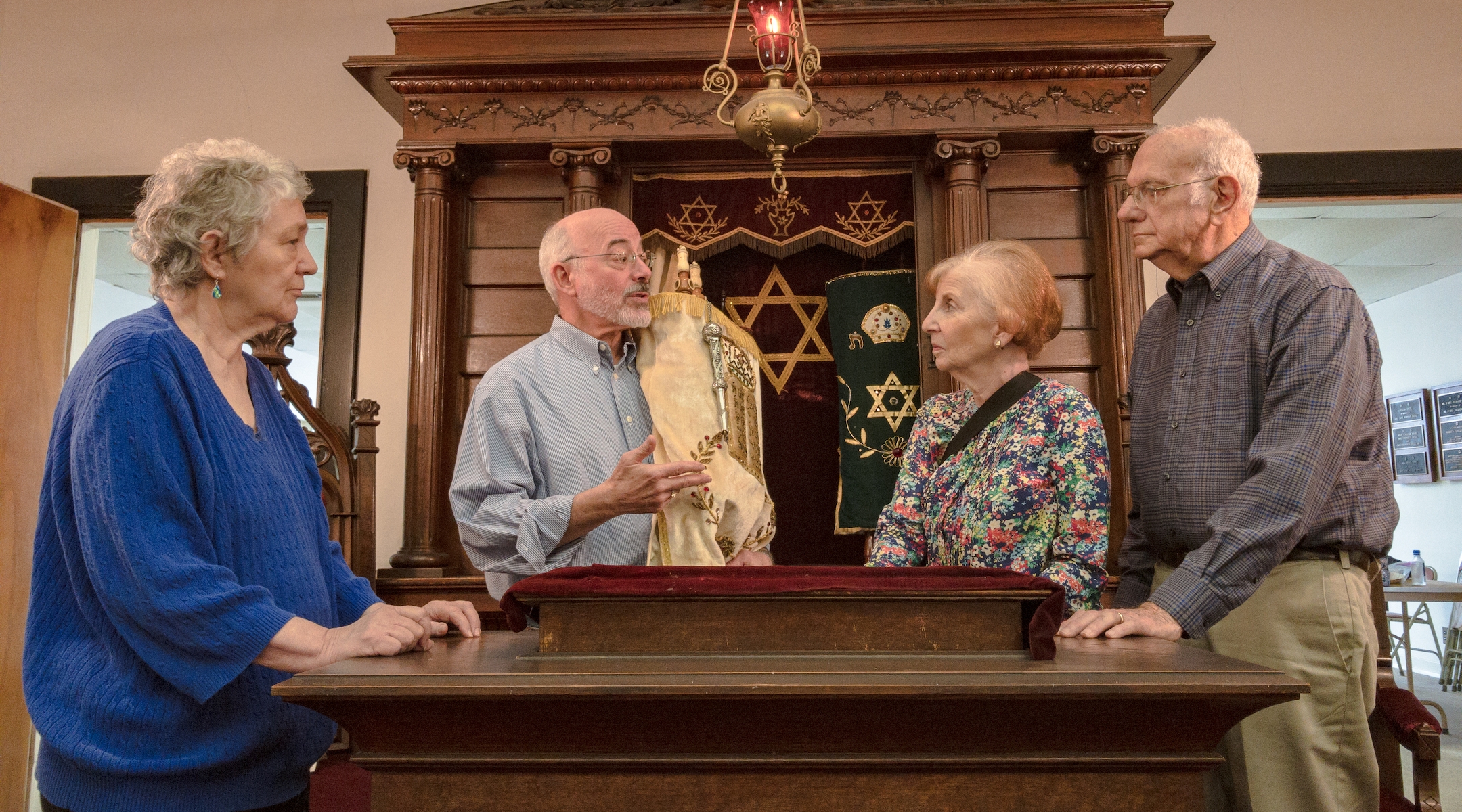 The members of Temple Mishkan Israel — from left, Hanna Berger, Ronnie Leet, Joanie Gibian Looney and Charles Pollack — stand in front of the Torah ark. The synagogue has not held weekly services for decades. (Amy Milligan)

In 2017, some 125 people prayed at the synagogue during a Jewish mission to Selma over Martin Luther King Day weekend. Two years earlier, 205 attended a commemoration at the synagogue of the 50th anniversary of Bloody Sunday, when Alabama state troopers beat nonviolent civil rights marchers on the bridge and shot tear gas at them.

Decades ago, Selma had a thriving Jewish community of as many as 500 members. Leet said that as recently as the early 1950s, half of the businesses in the city’s downtown were owned by Jews. In the 1920s and ’30s, Milligan said, Jewish businesses used to take out ads in the local paper notifying their customers that they would be closed for the High Holidays. Stores owned by non-Jews would likewise buy ads wishing Jews a happy holiday and reminding them to come by after it ended.

Jews came to Selma around the early 1830s, and the first organized services took place in 1867. Mishkan Israel moved into its current building in 1899, and it still has the original electricity system. Leet said the building is still in remarkably good condition for its age.

“It very much is a fulfillment of the American dream,” she said. “People came into Selma, they had their businesses, and they built that as a community for their children. And then they sent their kids away to college. The parents said, ‘Go have a career. I want you to prosper.'”

Despite the famous image of Rabbi Abraham Joshua Heschel marching with the Rev. Martin Luther King Jr. in Selma, Leet said the local Jewish community was not active in the civil rights movement. Other Southern synagogues were attacked, and Mishkan Israel received a bomb threat.

While Jews were comfortable in the community, Leet said they still felt uneasy about their relations with elements of the white Christian majority and did not speak out publicly for racial equality.

Milligan said a museum exhibit could provide an unvarnished portrayal of that attitude and era.

“We knew that where everybody was on Sunday morning was where we were not,” Leet said. “I think the congregation as a whole really didn’t play a part in the national movement of civil rights here in Selma. They didn’t know where it was going to fall on them.”

So far, the synagogue has raised only $6,500 online. But Leet hopes the synagogue’s diaspora will come through. In 1997, some 220 relatives of current and former synagogue members came back for a reunion.

“There’s a love across this country from people raised in Selma,” he said. “We want the country and world to know there was a wonderful congregation here in Selma, Alabama.”