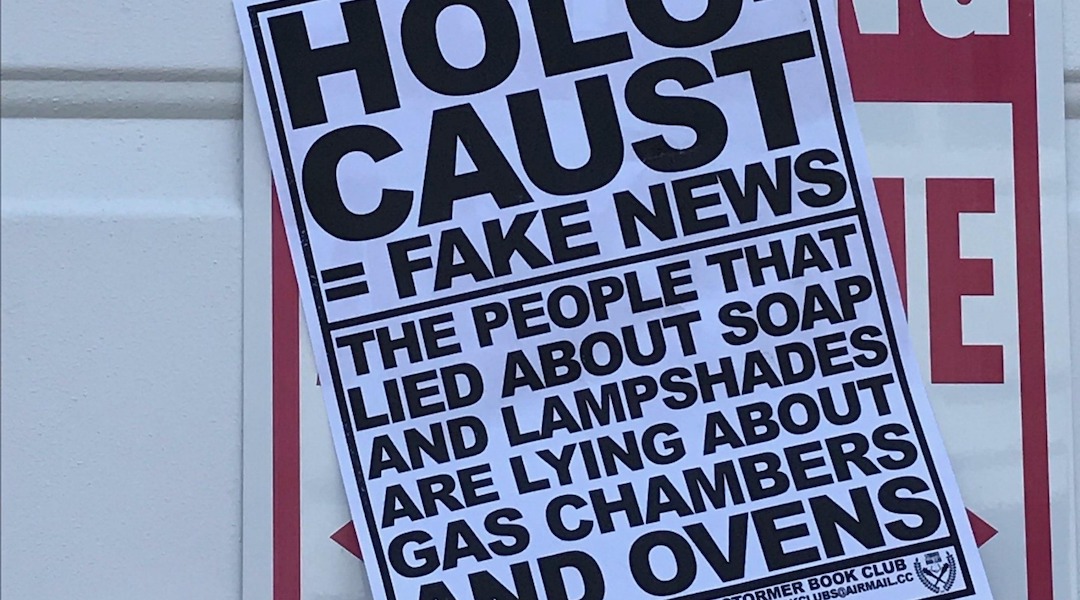 Anti-Semitic fliers were posted at a synagogue in Marblehead, Mass. (Courtesy of the Anti-Defamation League)
Advertisement

BOSTON (JTA) — Two anti-Semitic fliers that deny the Holocaust were posted at a Massachusetts synagogue, with reports of similar incidents at synagogues in two other states.

Police are investigating what the Anti-Defamation League described as a coordinated campaign by a national online white supremacist group.

The fliers at Temple Emanu-El in Marblehead, a town of nearly 20,000 with a sizable Jewish population on the state’s North Shore, were discovered Monday morning by a teacher at its religious school, according to the Jewish Journal.

The printed posters, attributed to the Daily Stormer Book Club, refer to the Holocaust as “Fake News. The people that lied about soap and lampshades are lying about gas chambers and ovens.”

They were affixed to a “no parking” sign and the synagogue’s main entrance sign, the Jewish Journal reported.

Marblehead Police Chief Robert Picariello told the local media that his department is examining surveillance video and trying to determine exactly when the fliers were placed at the synagogue.

The ADL’s Center on Extremism is aware of similar incidents at synagogues in Washington state and outside of Houston, Texas, according to Robert Trestan, ADL New England’s regional director.

A similar coordinated flier distribution was directed against churches in June and earlier this month, Trestan told JTA.

“What we are seeing is another campaign” by the white supremacist group,” he said. “They put out word to their local chapters to carry out the actions to inject hatred and racism into communities.

Temple Emanu-El’s rabbi, David Meyer, told the Jewish Journal: “Sadly, this is not an isolated or unique incident here in Marblehead or for the Jewish community – to be targeted for anti-Semitic hate literature messaging and Holocaust denial.”

Over the last several years, North Shore communities and schools have experienced anti-Semitic incidents, most recently when two Chabad rabbis were harassed with anti-Semitic slurs while walking on a main street on a Shabbat.

In 2018, Massachusetts had a total of 144 anti-Semitic incidents, the ADL reported. While down from the prior year, it was the second highest year on record.