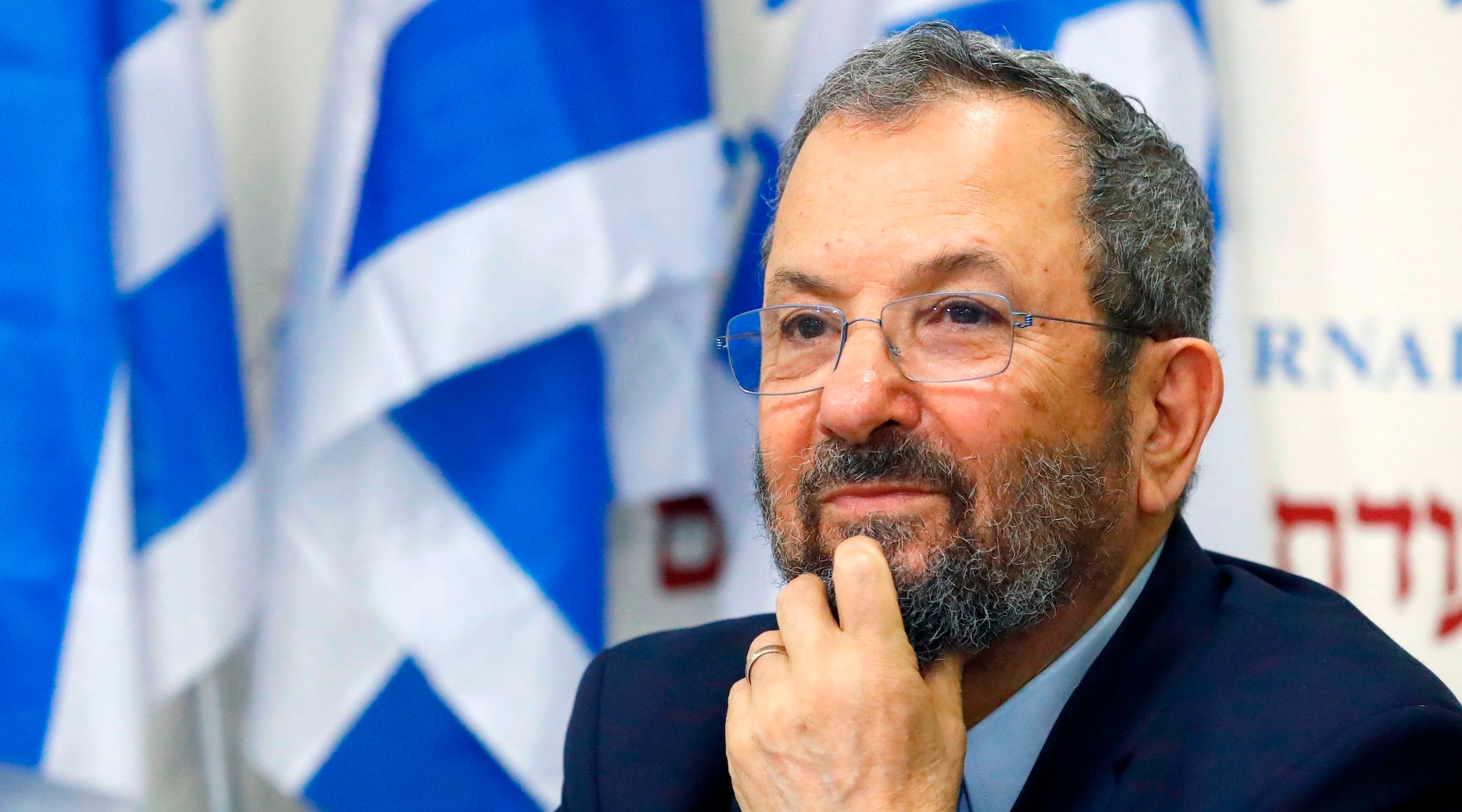 JERUSALEM (JTA) — Former Israeli Prime Minister Ehud Barak hoped to make a splash this summer in mounting a political comeback as the head of a new left-wing political party formed for the sole purpose of unseating Benjamin Netanyahu in September.

Instead his campaign has been hindered by reports of his ties to billionaire financier Jeffrey Epstein, a convicted sex offender who is facing new charges in an underage sex-trafficking case.

It’s the latest twist in a storied career that includes military exploits, a near miss on solving the Israeli-Palestinian conflict and stories about his intellect (he has a master’s degree in economic engineering systems from Stanford University) and his hobbies (they include classical piano and watch repair).

Like many Israeli politicians, Barak entered politics following a 35-year career in the Israel Defense Forces, ultimately in the top spot as its chief of staff. He served in leadership capacities in the Six-Day War in 1967 and the Yom Kippur War in 1973, and was a key planner of Operation Entebbe in 1976.

In one famous operation, in April 1973, Barak dressed as a woman to enter Beirut with a squad of Israeli commandos that killed three senior PLO leaders in retribution for the Munich Olympics massacre the year before.

Barak retired from the IDF at the beginning of 1995 as a lieutenant-general, the military’s highest rank, and as the most decorated soldier in Israeli military history, though he shares this designation with two other men.

After leaving the military, Barak rose quickly in Israeli politics and through the ranks of the Labor Party.

Even before he was elected to the Knesset in 1996, he was appointed interior minister by Yitzhak Rabin. Barak served as foreign minister under Shimon Peres, who became prime minister following Rabin’s assassination. After Peres lost to Netanyahu in the 1996 election, the first time a prime minister was directly elected, Barak became head of Labor.

Three years later, Barak defeated Netanyahu to become prime minister — the only person to have been victorious over Netanyahu for the premiership.

The Barak years were tumultuous. The former career military man restarted peace talks with then-Palestinian leader Yasser Arafat and withdrew Israeli troops from the Lebanese security zone, where they had been stationed for 18 years since the First Lebanon War. The Camp David Summit in July 2000 came tantalizingly close to a final peace accord, but fell flat and the second Palestinian intifada broke out in October of that year. The violence brought a halt to peacemaking and led to unrest in the Arab-Israeli community, which protested in solidarity with the Palestinians.

This led to a crackdown by police in Arab communities and to the death of 13 Arab demonstrators during riots in in northern Israel in October 2000. (On Tuesday, in an interview with the Kan public broadcaster, Barak apologized for his role in those deaths.) The fallout led to Barak’s resignation in December that year. He ran for re-election in February 2001, lost overwhelmingly to then-Likud leader Ariel Sharon and took a four-year break from politics.

Barak became Labor chief again in 2007 and defense minister in June of that year under Prime Minister Ehud Olmert of the Kadima party. As defense minister he led the IDF in the December 2008-January 2009 Gaza operation, remained in the post after the 2009 elections that saw Netanyahu regain the prime minister’s post and stayed until 2013. In 2011 he broke with Labor and formed the Independence Party, leaving politics again in October 2013.

In June, Barak again formed a new political party to run in Israel’s “do-over” elections, declaring “The Netanyahu regime must be felled” during the announcement. He named his new left-wing party the Israel Democratic Party, angering the Democrats Abroad-Israel chapter and confounding the Republicans Overseas Israel.

Barak said he would work to form a center-left bloc with the Labor and Meretz parties and to include Tzipi Livni, whose Hatnuah party was unceremoniously booted from its alliance with Labor ahead of the April elections. Thus far he has failed to form this bloc.

A day after Epstein was arrested in New York on underage sex-trafficking charges, he became a player in the Israeli election campaign and a monkey on Barak’s back.

Netanyahu got the ball rolling with social media posts raising questions about Epstein’s relationship with Barak. Then the Israeli and global media took over.

Epstein financed much of an investment of several million dollars formally made by Barak in the high-tech company Reporty Homeland Security, now called Carbyne, Haaretz reported. Barak entered the business relationship though other former partners kept their distance after Epstein was convicted in 2008 of soliciting a teenage girl to prostitution and served 13 months in prison.

Barak defended his decision on the Israeli news program “Meet the Press.”

“He’d served his sentence for soliciting prostitution — the indictment didn’t say she was a minor,” the former prime minister said.

Barak announced last week that his attorneys are working to dissolve the limited partnership company he formed with Epstein.

Meanwhile, the British tabloid the Daily Mail on July 16 republished on its front page photos it first ran in January 2016 showing Barak with his face covered entering Epstein’s Manhattan home. When the photo ran originally, Barak was identified as “an unidentified man … with his own security detail at Jeffrey Epstein’s New York Mansion.” Last week the photo ran alongside a second photo showing Barak leaving the apartment with his face uncovered and wearing a pillbox-shaped hat.

Barak, who married Nili Priel in 2007 after he divorced his first wife, Nava Cohen, in 2003, told the Daily Beast in an interview published July 15 that he was introduced to Epstein by the late Israeli President Shimon Peres and has met him about 10 times, including at two of Epstein’s Manhattan residences and on the financier’s private Caribbean island. But, he told the news website, “I’ve never been there at a party” and he never met any women or girls there.

He acknowledges being the man in the Daily Mail photo, saying he covered his face because of the extremely cold New York weather.

Barak has threatened to sue the Daily Mail for running the photos and insinuating that he paid a covert visit to Epstein, calling it a “blood libel.” The newspaper ignored a Barak ultimatum that it remove the article and the photos or face a lawsuit.