How poetry literally saved the life of a famed Yiddish writer 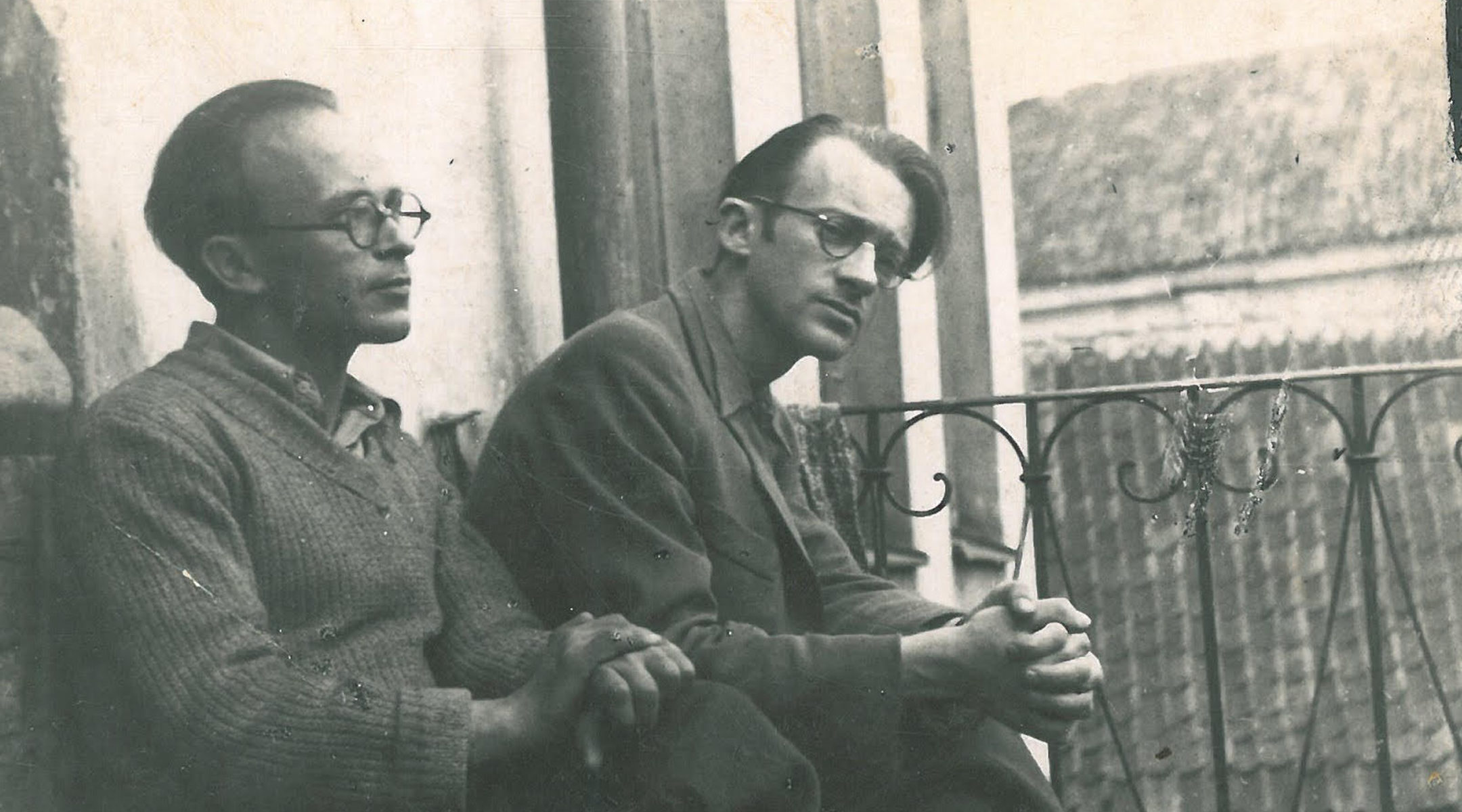 MINSK, Belarus (JTA) — When Yiddish poet Avraham Sutzkever said that poetry saved his life, he meant it more literally than many of his listeners realized.

In 1944, Sutzkever and his wife, Freydke, needed to walk through a minefield to reach the plane that would take them to freedom. And to do so, they stepped to the rhythm of poetic meter — short, short, long, and sometimes long, short, long.

His poems about the Holocaust in Vilnius and his role in saving priceless Jewish texts from the Nazis led the Soviet authorities – likely Joseph Stalin himself — to send not one but two rescue missions into Nazi-occupied Lithuania to fly the Sutzkevers to Moscow. Two years later he was tasked with testifying on behalf of the Soviet Union at the Nuremberg trials in Germany aiming to bring Nazi criminals to justice.

Nearly a decade after his death in 2010 in Israel, Sutzkever’s astonishing life story is being told on film for the first time in an award-winning documentary co-produced  by his granddaughter, Hadas Calderon-Sutzkever, with funding from the Claims Conference.

“You could take Sutzkever’s life from beginning to end and it would be the most astonishing guide to the most dramatic moments in Jewish history of the 20th century,” Yiddish scholar Ruth Wisse says in the film, which is titled “Black Honey: The Life and Poetry of Avraham Sutzkever.” It won the Yad Vashem award for movies about the Holocaust at last year’s Jerusalem Film Festival. 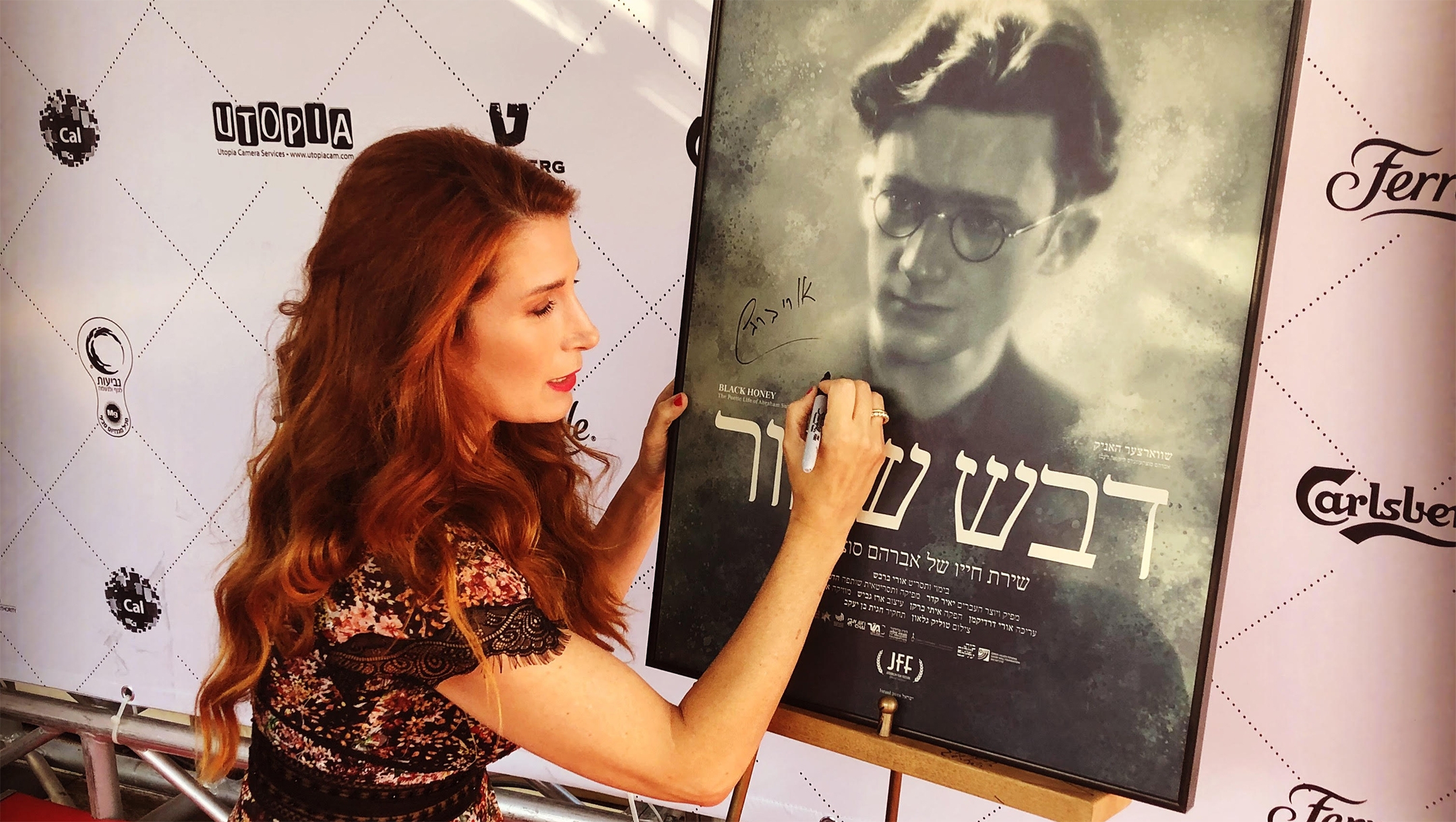 Sutzkever’s accounts from the Vilna Ghetto in Lithuania, which he wrote and dated in descriptive poems, are among the most unusual and affecting testimonies from that hell on Earth. Only 1 percent of the approximately 40,000 prisoners survived.

One of the poems, “The Teacher Mira,” heartbreakingly chronicles how teacher Mira Bernstein cared for her dwindling flock of charges in the ghetto — orphans whose parents had been murdered. Sutzkever named one of his two daughters Mira for that teacher.

Another poem documents how partisans made weapons from the large lead plates of the Jewish Rom Printing House in Vilnius because “Jewish bravery that lies in words must echo in the world in bullets,” as Sutzkever wrote.

And still another verse recounts how Bruno Kittel, the Nazi SS officer who oversaw the liquidation of the Vilna Ghetto, executed a man while holding a pistol in one hand and playing a piano with the other.

Becoming a ghetto diarist — he began dating his poems and composing a new one nearly every day during his incarceration in 1941 – did not come naturally to Sutzkever. Before the war, his focus on nature’s beauty, as he recalled it from his childhood in Siberia, made him an outsider to Vilnius’ Yiddish literary scene, with its socialist and political themes.

In the ghetto, Sutzkever’s poems turned macabre, particular and personal. The most chilling example is his description of holding the lifeless body of his and Freydke’s first child. Born at the ghetto hospital, the newborn was poisoned immediately after birth at the orders of the Nazis, who forbade births there.

“I wanted to swallow you whole my child / when I felt your little body cooling between my fingers / like a warm cup of tea,” he wrote.

Sutzkever’s mother also was murdered near the ghetto, and he wrote about that, too. His father had died in Siberia when he was 7, forcing the family to move to Vilnius.

In what seems like a trauma-induced delusion, Sutzkever said he believed that producing excellent poetry would make him indestructible to the Nazis. This could explain his extraordinary willingness to risk his own life.

As a writer in the ghetto, he was tasked in 1943 with sorting and cataloging select Jewish writings that the Nazis wanted to preserve for their archives about their annihilation of European Jewry. But Sutzkever and a handful of other members of the “paper brigade” risked their lives to smuggle and stash hundreds of priceless writings that are in Israel today thanks to their actions.

In 1943, Sutzkever and his wife escaped the ghetto.

During the escape, a German sentry spotted Sutzkever after curfew, the poet recalled. Instead of running or begging for his life, he walked up to the German and told him, “I’m glad I met you. Do you know where I can go, where there are no Germans?” The sentry allowed him to escape, and a non-Jewish woman hid him in her potato cellar until he joined the partisans, Sutzkever said.

From the partisans, his poems and some rescued documents reached Moscow, providing early and chilling evidence of what was happening to the Jews of Lithuania. The texts reached key individuals in Moscow’s wartime literary scene, including the Jewish writer Ilya Ehrenburg, who was one of the few intellectuals that Stalin trusted.

“Part of the time, I walked in anapests, some of the time I walked in amphibrachs,” Sutzkever told his friend and translator Dory Manor, referring to lines of poetic meter. With Freydke walking in his footprints, “I immersed myself within a rhythm of melody and to that rhythm we walked a kilometer through a mine field and came out on the other side,” Sutzkever later wrote. 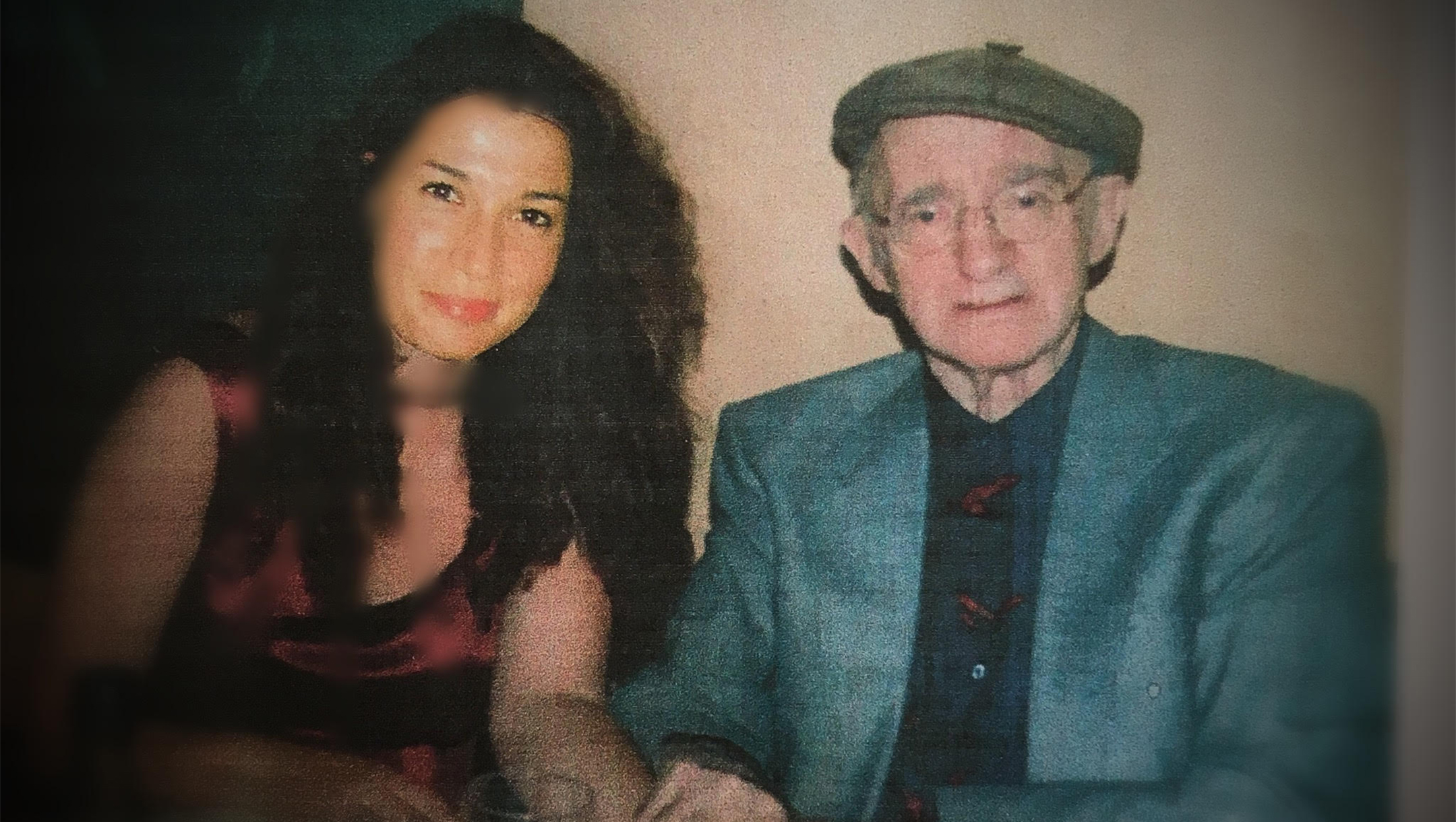 Sutzkever with his granddaughter Hadas in Tel Aviv, 2008. (Courtesy of Hadas Kalderon-Sutzkever)

He was carrying a suitcase made of metal salvaged from the wings of the first rescue airplane. It contained historical documents, including a program of a concert of the Vilna Ghetto Philharmonic orchestra. (Nearly all its players had been murdered already by the time Sutzkever brought the brochure to Moscow.)

Two years after his extraction, which was featured on the front page of the Communist Party daily Pravda, Sutzkever testified at the Nuremberg trials in Germany. He wanted to deliver his testimony in Yiddish, but Soviet authorities forced him to do it in Russian.

In 1947, the Soviets allowed Sutzkever to emigrate. New York, where he would have expected a warm embrace from that city’s Yiddish literary scene, would have been the obvious choice. Instead, the Sutzkevers chose war-torn, prestate Israel, where Yiddish was marginalized by a government that reviled it as an ugly consequence of living in the Diaspora.

Nevertheless, Sutzkever established a highly regarded Yiddish-language weekly in Israel, Di Goldene Keyt (“The Golden Chain”), which remained active for 46 years until its closure in 1995.

In Israel, Sutzkever was recognized early on as one of the Yiddish language’s great poets — Dan Miron, the Yiddish scholar and literary critic, has crowned him “the king of Yiddish prose in the second half of the 20th century.” But at his death at the age of 96, Sutzkever remained largely unknown to consumers of mainstream literature in Israel despite having won the country’s highest literary distinction, the Israel Prize, in 1985.

Sutzkever’s refusal to have a documentary made about him during his lifetime was typical of his humility, which to some degree ensured his relative anonymity, said Chaim Chesler, co-founder of the Limmud FSU cultural organization. In May, Limmud FSU screened “Black Honey” in Minsk, Belarus, the first time it was shown in the former Soviet Union. (The film’s next U.S. screening is scheduled for Sept. 15 at the Sabes JCC Camp Olami in Minneapolis.) 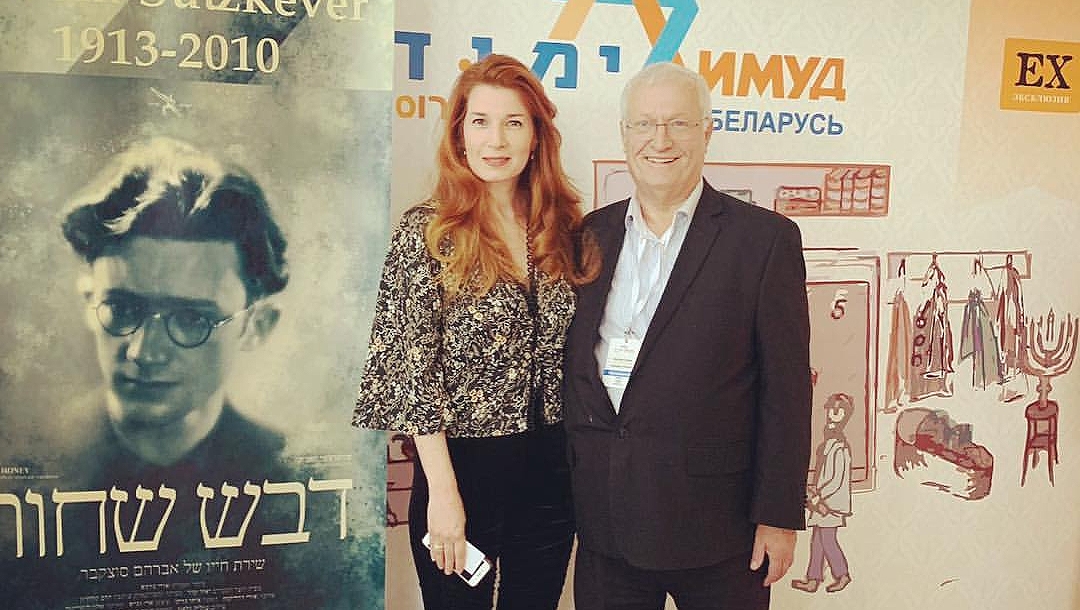 Kalderon-Sutzkever and Limmud FSU founder Chaim Chesler attend the Belarus premiere of a film about Abraham Sutzkever in Minsk, May 3, 2019. (Courtesy of Limmud FSU)

Sutzkever didn’t lose his voice in his new country, and he composed one of the longest and most complex poems ever written about Israel’s War of Independence, “Spiritual Earth.”

All of a sudden, “he was able to renew himself and Yiddish poetry with unprecedented material,” said Benny Mer, a writer and Yiddish translator.