He posed as a righteous Jewish convert for 19 years. Then he wrote a 2,000-page anti-Semitic screed. 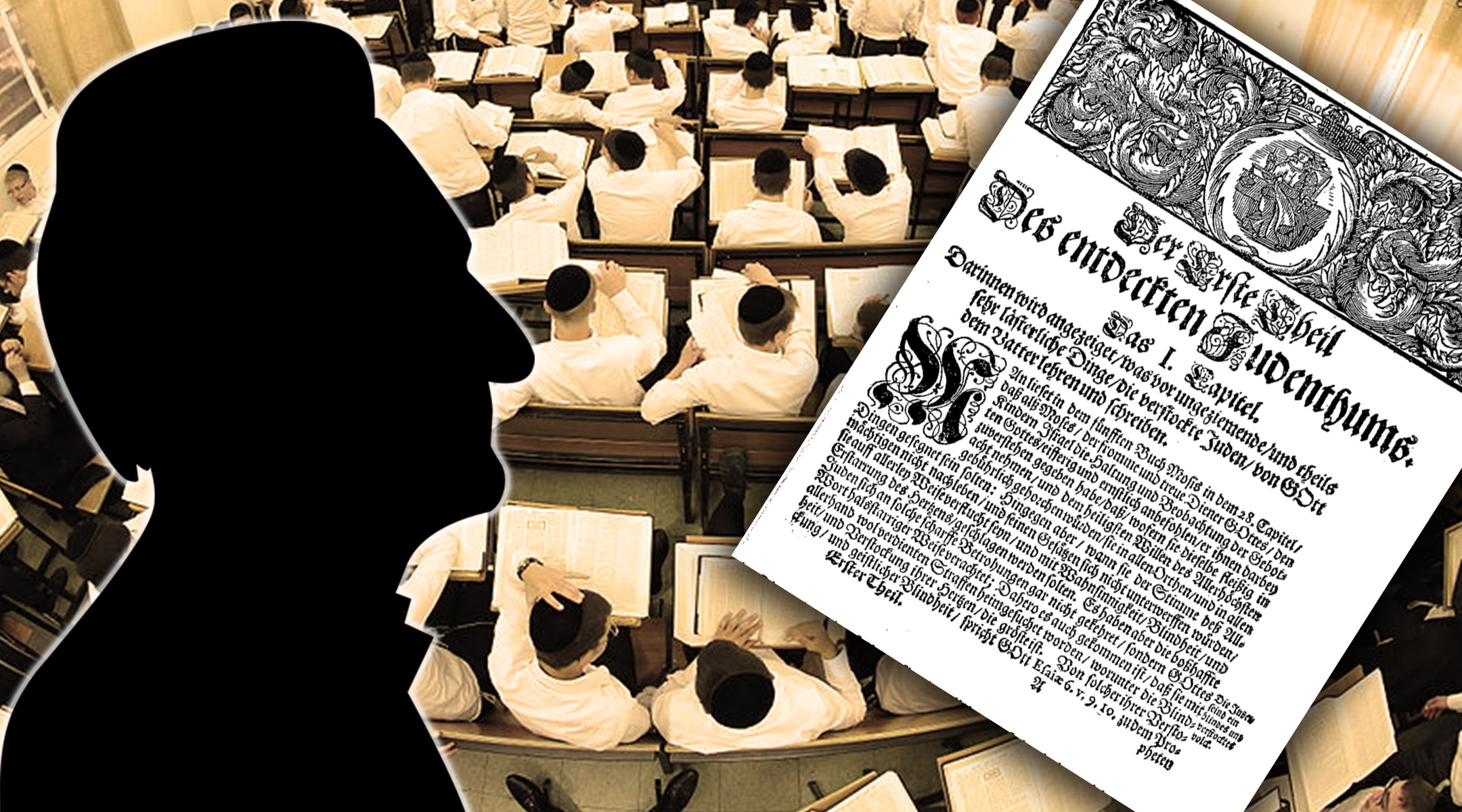 NEW YORK (JTA) — “Eisenmenger belonged to the class of insects which sucks poison even out of flowers,” the 19th-century Jewish historian Heinrich Graetz wrote.

Graetz was referring to Johann Andreas Eisenmenger, a young 17th-century scholar from Mannheim, Germany, who dedicated some 19 years of his life to mastering the Talmud and presenting himself to the Jewish community as a prospective “ger tzedek,” or righteous convert. He learned Hebrew, Aramaic and even Arabic during his intellectual journey, and read the whole Talmud roughly three times.

And then, in 1700, Eisenmenger published “Judaism Unmasked,” one of the most noxious and highly influential anti-Semitic works ever written.

During the Nine Days leading up to Tisha b’Av, during which Jews commemorate the saddest moments in Jewish history from the destruction of the Temples in Jerusalem to the deportation of the Jews of Warsaw, we again have witnessed Eisenmenger’s contemporary descendants: gunmen who publish paranoid, hateful “manifestos” before embarking on horrific acts of  random violence. Those specifically targeting Jews, such as the shooters in Poway and Pittsburgh, often rely, consciously or otherwise, on the work of Johann Andreas Eisenmenger.

Spanning 2,000 pages over two brick-like volumes, “Entdecktes Judenthums” is an exhaustive survey of every possible passage from the Talmud that could be distorted to reflect badly on Jews and Judaism.

His verbose subtitle thoroughly described his intent, which was to prove how “the stubborn Jews frightfully blaspheme and dishonor the Holy Trinity … and despise and curse to the uttermost extreme the whole of Christianity.” He also promised “ridiculous and amusing stories” to boot, “written for the honest information of all Christians.”

Eisenmenger’s purpose and even methodology were hardly new. Jew-haters have been mining the Talmud for talking points since the 13th century, when the apostate Nicholas Donin first denounced it before Pope Innocent III. Few, however, were able to penetrate the depths of this massive, ancient text written in a mixture of highly coded Aramaic and Hebrew.

But Eisenmenger was different. A man of considerable academic skills (he ultimately taught at the University of Heidelberg), Eisenmenger realized that the only way to seriously understand the Talmud was to become immersed in the world of the yeshiva, a world closed to non-Jews by custom and even Jewish law. To achieve his dark purpose, Eisenmenger had to present himself as a genuine spiritual seeker, perhaps modeling himself as a righteous convert like Onkelos, whose translation of the Torah into Aramaic enjoys primacy over even Rashi, or Bodo-Elazar, who ignored the anti-Semitic environment of medieval Europe to adopt the ancient faith.

Eisenmenger began his lifelong deception in 1680 at the age of 24. By the time he was ready to bring his malicious book to print, Eisenmenger could count many rabbis among his teachers, including the prolific David ben Aryeh Lieb of Lida, Lithuania — then chief Ashkenazi rabbi of Amsterdam.

News of Eisenmenger’s colossal betrayal leaked out before “Judaism Unmasked” was released. The Jewish community rapidly mobilized to prevent its distribution, persuading Emperor Leopold I that its publication might ignite the popular violence that had plagued the region in 1699. Eisenmenger protested and a lengthy court battle ensued. The Jewish community offered 12,000 florins (roughly $5,000) to cover his costs if he would withdraw publication. Surprisingly, Eisenmenger seemed agreeable, but demanded 30,000. Negotiations were cut short by Eisenmenger’s sudden death in 1704, at age 50, of a stroke.

King Friedrich Wilhelm I of nearby Prussia circumvented the emperor by printing a second edition of 3,000 copies in 1711 in Berlin (although the title page listed “Koenigsburg” as the place of publication to reinforce that it was published outside the jurisdiction of Leopold I). For the past three centuries, from Stehelin’s English translation to the ugliest parts of the web, anti-Semites have relied on Eisenmenger’s distorted research to promote hatred.

Despite his incredibly profound impact on 300 years of anti-Semitic ideology, a shroud of scholarly silence descended over the man. With the exception of the great professor Jacob Katz’s exhaustive analysis of Eisenmenger’s methodology (Eisenmenger strove for accuracy in citation and translation, but criminally distorted the meaning of the passages in context with unacceptably tendentious commentary to promote awful lies like the infamous blood libel), the most extensive biography available is an impressive but brief study posted to Wikipedia by a 12th-grader in Braunschweig, Germany.

As a historian of the Jewish people, writing during the Nine Days, I find myself awed by Eisenmenger’s pathological achievement for two reasons. First, whatever we think about this sick individual, he devoted himself to an overwhelming tour de force of twisted scholarship: nearly 20 years of solitary toil, exhaustively infiltrating an alien community in order to produce such a massive publication.

Second, like Graetz, it is hard not to reflect on how Eisenmenger was “able to suck poison even out of flowers,” twisting and distorting the Talmud in such a hateful manner. Such, I suppose, is the power of Amalek, the ancient, eternal enemy of the Jewish people.