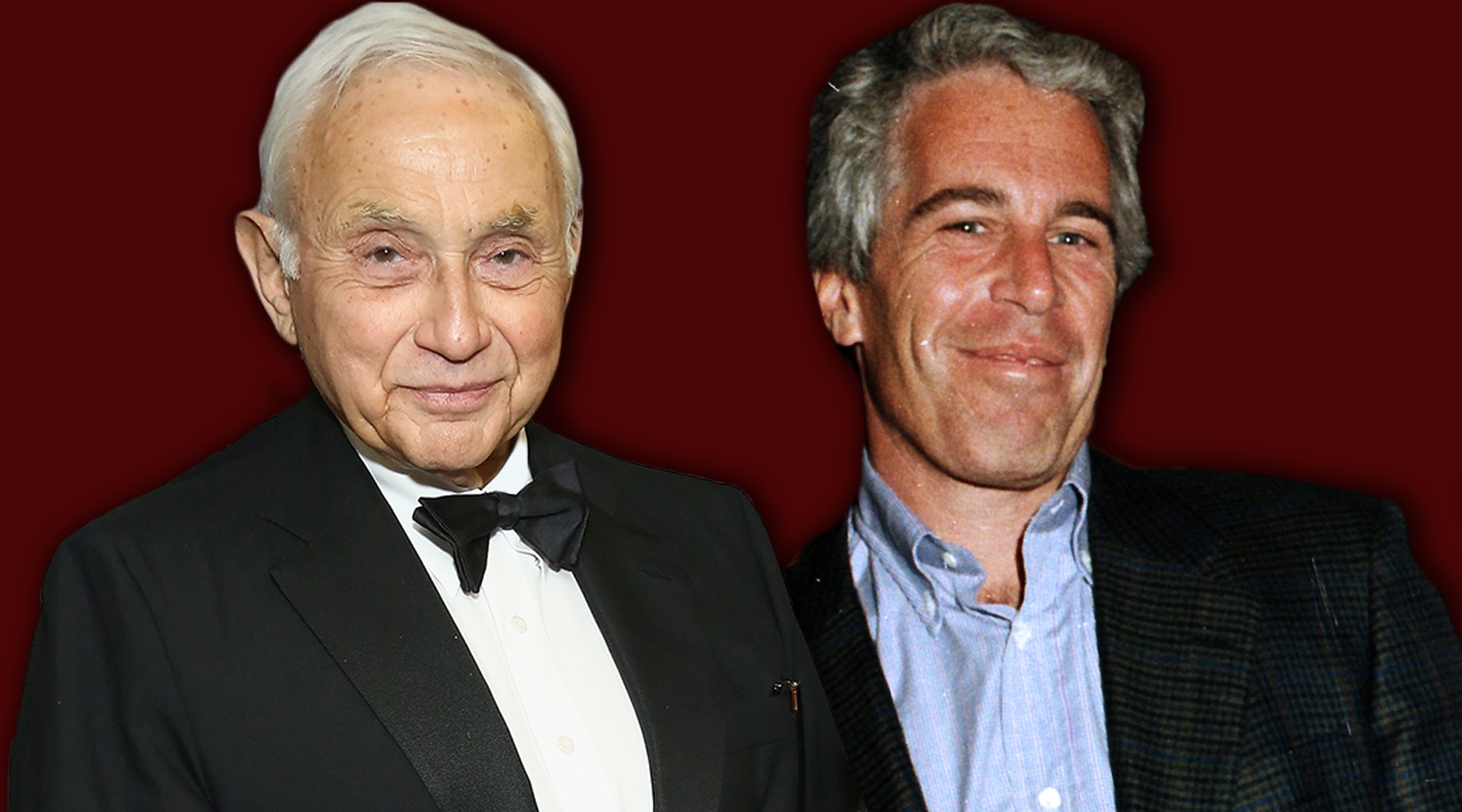 (JTA) — One of the most befuddling questions surrounding the Jeffrey Epstein saga is why Leslie Wexner, a billionaire entrepreneur, entrusted all of his money to Epstein, a secretive financier with no college degree.

For those immersed in the Jewish world, there’s an added question: How did Wexner — a prominent philanthropist seen as a champion of Jewish learning and ethical teaching, whose foundation has trained waves of rabbis, Jewish professionals and volunteer board leaders — end up so enmeshed and enamored with a future convicted sex offender and alleged sex trafficker?

Is Wexner connected to the sex abuse accusations against Epstein? Has the philanthropist been accused of any wrongdoing? Does any of this taint Wexner’s legacy or the beneficiaries of his many programs?

Since the Epstein sex scandal resurfaced this year, these questions have dogged Wexner, the owner of Victoria’s Secret who at one point was Epstein’s only known financial client. Wexner was very close with Epstein and trusted him as a money manager and legal representative.

Epstein, who served a year in prison and registered as a sex offender more than a decade ago, was arrested recently and charged with sex trafficking. He was found hanged in his jail cell on Saturday in what officials are calling a suicide.

As the scandal has unfolded, Wexner and his associates have put out a series of statements on Epstein and their relationship. His connection with Epstein has also led to stormy discussions among the recipients of his largesse about the ethical dilemmas they face.

Here’s a primer on how the two became so close, and why their relationship poses a dilemma for many in the Jewish community.

Who is Leslie Wexner?

He’s an 81-year-old Jewish billionaire who lives in the Columbus, Ohio, area. Wexner made his fortune by founding The Limited, a women’s clothing brand, in 1963.

Wexner has since expanded his apparel empire to include other brands, like Bath & Body Works, Pink and, most notably, Victoria’s Secret, a once-obscure lingerie store that he turned into an empire. It’s all now under the umbrella of his company, L Brands. He is the longest-running CEO of a Fortune 500 company.

He also ventured into real estate, developing the posh community of New Albany, Ohio, where Wexner lives in a 60,000-square-foot mansion. According to Forbes, he’s worth $4.6 billion.

How much has he given to Jewish causes?

Plenty. The Wexner Foundation is among the most prominent private Jewish charities in the world. In 2017, according to tax documents, it gave $3.6 million in charity, much (but not all) of it to Jewish educational causes, as well as more money for educational programs.

The foundation is best known in the Jewish world for its graduate fellowship, which awards scholarships to 20 promising graduate students in Jewish fields, including rabbinical school, cantorial school, Jewish educational school or another degree program. More than 1,800 people have participated in its program aimed at providing volunteer board leadership with lessons in Jewish history, thought, texts and contemporary issues. The foundation runs a variety of other programs, including training for Israeli public officials.

What does all of this have to do with Jeffrey Epstein?

Nothing, and everything. For decades, if Wexner spent any money, Epstein was likely connected to it somehow. Epstein, a former prep school teacher, had entered the finance world and gained a reputation as an astute money manager for the super-wealthy. He met Wexner in the 1980s, and the two forged a close relationship. Epstein eventually received power of attorney over Wexner’s finances.

In a statement last week distributed by his foundation, Wexner wrote that Epstein “had wide latitude to act on my behalf with respect to my personal finances while I focused on building my company and undertaking philanthropic efforts.” In 2003, Wexner told Vanity Fair that Epstein had “excellent judgment and unusually high standards.”

Epstein also was involved with Wexner’s charitable efforts. In 1990, the two helped fund the construction of a new building for the Harvard Hillel. Two years later, after Wexner’s mother fell ill, Epstein replaced her on the Wexner Foundation board.

In his recent statement, Wexner insisted that Epstein “had no executive responsibilities in the running of the Foundation” and “did not work directly with Foundation staff, and he did not engage with leadership initiatives in any way.”

Yes, and their relationship was more than a typical professional one. They were invested together in Wexner’s Ohio real estate development. Epstein lived in Wexner’s New York City townhouse for years, eventually acquiring it, along with acquiring a private plane from Wexner.

Epstein also supervised the construction of Wexner’s yacht, Limitless, and was a frequent guest at Wexner’s Ohio parties, according to The New York Times. The Times also reported that Epstein froze out some of Wexner’s friends and acquaintances from his life.

When Epstein was first investigated in the mid-2000s, for unlawful sex acts with a minor, he denied the allegations. Eventually, however, he accepted a deal under which he pleaded guilty for two counts of solicitation of prostitution — one with a minor. Wexner says he broke off his relationship with Epstein in 2007 and later found out that Epstein had taken a lot of money from him.

“This was, frankly, a tremendous shock, even though it clearly pales in comparison to the unthinkable allegations against him now,” Wexner wrote in his recent message, regarding the financial misappropriation. “I am embarrassed that, like so many others, I was deceived by Mr. Epstein. I know now that my trust in him was grossly misplaced and I deeply regret having ever crossed his path.”

In 2008, Epstein made a $46 million donation to one of Wexner’s charities. Wexner wrote in his letter that “payments Mr. Epstein made to the charitable fund represented a portion of the returned monies” Epstein had misappropriated.

According to CNBC, Wexner has provided documents showing the financial misconduct to federal investigators.

So has anyone implicated Wexner in Epstein’s crimes? And what does this have to do with Alan Dershowitz?

Wexner’s name has been dragged into an ongoing legal battle between Alan Dershowitz and one of Epstein’s accusers, Virginia Roberts Giuffre, and her lawyers.

Dershowitz had his own personal and professional relationship with Epstein. They were close (Dershowitz has said he loved talking with Epstein and would show him drafts of his books) and the high-profile lawyer has helped represent Epstein. Epstein once brought Dershowitz to one of Wexner’s parties — as, Dershowitz says, an “intellectual gift” to Wexner.

Two of Epstein’s alleged victims, including Giuffre, have accused Dershowitz of sexual assault, which he denies. Dershowitz claims that the accusations against him were part of a plot by one of Giuffre’s attorneys, David Boies, to extort money from Wexner.

According to a report in the Miami Herald, another of Giuffre’s lawyers, Stanley Pottinger, submitted an affidavit saying his client said that under Epstein’s direction, she had sex with both Dershowitz and Wexner.

But New York magazine reported that “Boies had three conversations with Wexner’s lawyers in 2015, after which the allegations were quietly dropped.” Boies asserted in an affidavit that “no settlement demand was ever made, or even discussed.”

Some of Epstein’s alleged abuse occurred at the Manhattan townhouse once owned by Wexner, where Epstein lived. Another Epstein accuser, Maria Farmer, said Epstein hired her to work on a mural at Wexner’s home in Ohio in the summer of 1996, and assaulted her there. In an affidavit, she asserted that “Wexner’s security staff refused to let me leave the property” and that she was held against her will for approximately 12 hours.

Farmer said that after returning to New York, she filed a report with the police and the FBI.

Farmer’s affidavit does not suggest Wexner himself was involved with or knew about the incident.

Federal authorities thus far have not implicated Wexner in Epstein’s crimes, according to Bloomberg, but prosecutors are still investigating which if any of Epstein’s business associates were involved with his alleged crimes. In a statement posted in July, Wexner insisted (in all caps) that “I was NEVER aware of the illegal activity charged in the indictment.”

The Wexner Foundation has not given interviews about the scandal and declined to speak to the Jewish Telegraphic Agency about the matter. JTA has asked the foundation specifically about the allegations by Farmer and Giuffre, and also has reached out to Guiffre’s lawyers, including Pottinger, for comment.

According to The Times, Epstein also falsely represented himself as a talent scout for Victoria’s Secret, then used that identity to meet women whom he assaulted.

L Brands’ stock price has dropped as the Epstein scandal has unfolded.

How is the Jewish community reacting?

Beneficiaries of the Wexner fellowship and other programs are grappling with what to do, given the association between their benefactor and a sex offender.

“What do you do when you’ve taken in dirty money but already spent it?” one alumna told The New York Jewish Week. “It’s not clear that you can do more than commit to doing anything but doing better research in the future.”

The debate has played out as well in emails between alumni and faculty of Yeshivat Hadar, a traditional egalitarian yeshiva in New York City where some faculty members and students are former Wexner fellows.

“I would like to propose our community take the lead in dissociating ourselves from Wexner and taking a stand against him being able to buy his way into a good name,” Ike Brooks Fishman, a Hadar alum who was not a Wexner fellow, wrote to the yeshiva listserv, according to copies of emails he posted to his Facebook profile page.

Fishman also posted a response from one of Hadar’s co-founders accusing him of “tarring the faculty of Hadar, many of its current students and those who will enter this fall.”

“I am ashamed that you were once my student,” wrote the co-founder, who told The Jewish Week that the email was shared without prior consent and has since apologized.

Rabbi Aviva Richman, a Hadar faculty member, wrote in a statement to The Jewish Week that Hadar receives no funding from the Wexner Foundation, and that Fishman’s email was an “incredibly destructive misrepresentation” of Hadar’s intentions.

“We are proud to be a community that confronts these concerns directly,” she wrote.

In July, the president of the foundation, Rabbi B. Elka Abrahamson, sent a mass email to those involved with the foundation and its programs expressing disgust with Epstein.

“It runs contrary to every value we believe in and teach, especially the fundamental tenet that all human beings are created in God’s image,” she wrote about the allegations. “This is an individual who utterly twisted and tossed aside that sacred notion. We are sickened by Mr. Epstein’s behavior.”