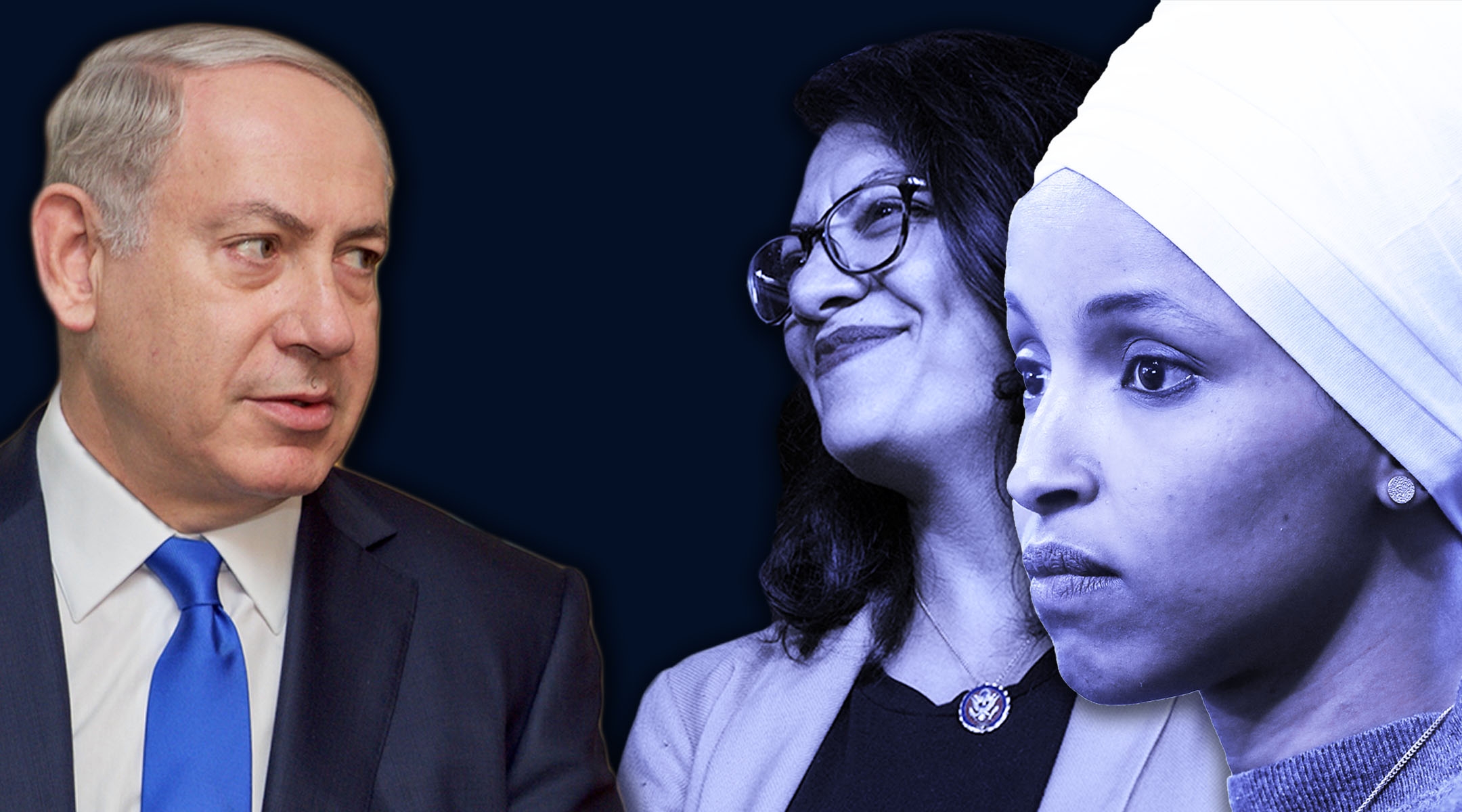 Israeli Prime Minister Benjamin Netanyahu, left, said Reps. Rashida Tlaib, center, and Ilhan Omar, right, provided an itinerary that "revealed that they planned a visit whose sole objective is to strengthen the boycott against us and deny Israel’s legitimacy.” (Laura E. Adkins for JTA/Getty Images)
Advertisement

(JTA) — Israel’s decision on Thursday to ban Reps. Rashida Tlaib and Ilhan Omar from entering the country has quickly prompted a wave of impassioned responses from across the Jewish community.

AIPAC’s statement, along with others from establishment Jewish groups, criticized Omar and Tlaib’s support for the movement to boycott Israel. But like others who have their differences with the two House reps, AIPAC said that Israel should nonetheless allow sitting members of the United States Congress to enter the country and see it for themselves.

“We disagree with Reps. Omar and Tlaib’s support for the anti-Israel and anti-peace BDS movement, along with Rep. Tlaib’s calls for a one-state solution,” the organization tweeted, referring to the boycott Israel movement. “We also believe every member of Congress should be able to visit and experience our democratic ally Israel firsthand.”

Israel announced on Thursday that the Muslim congresswomen, both Democrats, would not be allowed to visit ahead of a planned trip this Sunday. Israel’s ambassador to the U.S., Ron Dermer, had previously said Israel would not bar any members of Congress.

But Israel’s decision came shortly after President Donald Trump wrote on Twitter that Israel “would show great weakness” if it let in the two congresswomen.

Prime Minister Benjamin Netanyahu blamed the decision on Tlaib and Omar, saying he received their itinerary a few days ago and that it “revealed that they planned a visit whose sole objective is to strengthen the boycott against us and deny Israel’s legitimacy.” The itinerary said the destination was listed as Palestine and included no visit with any Israeli officials, he said.

Tlaib, D-Mich, and Omar, D-Minn., are supporters of the Boycott, Divestment and Sanctions movement targeting Israel. Under Israeli law, BDS supporters can be prevented from entering the country. They have also at times invoked what critics call anti-Semitic tropes in criticizing the Jewish state.

Here are reactions from other Jewish groups, the United States Embassy in Israel and prominent lawmakers. JTA has asked several Republican lawmakers for comment, including Reps. Lee Zeldin of New York and David Kustoff of Tennessee, as well as House Minority Leader Kevin McCarthy, R-Calif.

The Republican Jewish Coalition threw its support behind Israel’s decision, noting that the country recently welcomed a congressional delegation of 70 lawmakers from both parties. The RJC said Netanyahu welcoming that delegation shows that this decision “has nothing to do with American partisan politics.”

Zionist Organization of America praised the ban in a statement from its president, Morton Klein, and chairman, Mark Levenson. The pair said that the congresswomen “should not be given the opportunity to further delegitimize and harm all of us.”

U.S. Ambassador to Israel David Friedman wrote on Twitter that he supports the decision, saying that the lawmakers’ trip itinerary showed the visit “is nothing more than an effort to fuel the BDS engine.”

Rep. Lee Zeldin, R-N.Y., criticized the congresswomen’s Israel policies in a statement, saying “It shouldn’t be shocking they are unwelcome in a nation they are taking great pains to tear down.”

THOSE WHO DISLIKE THE DECISION

The Jewish Federations of North America said in a statement that “every member of Congress, without exception, should be allowed to visit Israel, irrespective of whether we agree with their point of view.”

The Simon Wiesenthal Center‘s associate dean and director of global social action slammed Tlaib and Omar., calling them ” unapologetic anti-Semites.” But Rabbi Abraham Cooper also added in a statement that “the first instinct of Israeli officials to let them into the country was [the] right one.”

The American Jewish Committee‘s CEO, David Harris, wrote on Twitter that “Israel faced a tough choice,” but that it “should’ve taken the high road & let these Members of Congress in, no matter how vile their views.”

The Anti-Defamation League likewise said that “while we absolutely disagree with the pro-BDS positions of Reps. [Omar and Tlaib], keeping them out is counterproductive.”

The executive director of the Jewish Democratic Council of America, Halie Soifer, said in a statement that banning lawmakers ” is counterproductive and plays into President Trump’s goal of politicizing support for Israel.”

Israel Policy Forum said the ban “can only serve to harden [Tlaib and Omar’s] current views, along with delivering an insult to the U.S. Congress.”

Rep. Steny Hoyer, the Maryland Democrat serving as House Majority Leader, called the decision “a grave mistake.” He said in a statement that he had been working since yesterday to convince Israel to let in the congresswomen, including by speaking with Netanyahu and  Dermer.

Sen. Marco Rubio, R-Fla., criticized the decision, writing on Twitter that while he disagrees with Tlaib and Onmar, “denying them entry into #Israel is a mistake. Being blocked is what they really hoped for all along in order to bolster their attacks against the Jewish state.”

Sen. Charles Schumer, D-N.Y., said in a statement that the move “is a sign of weakness, not strength” that “will only hurt the U.S.-Israeli relationship and support for Israel in America.”

In a statement, the co-chair and CEO of the Democratic Majority for Israel, said Israel’s decision was “both wrong and unwise.”

J Street decried the decision in a statement, saying Trump’s tweet urging Israel to ban the members “illustrates that this decision is motivated purely by politics and ideology.”

Dan Shapiro, who served as ambassador to Israel under President Barack Obama, criticized Israel’s about-face and wrote on Twitter that there would be “zero harm in letting them come learn, see (even if they had an agenda). Reversal harms Israel’s standing in US, boosts BDS.”

Sen. Bernie Sanders, I-Vt., called on Netanyahu to reverse the decision. He tweeted that barring Tlaib and Omar “is a sign of enormous disrespect to these elected leaders, to the United States Congress, and to the principles of democracy.”

On Twitter, Sen. Elizabeth Warren, D-Mass., called banning the congresswomen “a shameful, unprecedented move” and urged the Jewish state to allow Tlaib and Omar to enter.

Rep. Nancy Pelosi, the California Democrat and Speaker of the House, said in a statement that “Israel’s denial of entry to Congresswomen Tlaib and Omar is a sign of weakness, and beneath the dignity of the great State of Israel.”

Rep. Jerry Nadler, D-N.Y., said in a tweet the decision “undermines the ability for our two allied countries to have the frank, open and, at times, difficult discussions that we must have in order to ensure Israel remains a secure and democratic nation.”

Rep. Nita Lowey, D-N.Y., said she was “saddened” by the decision and urged Israel to reconsider in a tweet.

Rep. Ted Deutch, D-Fla., said he was “extremely disappointed” by the move.