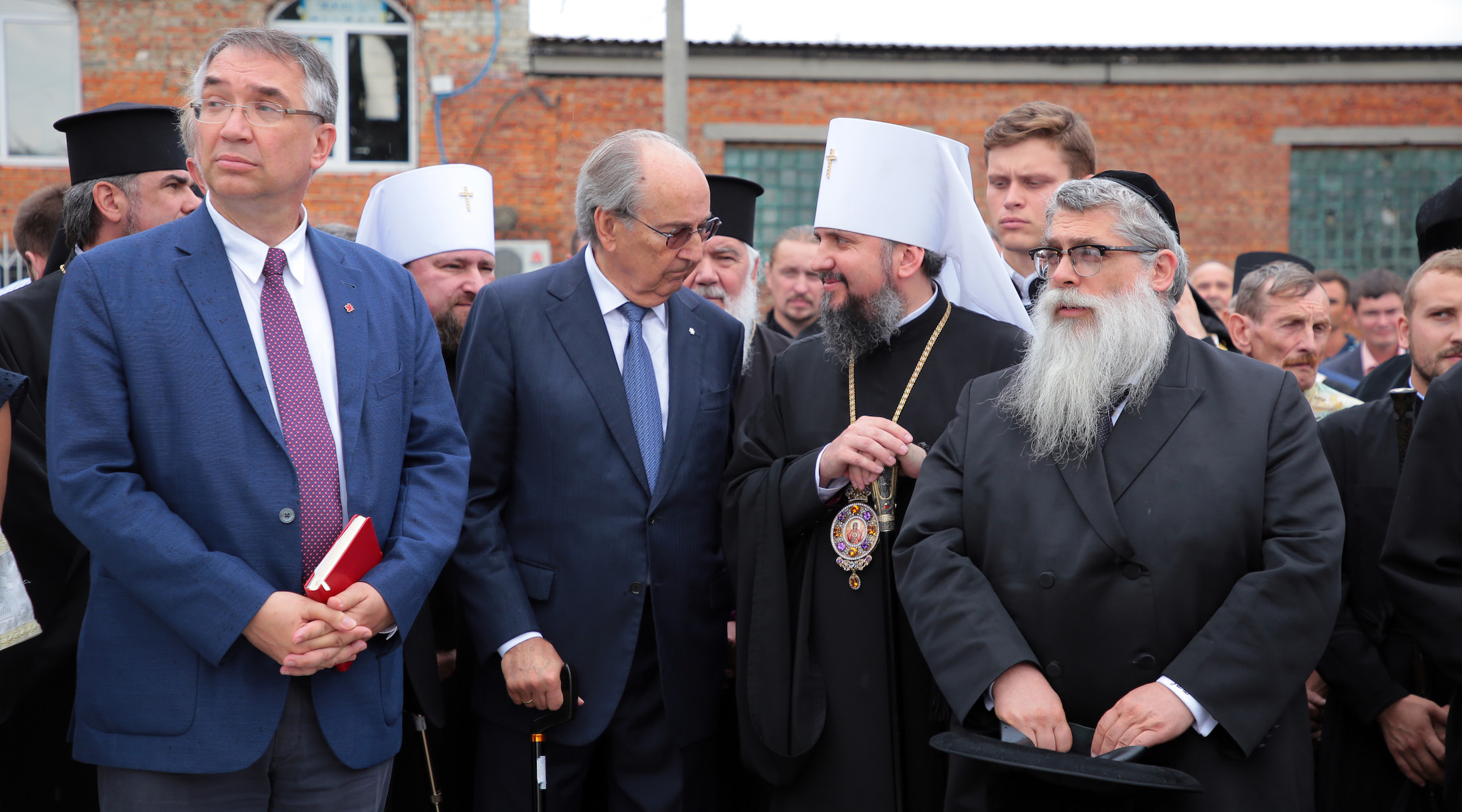 (JTA) — One side called it a fitting compromise. The other said it was a whitewash of Ukraine’s role in the Holocaust.

The chief rabbi of Ukraine and other religious leaders helped inaugurate a monument to members of an ultranationalist movement whose followers collaborated with the Nazis.

Rabbi Yaakov Dov Bleich took part in the Aug. 21 ceremony commemorating members of the Organization of Ukrainian Nationalists, or OUN, and its militant offshoot, the Ukrainian Insurgent Army, or UPA, on the edge of a Jewish cemetery in the town of Sambir. According to Holocaust historians, the two groups were responsible collectively for the deaths of thousands of Jews and up to 100,000 Poles during World War II.

Sambir, in western Ukraine, was the site of a 1941 pogrom, a precursor to the local Jewish population’s eventual annihilation that some historians have linked to the OUN.

Bleich said the ceremony was part of a compromise meant to finally give the town’s Jews peace. He said that following extensive negotiations between Jewish activists and local residents, both sides agreed that large crosses erected in 2000 at the cemetery would be removed if the OUN monument was erected on the edge of the cemetery where no Jewish graves are to be found.

“The question is what is our goal here? Not to memorialize the Ukrainians but to get the crosses down and get a fitting memorial to the Jews who were killed,” Bleich told JTA. “Basically what you are talking about is emotions on the sides of the families that don’t want crosses on their relatives’ graves, and for that they are willing to compromise.”

“These souls have no rest as long as these crosses are there,” he added.

Bleich’s critics have accused him of succumbing to efforts to whitewash the OUN’s checkered legacy.

“I’m practically speechless,” Efraim Zuroff of the Simon Wiesenthal Center said. “It’s incomprehensible how a rabbi would participate in such a ceremony. This is clearly a whitewash of the horrible crimes committed against Jews in Sambir and only reinforces the highly problematic tendency in Ukraine to hide Holocaust crimes committed by Ukrainians.”

It was indeed a very special and moving ceremony. I must mention that in my personal opinion this historic day was only possible in a Democratic #Ukraine "Democracy forces society to respect other opinions and trains people in tolerance and respect of differences" https://t.co/fInJqD5geu

In 1941, immediately after the Germans entered Sambir, 50 to 100 Jews were killed in a pogrom carried out by Ukrainians. Nearly all of the town’s more than 6,000 Jewish residents would eventually be murdered by the Nazis, including the remaining 1,200 in 1943. The bodies of those final victims were dumped in a mass grave in the cemetery.

According to Yad Vashem, Israel’s Holocaust authority, the OUN fought with the German army against Soviet troops. After the group was disbanded under Nazi occupation, its members continued to collaborate with the Nazis.

During the subsequent decades of communist rule, Sambir was empty of Jews. However, in 2000, a Canadian-Jewish philanthropist erected a stone monument there in memory of its Jewish Holocaust victims. Residents tore down the monument and put up three 30-foot-tall wooden crosses in its place.

The locals say the crosses honor 17 teenage members of the OUN who were shot by the Nazis in 1944 and buried in the Jewish cemetery. And while Bleich admits that the story is “hearsay,” he also said it has been “partially verified” and that the deal to establish a monument to the OUN was a worthwhile one.

Swedish historian Per Rudling, an expert on the OUN, found the Ukrainian narrative “dubious,” saying that while the OUN and the Nazis had turned on each other, they had resumed collaboration by August 1944.

“It’s the usual story,” Rudling said. “They try to appropriate the Jewish suffering.

“What they have done in the past is to put up crucifixes and monuments at Jewish mass graves. They have done this in a number of localities across western Ukraine. They put one up in Babi Yar, thus appropriating Babi Yar and making it a shrine to Ukrainian nationalist suffering.”

Babi Yar is a site near Kiev where about 33,000 Jews were murdered by German soldiers in September 1941.

While Bleich said that the OUN members being memorialized in Sambir were teenagers who were not involved in the murder of Jews, Rudling responded by noting that the OUN as an organization had been heavily involved in killing Jews.

“Putting an OUN cross at the site where Jews were killed in a pogrom is much worse than the crosses,” he said.

Grzegorz Rossolinski-Liebe, another OUN specialist, agreed. He told JTA that “the general trend is to make the OUN and UPA a part of the Ukrainian national history which the Jews in Ukraine should accept.”

“This works only if both groups [Jews and Ukrainians] forget the participation of the OUN and UPA in the Holocaust and remember the Ukrainian nationalists as victims of the Nazis,” he said.

Bleich, however, had a different take, saying that while he found the OUN to be illegitimate, “when you are dealing with emotions of the Jews whose relatives are buried there, you have to come up with some sort of compromise that will work. Nobody is happy, but we accomplished the big goal, which is let these people rest in peace.”

In the meantime, only one of the crosses has been removed, despite the agreement. Bleich said he is confident that the local Ukrainians will soon fulfill their end of the agreement and it will serve as a precedent that will “get them to remove the crosses” from other Jewish cemeteries as well.