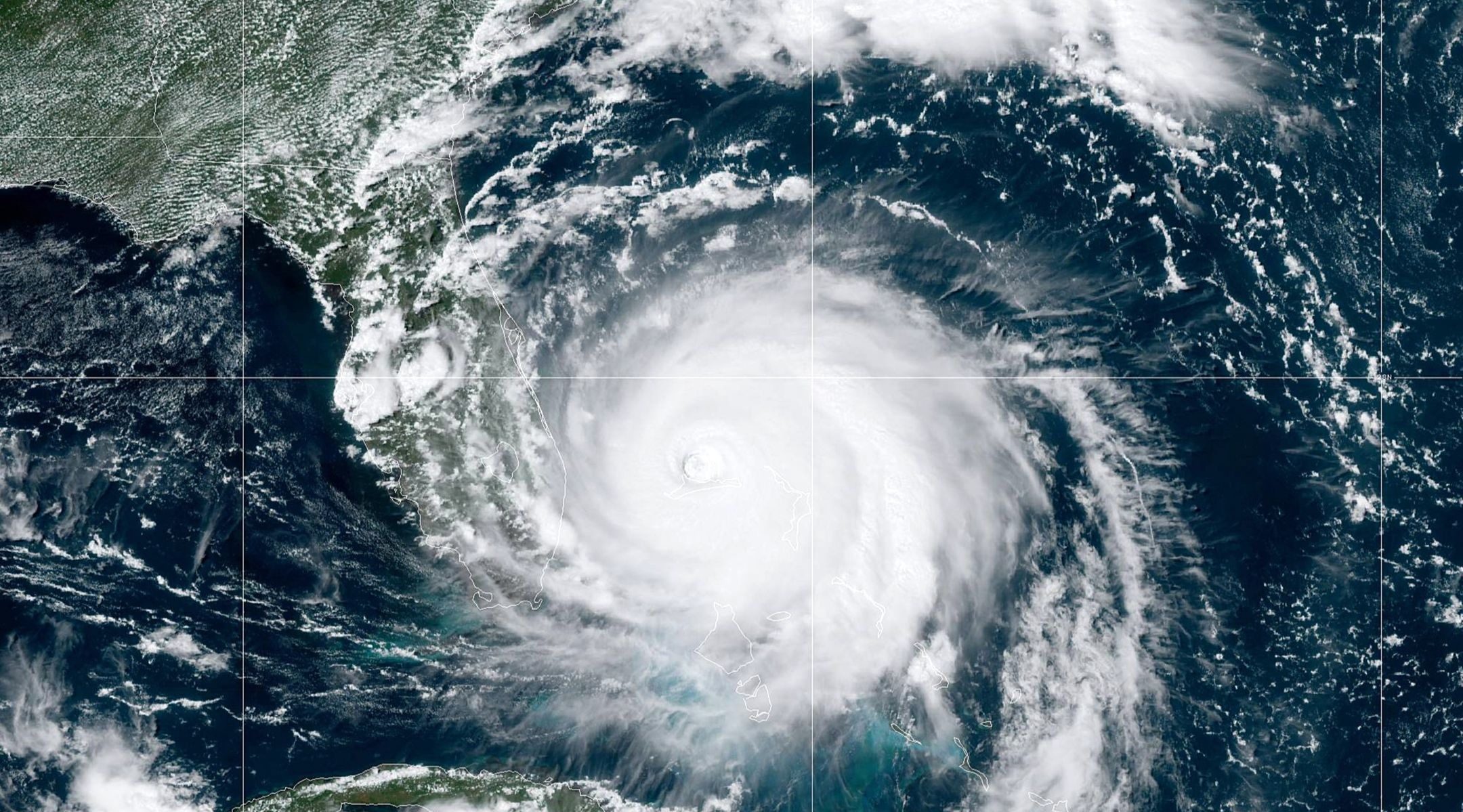 Hurricane Dorian moves past grand Bahama Island in the Atlantic Ocean on its way toward the Florida coast in this image from the National Oceanic and Atmospheric Administration, Sept. 2, 2019. (NOAA via Getty Images)
Advertisement

(JTA) — As Hurricane Dorian was slowly making its way toward the Florida coast, Jewish agencies in the state were preparing for a storm that had weakened severely since wreaking havoc on the Bahamas.

It is not known exactly where and when the hurricane will make landfall. Dorian was downgraded to a Category 2 storm on Tuesday with top sustained winds of 120 mph. It had started as a Category 5, the most powerful hurricane, with winds up to 200 mph.

The Jewish Federation of Palm Beach County announced Sunday that its offices, as well as partners the Alpert Jewish Family Service, Mandel JCC, Boynton Beach, Mandel JCC Palm Beach Gardens and Meyer Preparatory, are closed through Tuesday in anticipation of the hurricane’s effects.

The federation said in a statement posted on Facebook and updated Monday that it is in “constant contact” with local Jewish agencies, community partners and synagogues, as well as local government and emergency officials, to prepare for the storm and mobilize service to the community as needed.

The storm was lowered from a Category 5 storm to a Category 4 on Monday. However, the National Hurricane Center issued hurricane, storm surge and tropical storm watches and warnings from the Atlantic coast of Florida northward into Georgia. Evacuations were ordered for parts of Florida, Georgia and South Carolina.

“Although it remains uncertain just how close the eye of Dorian will get to the Florida east coast, the threat of damaging winds and life-threatening storm surge remains high,” the National Weather Service office in Melbourne, Florida, said Monday morning. “There will be considerable impacts and damage to coastal areas, with at least some effects felt inland as well.”

Millions are under evacuation orders up and down the East Coast.

Effects of the hurricane will be felt on the coast in Georgia and both North and South Carolina in the middle and end of the week.

The storm caused what has been described as “catastrophic damage” in the Bahamas. At least five people have died and 21 injured so far, including a 7-year-old boy. Bahaman Prime Minister Hubert Minnis called the devastation from the hurricane “unprecedented and extensive.”

The Jacksonville, Florida Jewish Center announced on its website that it would be closed on Tuesday and Wednesday for all programs, including religious school. It provided resources for storm preparation and for tracking the storm, as well as a number of prayers one can say with the approach of a devastating storm.

The Israeli nongovernmental organization IsraAID said Friday that it was planning to send an emergency team as Dorian headed for Florida’s east coast.

“Our teams are monitoring the situation and preparing to send an emergency response team if needed,” IsraAID said. “We have extensive recent experience in Florida and the wider region.”

Meanwhile, Chabad houses along Florida’s east coast have been preparing for the storm for several days, including boarding up the buildings, purchasing food and making arrangements for the protection of their Torah scrolls.

Chabad emissaries Rabbi Berl and Chanie Goldman, and Rabbi Aharon Chaim and Pessie Notik in a statement called on the Jewish community and the general public to “stay informed, take this seriously and be prepared.” They ended their message by offering to make contact with anyone who lives alone and to bring them to Chabad for food, shelter, and companionship during the storm. NO ONE should be alone during a hurricane or tropical storm.”