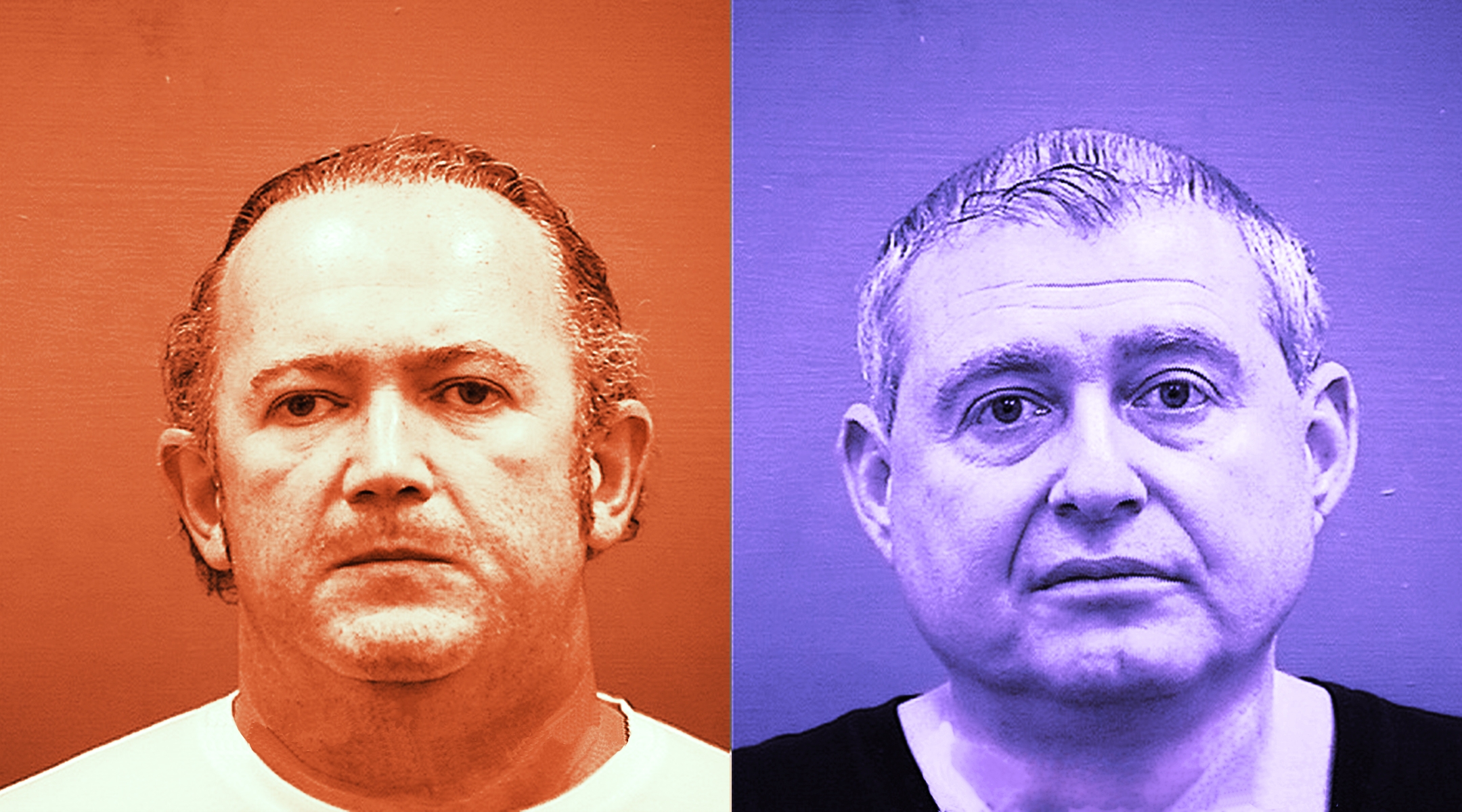 Igor Fruman, left, and Lev Parnas are Ukrainian-American businessmen who have been accused of campaign finance violations related to the Trump-Ukraine scandal. (Getty Images/JTA Montage)
Advertisement

Six months earlier they had been honored at the gala dinner of the National Council of Young Israel, a prominent Orthodox synagogue association. The man who invited them, Joseph Frager, had met Fruman and Parnas at a fundraiser for President Donald Trump in June 2018 and said he had no idea that they were allegedly breaking campaign law.

“It sounded like they were wealthy, and I didn’t know all this matter that came out afterward,” Frager, Young Israel’s first vice president, told the Jewish Telegraphic Agency on Thursday. “I didn’t know about it at the time. It is shocking.”

Fruman and Parnas have been charged with trying to funnel foreign money to candidates in federal and state elections, according to a newly unsealed indictment. Their alleged goal was to persuade a congressman to get the U.S. ambassador to Ukraine removed from her post because she was frustrating efforts led by Trump and his allies to investigate former Vice President Joe Biden, a leading contender to challenge Trump in next year’s election. Separately, they allegedly hoped to gain support for a marijuana business they hoped to open in Nevada.

They also have allegedly helped Rudy Giuliani, the former New York City mayor and current lawyer for Trump, coax Ukrainian officials to investigate Biden and his son, Hunter. Giuliani was not named in the indictment, according to The Washington Post. Democrats in the House of Representatives subpoenaed Fruman and Parnas on Thursday as part of their impeachment inquiry into Trump’s dealings with Ukraine.

But before they ended up in handcuffs at Dulles International Airport, they were among the guests of honor at Young Israel’s annual gala on March 31 at the Marriott Marquis in Midtown Manhattan. The gala was centered on supporting Trump and Israeli West Bank settlements, and the keynote speakers were Republicans, among them House Minority Leader Kevin McCarthy and former Arkansas governor Mike Huckabee. Giuliani attended as well.

Young Israel, which has more than 100 member congregations in North America, has sparked controversy among its affiliate synagogues for its outspoken advocacy of right-wing causes. Earlier this year, the group was the first American Jewish organization to support Israeli Prime Minister Benjamin Netanyahu’s brokering a deal with an extremist right-wing political party. A Young Israel staff member gave a benediction at this year’s Conservative Political Action Conference.

Following the statement on Netanyahu’s deal, nearly two dozen Young Israel synagogues signed a statement in protest and asked the national group to refrain from commenting on political issues. One of those congregations later left the Young Israel movement.

Frager said he met Parnas and Fruman, who are Trump donors, at a pro-Trump America First Action SuperPAC event in Washington, D.C., in June 2018. Frager said the two men saw his yarmulke and approached him, and he convinced them to join a trip he was running to Israel and the West Bank that also included former Trump Communications Director Anthony Scaramucci, who was honored by Young Israel in 2018.

“They loved Israel,” Frager said. “I was trying to motivate them, further cultivate a relationship with them that would ultimately lead to them helping a lot of causes I’m involved in, in Israel.”

In November, Frager hosted the two men and Giuliani at his home for a meal after they visited the gravesite of Rabbi Menachem Mendel Schneerson, the rebbe of the Chabad-Lubavitch Hasidic movement.

And at the gala in March, Parnas and Fruman were honored with the Chovevei Zion, or Lovers of Zion, award. Frager says he gave the two men the award — among a larger group of honorees — so that they would donate to Young Israel.

But none of it resulted in a donation to Young Israel, Frager said. Beyond a contribution to defray some of the costs of the trip, the two men never opened their checkbooks for the synagogue association that gave them an award.

“I have not spoken to them at all,” Frager said, referring to the months since the gala. “I don’t know them at all. I did ask for a donation after the dinner and I didn’t get it.”

Frager said that a couple of weeks ago, before the Jewish holiday of Rosh Hashanah, he wished the two men a Happy New Year.

Fruman and Parnas also are members of the U.S. board of Friends of Anatevka, an NGO run by a politically connected Ukraine rabbi, Moshe Azman. Azman wants to create a refuge for Jews fleeing eastern Ukraine, where there is a conflict between Ukraine forces and Russian-backed separatists.

In May, Giuliani canceled a visit to Ukraine because of the controversy surrounding his advocacy that charges be brought against the Bidens. One of his Ukraine stops was to have been a benefit for Friends of Anatevka. Subsequently, Giuliani and Azman met in Paris.