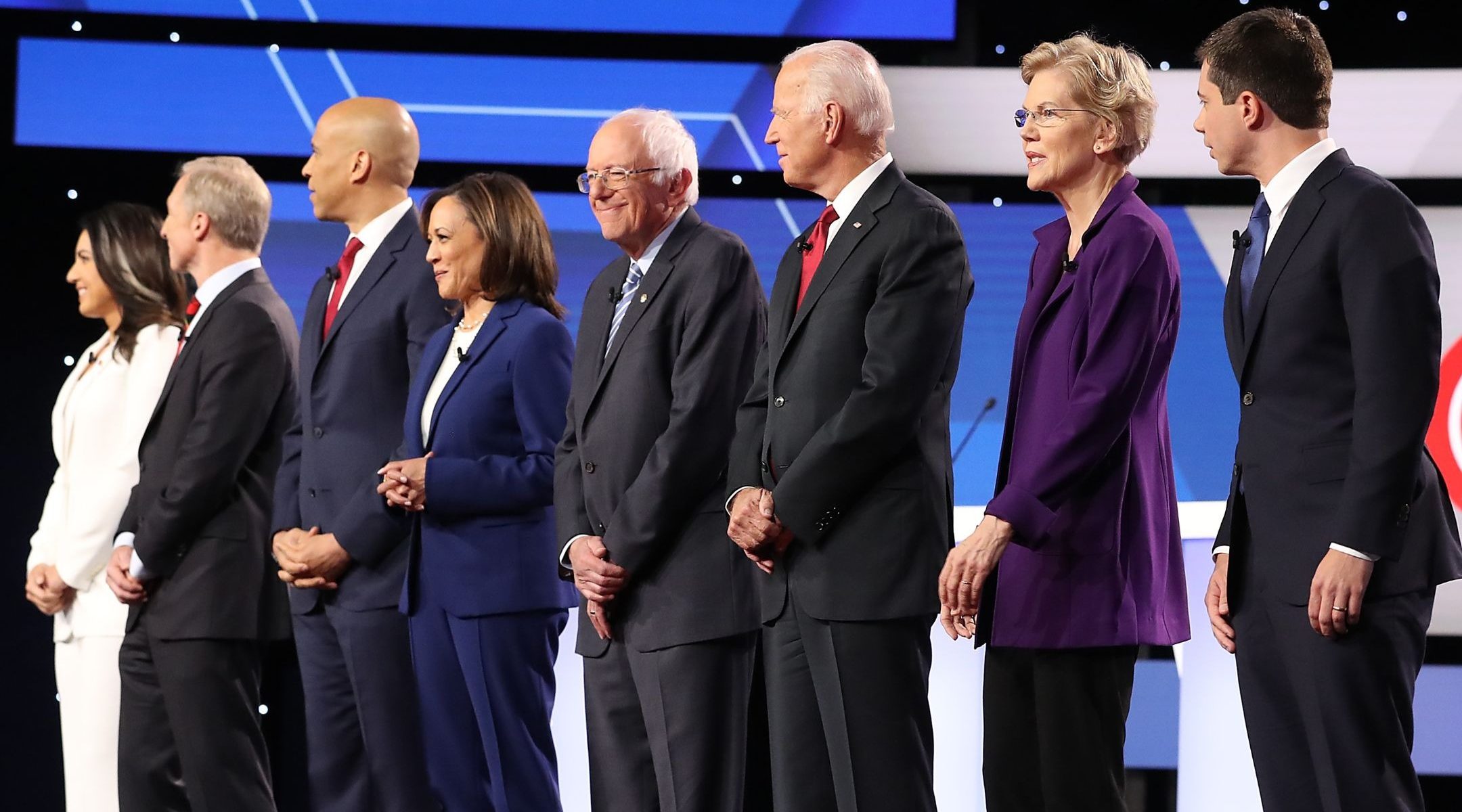 A record 12 Democratic presidential candidates stand before the start of their debate at Otterbein University in Westerville, Ohio, Oct. 15, 2019. (Chip Somodevilla/Getty Images)
Advertisement

WESTERVILLE, Ohio (JTA) — The fourth Democratic presidential debate revealed fissures among the candidates on whether to keep U.S. troops in the Middle East.

The 12 hopefuls on the stage Tuesday night at Otterbein University in this Columbus suburb were unanimous in describing President Donald Trump’s pullout of American troops from Syria as catastrophic for the Kurds, U.S. allies in the war against the Islamic State who are now at the mercy of Turkish forces who invaded northern Syria following the American departure. But they differed over whether U.S. forces should remain in the region.

Rep. Tulsi Gabbard, D-Hawaii, a veteran who in the past has sounded conciliatory toward the Syrian regime, blamed the carnage on “the regime-change war that we’ve been waging in Syria” and said the United States had backed terrorists in the country.

Sen. Elizabeth Warren, D-Mass., who is emerging as a front-runner in the race, agreed with Gabbard “that we ought to get out of the Middle East. I don’t think we should have troops in the Middle East.”

Pete Buttigieg, the mayor of South Bend, Indiana, who is also a veteran, lashed out at Gabbard.

Gabbard shot back: “So, really, what you’re saying, Mayor Pete, is that you would continue to support having U.S. troops in Syria for an indefinite period of time to continue this regime-change war that has caused so many refugees to flee Syria.”

“You can put an end to endless war without embracing Donald Trump’s policy, as you’re doing,” Buttgieg countered.

“The crisis here, as I think Joe said and Pete said, is when you begin to betray people, in terms of the Kurds, 11,000 of them died fighting ISIS, 30,000 were wounded, and the United States said, ‘We’re with you, we’re standing with you,'” said Sanders, I-Vt., who before Warren’s surge was the flag-bearer for progressives and a critic of U.S. involvement in foreign wars.

“And then suddenly, one day after a phone call with [Turkish President Recep Tayyip] Erdogan, announced by tweet, Trump reverses that policy. Now you tell me what country in the world will trust the word of the president of the United States?”

Klobuchar, of Minnesota, was the only candidate to note the impact on Israel of the rupture of the U.S. alliance with the Kurds.

“Think about our other allies, Israel,” she said. “How do they feel right now? Donald Trump is not true to his word when they are a beacon of democracy in the Mideast.”

Klobuchar and Castro also faulted Trump for pulling out of the Iran nuclear deal last year, saying it diminished U.S. influence abroad. The deal, which traded sanctions relief for a rollback of Iran’s nuclear program, was stridently opposed by Israeli Prime Minister Benjamin Netanyahu. Trump wants to negotiate a more stringent deal with Iran and has reimposed tough sanctions on the country.

Sanders, 78, addressed concerns about his health arising after his recent heart attack.

“Let me invite you all to a major rally we’re having in Queens, New York,” he said. “We’re going to have a special guest at that event. And we are going to be mounting a vigorous campaign all over this country. That is how I think I can reassure the American people.”

Toward the end of the debate, news broke that the special guest was Alexandria Ocasio-Cortez, the freshman congresswoman from New York who has become a leading progressive voice and is going to endorse Sanders for president. Ocasio-Cortez worked as an organizer for Sanders’ 2016 run.

Also endorsing Sanders were two other members of “The Squad” of freshman Democrats: Ilhan Omar of Minnesota and Rashida Tlaib of Michigan. Their support was notable as Warren surpassed Sanders in polling over the summer to become the leading progressive alternative to Biden. Recent polling is showing Warren pulling ahead of Biden as well to become the leading candidate overall.

Omar and Tlaib both back the boycott Israel movement and have been faulted for remarks seen as crossing the line into anti-Semitism. Sanders does not support a boycott of Israel, but upholds the right of other Americans to do so.

The fourth member of The Squad, Ayanna Pressley of Massachusetts, is the closest of the four to the pro-Israel community and has not yet endorsed Sanders.

Much of the first hour of the debate featured candidates targeting Warren, a consequence of her new front-runner status. Warren was criticized for not explaining how she would fund her “Medicare for All” initiative.

As in the previous debates, candidates charged that Trump’s blunt nationalism was fueling bigotry and right-wing violence. Harris, of California, lashed out at Warren for not endorsing her call for Twitter to suspend the president’s account.

“I would urge you to join me,” Harris said to Warren. “We saw in El Paso that that shooter in his manifesto was informed by how Donald Trump uses that platform, and this is a matter of corporate responsibility. Twitter should be held accountable and shut down that site.”

Warren avoided taking up the challenge, saying she preferred to use antitrust laws to break up tech monopolies.